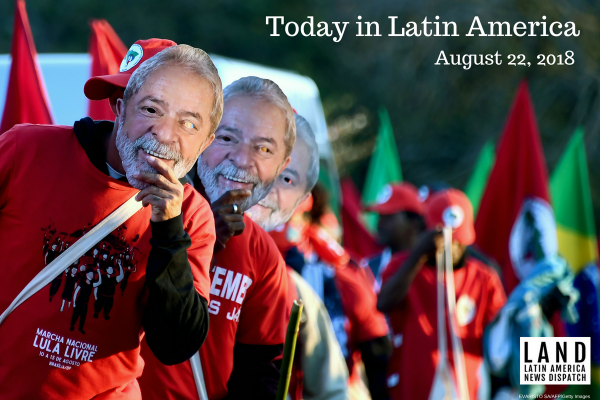 A poll by CNT/MDA published on Monday did not provide results for the probable scenario of Lula being barred from running, but found that almost half of his supporters would transfer their votes to his running mate Fernando Haddad. The second-runner continues to be far-right candidate Jair Bolsonaro with 18.3 percent, followed by environmentalist Marina Silva with 5.6 percent and business-friendly Geraldo Alckmin with 4.9 percent.

Meanwhile, Brazil’s currency has continued to fall against the U.S. dollar, dropping below $0.25 yesterday, probably because of uncertainty ahead of the presidential elections. The real has lost about 20 percent of its value in the past year.

CARIBBEAN-UNITED KINGDOM: The British government issued a formal apology to 18 Caribbean immigrants of the “Windrush generation” for wrongfully removing them or detaining them. The “Windrush generation” refers to immigrants who came to Britain from former colonies in the Caribbean following World War Two on the invitation of the government, and who before 1971 had an automatic right to settle but were not given proper documentation. Home Secretary Sajid Javid said that after a review of 11,800 cases the government had identified these 18 as those “most likely to have suffered detriment.” Amnesty International said apologizing to “just 18” people was “worrying” and “brings into question whether the Home Office has a realistic grasp on all the people it has wrongly detained and removed following the exposure of its appalling treatment of the Windrush generation”.

HONDURAS: The daughter of murdered activist Berta Cáceres accused the Honduran government of being unwilling to resolve her mother’s murder during a press conference held in Guatemala on Monday. Bertha Zúñiga, who now leads the environmentalist organization created by her mother, said that, among other improprieties, the General Attorney’s Office recognized in an official response that it never subjected to analysis more than two dozen electronic devices it seized. The trial will officially begin on Sept.10.

EL SALVADOR: Salvadoran authorities said yesterday that the decision to switch diplomatic alliance from Taiwan to China was due to trade advantages and denied having asked Taiwan for money in exchange for not switching as the Taipei government had suggested.

VENEZUELA: U.S. oil giant ConocoPhillips announced on Monday Venezuela’s state-owned oil company PDVSA agreed to recognize the judgment by an international arbitration panel ordering it to pay a nearly $2 billion arbitration award for seizing several oil projects from the U.S. oil company more than a decade ago. ConocoPhillips won the arbitration ruling in April and proceeded to seize PDVSA facilities on several Dutch Caribbean islands, seriously hampering the crisis-stricken country’s efforts to export oil. Under Monday’s agreement, Conoco will suspend legal actions to seize PDVSA’s facilities in the Dutch Antilles and Venezuela will make the first $500 million payment within 90 days and the rest over a period of four years.

BRAZIL: Public Security Minister Raul Jungmann said on Sunday that state agents were involved in the murder of Councilwoman Marielle Franco and that this was the reason bureaucratic hurdles and improprieties have slowed down the investigation. The District Attorney’s Office of Rio de Janeiro later announced it will change the team in charge of the investigation because there has been no progress five months after the fact.

ARGENTINA: Thousands rallied in front of the Parliament building yesterday to demand senators remove former president and current senator Cristina Fernández’ immunity from prosecution. The Senate is discussing today whether to allow a far-reaching probe on corruption during Fernandez and her late husband’s government’s to reach her but most parties are likely not going to support this. The Senate will likely pass a resolution that will allow a search of Fernández’ home as part of the investigation, she has already agreed to this.