Oversight or Dictatorship? The Sociopolitical Reality of Puerto Rico

Puerto Rico needs your help and the attention of the international community. Our democratically-elected government has been replaced by a control board, unilaterally designated by Congress. Now, a federal judicial resolution validated their absolute power over the Island, representing a new kind of colonialism to our country.

In 2016, the “Puerto Rico Oversight, Management and Economic Stability Act” (PROMESA) was signed into law by President Obama, leading to the creation of a Fiscal Control Board, which determines the priority of services of Puerto Rico’s government, as well as the imposition of severe austerity measures. Puerto Ricans did not vote for these board members. However, the board has supreme power—even over our constitution and elected government.

In an attempt to retake their position, the governor of Puerto Rico and the legislature filed a lawsuit, alleging the Control Board was exceeding its powers. The lawsuit was recently dismissed by federal judge Laura Taylor Swain. Her decision legitimates the powers of the Board, establishing that it is the Board who controls Puerto Rico’s budget, its distribution and that any legislation by the government of Puerto Rico needs the approval of the Board before it can be converted into law. This resolution perpetuates the territorial clause and the plenary power of the United States Congress over Puerto Rico.

The Board hijacks the local government, virtually turning it into a symbolic one. The austerity measures imposed by the Board go against the good health and efficient education in Puerto Rico. It also unequally decreases the wages of vulnerable families despite the fact that nearly three-quarters of the population already live under the poverty level.

The main purpose of the Board is to collect the debt, protect creditors and avoid additional costs to the U.S. Treasury. 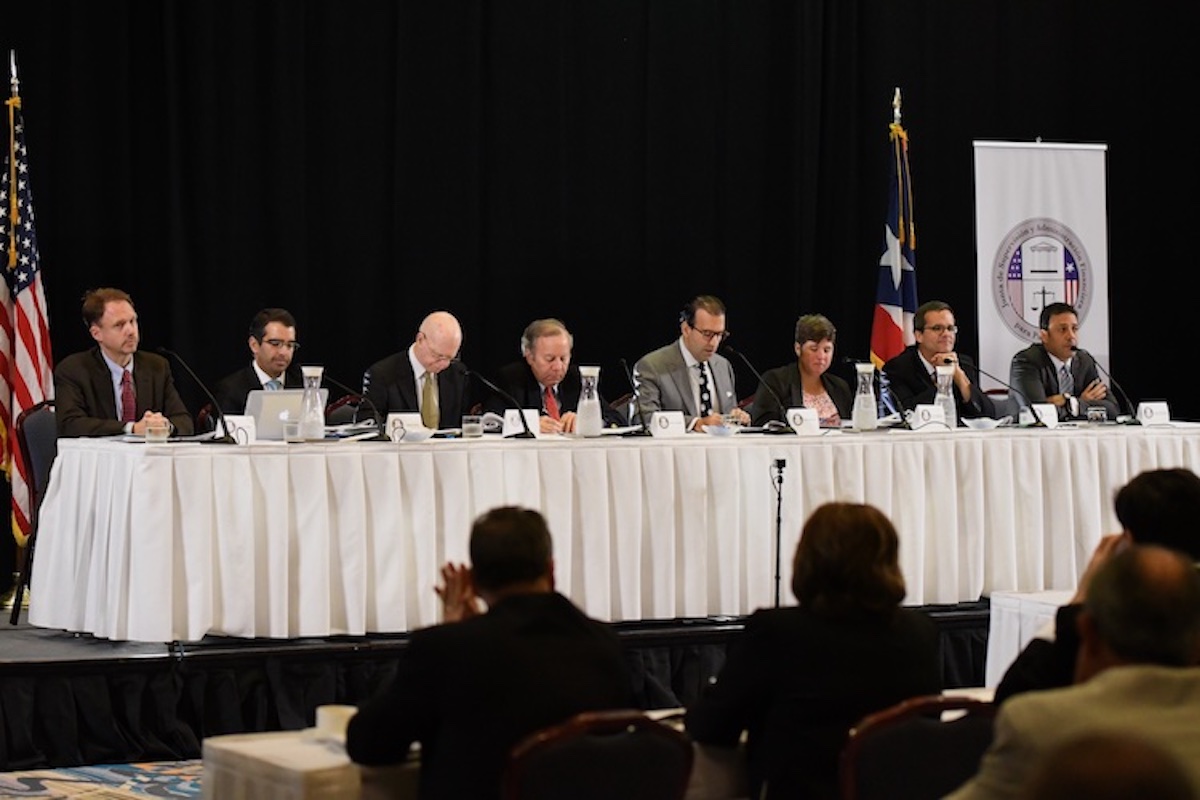 The first meeting of the Fiscal Control Board in 2016.

After the onslaught of Hurricane María, combined with austerity measures, Puerto Rico has been experiencing a stagnation in economic growth, a decrease in public services, an increase in poverty, underemployment, plus massive displacement and forced migration.

The models followed by the Board do not conform to the Puerto Rican social reality or human rights.

Nor does it recognize vital institutions that ensure a good quality of life for the population. It restructures working conditions threatening the physical and mental health of the Puerto Rican workforce. In addition, it imposes a new social structure and a government that corresponds to their financial intentions, while completely ignoring the real needs and well-being of the residents.

Given the complexities of the alleged public debt, most Puerto Ricans do not understand its nature or origin. In need of transparency, numerous popular requests have been made, asking for an audit that would bring to light the details of this debt, as well as the people responsible for this crisis. Unfortunately, all their efforts were denied by both the Control Board and the current government of Puerto Rico.

The country was already facing a financial crisis, and the storm only exposed what was an underfunded, decaying infrastructure. Rather than fiscal stimulus, the Board has brought austerity, cuts to workers’ retirement pensions, cuts to the healthcare system, the closing of schools and students attending the remaining schools lacking water or electricity, reduction in public workers sick days, vacation days and holidays. The derogation of laws that guaranteed employment security, a decrease in the number of public and government service agencies, as well as the privatization of national resources and public corporations.

While many Puerto Ricans are being forced to live with $1,000 a month, key decision makers in the political realm of Puerto Rico are an indignation to most people. The secretary of the Department of Education, Julia Keleher, responsible for the closings of almost 300 public schools, has an annual salary of $250,000 a year. The past president of the Electric Power Authority, Walter Higgins, was at $420,000. The executive director of the Fiscal Control Board itself, Natalie Jaresko, earns an annual income of $ 650,000. Ironically, none of them is of Puerto Rican origin or descent.

We are peaceful people and we are exhausted from surviving the worst storm of our history, still grieving and working hard in the reconstruction of our country. The Fiscal Control Board makes it impossible for us to raise Puerto Rico and set the road to self-determination. A dictatorship is an undemocratic act, an act unworthy of the U.S. government and an injustice against the people of Puerto Rico.

We need the attention of those who believe in social justice and human rights. I directly want to ask you to please engage with the cause and help spread the word, help us create a collective conscience on what is happening to the nation of Puerto Rico.

Hugo Marín González is a correspondent for the Pittsburgh edition of La Jornada Latina and also writes for infinitelexico.org. Hugo has a BA in Spanish linguistics with a concentration in Latin American and Caribbean dialectology.

2 responses to “Oversight or Dictatorship? The Sociopolitical Reality of Puerto Rico”