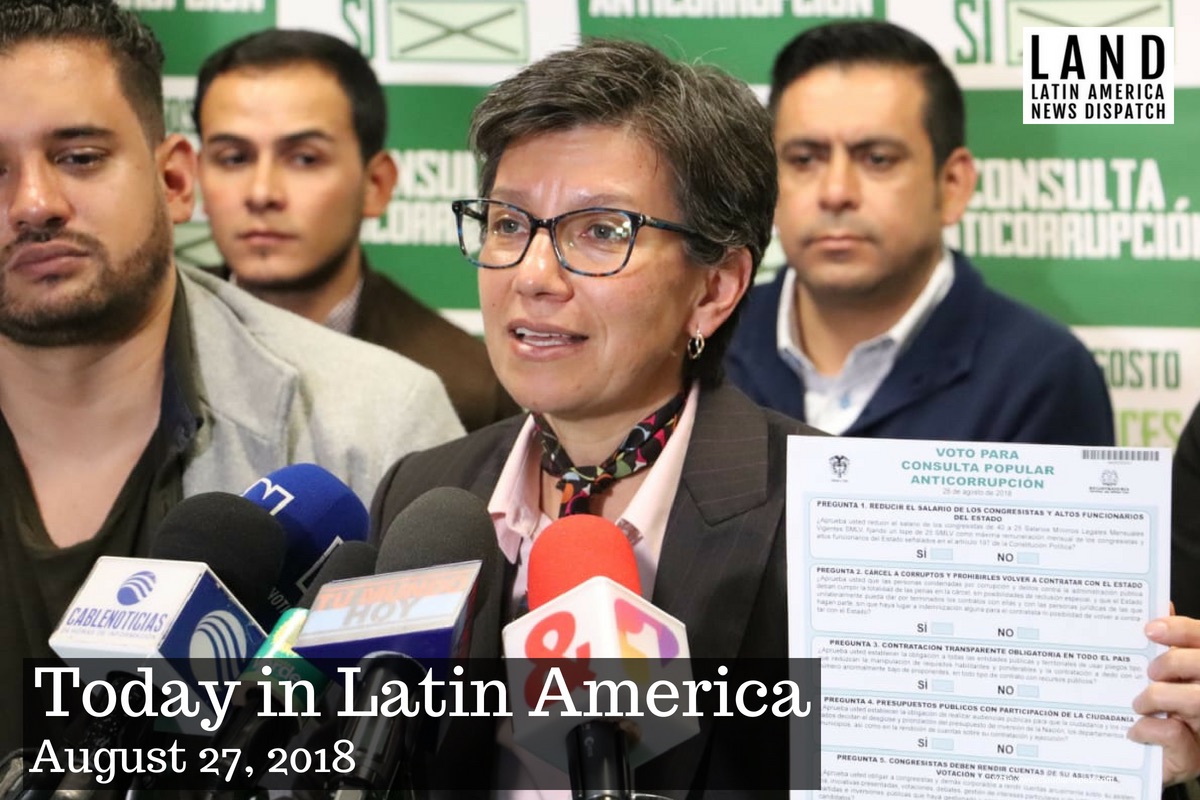 Former senator and vice-presidential candidate Claudia López was biggest the promoter of the anti-corruption referendum. (Photo from www.claudia-lopez.com)

COLOMBIA: An anti-corruption referendum held yesterday barely failed to meet the minimum number of votes required, although each of the seven proposals had more than 99% support. Nearly 11.7 million Colombians cast ballots, failing to reach the 12.1 million quorum of a third of the country’s 36.4 million eligible voters required. The proposed measures included a 40 percent cut to the wages of members of Congress, who earn more than what parliamentarians make in richer countries like France; bans on house arrest sentences for those convicted for corruption, who end up serving time in luxury apartments; forcing elected officials to publish their tax returns; and a three-term limit on local and national lawmakers.

The outgoing comptroller general, Edgardo Maya, said recently that corruption was costing the country more than $15 billion a year, equivalent to 4 percent of the gross domestic product.

The referendum would have forced Congress to adopt the measures within a year or President Iván Duque to sign them into law after that. After it failed to pass, one of the promoters, House Representative Angélica Lozano, said her Green Party will submit the proposals to Congress as bills. Duque had tepidly supported the referendum without actually campaigning in its favor, while the rest of his Democratic Center Party and his powerful mentor, former president and senator Álvaro Uribe, vehemently opposed it and proposed an alternate bill of anti-corruption measures instead.

MEXICO: The federal police freed 22 kidnaped Central American migrants, including eight children under the age of 18, yesterday in the southern state of Chiapas. The migrants said they had paid $790 per person to human smugglers known as “polleros” for safe passage from the southern border with Guatemala to the central Mexican state of Puebla, near Mexico City, but instead were held captive by the smugglers who demanded ransom money from their families. Authorities said the rescued migrants were living in “inhumane conditions,” showing signs of malnutrition and respiratory illnesses. Two people were arrested and nearly 400 kilos of cocaine were found during the raid.

PUERTO RICO: The financial oversight board is “recommending” that governor Ricardo Rosselló rescind an executive order setting a minimum wage of $15 per hour for those performing work for federally funded construction projects. The board said it is “concerned about the impact” on “private sector employment” and that “the more prudent course would be to let the market dictate wages.”

NICARAGUA: The Inter-American Commission on Human Rights asked on Sunday that the government of President Daniel Ortega respect its citizens’ rights to protest and free speech after 28 people were arrested during anti-government rallies during the weekend. Twenty-two of those arrested have already been released and it is expected that a Brazilian-American documentary maker who was among those arrested will be deported today. Meanwhile, on Thursday, Ortega named Francisco Díaz as National Police director, a high-ranking officer sanctioned by the United States for alleged abuses against protesters.

COSTA RICA: Hundreds of people marched through the streets of San José in solidarity with Nicaraguan immigrants fleeing months of unrest in their home country and to reject an anti-migrant demonstration a week ago that used Nazi imagery and ended in clashes and arrests.

VENEZUELA-ECUADOR-PERU: On Friday, a judge in Ecuador suspended for 45 days a requirement for Venezuelan migrants to present a valid passport at the border crossing, which had come into effect a week earlier. President Lenín Moreno’s administration said it respects Judge Judith Naranjo’s decision but announced Venezuelan migrants will now need to present a “certificate of validity” along with their national ID cards.

This certificate can be issued by the Venezuelan government or by regional or international organisms. During the past week, Ecuadorean authorities had created a “humanitarian corridor” of 35 buses helping Venezuelan migrants move from its northern frontier with Colombia to its southern frontier with Peru before a similar passport requirement by Peru came into effect on Saturday. To date, 80 percent of Venezuelans who have entered Peru have done so with a passport, according to migration data. The International Organization for Migration, a United Nations institution, said on Friday that the exodus of migrants from Venezuela is building toward a “crisis moment” comparable the situation of refugees in the Mediterranean and urged governments in the region to ease entry for Venezuelans.

CHILE: On Friday, the Supreme Court ordered the seizure of more than $1.6 million from the late dictator Augusto Pinochet after finding that $17.8 million of his assets were embezzled from public funds. The funds that will be seized were the only that escaped statutory limits. Three former military officers were sentenced to four years in prison —but allowed to remain free under conditional liberty— for helping the former dictator steal the money. Pinochet’s supporters praised him for a supposedly austere, corruption-free government in spite of his record of widespread human rights abuses. But in 2004, a U.S Senate committee investigating money laundering and financing of international terrorism by the Riggs Bank of Washington found secret accounts belonging to Pinochet, leading to the opening of the current investigation in Chile.

BRAZIL: A major country-wide police operation led to the arrest of 1,027 people for different crimes on Friday. Authorities said Operation Cronos focused on murders and violence against women, but only 157 of the arrests were for such crimes, including 14 for femicide.