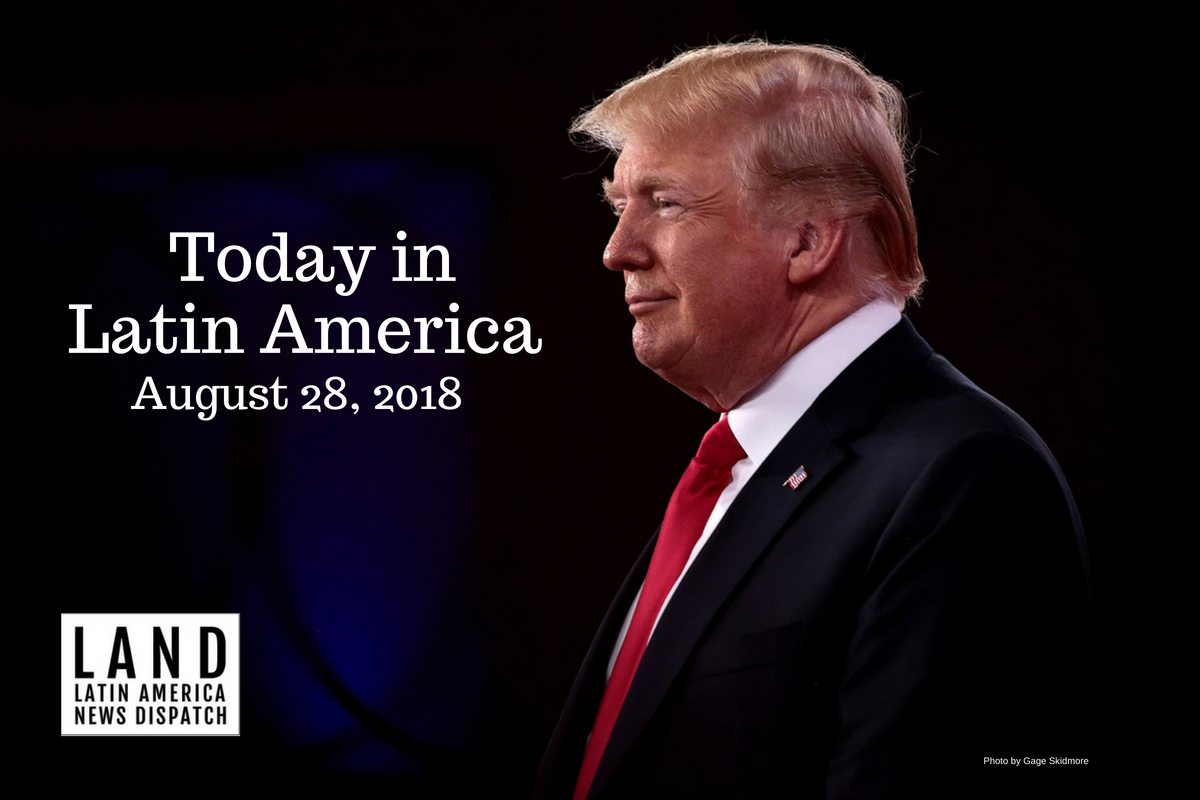 MEXICO-UNITED STATES-CANADA: U.S. President Donald Trump announced yesterday that the United States and Mexico had reached a preliminary accord to replace the North American Free Trade Agreement, possibly leaving Canada out of the deal. Trump said he wanted to call the pact “the United States-Mexico Trade Agreement” because NAFTA had earned the reputation of being harmful to U.S. workers. Trump said the new agreement was a “really good deal” and “much more fair” than the previous version.

Negotiators appear to be aiming to agree on a new deal before the newly-elected Mexican president, Andrés Manuel López Obrador, takes office in December, possibly because he is reluctant to continue current president Enrique Peña Nieto’s policy of opening up Mexico’s energy sector. The Trump administration must present Congress with a deal at least 90 days in advance, which means the deadline is this Friday.

Trump threatened to hit Canada with auto tariffs if it did not “negotiate fairly,” but many U.S. lawmakers criticized leaving Canada out of the agreement, saying that it might not be legal and that it would affect companies that depend on trading between all three countries. Peña Nieto said that he wanted to have Canada back in the process but his foreign minister Luis Videgaray Caso added that “there are things that we don’t control, particularly the political relationship between Canada and the U.S., and we definitely don’t want to expose Mexico to the uncertainty of not having a deal.” Canadian Foreign Minister Chrystia Freeland cut short her diplomatic trip to Europe and will be flying to Washington today.

MEXICO: President Enrique Peña Nieto suggested his party, the PRI, should consider changing its name after the catastrophic election defeat showed “the erosion and rejection of the PRI as a brand.” Since its creation in 1929, the party held the presidency until 2000, then after two terms out of power, it regained control in 2012. But this year, it placed third in the presidential elections. It will now be the third-largest force in the Senate and the fifth-largest in the lower house of Congress. It would not be the first time the PRI, which stands for Institutional Revolutionary Party, changed its name. Originally known as the National Revolutionary Party, it changed to the Party of the Mexican Revolution in 1938 and took its current name in 1946.

JAMAICA: The Supreme Court ruled that a primary school in a suburb of Kingston that had banned a five-year-old girl from attending unless she cut off her dreadlocks, has to allow her into class in September. The girl’s mother had refused to cut her daughter’s locks, which she had been growing since she was one, saying it was against the family’s beliefs. The NGO Jamaicans for Justice filed a constitutional challenge on the girl’s behalf, saying the school was limiting her freedom of expression, her right to public education and the right to humane and equitable treatment by a public authority.

HONDURAS: President Juan Orlando Hernández will not attend the national dialogue being held today to resolve the political crisis sparked by the allegedly fraudulent November 2017 elections. Minister of the Presidency Ebal Díaz, who will attend the meeting on Hernández’ behalf, said the president “does not have space in his agenda.” Electoral observers from the United Nations and the Organization of American States said that the 2017 Honduran elections were so fraught with irregularities that it was impossible to determine who was the winner. At the time, the contested elections were followed by several weeks of protests, where at least 32 demonstrators died.

VENEZUELA-PERU: Ninety-seven Venezuelans took up their government’s offer to return home from Peru after facing xenophobia and increasing difficulties finding decent paying jobs, as more of their compatriots continue to arrive. The initiative, called “Return to the Homeland,” was announced by Venezuelan President Nicolás Maduro earlier this year and pales in comparison to the 4,000 people who are leaving the country every day. Migration officials from Colombia, Ecuador, Peru and Brazil are due to meet in Bogotá later this week to coordinate a regional response to the exodus.

PERU: Indigenous protesters against China-owned miner MMG Ltd blocked a highway nearly a week ago to stop copper from being transported out of the massive Las Bambas mine in the south-central Apurímac region. Families from the indigenous village of Nueva Fuerabamba are demanding the company compensate them for the use of the road that runs through their community’s farmland which they say was built without consulting them and was illegally seized by the government in May by making it a state highway. The conflict between the Las Bambas mine and the surrounding communities is not new. Four local men died during protests in 2015 and 2016, and the village of Nueva Fuerabamba filed a lawsuit against the company in June seeking $46 million for not delivering on its obligations after the village was relocated to give way for the mine.

ARGENTINA: Former president and current senator Cristina Fernández said that the domestic employees cleaning her apartment after investigators searched it for evidence of her participation in a corruption scheme, became mysteriously ill and had to be taken to hospital. A statement by her lawyer that she posted on her Facebook page said that the cleaning staff were suddenly affected by “dizziness, strong itching in the throat and eyes and breathing difficulties” and that “It was found that the ailments were caused by contact with a toxic substance.” The statement added that Fernández has decided not to return to the apartment until it is examined.

PARAGUAY: Police officers found that 42 powerful rifles had been stolen from the police armory in the city of Capiatá and replaced with toy wooden and plastic replicas. An investigation began when old police rifles that had been replaced by newer models started appearing on the black market a year ago. The rifles had been put into storage but were still in working order.