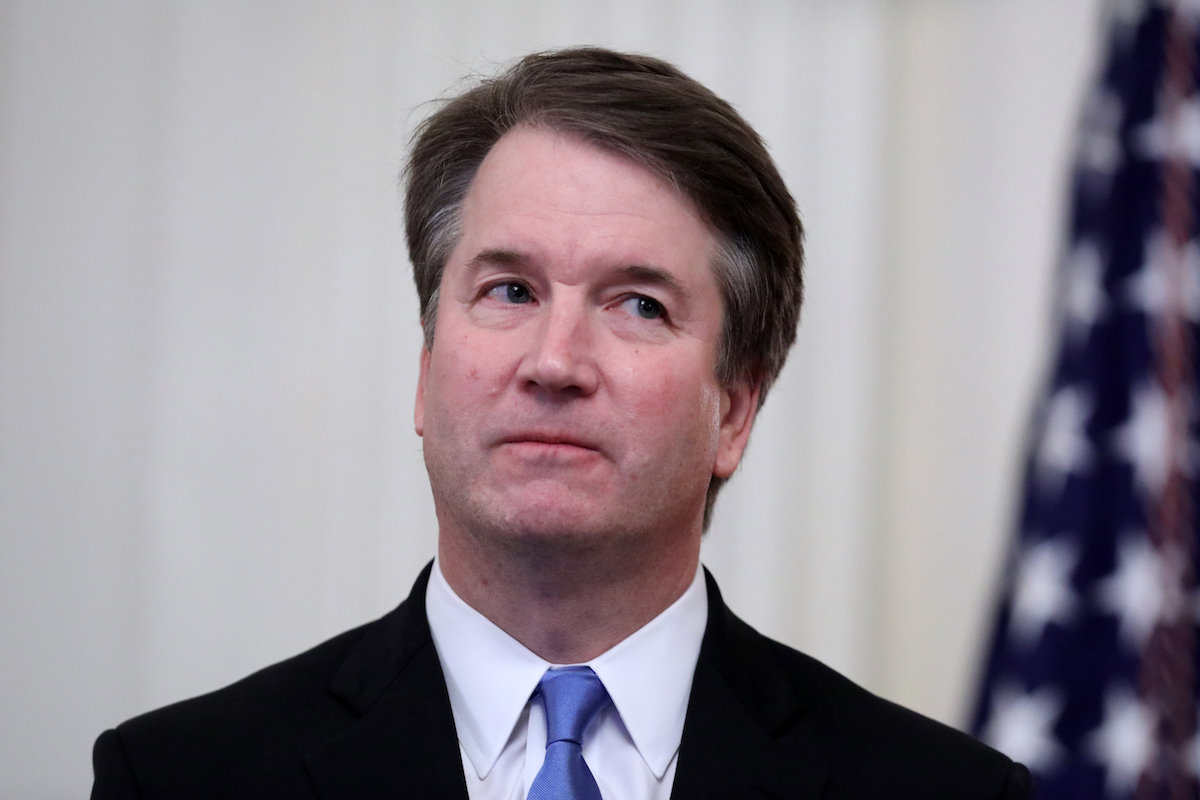 The confirmation of a Supreme Court nominee accused of sexual assault has blown up into the biggest flashpoint yet in the ongoing #MeToo movement. Among those who supported Brett Kavanaugh’s confirmation, a common defenses against Dr. Christine Blasey Ford’s accusation has been to warn of a precedent where accusations alone derail careers. As Senator Lindsey Graham put it: “What am I supposed to do? Go ahead and ruin this guy’s life based on an accusation?”

But there is one large and distinct group of men whose lives have always been easily ruined by simply an accusation. There is one group of male teenagers that this country has not found any trouble holding accountable for their actions, even when the punishment is disproportionate to the crime. Men of color have long been characterized as a threat, and as a threat to women, especially white women, in particular. How that fraught history is reconciled with the current reckoning with the abuse of sexual power dynamics is a question in need of addressing.

On August 21, 2018, the body of Mollie Tibbetts, a 20-year-old student at the University of Iowa, was found in a cornfield. Police had been lead there by the lead suspect in the killing, 24-year-old Cristhian Bahena Rivera, a farmworker originally from Mexico.

Sure enough, not even 24 hours had passed before the President of the United States himself took to claiming Mollie Tibbetts as a sort of martyr of his America, a victim whose death justified any and all cruelty towards Latino communities.

“You heard about today with the illegal alien coming in, very sadly, from Mexico and you saw what happened to that incredible, beautiful young woman,” Trump said back then. “Should’ve never happened. Illegally in our country. We’ve had a huge impact, but the laws are so bad, the immigration laws are such a disgrace. We’re getting it changed, but we have to get more Republicans.”

This rhetoric had a real impact: Latino festivals in Iowa were cancelled due to safety concerns. (That the backlash against the entire Latino community did not get worse is solely due to Tibbetts’ family, which pushed back hard against the scapegoating of Latinos. One shudders to think what might have happened if an already prejudiced family that had lost their daughter.)

A lawyer for the Bahena Rivera, would later dispute the government’s claim that his client was in the country illegally. Indeed, it appears that the alleged killer was employed on the farm of a prominent Iowa Republican family, serving as another reminder of just how dependent Trump’s beloved rural America is on Latino immigrant labor.

But the most damaging part of the story remained: A young white woman had been killed by a man of color. And so the same nation that is unwilling to hold the likes of Donald Trump or Brett Kavanaugh accountable for their actions finds no problem holding not just Bahena Rivera accountable, but his entire ethnic group.

Reactions to Tibbetts’ tragic murder followed an old script. Throughout American history, there is little else that triggers the racial and gender anxieties of White America as violence by a man of color towards a white woman. Cases that seem to fit these narratives have led to innocent men of color being assumed guilty.

In 1989, the sexual assault of a white woman in New York’s Central Park saw an entire city (and a future U.S. President) ready to believe the worst of five Black and Latino suspects, all of whom were later proven innocent. And regardless if the men of color accused were genuinely guilty or not, the backlash has often been felt by the entire community.

An alleged assault of a white teenager by a black man sparked the Tulsa race riot in 1921, one of the worst outbreaks of white supremacist violence in the 20th century.

There is a reason that anxiety over white women’s safety consistently motivates white male violence. In a brilliant essay reflecting on the sexual anxieties sparked in Europe during the refugee crisis, Abi Wilkinson termed this dynamic “the White Knight delusion.” The threat posed by men of color is the supreme justification for patriarchal white supremacy in the racist imagination.

It is because men of color are a threat, particularly a sexual threat, that we must be kept down, kept segregated, or on the other side of a border wall. If Latino men are indeed a violent, sexual, murderous threat, then society, white women in particular, need someone like Trump to protect them from us. (How convenient for a man who has himself been credibly accused of multiple sexual assaults.)

Yet despite this racist narrative being arguably the very foundation of patriarchy, many white women have long found ways to benefit from it—and weaponize it to their own ends.

Men of Color and #MeToo

The consequences of this racial and sexual hierarchy for women of color are clear and grim. Women of color have always suffered the most from the ceaseless attempt to control female bodies. But less discussed, though instinctively understood, are the consequences of this racist patriarchy for men and boys of color. Walk through the world being constantly perceived as a potential threat is an experience almost unique to men of color. When Donald Trump speaks of the “rapists” that Mexico is “sending,” the image conjured is one of men. The impact this has on young men and boys of color, from school discipline to interactions with police, has been catastrophic.

I have been thinking of this reality at length since the MeToo movement began. I have learned to believe all victims. I have seen up close the hurt it causes when belief, and the basic dignity that accompanies it, is withheld from survivors. And yet I confess a certain discomfort with any narrative that could be weaponized to further criminalize men and boys of color, in a country where the worst is readily believed of them. As we transition to a much-needed new paradigm governing accusations of sexual assault, where does race fit into the puzzle?

Consider that is currently disproportionately men of color being expelled for sexual infractions on college campus. Is it true that our behavior is simply worse? Richard Spencer would surely make that argument. But I’d be willing to bet that there is some racial bias at play there. One explanation is that there are many guilty and privileged white men —the Brett Kavanaughs of the world— getting away with sexual assault.

But the #MeToo movement must make room for stories such as Emmett Till’s, where a false accusation by a white woman led to the lynching of a 14-year-old boy. The white woman in question, Carolyn Bryant Donham, has admitted her story was a lie. This story is proof that, however outlandish it may seem, there have been outright lies meant to destroy lives. History suggests that whether out of social pressure, genuine fear, or simply hatred, race has been a powerful motivation for some to do the unthinkable and accuse the innocent.

That’s a knowledge that’s long hung over my own interactions with women. I remember distinctly being told by a white female partner that her father “hated Mexicans” and “would lynch you if he found out.” At the time, I did not know what to make of this. But now I wonder, does this not create its own power dynamic, not entirely unlike a boss locking their office door?

Afraid of Each Other

There are so many complexities here. Men of color can of course clearly be abusers, rapists, and misogynists. Bill Cosby, Clarence Thomas and Cristhian Bahena Rivera remind us of this. Women of color know that better than anyone. The #MeToo movement should not hold back on calling out men of color, especially those in powerful positions, who assault people or abuse their power over others for their own gratification. I know women of color who have hesitated to call out abuse or seek justice for sexual harassments for fear of contributing to the criminalization of our communities. It’s an open question: how do we balance the fact of persistent sexual abuse and assault within our communities while also pushing back against the societal perception of Latino men as a threat?

I do not have easy solutions. It is clear that men of color must be feminist. The fight for racial justice and the fight for gender equality go together. Our causes are all intertwined, not just in their dedication to justice, but also in the root causes of the injustice they seek to address. The patriarchal desire to control women is what underwrites so much racial violence throughout our history, and what necessitates the imagining of men of color as demons. The demonization of men of color harms women of color, a reality that has long been understood by women of color themselves. After all, despite the rhetoric of “rapists” that conjures a specifically male threat, Trump administration policies towards immigration have often fallen hardest on women.

But while it’s easy to agree that Trump and everything he represents are a common enemy, we must also be clear there are some conflicting interests. As Mollie Tibbetts’ death, shows even white women who in no way wished to be part of these structures of oppression have a value placed on their life that can unleash a very real violence against communities of color. The Ford/Kavanaugh hearings have unleashed a wave of female anger, and that anger can shape laws and policy. White women, despite narrowly breaking for Trump in 2016, are increasingly being seen as the crucial swing vote that will restore the House of Representatives to the Democrats.

But I confess: a small part of that anger scares me. Because while the anger may be primarily or at least equally directed at men like Brett Kavanaugh, it will always be the men and boys without resources, without society’s protection, who will be hit hardest. For while #MeToo is, and must remain, about survivors of sexual assault, these movements do not occur in a vacuum removed from history or other social hierarchies. I would humbly ask that white women in particular acknowledge the power dynamics that exist between them and men of color, and the full force of racial violence that stands ready behind them.

Antonio De Loera-Brust is a Mexican-American writer and filmmaker from Davis, California. He has a degree in film production and Chicana/o studies from Loyola Marymount University in Los Angeles. He was a Joseph A. O’Hare S.J. fellow at America Magazine, based in New York City. He is a U.S. politics and international soccer junkie. He loves tacos, history, and the outdoors, and writes about diversity, farmworkers, and politics. You can follow him @AntonioDeLoeraB.