Who Is Really Mobilizing Latinos in This Election? It’s been argued that Latino voters are poised to shape the outcome of the 2018 midterm election if political parties and candidates engage them in a meaningful manner. While political parties and candidates are critical sources of political mobilization, they are not the sole facilitators of Latino civic engagement. Social scientists also stress the significance of family, community and social networks in activating political activism. To what degree is this form of mobilization taking place in Latino communities? Moreover, in this election, like previous ones, Latinos are being mobilized to engage in politics in varied and important ways. This analysis also considers the diverse ways in which Latinos are participating in politics during this midterm election.

Voter mobilization efforts take many forms and come from a wide-range of sources. Initially, scholars emphasized the importance of political parties, as they had the organizational capacity to engage in large-scale and sustained mobilization campaigns. As political parties began to wane in power, candidates and their campaign strategies received greater attention. Presently there is growing interest in the role of social networks in spreading political information and encouraging political engagement. The general consensus of this research is that family, friends and community are critical in fostering political participation. If that is indeed the case, then we must consider the degree to which Latinos are encouraging each other to participate in politics. For this analysis, I draw on the results of the 2018 and 2016 Latino Decisions/NALEO tracking polls, which included questions on whether respondents were encouraging friends and family to register or vote. The polls allow us to comparatively assess whether this political activity is increasing, decreasing or remaining constant across elections. 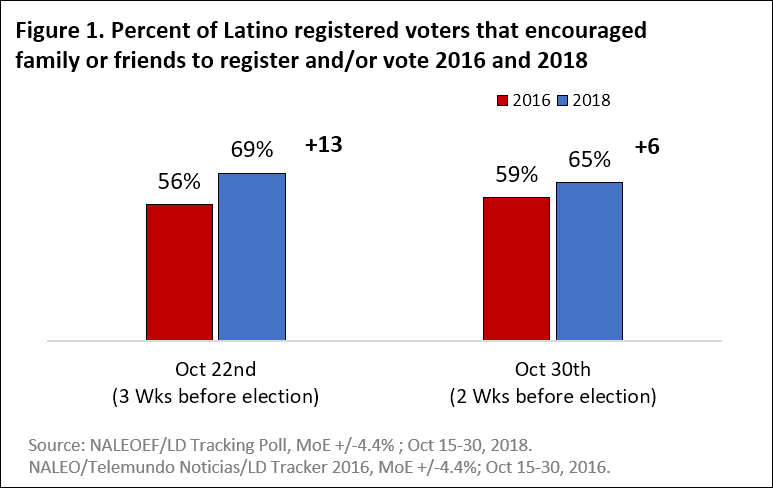 In the final three weeks leading up to Election Day, we asked respondents if they had encouraged “friends or family to register or vote”. The first thing we notice is that the number of Latinos mobilizing friends or family is higher in 2018 than in the 2016 election. This year, an average of 67% of Latinos said they were mobilizing friends and family, while two years ago at this point in election season, an average of 58% engaged in this activity. (Note that in 2016, contacting family and friends peaked at 62% the week before the election, already exceeded in 2018.) These results are surprising given that political interest and turnout is usually higher during presidential elections. Clearly, Latinos are highly energized and are encouraging others to vote despite this being a midterm election year.

Beyond encouraging others to vote, Latinos are also participating in politics in diverse ways. The 2018 tracking poll allows us to investigate Latino participation in six distinct political activities (see Figure 2). 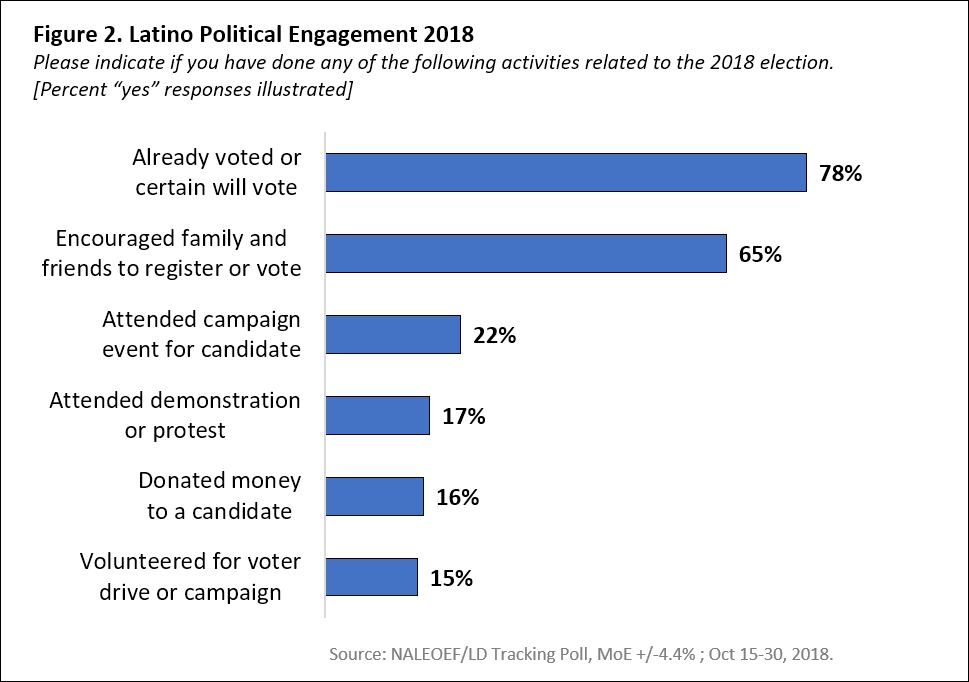 Voting is clearly the most important political activity for the majority of Latinos. Among registered voters, over three-quarters (78%) say they have voted or are almost certain to vote in this election. This figure alone should dispel any illusion that political apathy is pervasive among Latinos. Yet, Latino political activism is not limited to voting. I have previously noted that large numbers of Latinos are encouraging others to vote. A smaller number report that they have attended a campaign rally (22%), participated in political protests (17%), made campaign donations (16%) and volunteered on behalf of a candidate (15%). While these rates may seem low in comparison to voting or encouraging others to vote, Latinos tend to engage in these activities at higher rates than other segments of the electorate, including non-Hispanic Whites. Overall, the results of our polling data are encouraging as they reveal a politically committed Latino electorate.

With the 2018 midterm election less than a week away, the media and pundits have focused their attention on Latino voters and are asking if they will turn out to the polls in significant numbers. The results from the Latino Decisions/NALEO tracking poll leave little doubt that the answer is yes. While the lackluster mobilization efforts of political parties have received a great deal of media attention, our survey demonstrates that the sources of get-out-the-vote campaigns can be diverse. Indeed, the data show that Latinos are doing some heavy lifting when it comes to encouraging members of their community to participate in politics. Latinos are also doing their part in supporting parties and candidates by making political donations, attending rallies and canvassing. In short, the projected high rates of voter turnout among Latinos is not merely the result of external social forces, such as a hostile political climate or mobilization through parties and candidates. High rates of political engagement are also driven by internal social forces such as friends, family and the wider Latino community. Far from being passive in the face of relentless political attacks, Latinos are eager to respond to those assaults this November.

Methodology. On behalf of NALEO Educational Fund, Latino Decisions interviewed 500 Latino registered voters nationwide from August 28–September 3, 2018 and carries of margin of error of 4.4%. Each week, for the next nine weeks, a fresh sample of 250 registered voters is added and combined with the previous 250 interviews to create a rolling average for each week, consistent with most tracking polls methodology. Respondents were randomly selected from Latino Decisions partner web panels and confirmed to be registered to vote. The survey was self-administered and available in English or Spanish at the discretion of the respondent. Data were compared to the best-known estimates of the U.S. Census Current Population Survey (CPS) for demographic profile of Latino registered voters and weights were applied to bring the data into direct balance with Census estimates.