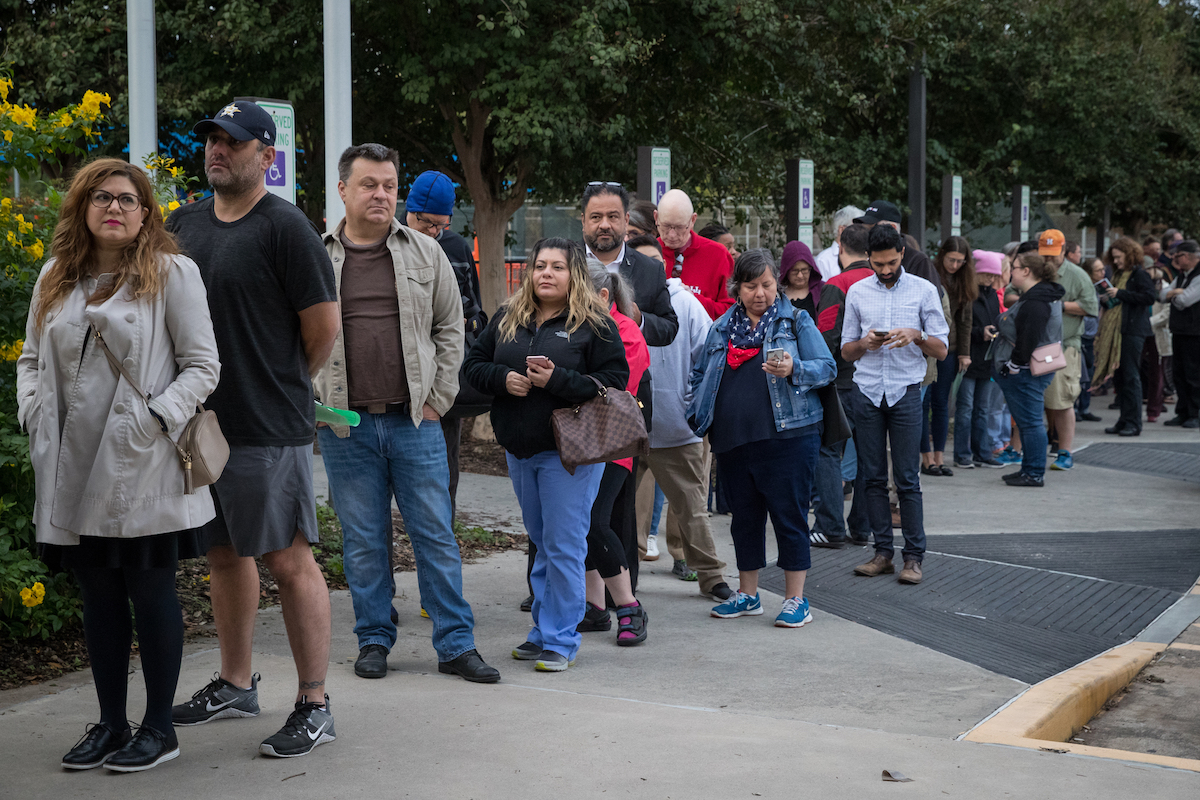 People wait in line to vote at a polling place on the first day of early voting on October 22, 2018 in Houston, Texas. (Photo by Loren Elliott/Getty Images)

Employing data collected over the course of nine weeks of the NALEO Educational Fund/Latino Decisions Weekly Tracking Poll, LD Vote Predict estimates that 76% of Latinos voting for congressional candidates from one of the two major parties will cast their votes for a Democrat, with just 24% voting for a Republican. Accounting for several sources of uncertainty —most consequentially, the yet-to-be-determined population of actual voters and the vote choice of voters who claim to be undecided, as well as the usual sampling error— we predict the Democratic party share among Latino voters will fall somewhere between 72.2% and 79.8%.

While this is the first time Latino Decisions is applying these models to midterm elections, these figures appear to represent an increase from previous Democratic Latino share as expressed in polls and analyses by other organizations (e.g. Pew Research). As we have discussed at length elsewhere, analyses based on exit polls tends to be highly unreliable with respect to Latino voters.

Notably, Cuban-Americans, long a reliable source of support for Republican candidates, will split their vote (50.5% Democrat, 49.5% Republican), continuing a trend away from earlier Republican dominance over the past several election cycles. Meanwhile, Puerto Ricans living in the 50 states and those of primarily Puerto Rican ancestry, are expected to cast 76.9% for Democrats and 23.1% for Republicans. Both groups are expected to be of special relevance to close votes in Florida. Overall, Florida Latino voters are expected to vote 60%–40% for Democratic congressional candidates, a figure that may have implications for gubernatorial and senate races in that state.

With 62.6% of registered Latino voters predicted to cast ballots this Election Day, this turnout would represent a substantial increase over 2014 turnout levels (52.7%), the most recent midterm election. Voting among registered Latinos will return to and likely slightly surpass earlier midterm voting levels on record (60.1% in 2006 and 60.5% in 2010, according to Census figures through the Current Population Survey). The impact of these voters will depend in part on the growing number of Latino eligible voters and the degree to which they are registering to vote. In general, new registrations among all eligible voters are less numerous in midterm than presidential election years, but heightened attention to immigration and border security as well as racially-charged rhetoric by President Trump when discussing immigrants, refugees, and asylum-seekers —Mexicans and Central Americans in particular— may inflate these figures as well.

The basic approaches of LD Vote Predict and LD Turnout Predict have been described in previous posts and applied to presidential elections in 2012 and 2016. This is the first time that Latino Decisions has applied these forecasting models to midterm elections. The relationship between survey responses/previous voting behavior and actual likelihood that a respondent will vote is estimated from previous polling data and validated voting records. Likewise, the probability that an individual will vote for a Republican or Democratic congressional candidate is based on their stated intention, in addition to other variables that have been demonstrated to be highly predictive of vote choice.

The relationship between these predictors and actual vote, (assuming a person indeed casts a vote), has been estimated from previous polling data and follow-up calls after the election. So instead of restricting our attention to only “likely voters” and those who have already decided for whom to vote, we consider the responses of registered Latino voters, and estimate the probability that they will vote and if so, for whom. Furthermore, we allow for differences in voting patterns among those of different levels of commitment and enthusiasm for their favored candidate. This allows us to generate estimates of the eventual Latino voting population based on rigorous probabilistic reasoning: Each registered voter has a particular probability of turning out to vote and then a probability of casting a vote for each candidate should they vote at all. While these probabilities are latent (i.e., unobservable), LD Vote Predict and LD Turnout Predict model these probabilities according to the historical relationship between individuals’ survey responses, demographics, and past voting record on one hand and validated vote and post-election declaration of their vote choices, on the other.

While past elections teach us about how to use respondents’ answers to project their turnout and vote, it is important to note, that we do not assume turnout patterns will closely track previous elections.