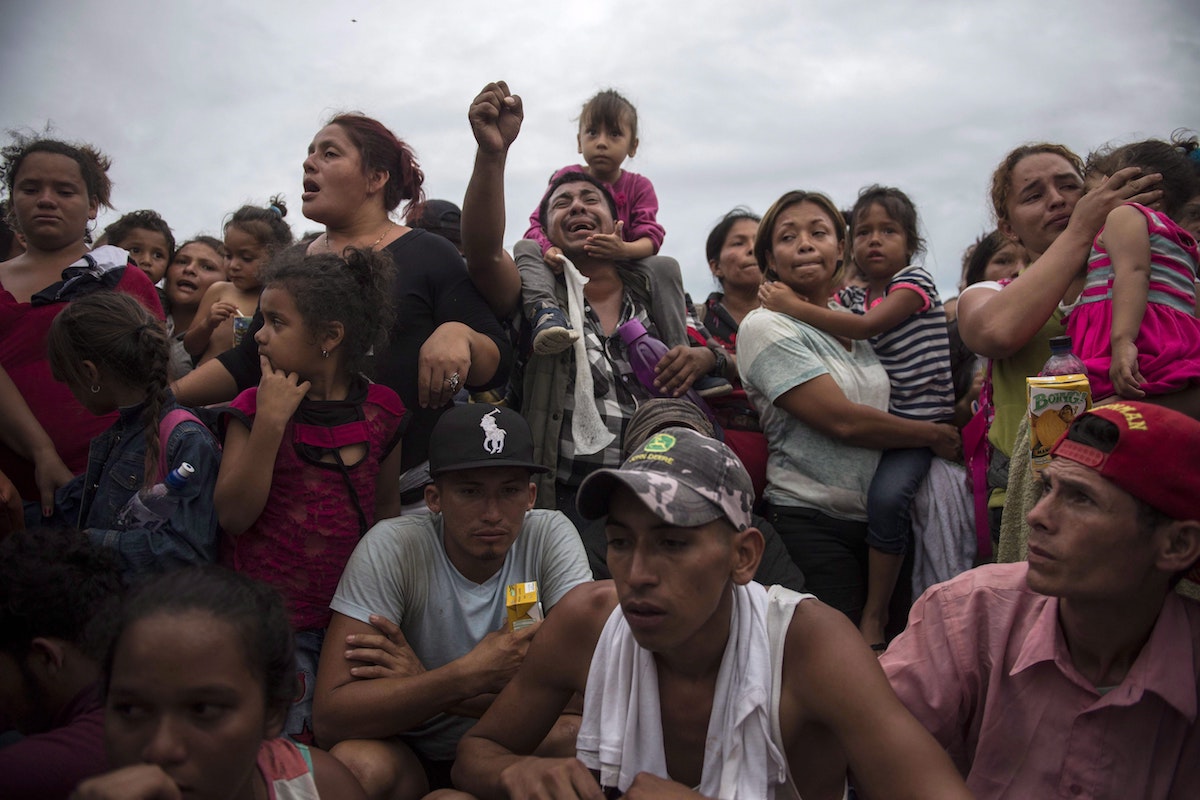 A photograph by Oliver de Ros presents a different impression of the migrants at the Guatemalan border than the standard tropes published. Migrants bound for the U.S.-Mexico border wait on a bridge that stretches over the Suchiate River, connecting Guatemala and Mexico, Friday, October 19, 2018. (AP Photo/Oliver de Ros)

The “caravan” of thousands of Central Americans currently traveling through Mexico has become a touchpoint for U.S. President Donald Trump’s anti-immigrant rhetoric. This group, made up primarily of Hondurans, but including people from other countries in the Northern Triangle, left San Pedro Sula on October 13, 2018.

They are fleeing abject poverty, violence, extortion and the threat of forced recruitment into international gangs. People are travellng together because the company of others provides some protection from the usual dangers they would face as undocumented migrants in Mexico. On their own they would be targeted both by criminal organizations, who are involved in kidnapping and human trafficking and by Mexican officials who beat, rob and apprehend migrants, as well as collude with the cartels.

While the conditions themselves are not new, the heated political response makes the current situation more concerning than ever.

When mainstream news agencies report on Central American migration, they frequently use a series of visual tropes to turn complex issues into predictable narratives. Editors often select formulaic photographs from subscription news agencies to illustrate stories. Many of these borrow from religious iconography or draw on stereotypes to portray the displaced.

The images shape readers’ understanding of stories, often without their awareness. In my research into representations of 21st-century global migration, I have identified a series of recurring tropes.

Here I concentrate on two images that media have used in coverage about the current “caravan” of Central American migrants: one; a group of people on the move and two; the disorderly crowd. This story discusses the implications of using these visual tropes and offers an alternative approach.

The popular motif of a group of people on the move is typically used to convey the scale of migration from Central America. Sometimes these stories are in sympathy with the plight of migrants, but often the images are used to express or agitate already existing anxiety about waves of foreigners. In Moises Castillo’s photograph (above) we see a stream of bodies stretching as far as the eye can see. The people are represented as an anonymous mass, making it harder for viewers to identify with their plight. The figures spill off the edges of the frame suggesting an unceasing flow, an allusion to the exodus. While the image references the biblical story of a people escaping from persecution for a new life, it could be used to suggest a foreign invasion

Whether you perceive the migrant caravan as deserving of aid or a threat to national security, this trope elicits polarized viewpoints. Although the same image may be used to support different ideologies (normally in different publications and with modified captions), a visual trope invariably simplifies a story by making it familiar.

The trope of the disorderly crowd is a common means of representing migrants as a threat. In Oliver de Ros’ photograph (below) of migrants attempting to cross the Guatemala-Mexico border, we see three men in the foreground climbing a fence, while a large crowd fills the street in the background. 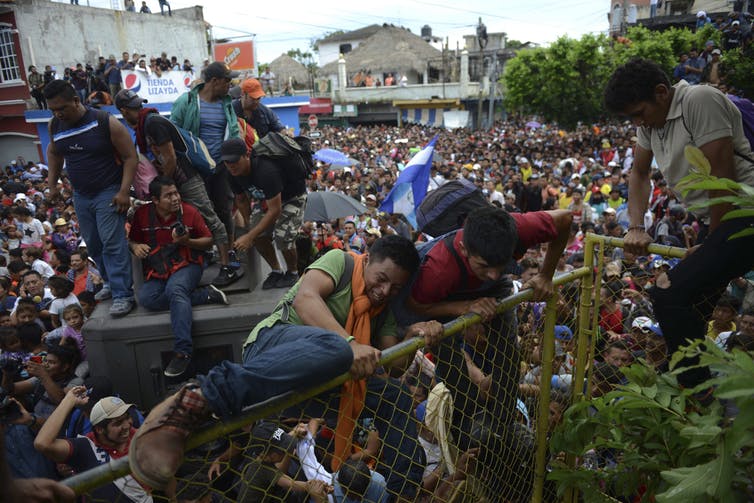 In this October 19, 2018 photo, thousands of Honduran migrants at Mexican border. Migrants broke down the gates at the border crossing and began streaming toward a bridge into Mexico. Images of unruly young men play into age-old fears and tend to feed intolerance. (AP Photo/Oliver de Ros)

Photographs of unruly young men call to mind age-old fears of “the Other.” In North America, there is a long, racist history of associating non-white men with violence and criminality, and images of unrest tend to feed intolerance. They convey the idea that humans are merely bodies that need to be managed and function as a call to order.

The effect is to disconnect migrants from the problems that have caused their displacement and to conceal the political failures that have led to the crisis. Instead of picturing the dangers migrants face on their journey, they themselves are portrayed as a menace.

Trump would like you to believe that people fleeing desperate circumstances in Central America represent a threat to the United States. Research on immigration indicates otherwise. By using tropes that maintain the status quo, the media avoids a more complicated story about how immigration policy results in violence perpetrated against migrants.

Photographs engage our emotions and have the power to inspire change, but each one can only convey a limited view of a complex reality. When we allow visual tropes to represent complicated situations, we misunderstand events, sometimes with dire consequences. 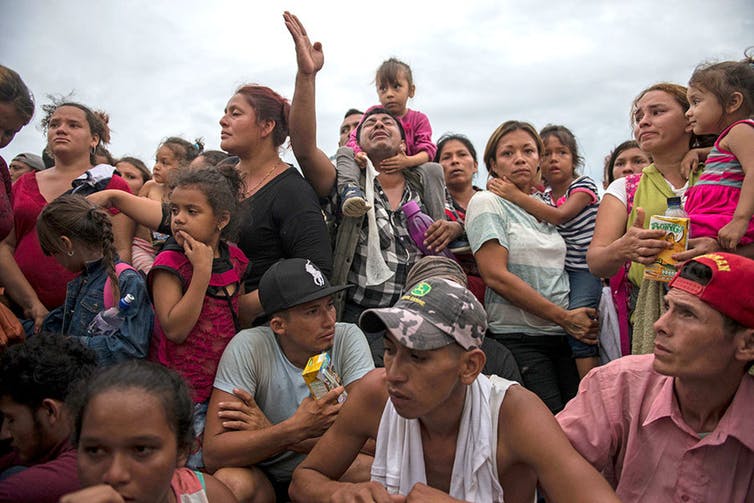 Migrants bound for the U.S.-Mexico border wait on a bridge that stretches over the Suchiate River, connecting Guatemala and Mexico, in Tecun Uman, Guatemala, Friday, October 19, 2018. (AP Photo/Oliver de Ros)

Another photograph by Oliver de Ros presents a different impression of the migrants at the Guatemala–Mexico border on the same day, October 19. In this image, women hold their children close as they wait to find out if they will be able to cross the bridge. A man at the centre of the photograph conveys his distress with a gesture as a child sits on his shoulders, clasping her small hands around his neck. Stuck in a crowd and unable to move on, the young men in the foreground look pensive and vulnerable.

This photograph resists a simple reading. Each person has a story about why they left their home and what they hope to achieve. The faces and gestures convey hardship and suffering, emphasizing the human cost of political failure.

When visual tropes are used to represent an event, they situate viewers as mere spectators to predictable narratives with foregone conclusions. Photographs have the potential to affect us deeply, and in some cases may have an impact on public perception and even policy decisions, but well-worn motifs do not inspire such a response. Instead, they shut down interpretation and turn viewers into passive observers who are less inclined to speak out.