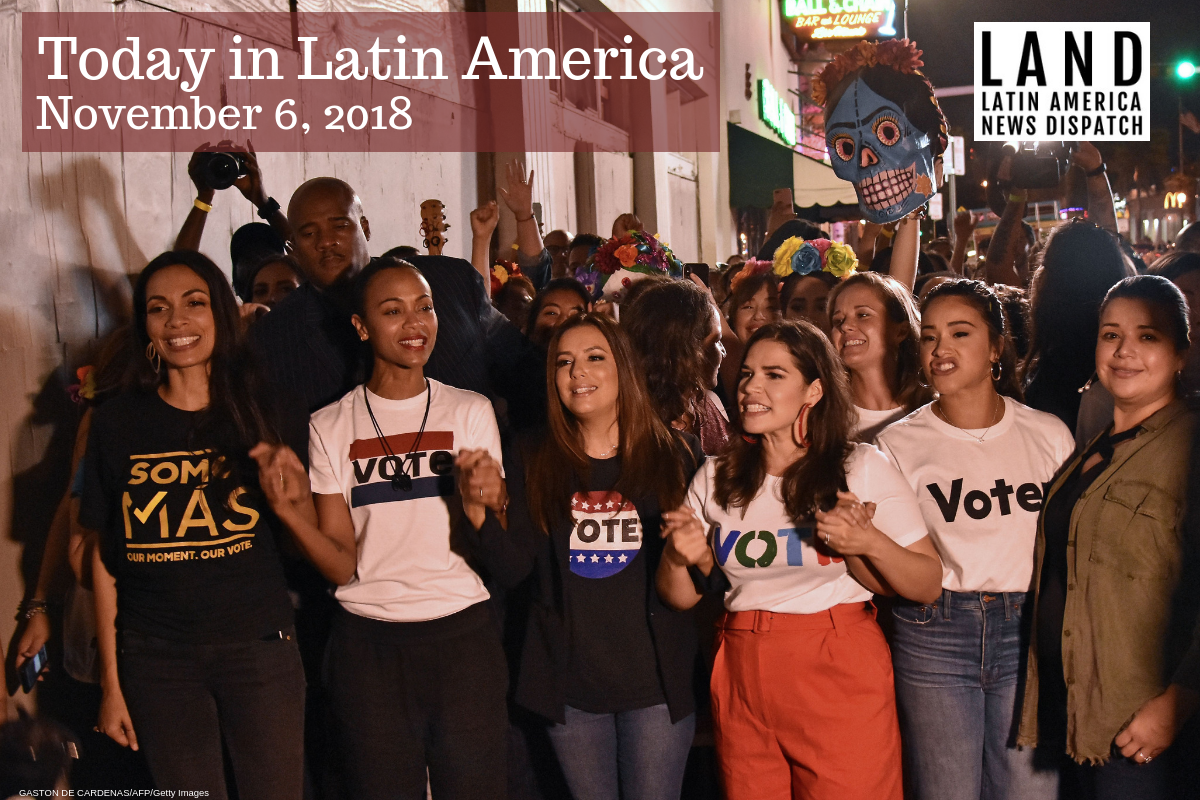 UNITED STATES: The midterm elections are today, and Latino voters are poised to make a big impact. Leading up to the election, more Hispanic voters than four years ago said they have given “quite a lot” of thought about the election, according to a Pew Research Center survey. Despite this, voter turnout among the Latino population is still lower than the population as a whole. Eva Longoria, Zoe Saldana, and Gina Rodriguez were among a group of Latino celebrities who rallied crowds in Miami Sunday in an effort to improve turnout.

With more than 29 million Latinos eligible to vote, making up nearly 13 percent of all voters, they could sway several races, particularly in California, Texas and Florida, where the largest populations of Latino voters live. The number of Latinos who say their situation in the United States has worsened under Trump has risen from 32 percent shortly after he was elected to 47 percent just before the midterms, according to another recent Pew survey. Two-thirds of the group surveyed said the Trump administration’s policies have been harmful to them.

MEXICO: Mexican legislators capped the salary of government officials so it can be no higher than that of the president, with a few exceptions, according to a document published yesterday in the official gazette. The decree also cancels pensions for former presidents, unless they are assigned by law. Both changes were part of President-elect Andrés Manuel López Obrador’s campaign platform to reduce government spending. The legislative changes will be put into effect today.

MEXICO: A maintenance water cutoff in Mexico City that began on Wednesday and was expected to last until today will be extended by two days due to a malfunction of a newly installed part, according to authorities. The water cutoff, or Megacorte, is estimated to have affected more than 7 million people. City officials are supplying water trucks to the hardest-hit areas.

MEXICO: President-elect Andrés Manuel López Obrador met with contractors of the now-canceled New Mexico City Airport yesterday to “soothe” contractors and discuss options for moving ahead. Guadalupe Phillips, CEO of the construction company Empresas ICA, said that contractors are willing to work with the government to come up with an orderly solution. One solution previously mentioned by López Obrador, and backed by Phillips, is the transfer of contracts to the construction of an airport in the Santa Lucía Air Force Base.

HONDURAS & GUATEMALA: The leaders of the two countries said there should be an investigation into who organized the migrant caravan traveling through Mexico toward the United States. Honduras’ President Juan Orlando Hernándezsaid the organizers should be held responsible for “violating the migratory laws of various countries.” Hernández met with Guatemalan President Jimmy Morales in the Honduran capital yesterday. The two presidents noted that many of the migrants have returned, but Mexico City received thousands of others in a sports stadium yesterday.

ANTIGUA & BARBUDA: Voters will decide today whether to continue using a British court for final appeals or switch to one based in Trinidad and Tobago. Two-thirds of voters will have to approve the change for it to pass. A similar referendum failed in Grenada in 2016, but this vote is a first for Antigua and Barbuda, which gained independence from Britain on November 1, 1981. Supporters say the measure would be a sign of progress post-colonialism, while opponents worry that “political divisions and family ties” would lead to unfair judgments in the Caribbean court.

COLOMBIA: Colombia’s national tree, the Quindío Wax Palm (ceroxylon quindiuense), is going extinct, according to a BBC report. Colombian scientist Rodrigo Bernal said the trees take decades to show decay, calling them “living corpses.” The Quindío Wax Palm grows mainly in two areas of Colombia: the Cocora Valley, where trees are being cut down for cattle grazing, and Tochecito, a region previously occupied by the FARC and, therefore, less studied by scientists.