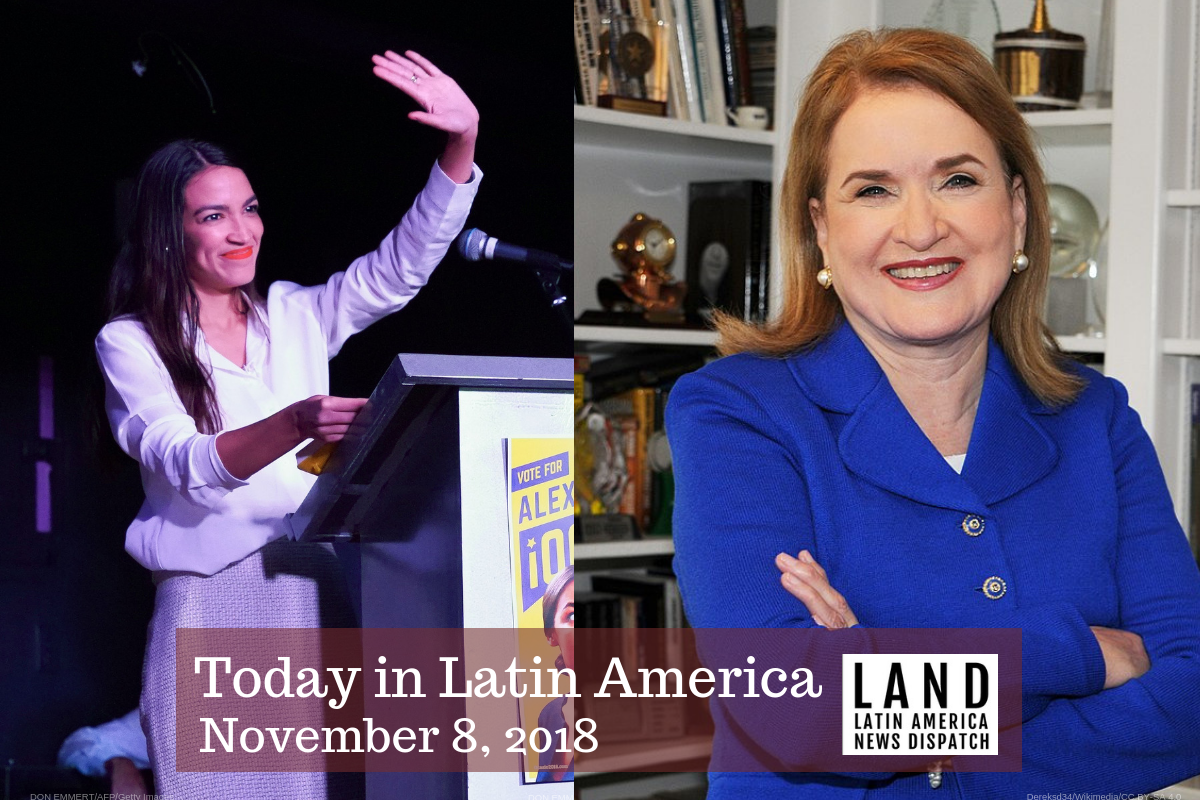 (L) Alexandria Ocasio-Cortez speaks to her supporters during her election night party in the Queens Borough of New York on November 6, 2018. She is now the youngest woman ever elected to Congress. (Photo by Don Emmert/AFP/Getty Images). (R) Sylvia Garcia won her bid, becoming one of the first two Latinas to represent Texas in the House of Representatives. (Photo via Dereksd34, Wikimedia, CC BY-SA 4.0).

U.S. MIDTERMS: In the midterm elections, at least 41 Latino candidates were elected to Congress, with two races still undecided. Thirty-three out of 44 Latino Democratic candidates won the election in Tuesday’s contests, while six out of 15 Latino Republican candidates claimed victory.

The Democratic side included Alexandria Ocasio-Cortez who became the youngest woman elected to Congress. Also on the list was Debbie Mucarsel-Powell the first Ecuadorean to have a seat in the House of Representatives and Mónica Martínez the first Salvadorian in the Senate. In Texas, Veronica Escobar and Sylvia Garcia will be the first Latinas from the state in the House.

The Republican side included Ted Cruz, who won re-election after a close call from opponent Beto O’Rouke, and Anthony Gonzalez, a grandson of Cuban exiles, who will be the first Latino to represent Ohio in Congress.

ANTIGUA AND BARBUDA: Earlier this week citizens rejected the Caribbean Court of Justice (CCJ) as their final court. In a public referendum, 52 percent opted to keep the London-based Privy Court. Prime Minister Gaston Browne, who for the first time in the history of the country allowed a referendum, said he was disappointed by the result and will not push for any other constitutional reforms.

CUBA: Five defectors from the Cuban National Ballet, who left it to pursue their careers abroad, performed for the first time in the island, after being banned from re-entering the country. This is part of a Cuban effort to reconcile with the expatriates who left the country and hadn’t been able to return. The dancers performed in the International Ballet Festival of La Habana.

PERU: The husband of jailed opposition leader Keiko Fujimori is being investigated in relation to the money laundering ring allegedly overseen by his wife, prosecutors announced yesterday.  They suspect that Mark Vito Villanella, a U.S.-born businessman, purchased two properties between 2015 and 2016 with illicitly-obtained funds. His wife, who is the daughter of former dictator Alberto Fujimori, was sentenced last week for interfering with an ongoing investigation into her Popular Force party’s bribery and money laundering activities.

COLOMBIA: Speaking on behalf of the entire national government yesterday, the Attorney General’s Office rejected a $33 million settlement offer from corrupt Brazilian construction giant Odebrecht. The offer, which followed closed-door negotiations that included other oversight agencies, would have entailed total immunity from any sanctions in relation to Odebrecht’s rigging of major construction contracts in the country. The company says it will pursue further negotiations.

CHILE: One-hundred-and-seventy-six Haitians flew back from Chile to their home country yesterday, as part of a voluntary repatriation program targeting migrants who have struggled to adjust. The new conservative government of President Sebastián Piñera has tightened visa requirements and says the economy cannot accommodate the some 150,000 Haitians who arrived during the previous administration. The repatriated migrants reportedly complained of difficulties learning Spanish, finding work, and dealing with the cold winter.