Democracy Is at Risk in Latin America and the Far Right Is Moving in: Here’s How It Went Wrong for the Left 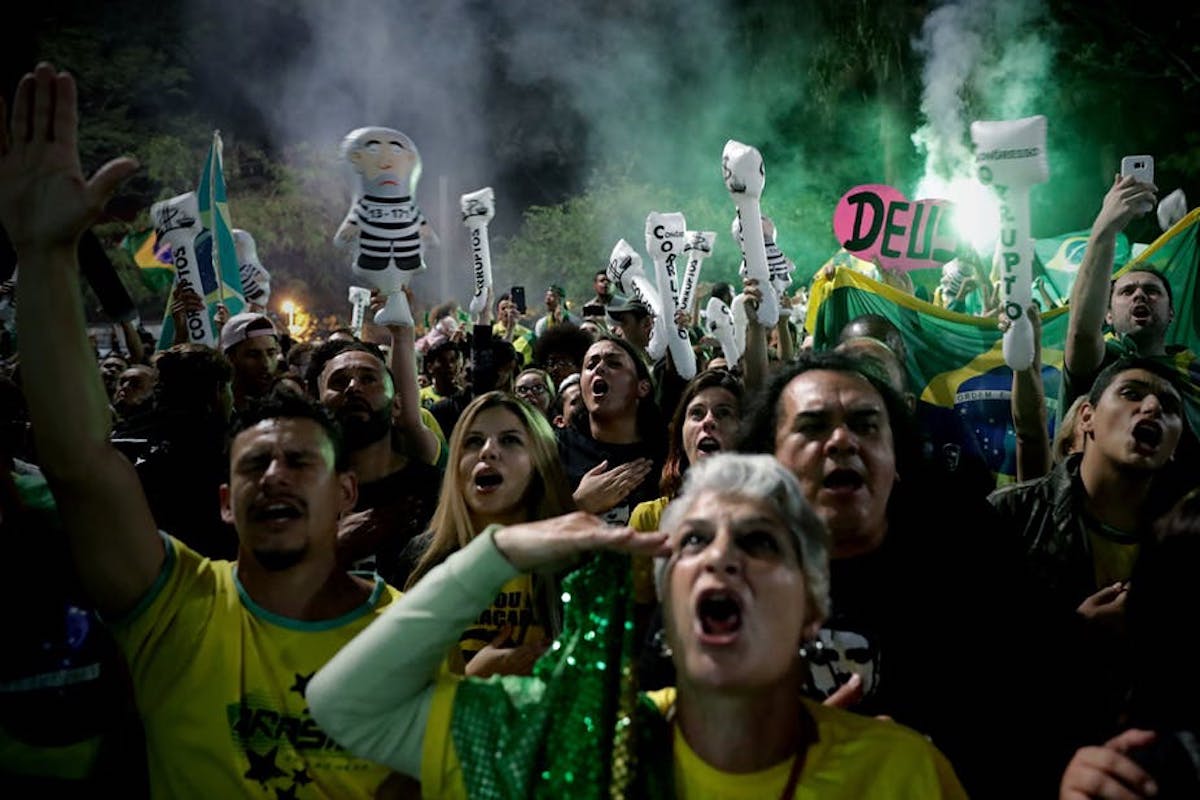 By Pia Riggirozzi, University of Southampton

Latin American democracy is in peril, a crisis driven by rising social polarization and a growing intolerance of dissent. Institutional mistrust is also rising and risks deepening the disconnect between citizens and government.

Even more disturbingly, the same survey shows that the level of support for democracy (over any other form of government) has dropped eight points from 2010 down to a slim majority of just 53%. Meanwhile, the percentage of those indifferent to the type of political system they live under has grown over the same period from 16% to 25%. Tellingly, 80% think corruption is affecting the quality of democracy, a figure that has increased significantly since 2010.

It is hardly surprising, then, that a far-right former army captain with an undistinguished career in Brazil’s congress, Jair Bolsonaro, won the country’s October presidential elections by promising to restore military-style law and order.

This widespread shift to the right in Latin American politics, and in Western societies too, is not simply a partisan change—it is also evidence that democratic principles are themselves collapsing. Reconnecting the bond between citizens, public institutions and government is now critical if meaningful democracy is to serve as a means of making society fairer.

The Rise of Anti-Politics

The U.K.’s 2016 Brexit referendum and the election of Donald Trump in the US the same year raised important questions about the incentives and drawbacks of neoliberal democracy – and the rise of a new form of anti-politics.

Both events highlighted widespread political disaffection with an insulated and arrogant ruling elite and its insensitive political leadership. This frustration was exacerbated by post-financial crisis austerity policies, which are cutting away at the welfare system and social contract that have hitherto guaranteed social stability.

This has led —in the U.K., U.S. and elsewhere— to a disturbing new focus on “national identity”. This “identity” often takes precedence over any responsibility towards “others”, whether they are legal immigrants who contribute economically and culturally, or those ill-fated, dispossessed, irregular immigrants and asylum seekers who are simply trying to survive. It is often nationalist, racist.

Where the Left Went Wrong

In the early 2000s, much of Latin America, particularly Argentina, Bolivia, Brazil, Chile, Ecuador, Uruguay and Venezuela, aspired to create new “post-neoliberal” forms of government. They sought to retain elements of the previous export‐led growth model while introducing new mechanisms for social inclusion and welfare.

The extent to which post-neoliberalism delivered on these pledges is disputed. There were, however, some real achievements—particularly anti-poverty programs that included tax incentives, conditional cash transfers, social pensions, and other forms of targeted spending and wealth redistribution. Real efforts were also made to create new opportunities for human rights and activism, and to advance ethnic equality, women’s rights and legalized same-sex relationships.

But these advances are now at stake. Overall, post-neoliberalism failed to articulate a convincing alternative to the neoliberal model of market democracy—and didn’t sufficiently shift away from dependence on natural resources and agrobusiness. Leftist, egalitarian policies were resisted by the elite (particularly landowners and those in agrobusiness and mineral export) who felt that their privileges were being threatened, especially as there was a global decline in commodity prices.

Nor was the left immune to economic mismanagement and corruption, which led to growing disenchantment with left-wing governments and the leaders behind them. Corruption, and the perception of it, erodes confidence in government and leaves behind it a political vacuum.

And so Latin America is moving sharply to the right under pro-business leaders who demonize the left and are reclaiming power, particularly in the strongest economies, such as Brazil, Chile, Colombia, Peru and Argentina.

The Tragedy of Latin American Democracy

Politically, perhaps, the greatest disappointment is not that social conflict and political disagreement continued and even expanded under the region’s leftist governments—that’s natural in democracy. The real shame is that a winner-takes-all dynamic took over, increasing social polarization and snuffing out constructive dissent.

Bolsonaro doesn’t engage with his political opponents, he threatens to rid the country of left-wing “outlaws.”

In one of the wold’s most unequal countries, where millions are discriminated against, he received massive support as a candidate who openly promotes discrimination.

The risk is that democracy is failing many, increasingly normalizing the demonization of the “other.” This “other” is now anyone who is perceived to be a drain on national resources, but can also include women, the poor, indigenous people, migrants, and “scroungers” on benefits. This right-wing backlash has not only led to a decline in social democratic representation, but also to the reemergence of discriminatory narratives that poison the political climate, bolster growing intolerance and undermine the social foundations of democracy.

Back in the 1980s, as Latin America redemocratized, political scientists such as Norbert Lechner and Adam Przeworski asked whether it is possible to reach a cross-party, inter-societal consensus on a program of social and economic redistribution—or whether an entrenchment of socioeconomic and political privilege is the price that must be paid in Latin America for liberal democracy. Today, the latter seems increasingly to be the sorry answer.

Nevertheless, as citizens, we must find new ways to hold governments to account and lead social resistance to any attempt to reintroduce austerity or limit civic freedoms. Without productive dissent, democracy in the region may vanish altogether.