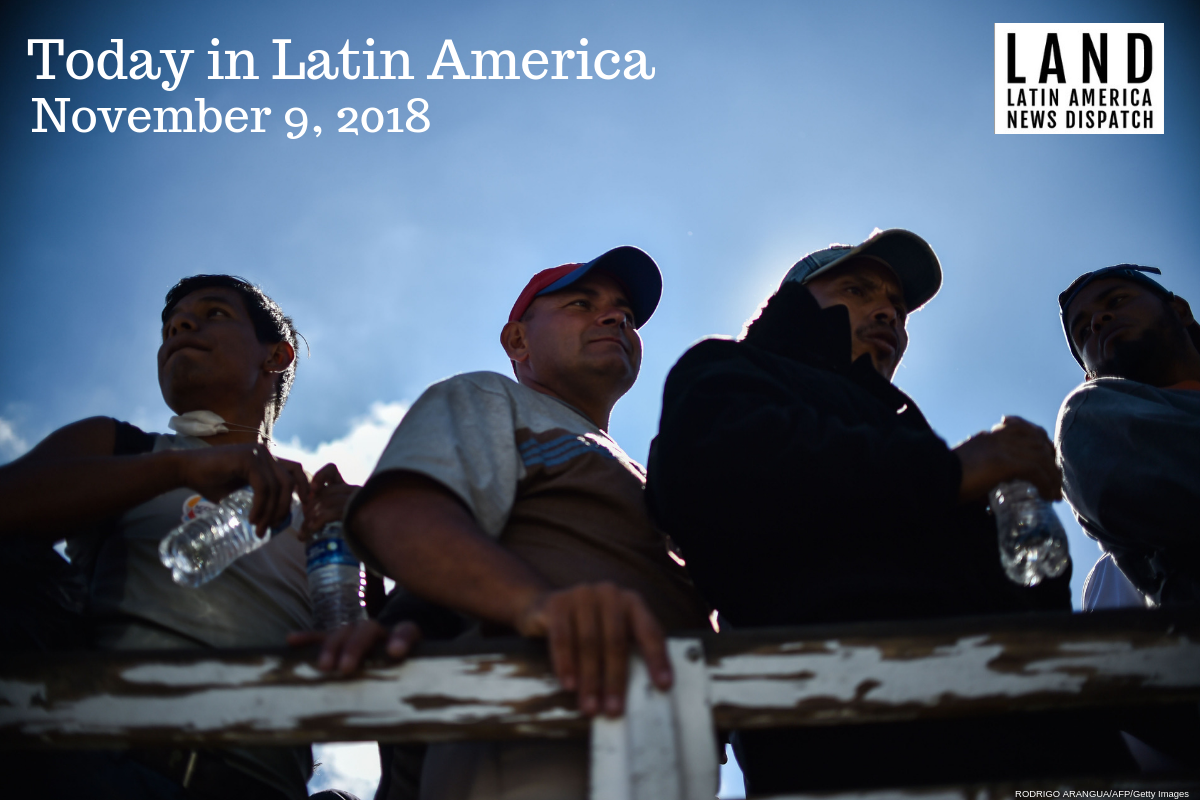 Migrants from Central American countries —mostly Hondurans— heading in a caravan to the U.S., are pictured on board a truck at the Mexico City-Puebla highway in San Marcos’ toll, Mexico, on November 5, 2018. (Photo by Rodrigo Arangua/AFP/Getty Images)

THE UNITED STATES-MEXICO BORDER: The Trump Administration announced new immigration rules that will grant President Trump sweeping new authority to deny asylum to migrants who cross the border illegally. The rules will likely be challenged in court, with immigration advocates arguing that they violate federal asylum law. According to Omar Jadwat, the director of the American Civil Liberties Union’s Immigrants’ Rights Project, “The law is clear: people can apply for asylum whether or not they’re at a port of entry, and regardless of their immigration status. The president doesn’t get to ignore that law, even if he dislikes it.”

While the Trump Administration has not yet announced how the new rules will be enforced, they are widely expected to target Central American migrants, of which 5,000 are currently being sheltered in a sports arena in Mexico City. About 85 percent of the migrants are from Honduras, with the rest from other Central American countries. The migrants demanded buses yesterday to take them to the U.S. border, hoping to arrive in California.

MEXICO: The International Monetary Fund (IMF) said yesterday that the government should wait to invest in new refineries until the state oil company (PEMEX) is performing better. President-elect Andrés Manuel López Obrador has shared plans to build a new refinery for $1.8 billion. PEMEX owes more than $100 billion, which was part of the reason a credit agency gave Mexico a “negative” outlook on its long-term debt last week. The IMF said “uncertainty” with Obrador’s policies may pose risks to the country’s economy, and urged the incoming government to continue with reforms.

MEXICO: Senator Olga Sánchez Cordero presented a bill yesterday to legalize “possession, public use, growing, and sales” of marijuana. The legislation would allow individuals to privately grow up to 20 plants and smoke it wherever tobacco smoking is allowed. Edible sales would remain illegal, however, as would providing marijuana to minors, advertising it, and driving under the influence. Both houses of congress, where Cordero’s party holds majorities, still have to approve the bill. Cordero is a Morena member and President-elect Andrés Manuel López Obrador’s pick for Interior Secretary.

UNITED STATES: A U.S. appeals court moved against President Donald Trump’s efforts to end DACA yesterday, keeping in place the preliminary injunction that has delayed Trump’s decision. The lawsuits of California and other plaintiffs suing the administration over DACA will still need to be heard. Kim Wardlaw, a judge serving on the 9th Circuit Court of Appeals, said the federal government’s case for ending DACA is unlikely to hold up to legal scrutiny. On Monday, the Trump administration asked the Supreme Court to decide whether it can end DACA, which has allowed about 700,000 people to obtain legal status in the United States.

CUBA: In an effort to export more products to Cuba, representatives from the U.S. agribusiness sector arrived in Cuba yesterday for a three-day conference. They hope to create more opportunities for U.S. agriculture producers through the U.S.-Cuba Agriculture Coalition and plan on using the trip to meet with Cuban officials as well as to visit farms. U.S. farmers have been allowed to sell food to Cuba since an amendment was added to the trade embargo in 2000. Although the United States sold $260 million of food to Cuba in 2017, it was the one of the lowest figures of this decade.

EL SALVADOR: Deepening its relationship with El Salvador, China announced yesterday a $150 million investment for social and technological projects. These cooperative projects will focus on infrastructure and education. The two countries established diplomatic ties in August, with El Salvador cutting off diplomatic ties with Taiwan soon after. The new announcement comes on the tail end of a state visit by Salvadoran President Salvador Sánchez Cerén to China. Panama and the Dominican Republic have also taken similar steps to strengthen their relationships with China.

THE ANDES AND SOUTHERN CONE

VENEZUELA: The United Nations stated yesterday that the amount of Venezuelan migrants has risen to 3 million worldwide. The UN agencies for refugees and migration reported that 2.4 million of these refugees are located in Latin America and the Caribbean. The largest concentration is found in Colombia with over one million Venezuelan refugees. Peru, Ecuador, Argentina, Panama and Brazil have the next largest immigrant populations, in that order, according to the U.N. High Commissioner for Refugees and the International Organization for Migration.

BRAZIL: Police arrested seven state legislators in Rio de Janeiro on allegations of their involvement in the acceptance of bribes in exchange for supporting a criminal organization run by a former governor, Sérgio Cabral. Police also issued three warrants for former state seat holders and dozens of other search warrants, which resulted in the arrests of 12 other people in connection with the probe. The probe is part of the larger “Operation Car Wash” investigation into systemic graft. Cabral is currently serving a prison sentence for accepting thousands of dollars in bribes and buying votes when Brazil was chosen to host the 2016 Olympics.

ECUADOR: A lawyer for Ecuador’s former president Rafael Correa denied claims that the estranged leader is seeking asylum in Belgium. Correa currently faces prosecution in Ecuador for the kidnapping of an opposition lawmaker in 2012. Correa governed Ecuador for 10 years and now lives in Belgium, his wife’s home country. Reports stated that the former president requested for asylum in June. “The news that has been spread does not correspond to the truth,” said Caupolican Ochoa, Correa’s lawyer.