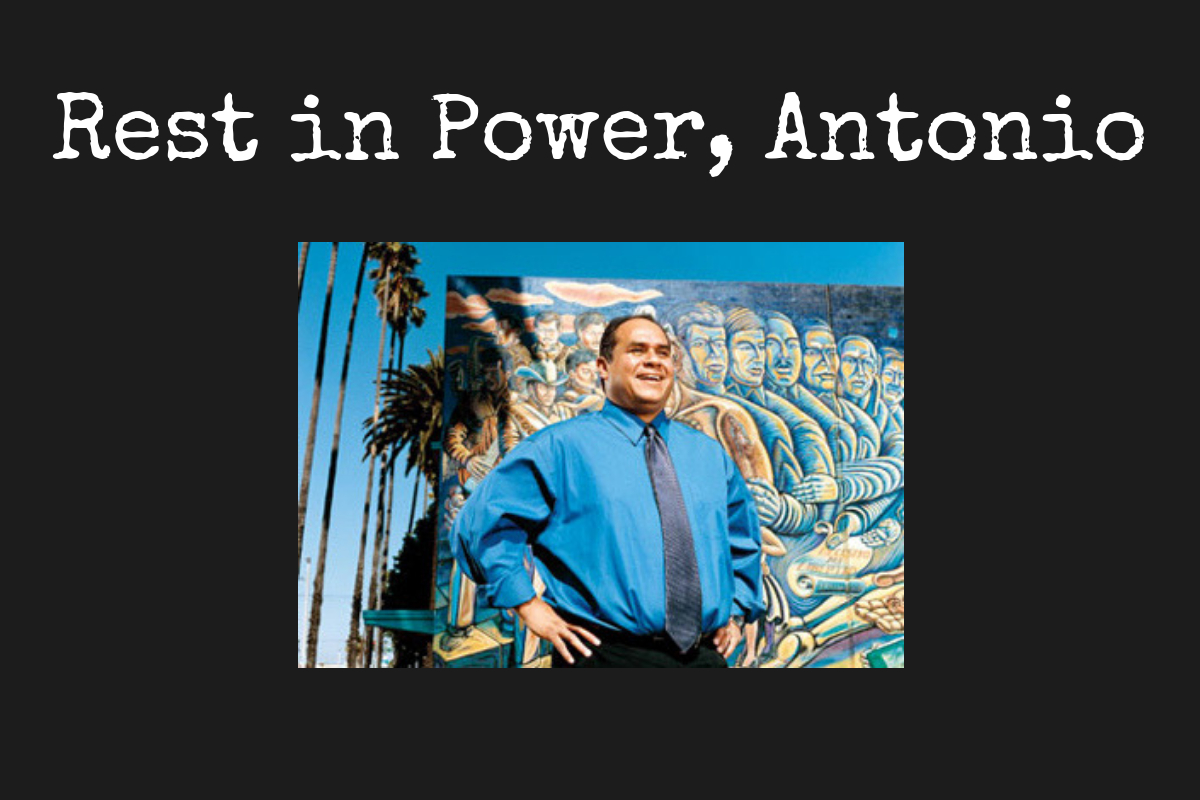 Many of us woke up this morning to news of the passing of our friend and compadre, Antonio González. Antonio led Su Voto Es Su Voz/Southwest Voter Registration, EducationProject.org and the Willie C. Velásquez Institute. He was also a serious political thinker and strategist who was also a committed ally of struggles for social justice in the United States and across the Americas.

Most notably, Antonio remained, throughout his great political trajectory, a loving father, husband and all-around great dude you could drink a beer with and talk política, always política. The good política—that is, the one that includes but is beyond the ballot box.

Without question, Antonio was (by far) the most left-leaning and consequential leader of a national Latino organization in the United States. But because he leaned unapologetically leftward, he did not get the national recognition concomitant with his intellect, power and political capability.

Throughout his lifetime, “Latino leadership” meant being subservient to powerful political and corporate interests whose rancho approach to us views us as ganado (cattle) to be corralled with sombreros and the threat of whips from bad Republican hombres at around election time if we don’t vote Democrat. Antonio González did not bend or bow before these powers, but instead committed to fighting the: registering, educating and mobilizing the new Latino voter he dreamed of and fought to create.

He was, in this sense, ahead of his time, for this Latino political future is only beginning to be realized.

Like his friend and mentor, the great Willie Velásquez, Antonio worked across the Latino spectrum, registering Cubans in south Florida or Puerto Ricans in Chicago with the same verve and smarts he brought to strategizing with Chicanos and Salvadorans and others to flip the political tortilla of his beloved Los Angeles.

The long list of not just civil rights struggles but revolutionary causes that Antonio had the audacity to support is long. Despite leading a national nonprofit Latino organization, he stretched the nonprofit status to its limits, directly and unconditionally backing movements and leaders in Mexico, Haiti, El Salvador, Nicaragua, Venezuela and so many other countries that benefited from the delegations, media coverage and other solidarity he brought. Many in the U.S. who would not otherwise had contact with revolutionary movements saw the radical light, thanks to Antonio’s tireless efforts to build hemispheric bridges.

While other “national Latino leaders” in fealty to the Democratic Party continue to cower before the possibility they’ll be considered “too left,” Antonio leaves us a rich legacy of articulating and practicing a vision of united struggle.

Viewed from the perspective of a people targeted by increasingly radical hatred, a people in urgent need of intelligent, intrepid and passionate political leadership, Antonio was ahead of his time, far ahead of his time. In this sense, the loss of Antonio González is a matter of national and international consequence. We honor him by continuing La Lucha he loved.