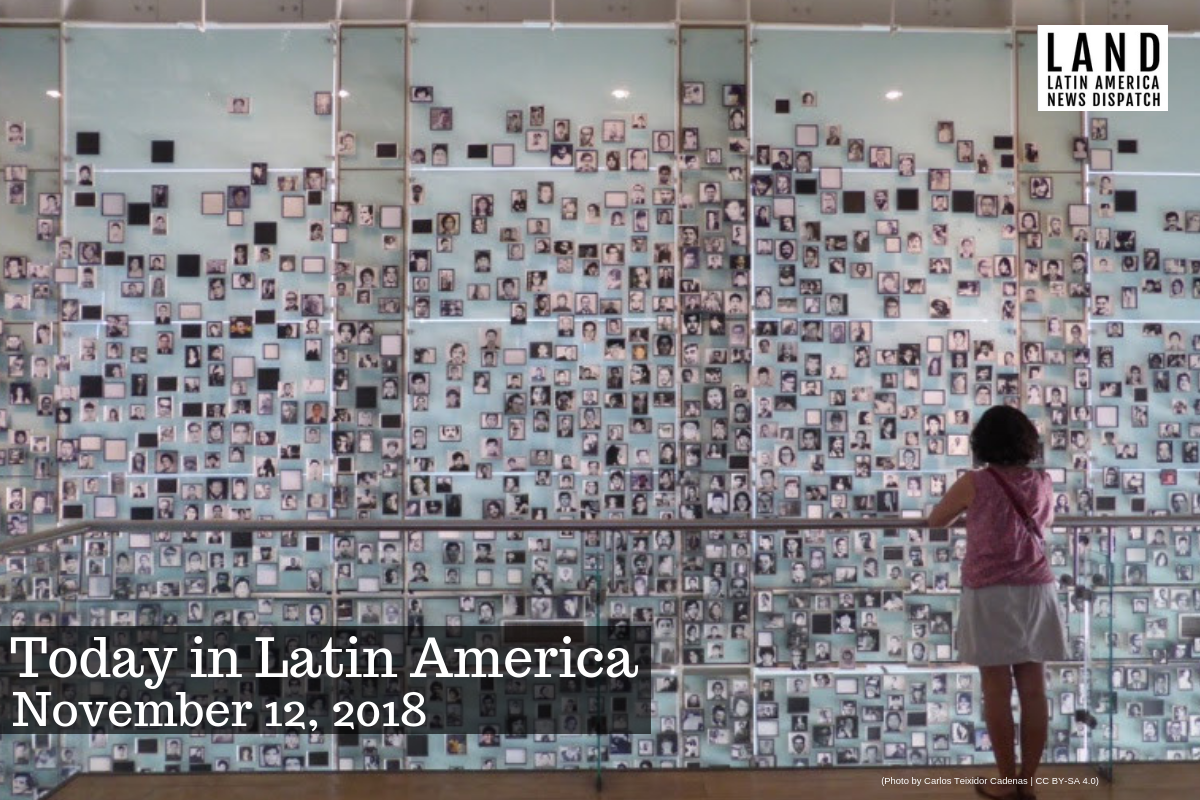 A woman stares at the photos of those who were murdered during the 1973-1990 Chilean dictatorship at the country’s Museum of Memory and Human Rights (Photo by Carlos Teixidor Cadenas | CC BY-SA 4.0)

CHILE: General Juan Emilio Cheyre was convicted on Friday to three years and one day of house arrest for complicity in the killing of 15 citizens during Chile’s “Caravan of Death,” a military raid ordered by Augusto Pinochet to hunt down opposition activists during his military dictatorship.

General Cheyre, who served as head of the army from 2002 to 2006 and is 71 years old, was a young officer when the Caravan arrived in the Northern city of La Serena and executed 15 individuals. For helping cover it up, he is now the most senior figure so far to be held accountable for abuses committed under Pinochet.

On Friday, the same court convicted Ariosto Lapostol, who commanded the regiment stationed at La Serena where Cheyre was stationed. He will have to serve 15 years in prison for partaking in the massacre.

It is estimated that the Caravan of Death killed 97 activists between September 30 and October 22, 1973.

UNITED STATES: A week into El Chapo’s trial in New York City, his former top lieutenant Vicente Zambada pled guilty to charges of drug trafficking. Zambada agreed to cooperate with prosecutors in a plea deal to shorten his life sentence (plus 10 years in prison) and protect his family from any cartel backlash. The son of Sinaloa kingpin Ismael “El Mayo” Zambada, the 43-year-old Zambada has been overseeing illegal drug shipments in major U.S. cities since his early 20s.

MEXICO: After a day of losses, Mexican stocks continued to dip, following President-elect Andrés Manuel López Obrador’s new proposal to curtail maintenance and electronic transfer fees charged by private banks. The Mexican peso has dropped roughly 2.3 percent next to the U.S. dollar since last week. In response to sudden stock changes, López Obrador’s financial management team said the bill and its impact are still subject to evaluation contingent on its impact.

MEXICO: In Mexico City, thousands of protestors condemned López Obrador’s plan to stop the construction of a new $13 billion airport in a march nicknamed the “Fifí march” on social media. But just last month, 70 percent of 1 million voters vetoed against continuing construction. Only weeks before López Obrador takes office on December 1, the airport is one-third completed.

HAITI: A group of 86 Haitian nationals traveling by boat were returned to the island on Saturday after the U.S. Coast Guard intercepted their vessel. The Coast Guard reported that the operation took place on Saturday morning north of Punta Maisi, Cuba. Earlier this year, U.S. authorities repatriated 127 Haitians found navigating on an overloaded vessel near Cuban waters.

CUBA: On Friday, Vietnam and Cuba signed a new trade agreement, reaffirming their compromise to deepen financial and economic bilateral ties. The event took place in Hanoi and counted with the participation of President Nguyen Phu Trong and his Cuban counterpart Miguel Díaz-Canel. Vietnam has been an ally of Cuba, especially helping to lift the American embargo, which was recently condemned at the U.N. General Assembly by the international community.

GUATEMALA: Environmental authorities announced that artisanal bio-fences will be deployed in rivers to increase plastic waste collection. This comes after Honduras blamed Guatemala for increased plastic pollution in its Caribbean Sea basin, off the coast of the island of Roatán. Earlier this year, the U.N. released a report surveying 43 countries, elaborating on the several threats that plastic debris poses to marine wildlife. More than 16 Latin American countries have signed the U.N.’s Clean Seas campaign, aimed at reducing plastic waste in waterways.

EL SALVADOR: Nayib Bukele, the youngest candidate running for election in 2019, is poised to break El Salvador’s two-party hegemony. Mr. Bukele currently leads in the polls, ahead of the conservative ARENA party and the incumbent left-wing FMLN, the party with whom he first got experience in politics. His social media presence “conveys up an image serious politician and a spirited millennial,” Ximena Enríquez of Americas Quarterly reports. Presidential elections in El Salvador are expected to take place in February next year.

NICARAGUA: Spanish Foreign Minister Josep Borrell asked for diplomatic pressure to be exerted on President Daniel Ortega’s administration. During the 19th edition of the Iberoamerican Forum, held in Madrid, Borrell asked more action from the Spanish government and the European Union. Over the weekend, the Nicaraguan diaspora in the U.S. also condemned President Daniel Ortega’s government and demanded his assets be confiscated.

BOLIVIA: A construction worker was arrested in Potosí, Bolivia, last Friday after he reportedly “assaulted” President Evo Morales during a visit to the city. According to some sources, Rafael Chambi simply yelled “Bolivia said no” (in reference to the 2016 referendum in which Bolivians rejected Morales’s bid for re-election) while other sources claim he threw water at President Morales.

ARGENTINA On Friday, lawmakers in Argentina transformed the “Ciervo de los Pantanos” Reserve into a national park. Located only an hour away from Buenos Aires, the park extends for approximately 20 square miles and is home to the Marsh deer, an endangered species of deer capable of traversing swamps without sinking. Jerónimo Valle, the park’s director, said that the decision will provide much-needed funding to protect the area.

CHILE: The Chilean military is being scrutinized for the Milicogate case, where thousands of dollars were laundered from military funding. As the investigation continues, President Sebastián Piñera requested the resignation of 21 generals that are possibly connected to the case.