About 4,000 People Evacuate Due to Volcano Activity 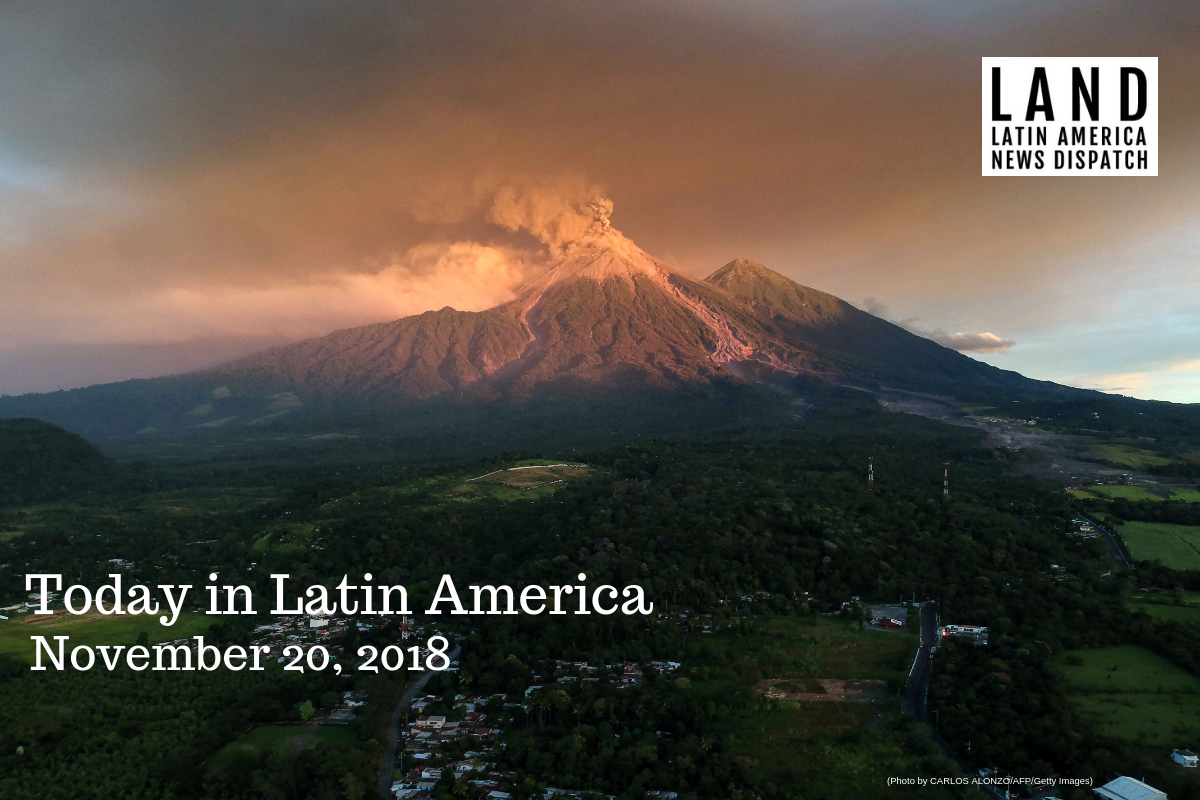 The Volcano of Fire erupting, as seen from Escuintla, Guatemala on November 19, 2018. (Photo by CARLOS ALONZO/AFP/Getty Images)

GUATEMALA: About 4,000 people evacuated the area around Guatemala’s Volcano of Fire yesterday after it began ejecting hot rock and ash. As one of Central America’s most active volcanoes, the Volcano of Fire erupted in June, killing 194 people and left many missing. The rapid-moving mix of very hot gas and volcanic matter descended and engulfed towns such as San Miguel Los Lotes and El Rodeo.

As of yesterday afternoon, there were no reports of lahars —the treacherous mix of debris, ash, rock and mud— reaching communities. However, four camps have been set up to refuge evacuees. As a column of ash reached almost 23,000 feet (7,000 meters) above sea level and wafted towards Guatemala City, men remained behind and protected their homes from looters, leaving mostly women and children in shelters.

THE BORDER: The United States closed its busiest border crossing with Mexico for about three hours on Monday to strengthen security measures. The U.S. Department of Homeland Security halted northbound traffic and one of the two pedestrian lanes at San Ysidro. Southbound traffic continued as usual. The Californian crossing point is located just across from Tijuana, where members of the Honduran migrant caravan arrived earlier last week. Approximately 110,000 people enter the United States through San Ysidro each day, yet DHS processes only about 100 asylum seekers at the location daily.

MEXICO: Mexican drug lord Héctor Beltrán Leyva died of a heart attack at the age of 56 Sunday evening. Mexican officials transferred Beltrán Leyva to a hospital from the maximum-security prison when they noticed he was having chest pains. While incarcerated at Altiplano, he faced charges for trafficking marijuana, heroin, cocaine and methamphetamines. Beltrán Leyva and his brothers’ cartel was infamous for its rivalry against El Chapo’s Sinaloa cartel. Two of Beltrán Leyva’s three brothers remain in prison. The third died in a 2009 shootout.

MEXICO: One Red Cross paramedic and three Mexican police officers died in a gang shooting in the state of Guerrero on Sunday. Six other Red Cross workers, one police officer and two civilians were injured. While Red Cross workers were distributing aid packages to families in the township of Taxco, young gunmen attacked the aid distribution event. Denouncing the act as “an irrational act that verges on terrorism,” Mexican authorities emphasized the Red Cross’s political neutrality and its aim to provide humanitarian relief to poor families.

NICARAGUA: Human rights groups demanded an end to the repression and persecution of the labor movement after a sixth leader was imprisoned over the weekend. Authorities took Freddy Navas from his home and violently dragged another leader, Mario Lener Fonseca Díaz, from a taxi after the campesino leaders opposed the construction of a interoceanic canal.

PANAMA: Former President Ricardo Martinelli shouted “I’m innocent!” at reporters yesterday as he arrived at his own hearing. The politician is accused of spying on at least 150 people and buying spy equipment worth millions of dollars. He insists he is a victim of political persecution. Martinelli implicated Judge Jerónimo Mejía of using the case to win the favor of the current president and obtain a seat on the Supreme Court. It is unclear when it Mejía will announce the decision on the hearing, which determines whether Martinelli will stand trial.

PERU: Former president Alan García requested asylum at the Uruguayan embassy in Lima hours after a judge barred him from leaving the country. García is accused of taking bribes from the Brazilian construction company Odebrecht in exchange for government contracts to build a rail line in Lima. García is the latest of several Latin American officials named in the Odebrecht corruption scandal. Ex-presidents Ollanta Humala and Alejandro Toledo are also under investigation.

COLOMBIA: Four people were arrested and expelled from Bogota’s newly built migrant camp for Venezuelans, following a violent protest over food rations. They are accused of looting the camp, destroying tents and attacking police officers. The camp is the first of its kind in Bogota and houses 470 Venezuelan migrants. Its construction is a response to the more than one million Venezuelans who have moved to Colombia to escape poverty.

CHILE: Two police officials resigned following the fatal shooting of a young indigenous man in Araucania last week. Police accidentally shot Camilo Catrillanca, 24, while pursuing car thieves. The victim’s family said he was shot in the back while riding a tractor. Officers later destroyed the video that showed the shooting, which sparked large protests among the Mapuche community, to whom Catrillanca belonged.