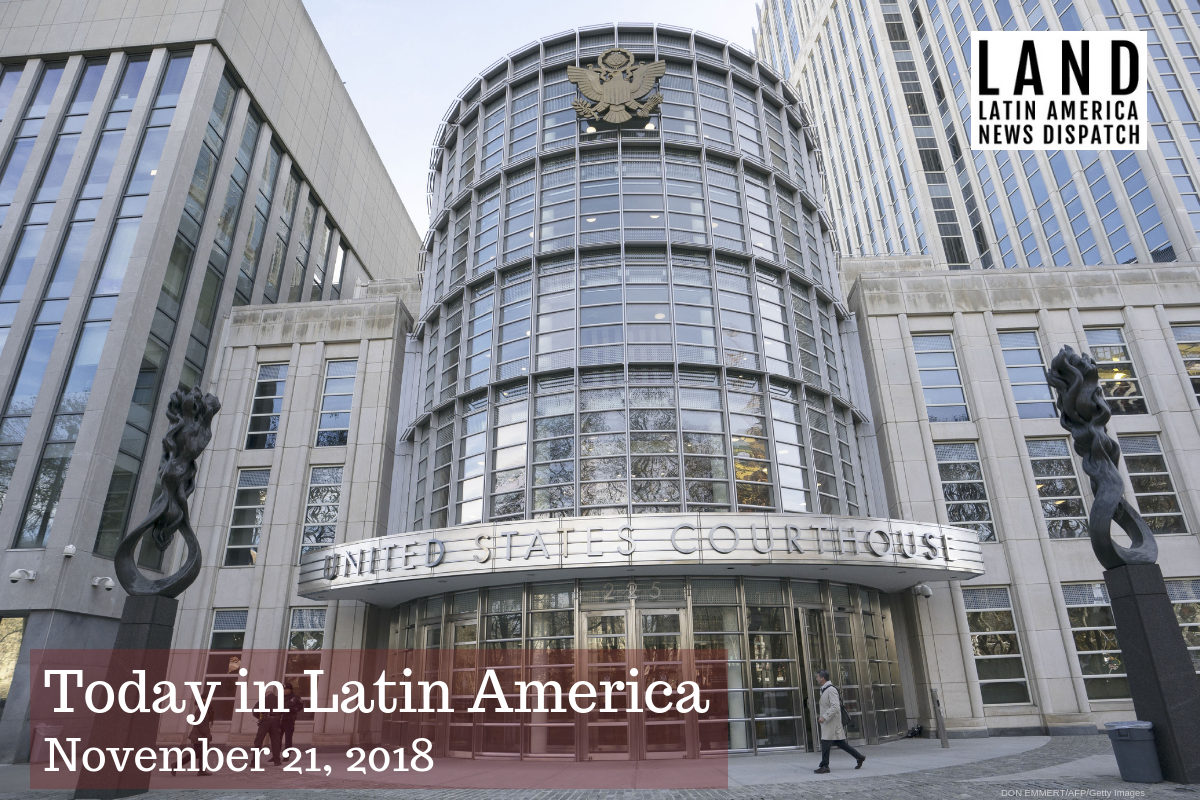 The Brooklyn Federal Courthouse is viewed as the trial of Joaquin ‘El Chapo’ Guzman takes place inside on November 14, 2018 in New York. (Photo by Don Emmert/AFP/Getty Images)

UNITED STATES: During the trial of Mexican drug lord Joaquín “El Chapo” Guzman in New York, cartel insider Jesús Zambada testified yesterday that his brother bribed a top official in the administration of former President Felipe Calderón. According to Zambada’s testimony, El Chapo’s Sinaloa Cartel bribed the official, Genaro García Luna, while he was the head of the Federal Ministerial Police as well as while he was the secretary of public security. Luna was named one of the top 10 most corrupt Mexicans of 2013 by Forbes.

Zambada also said a bribe of “a few million dollars” was made to Gabriel Regino, who worked for President-elect Andrés Manuel López Obrador, in 2005 when Obrador was mayor of Mexico City. Following Zambada’s testimony, Regino wrote on Twitter, “I categorically deny these accusations.”

Guzman’s trial has rested for the week and will continue Monday. He pleaded not guilty to drug-trafficking charges and faces the possibility of life in prison if convicted.

UNITED STATES: A federal judge blocked President Trump’s asylum proclamation Monday, ordering the administration to continue accepting asylum claims regardless of how the claimant entered the United States. Trump had signed the order earlier this month, which stated that the United States would not hear asylum cases from migrants who entered the country illegally. In his decision, Judge Jon S. Tigar of the United States District Court in San Francisco wrote, “Whatever the scope of the president’s authority, he may not rewrite the immigration laws to impose a condition that Congress has expressly forbidden.”

MEXICO: Anti-immigrant protests over the weekend left the migrants currently camped out in Tijuana anxious and fearful. About 500 people protested, chanting “Get out!” Meanwhile, Mexican officials arrested 34 migrants yesterday for minor offenses, turning them over for deportation. Around 3,000 migrants reached Tijuana after more than a month on the road from Central America.

HAITI: At least eight people have died since Sunday in violent demonstrations across Haiti to demand the resignation of President Jovenel Moise. Media reported one police officer was shot dead and burned by a gang and one protester was shot in the head. Protesters are demanding Moise resign because of his failure to investigate alleged corruption in the previous government over Petrocaribe, a Venezuelan subsidized energy program.

PUERTO RICO: Hurricane María practically wiped out endangered Puerto Rican parrots after their habitat and food sources were destroyed. Scientists claim half of the population died in the Category 4 storm, and they are struggling to save the rest. In the El Yunque tropical rainforest, where some of the last remaining wild parrots live, only two survived the hurricane. Before the storm, scientists counted 56 birds in the rainforest.

GUATEMALA: Activity from the Volcano of Fire has finally subsided, allowing thousands of Guatemalans to return to their homes. Around 4,000 people had been evacuated as the volcano spewed lava. In June, 194 people died —and 234 are still missing— after the same volcano erupted.

COLOMBIA: Colombia’s government asked the nation’s company regulator to ban Odebrecht, a Brazilian construction company, from state contracts for the next 20 years. Odebrecht confessed to corrupt practices in 2016, resulting in one of the biggest corruption cases in history. Once Latin America’s largest construction conglomerate, the company has faced strong backlash over the past two years.

VENEZUELA: A former Venezuelan official and the former owner of a Dominican Republic bank pleaded guilty to money-laundering charges, prosecutors announced yesterday. They were both involved in a $1 billion bribery scheme. According to Miami federal prosecutors, Alejandro Andrade and Gabriel Arturo Jimenez pleaded guilty months ago, but their cases were sealed. Andrade served as Venezuela’s national treasurer from 2007 to 2010, and Jimenez, a Venezuelan citizen, owned Banco Peravia until 2014.

BRAZIL: Sergio Moro, Brazil’s former anti-corruption judge and now incoming justice minister, chose Mauricio Valeixo as the director-general of Brazil’s federal police, focusing on fighting organized crime and corruption. Moro also named Erica Marena as head of the ministry’s department for international legal cooperation and the recovery of assets derived from graft and exported abroad. Both Valeixo and Marena were part of the Car Wash operation, the biggest corruption investigation case led by Moro. Valeixo is a former police superintendent in the state of Paraná, where the investigation took place, and Marena was the police inspector who named the case.
GOT NEWS? Send the editors tips, articles and other items for inclusion in Today in Latin America to tips@latindispatch.com.