TIJUANA — “¿Me compras mi dinero?” a little boy asked, holding his food plate. After he said it a few times to no avail, he pulled out some bills from his pocket. It was Honduran currency. He could not use it to buy anything, and he was asking to exchange money for a currency that could be used in Tijuana near the U.S. port of entry.

As the Trump administration vilifies the caravan of asylum seekers as “hard criminals,” this question from the little Honduran boy turns out to be heart-wrenching. 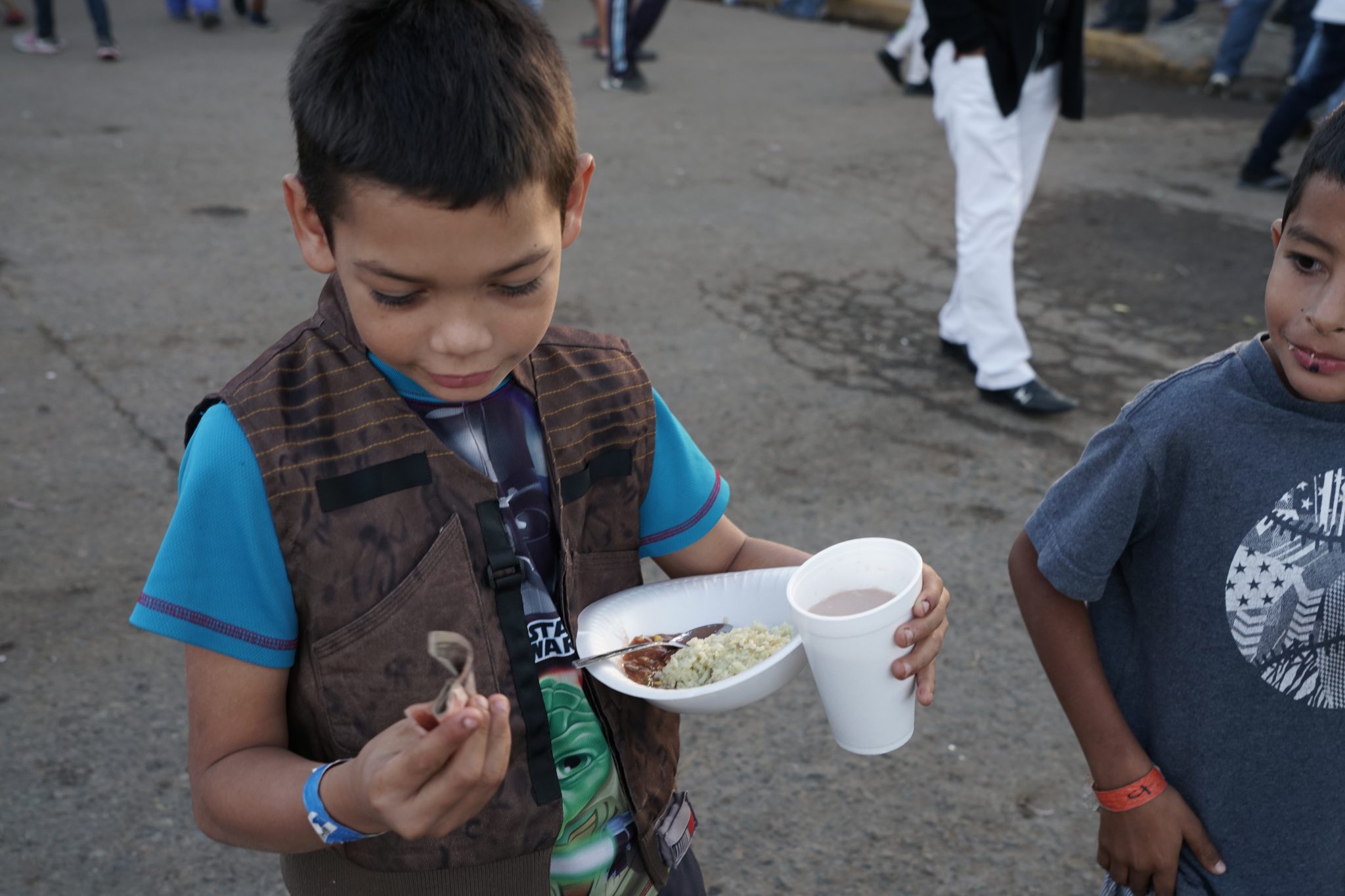 A boy asks to buy his money, Honduran currency, so he can get U.S. or Mexican currency to buy things needed. (Photo by Francisco Lozano/Latino Rebels)

On Sunday, tear gas was used to disperse a group of people trying to cross the border. U.S. officials claim that some immigrants threw rocks at the officers. Among the group, there were many women and children and, according to some, even pregnant women. 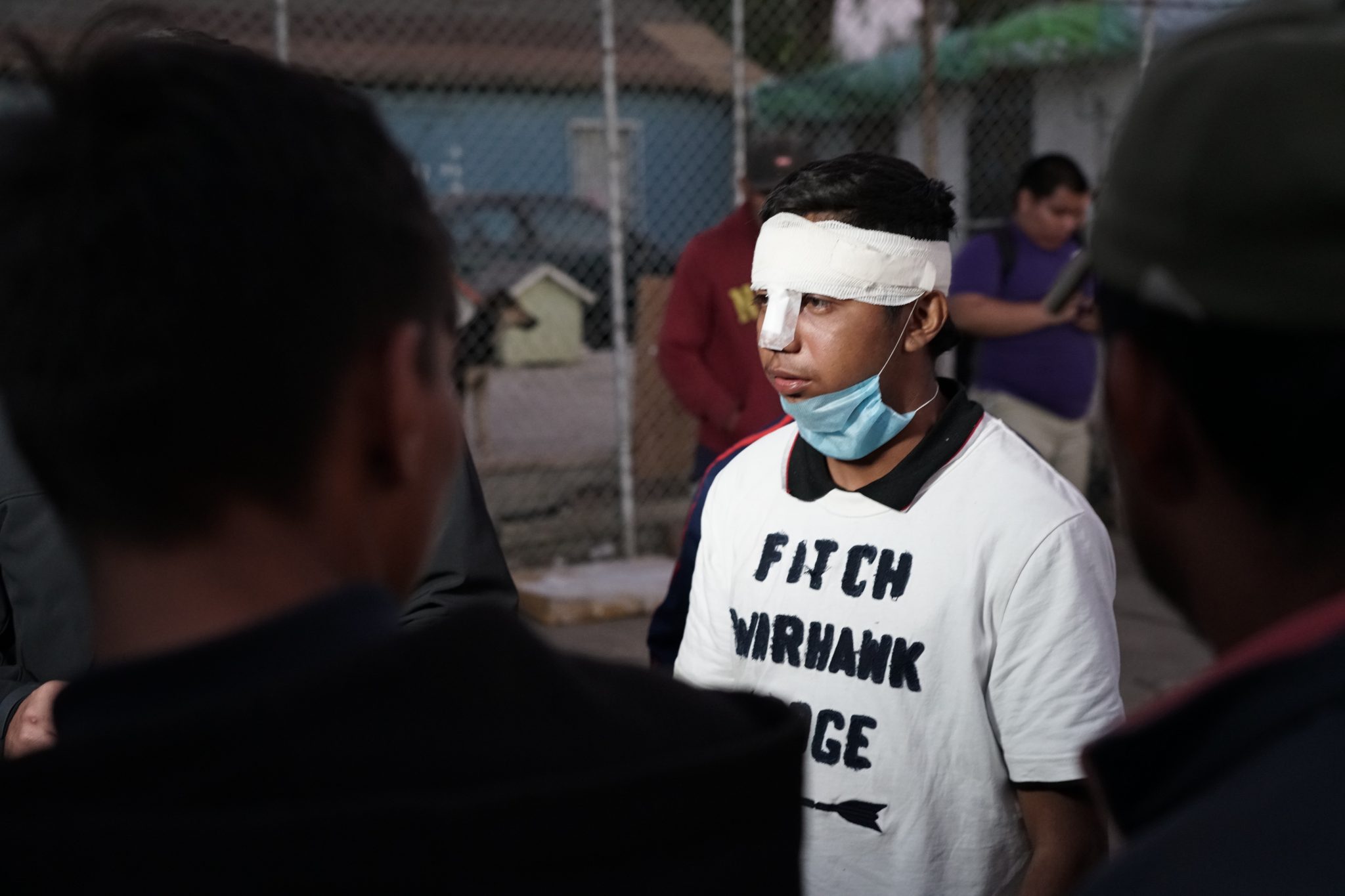 18-year-old Luis was hit by a tear gas canister on Sunday at the Chaparral border crossing in Tijuana. He got a head wound that required 12 stitches. (Photo by Francisco Lozano/Latino Rebels)

“It was sad to see little children cry and rub their eyes as they try to clear the burning from their eyes,” said Luis, an 18-year-old El Salvador national who suffered a head wound from one of the tear gas canisters. Luis said he was fleeing violence from his country only to encounter U.S. Border Patrol. 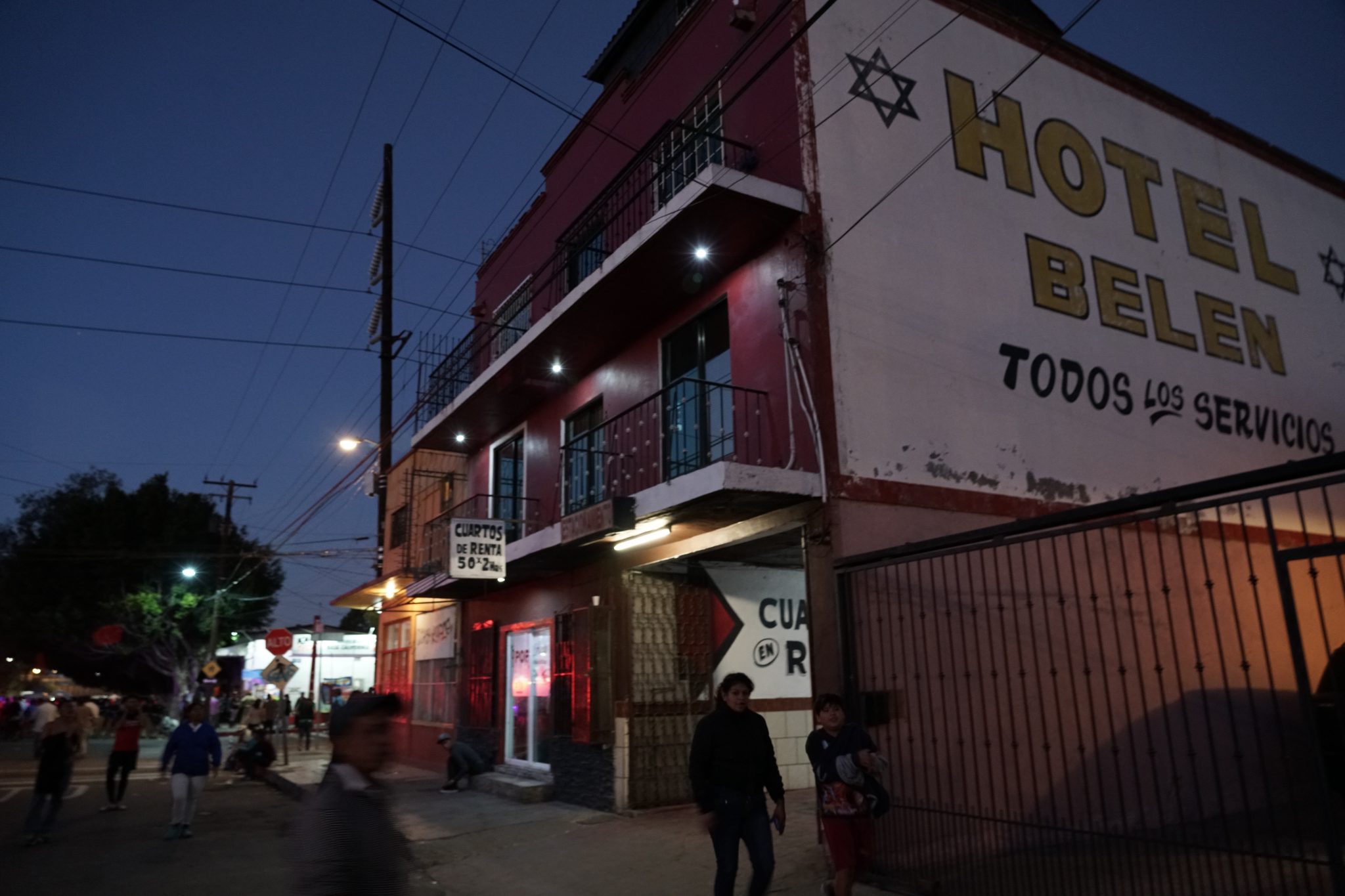 Migrants living in the streets of Tijuana walk past a hotel to go to local store to buy goods needed. (Photo by Francisco Lozano/Latino Rebels)

The immigrants are basically homeless and staying at the Benito Juárez shelter, a sports field that local officials and humanitarian groups have turned into a tent city. The overflow crowd stays in the streets, in makeshift tents.

Migrant men sit on a barricade near the encampment as night settles in. (Photo by Francisco Lozano/Latino Rebels)

The conditions are deplorable, and the stench of human feces in portable latrines is unbearable—volunteers have to wear masks to diffuse the foul smell.

An aid worker uses a mask to deter the foul smell of human feces in the encampment. (Photo by Francisco Lozano/Latino Rebels)

The Mexican government doesn’t have the adequate resources to deal with the crisis and has called upon the United Nations to help. 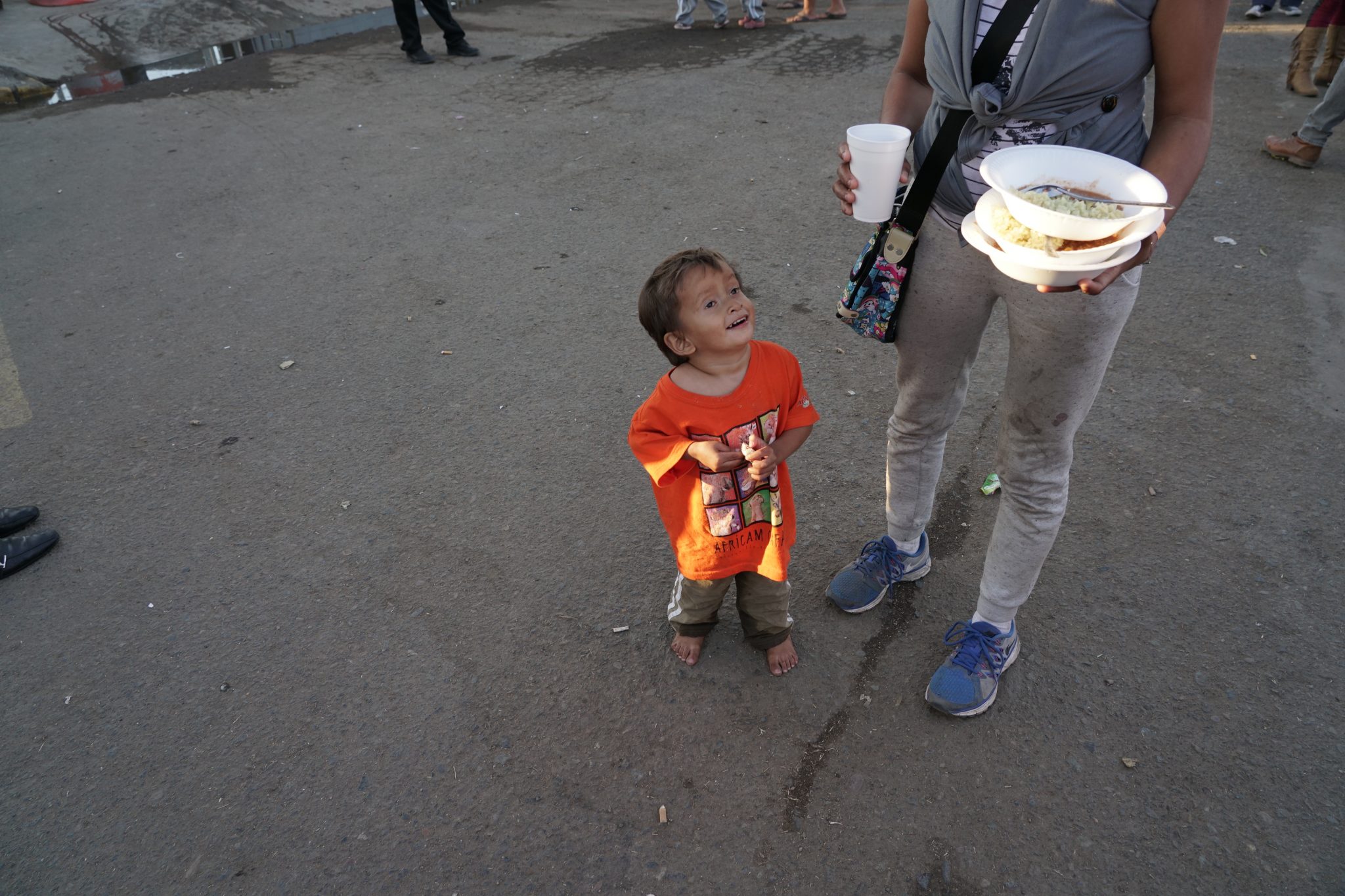 The asylum seekers seem weary and stressed, especially the mothers and children, but they seem to light up when given some aid.

A little kid runs of joy after him and his mother are given a ration of food by the Mexican Navy. (Photo by Francisco Lozano/Latino Rebels)

At supper, people line up to be fed by Mexico’s Navy. Men on one side, women and children on the other. One Marine officer offers water and candies, while others served hot champurrado and a hot meal. 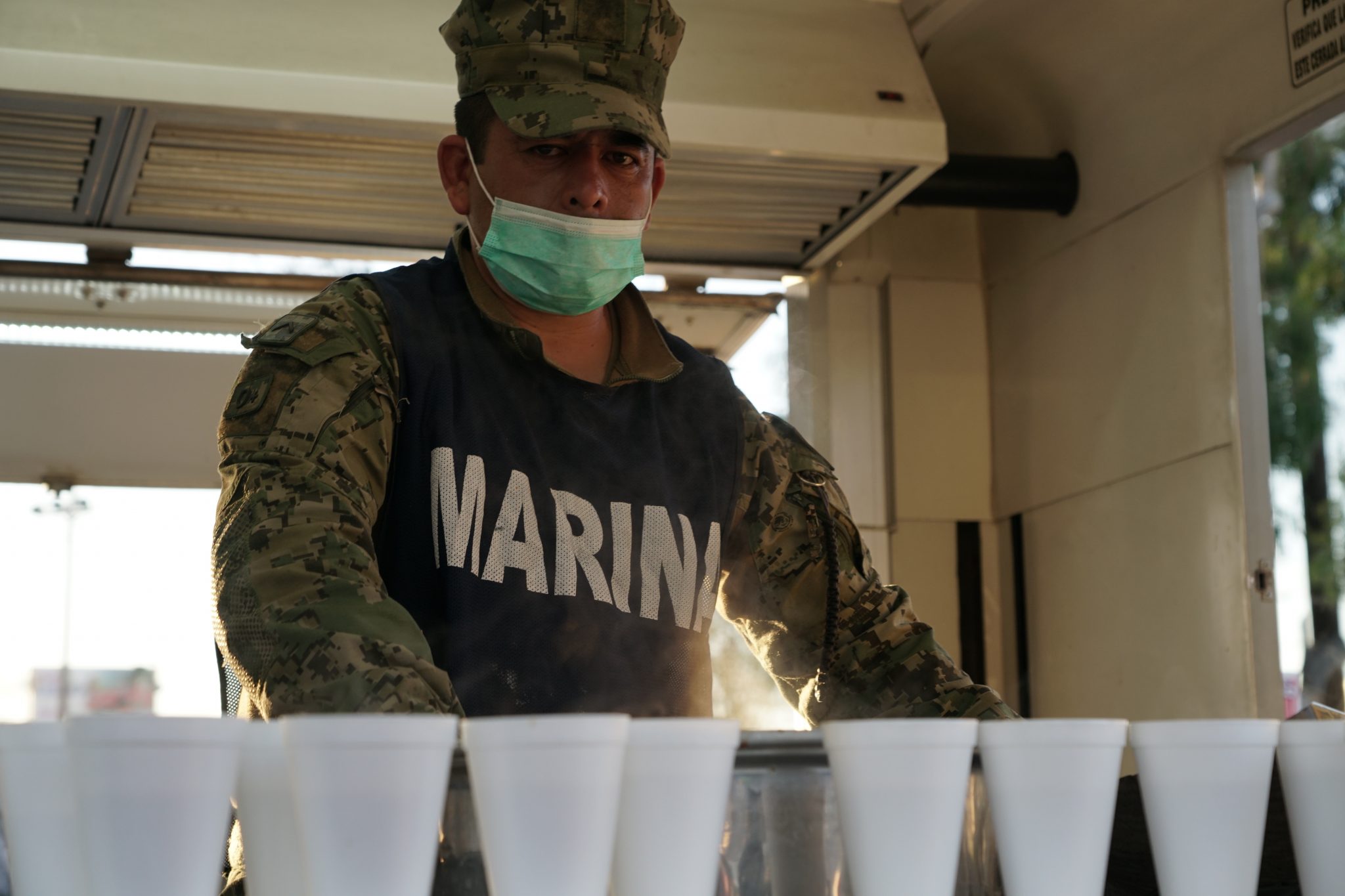 A member of the Mexican Navy serves hot drinks at dusk to asylum seekers. (Photo by Francisco Lozano/Latino Rebels)

“¡Qué rico!” said one mother as she tasted the Mexican hot drink. Central Americans are not used to the cold weather of Baja California as they come from a tropical climate. 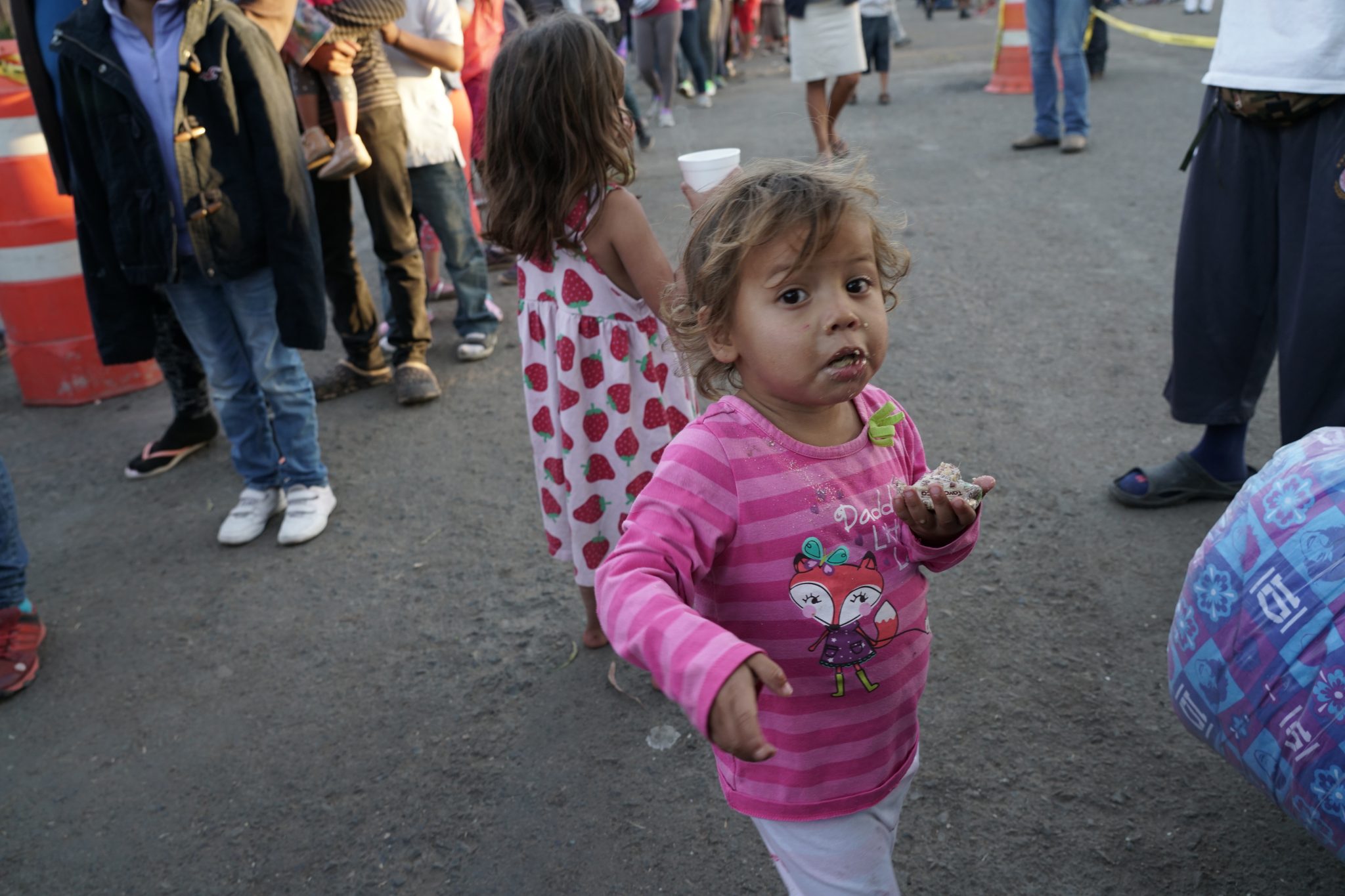 To bring some relief, people drive up and drop off clothing and other goods. 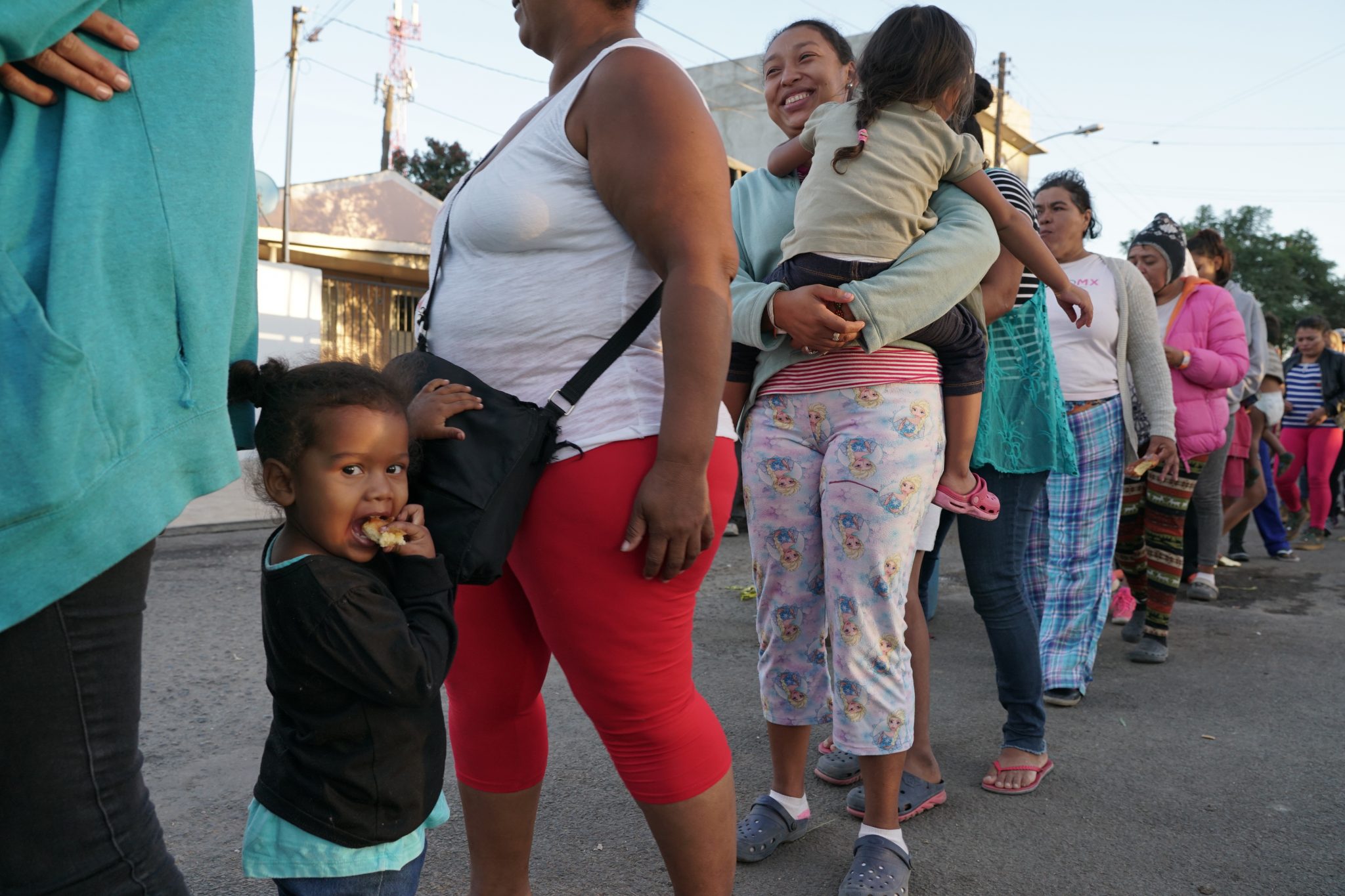 Women in children line up during supper rationing at the encampment in Tijuana, Mexico near the U.S. border. (Photo by Francisco Lozano/Latino Rebels) 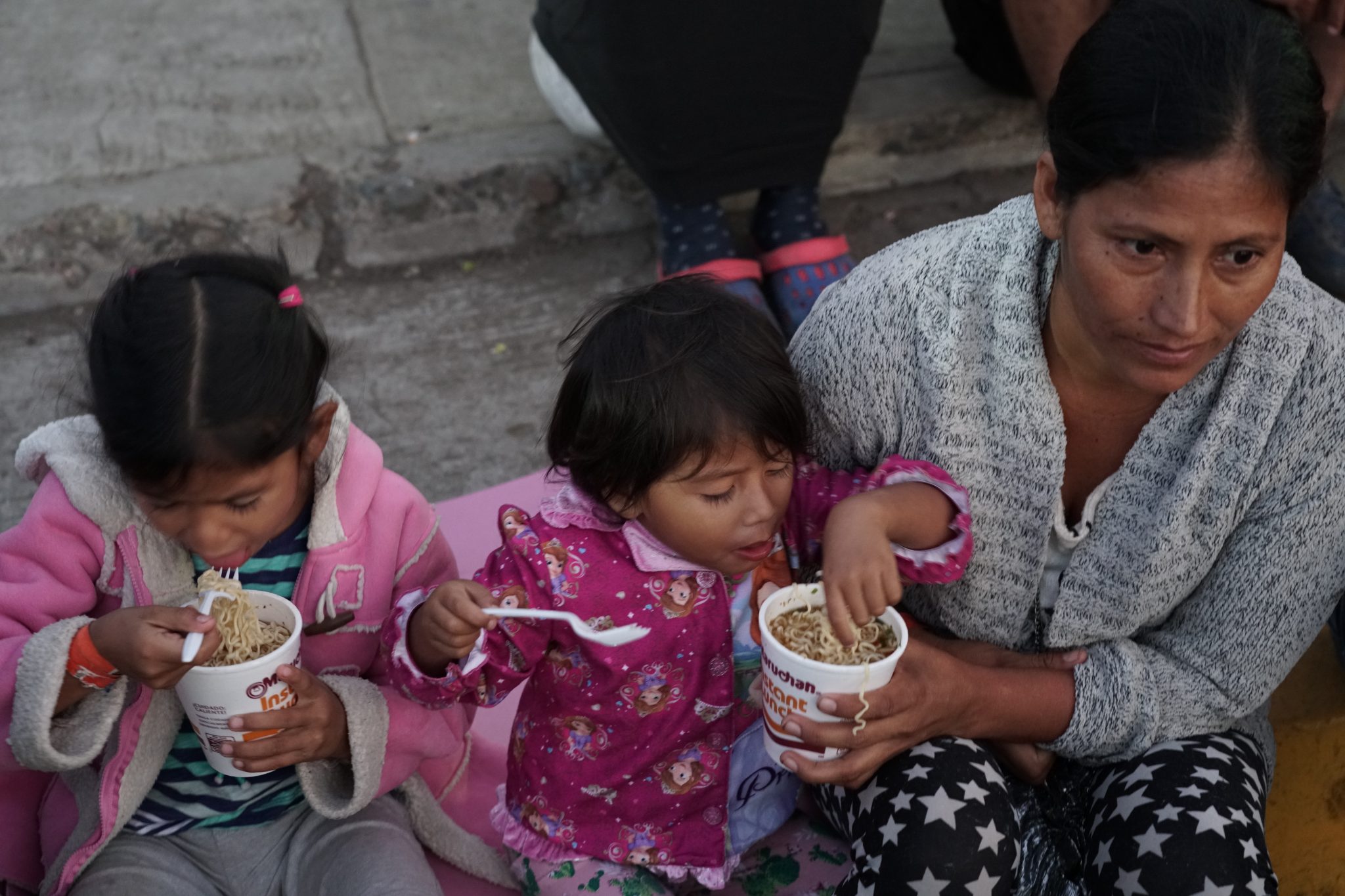 As dinner is being served, La Güera, a Honduran national named Mirna Contreras, who is known for her ranchera music interpretation, walks around with a loudspeaker on her back and a microphone, first singing a song calling for the Honduran president to be ousted. 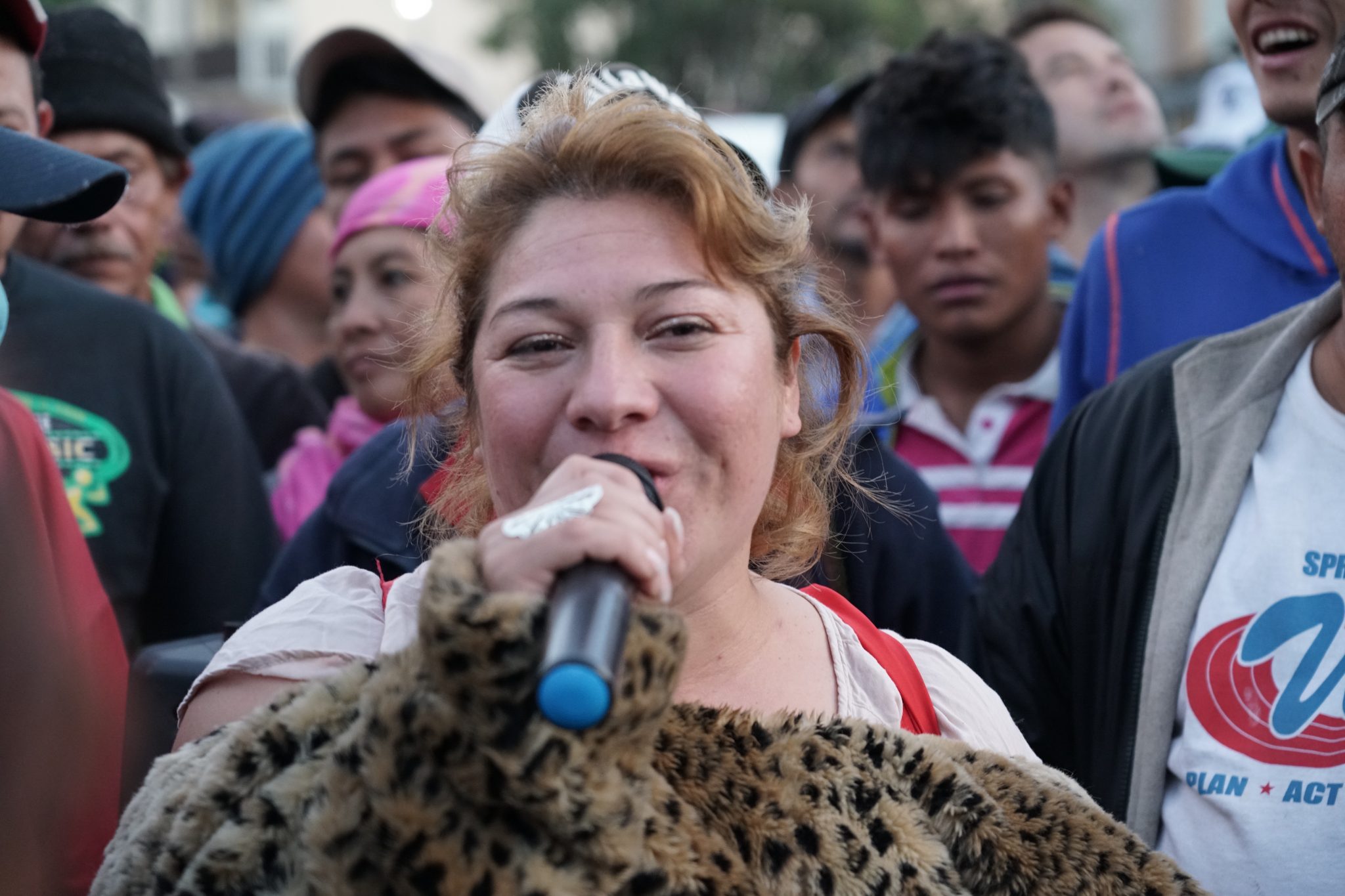 Later, she brought joy and comfort by singing some norteñas and ranchera tunes such as the Tigres del Norte’s “Tres Veces Mojado,” which translates to “three times a wetback.” 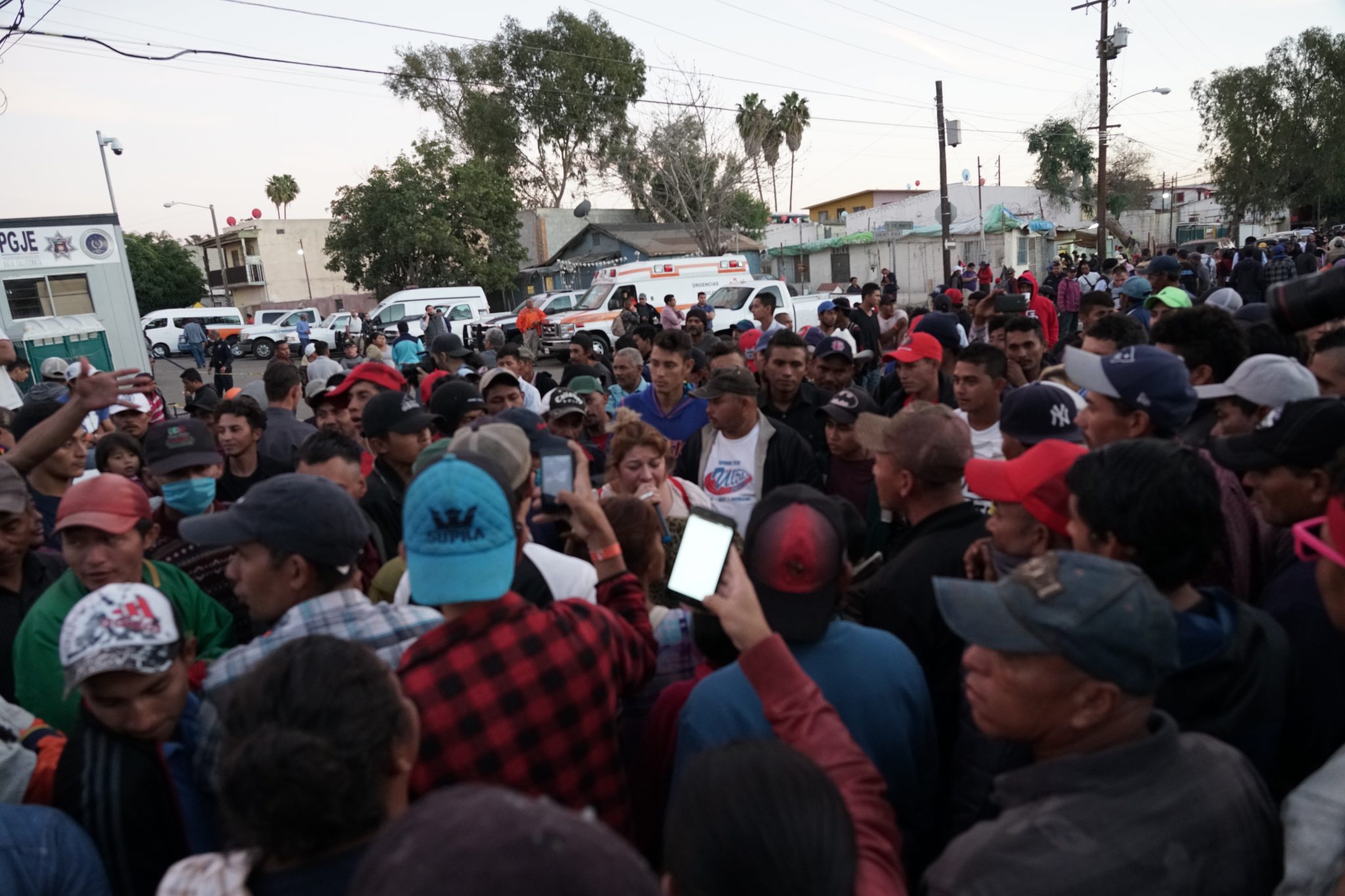 “La Guera” sings a tune protesting the Honduran government after a heated and tearful speech. (Photo by Francisco Lozano/Latino Rebels)

As La Güera sang, the crowd joined her, along with tears in their eyes. One of the ranchera songs spoke of a migrant telling her or his father that he or she was leaving for the north. She blamed the Honduran government for creating a crisis where people had to leave their home country.

A young mother of three breastfeed her youngest. She chose to remain anonymous in case she gets sent back for fear of her life. (Photo by Francisco Lozano/Latino Rebels)

“I don’t want people to see me, if I go back I fear for my life, the father of my children was killed,” said a 24-year-old woman, breastfeeding a baby while watching her two toddlers. She was worried of being interviewed on video camera. A tired migrant woman sits on the sidewalk with thank you signs above her in the streets outside the Tijuana encampment near the US border on Monday. (Photo by Francisco Lozano/Latino Rebels)

Many blame the U.S. intervention in the region through decades of civil unrest and revolutions as the cause of the instability, pushing mass migration from the 1980’s to the present. The U.S. supported right-wing regimes in El Salvador, Honduras, Guatemala, and Nicaragua while they committed human rights abuses. Among these crimes were U.S.-trained death squads.

Families seemed wearier now that they are in limbo at the border than they were during their travail through Mexico. Desperation and stress can be seen in the faces of women and children as they wonder why they are not being allowed to seek much-needed asylum.