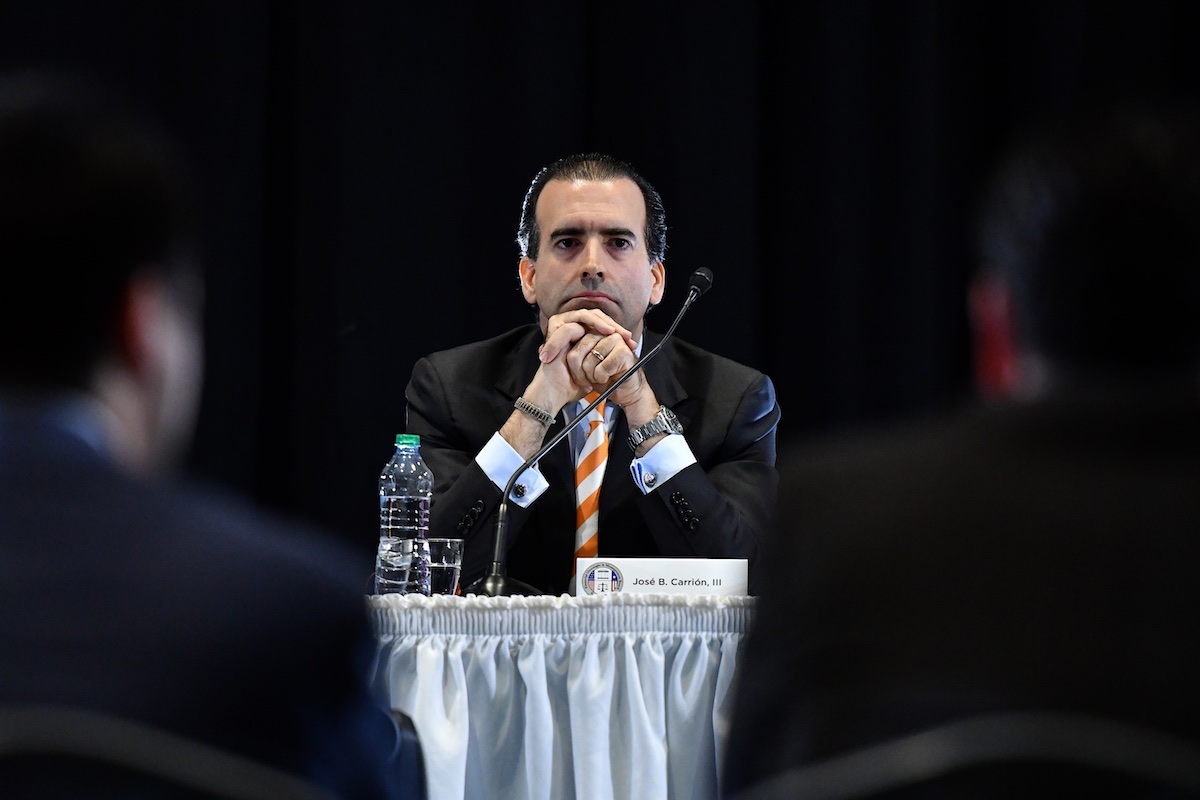 Puerto Rico’s federally-appointed Fiscal Board refused to deliver an unspecified number of communications between the entity and officials of Congress, the White House, Treasury and other federal agencies. As part of an access to information lawsuit brought by the Center of Investigative Journalism (CPI) a year and a half ago, the Board alleges that they are privileged documents and must remain confidential.

In a two-page letter dated November 21 and addressed to the CPI’s legal representation, Board lawyers Proskauer Rose argue that the disclosure of certain emails and related attachments would affect the island’s economy, capital markets, pending law enforcement investigations and “the ability to perform [the Board’s] statutory duties.” 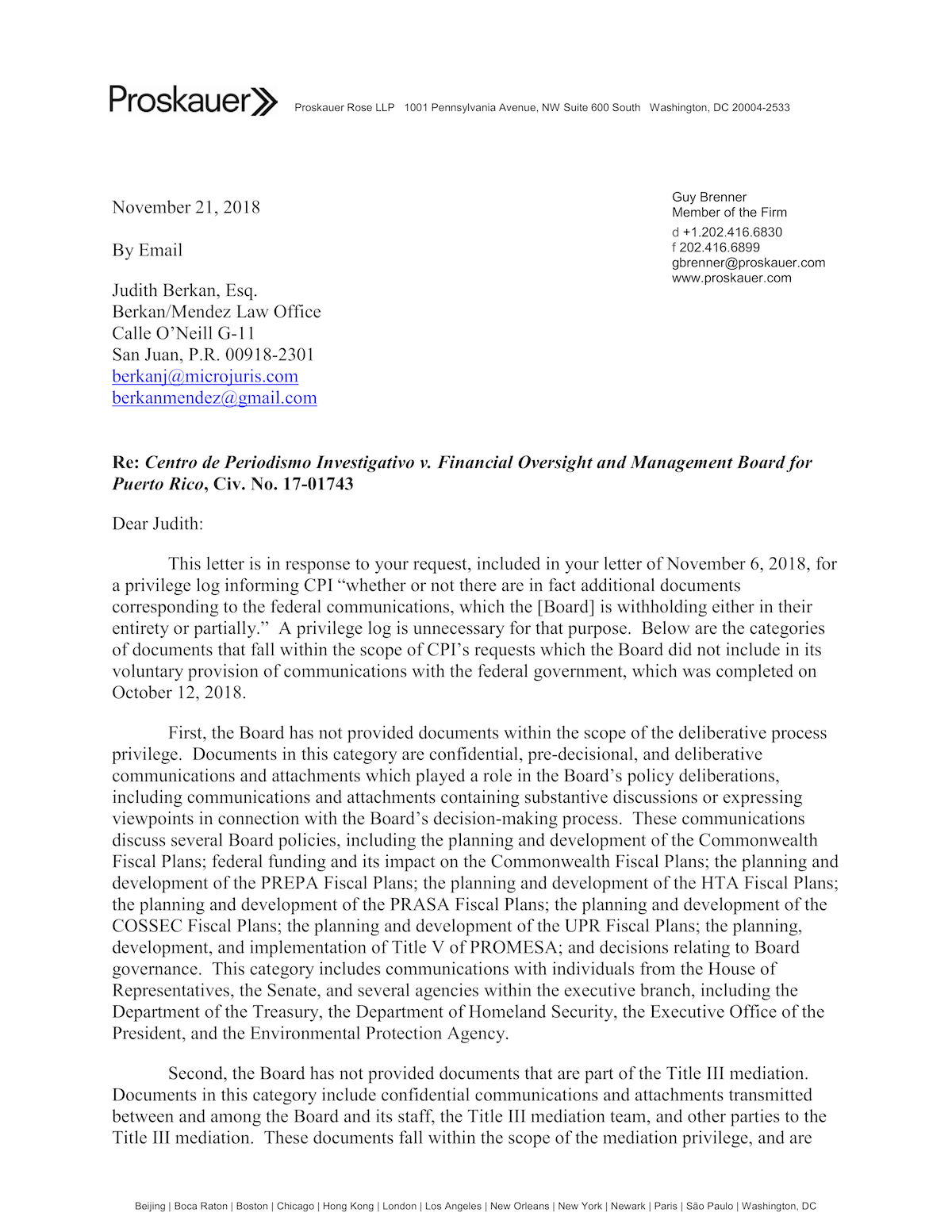 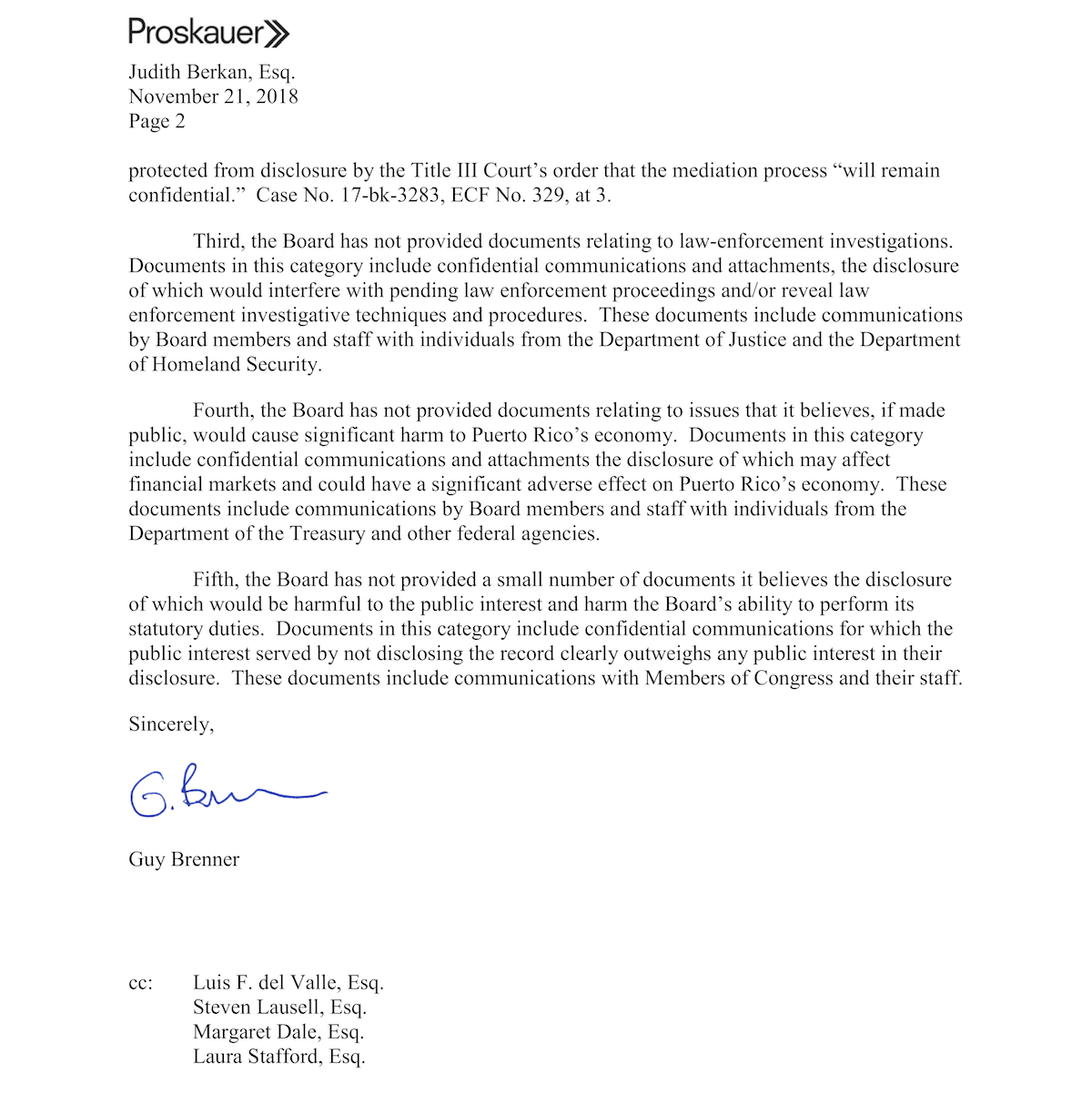 The entity imposed by the U.S. government through a federal law known as PROMESA only mentions broad justifications and descriptions for the withheld documents, the amount of which remains unknown, as are the names of those who are part of the communications that remain outside the public domain.

The CPI lawsuit against the entity aims to obtain access to communications between the seven-member fiscal panel and both federal and local government. In May, U.S. District Judge Jay García ruled in favor of the CPI and ordered the delivery of these documents, which are deemed public under Puerto Rico law. The Board —whose attorneys sought to dismiss the action, alleging there was no legal requirement to deliver the documents— did not appeal the court’s ruling.

After more than five months and missed deadlines, the Board made a partial delivery in early October, comprising more than 5,600 documents. Another data dump is expected by January, this time with communications between the entity and the government of Puerto Rico, according to Board lawyers.

The documents obtained to date include exchanges between Board members and officials and federal entities such as Congress, Treasury and the White House. CPI began to publish these emails on Wednesday, as part of a series called Puerto Rico Fiscal Board’s Emails.

What Was Not Delivered?

Under five broad categories, the Board left out of its document delivery certain communications between the entity’s officers and people in Congress, Treasury, the Department of Homeland Security (DHS) and the White House, among other agencies.

First, the Fiscal Board mentions the “deliberative process” privilege, arguing that internal conversations with federal officials prior to making public policy decisions must remain confidential. The letter indicates that these discussions include issues such as the development of fiscal plans, federal funds allocated to Puerto Rico, the use of Title V of PROMESA to accelerate “critical projects” of infrastructure and the Board’s governance.

Secondly, “a small number” of communications with members of Congress and their staff was not delivered because their publication would allegedly be “harm the Board’s ability to perform its statutory duties.”

“Documents in this category include confidential communications for which the public interest served by not disclosing the record clearly outweighs any public interest in their disclosure,” reads the letter signed by Guy Brenner, a lawyer with Proskauer Rose who represents the Board.

A third set of communications between the Fiscal Board and federal agencies such as Treasury was not delivered because releasing them “could significantly harm Puerto Rico’s economy,” as well as financial markets.

Another group of documents deemed as confidential by the Board relates to the ongoing mediation process between the commonwealth government and its creditors, subject to a confidentiality order signed by U.S. Judge Laura Taylor Swain, who presides over Puerto Rico’s bankruptcy cases. It opens the door to the possibility that the Board has either shared information related to mediation with federal officials or that U.S. government agencies participate of the court-ordered process.

Finally, communications related to “investigation processes of federal law enforcement agencies” such as the Department of Justice or DHS were not disclosed so as not to affect ongoing investigations or disclose investigative techniques.

According to federal Judge García, PROMESA does not protect the Board from being subject to Puerto Rico law in matters such as access to public information.

“Due to its close relationship with the First Amendment’s freedom of speech and association, and the right to seek redress from the government, the Supreme Court of Puerto Rico has declared access to public information a fundamental right under Puerto Rico’s Constitution,” reads the ruling that orders the delivery of the requested documents as part of the case brought by the CPI against the Board.

The federal judge warns that this right to access to information is not absolute and there are certain exceptions recognized by local courts. He adds, however, that “any attempt by the Board to protect documents from disclosure must be adequately supported by Puerto Rico law on this subject.”

In its letter, the Board does not mention Puerto Rico law, nor direct references to the five exceptions recognized by the commonwealth’s Supreme Court. These include instances in which a law provides for the confidentiality of certain information, tt is material protected under the local Rules of Evidence or third-party constitutional rights could be affected or the identity of an informant would be put at risk.

There is also what is known as the executive privilege to keep so-called “official information” as confidential, a concept that includes documents that are part of the “deliberative process.” Puerto Rico courts, however, have been emphatic that this privilege is not absolute either and the State can’t claim it in a generalized manner.

“Thus, in the face of a balance [of interests] inclined against the privilege, the government  —in due time— will have the obligation to ‘present evidence and demonstrate the existence of pressing interests of higher rank than the values protected by this freedom of information right of the citizens,” reads the ruling of local Supreme Court Justice Roberto Feliberti, as part of a lawsuit brought in 2017 by former Senate President Eduardo Bhatia against the administration of Governor Ricardo Rosselló . This action sought to obtain budget documents exchanged at that time between the Board and the commonwealth government.

Earlier this month, the CPI’s legal representation —led by Judith Berkan and Steven Lausell— required as part of the production what is known as a “privilege log,” a list of those documents that are not part of the delivery under legal arguments. The log should include enough information to object, if necessary, any claim of privileged material, as well as the names of people who participate in the exchange of these documents, among other details.

The Board argues in its letter that a privilege log doesn’t need to be delivered at this moment.

This is the second story of the series Puerto Rico Fiscal Board’s Emails.