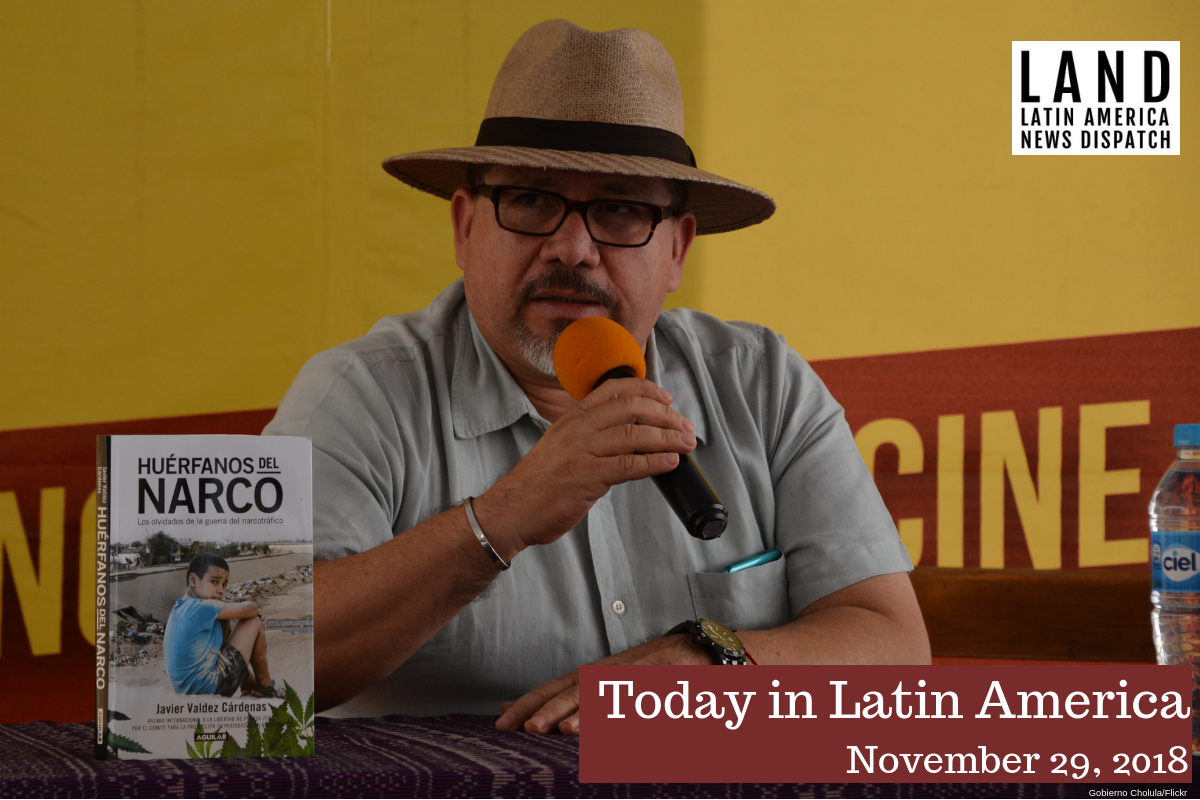 Murdered journalist Javier Valdez at an event in 2015. (Photo by Gobierno Cholula/Flickr)

MEXICO: Following the 2017 killing of journalist Javier Valdez, his friends and colleagues were targeted with government-linked spyware according to a Citizen Lab report released on Tuesday. At least 24 individuals close to Valdez received text messages containing a link to spyware bought by the Mexican government from NSO Group, an Israeli company. The spyware, known as Pegasus, infiltrates individuals’ electronics and is able to freely gather information without detection.

The New York Times reported last year that the spyware was used to surveil international investigators involved with the case of the 43 students. Among those targeted were journalists from Río Doce, a new site co-founded by Valdez. The organization is one of few independent news outlets covering the nexus of crime and corruption in Mexico.

MEXICO: The Peña Nieto administration will end its tenure with poor elementary education numbers. According to a study released on Tuesday, six out of 10 sixth graders are only able to do basic math operations and five out of 10 sixth graders struggle with sentence construction. Last year, the Public Education Ministry spent more money on communication matters, including advertising, than it did on training teachers.

HAITI: The body of a customs agents was found yesterday in Lake Azuei, which makes it seven the people that died during a riot at the border last Tuesday. The riot began after an agent allegedly shot a person who tried to cross the border with the Dominican Republic without stopping. The agents were burned to death by a group of citizens, according to media reports.

GUATEMALA: The Constitutional Court ruled that President Jimmy Morales can’t stop Iván Velásquez, the UN-backed anti-corruption prosecutor, from reentering the country. As part of the ruling, the Ministries of Government and Foreign Affairs will have to send a report to the Court to explain the reasons they haven’t allowed the prosecutor back to the country.

BELIZE: The Belizean Cabinet reported that Prime Minister Dean Barrow won’t resign from his position. Six months ago, Barrow announced he would retire before his five-year term was completed on 2020. The Prime Minister will remain in office due to the urging of the Cabinet.

BRAZIL: Brazil will no longer host next year’s special United Nations climate conference, the Foreign Ministry announced yesterday. The conference, scheduled for November, was intended to finalize details of the Paris climate accord. The ministry cited costs as its rationale for canceling the event, but there is already speculation that the reversal is due to the presidential election of Jair Bolsonaro, a far-right climate change skeptic.

CHILE: Center-right President Sebastián Piñera signed a bill into law yesterday that will allow young people above the age of 14 to change the names and genders on their government identification. The bill took five years to pass in Congress due to intense religious opposition and was celebrated by LGBT advocates as a possible turning point for the traditionally conservative country.

ARGENTINA: Just days before the G20 summit kicks off in Buenos Aires, a federal judge reportedly accepted a crimes against humanity writ against Saudi Arabian Crown Prince Mohammed bin Salman yesterday. The suit, brought by Human Rights Watch under a universal jurisdiction clause in the Argentine constitution, relates to bin Salman’s bombing campaign in Yemen and alleged torture of Saudi citizens. The federal judge will now have to determine whether bin Salman is covered by diplomatic immunity and whether other, similar cases are already being pursued elsewhere.