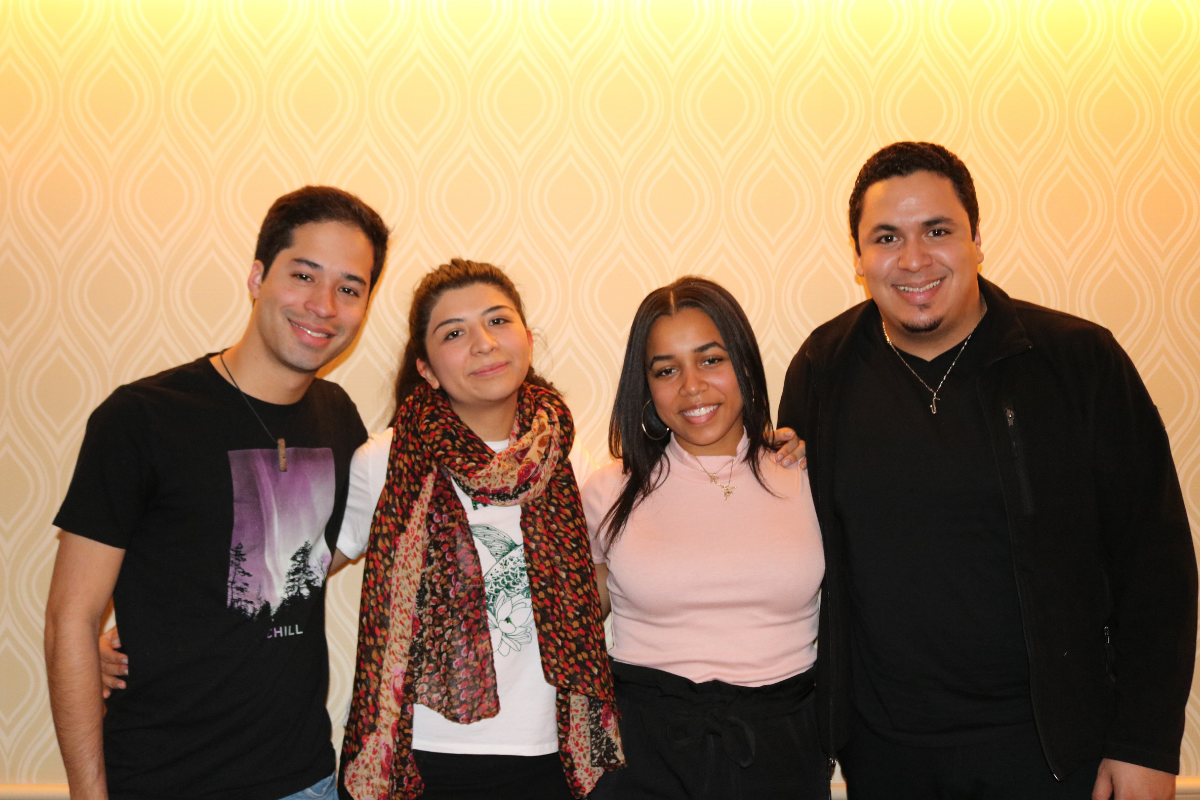 The four Latin Grammy Cultural Foundation scholarship recipients who had the opportunity to attend the Latin Grammys. (Photo by Marlena Fitzpatrick).

LAS VEGAS — Crossing many Latin genre thresholds, the anti-climactic 19th Annual Latin Grammys enlisted as nominees the most popular hits and recognizable Latin music figures of the year. While debates continue about the role of reggaetón at this year’s awards —some were displeased by the overwhelming coverage of the genre for its misogynistic lyrics, while others felt the genre was snubbed— there were other notable moments, such as Linda Briceño’s historic win as Producer of the Year. The trumpet player and jazz master became the first woman ever to win the coveted award. Another highlight is the inspiring selection of students who were awarded scholarships by the Latin Grammy Cultural Foundation, four of whom were selected to attend the awards.

The Latin Grammy Cultural Foundation was launched four years ago by The Latin Academy of Recording Arts & Sciences (LARAS). Focused on preserving, fostering, and elevating Latin genres, the organization selects gifted Latin musicians and scholars, currently studying music in their respective universities. After a rigorous examination process, they’ve awarded over 150 scholarships to Latin students all over the world. This year, four scholarship recipients had the opportunity to come to Las Vegas, walk the red carpet, and attend the Latin Grammys.

Understanding the demographic targeted by these shows, the imbalanced approach to art and entertainment leaves an unbridged gap: it fails to show the rich and diverse Latin musical cultures, and the upcoming masters of their respective fields, often working behind the scenes. Like Briceño, the students reflect an embodiment of true musicianship, with sophistication, complexity and dedication seldom showcased in these popular award shows. They are an uprising of new Latin artists hell-bent in creating and preserving the diverse genres in Latin America with the quality and respect it deserves. 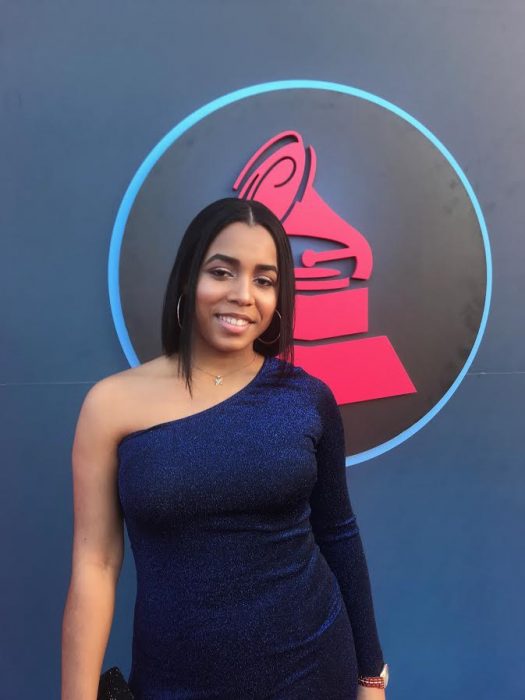 Gabrielle Garo is a Latina from Brooklyn of a Dominican father and African-American mother. The talented instrumentalist plays flute, piccolo, and alto, tenor, and soprano saxophone. Like Briceño, she studies at The New School for Jazz and Contemporary Music. 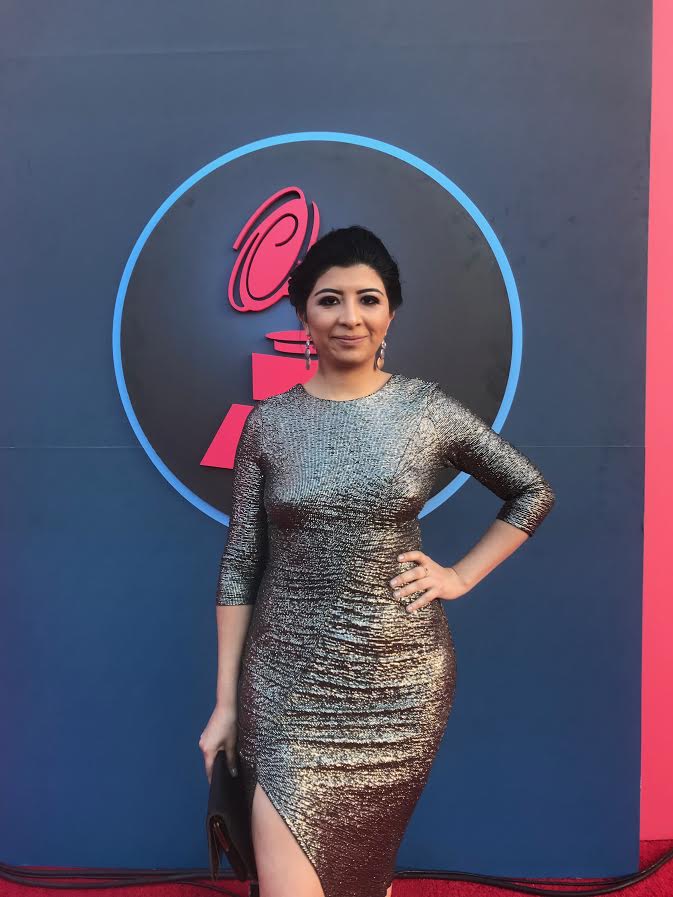 Guitarist Jhoely Garay comes from Mexico, and thanks to the scholarship, she now studies at The City College of New York.

Venezuelan Raúl Marcano plays clarinet and studies at the University of North Texas. 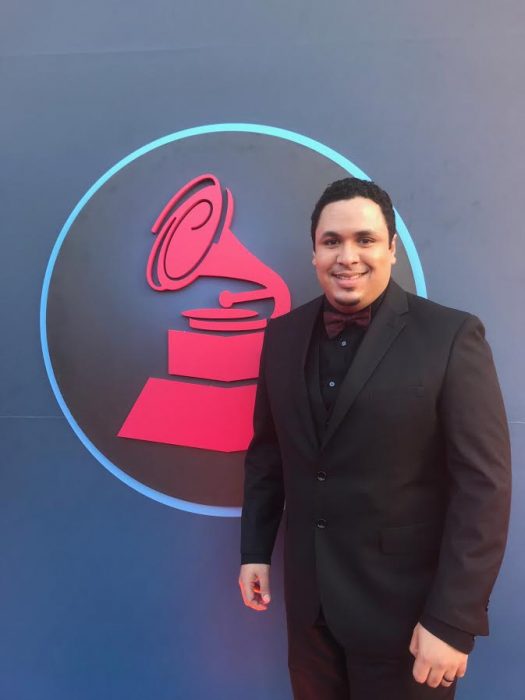 Latino Rebels had the chance to talk to these musicians about their music, their Latinidad, and their main inspirations. Read the conversation with the students and rising stars below.

Fitzpatrick: What inspired you to apply to the Latin Grammy Cultural Foundation scholarship?

Marcano: I first arrived from Venezuela to a small school in Boston. A couple of other Latino students had won the scholarship the year before, so they invited me to apply.  Now I study at the University of North Texas, my undergraduate in Classical Clarinet Performance and it covers part of my tuition.

Suncar: I came here last year from the Dominican Republic and started my studies in Berklee [College of Music]. It was very difficult for me because I couldn’t complete the tuition. My family didn’t have all the resources to fund my tuition. The scholarship helps me cover it. I study contemporary composition and production. I play saxophone: Jazz and Latin Jazz.

Garo: This is my third year with the scholarship. This is my senior year of undergraduate, but also the first year of my Master’s degree. My Master’s will be in Arts Management and Entrepreneurship from The New School.

Garay: I knew about the scholarship because a friend of mine from Mexico told me about it. At that time I was very insecure about my playing and capacities. Some of my teachers were pushing me too much. That affected my self-confidence. One of my friends told me “just do it. It’ll be a great experience whether you win it or not.” At that moment I decided to do it.  I didn’t care what teachers and others told me, I made it my own process as a musician. The scholarship process made me more confident about myself, about my music and about who I am. This is my second year and I study guitar at CUNY.

Fitzpatrick: How do you incorporate your Latin heritage into your music and what or who are your main influences?

Garo: It’s definitely contributed in exercising the right to play it and actually playing with real musicians. I’ve been so fortunate and blessed to play with living legends who’ve really impacted my point of view, and the way I feel I should play. One of the artists is Bobby Sanabria, who I played with at “West Side Story Re-Imagined.” This is something that I want to do; playing music and giving back and being inspired by Latin greats.  My inspirations are Bobby Sanabria who encouraged me to write my first composition. I’m definitely influenced by Dave Valentin, my teacher Nestor Torres, Larry Harlow, Paquito D’Rivera and many others.

Suncar: My great-great grandfather played the saxophone. I never met him. It’s in my DNA. It feels natural to play Latin jazz. I started listening to Paquito D’Rivera, who is my main influence. Now I have the opportunity to play with him. My favorite saxophone player is Eric Marienthal. He played with Chick Corea. As a Dominican, my main inspiration is Juan Luis Guerra because he studied in Berklee and he showed the world you can play who you are; what comes intuitively, naturally. I love playing merengue. It’s who I am.

Marcano: My parents are also musicians. They played in “El Sistema“for years. They also played at the Simón Bolívar Symphony. I got a taste of the Latin American repertoire because classical music tends to be skewed towards European music. The classical canon sort of revolves around that. Now I think there are some pieces by Latin American composers that made it into the canon like Arturo Márquez, and Alberto Ginastera. I’m with Rafael and Gabrielle, I’m inspired by Paquito D’Rivera, and I’m also influenced by Ricardo Morales, and Alexis Cardenas. For me, playing Latin music is what comes naturally, however. Is like trying to learn a new language. No matter how perfect I speak the language I’ll still have an accent. That’s what playing other genres is to me.

Garay: I mainly play Latin jazz and folk. My main compositions are bossa nova, son and suites. To be honest, I wasn’t conscious about my Latin influence until I started composing, because I wasn’t thinking about my roots and Mexican music. It just came up in my compositions. It’s ingrained naturally. My main influence is Maria Grever. I love her music and her lyrical content is superb. I would love to play with Rubén Blades in the future.

Fitzpatrick: Raúl, you’re mentioning some Latin American composers most people may not even heard of. What are you doing to learn about these composers?

Marcano: I think the Latin repertoire is underrepresented. At times when people think of classic Latin American music, the first thing that comes to mind is [Astor Pantaleón] Piazzolla. I actually try to avoid him because is overdone. I make an effort to play others that are as equally as good. There are many Latino composers here in the USA we need to learn from, like Venezuelan Ricardo Lorenz. I have a clarinet quartet and for our next recital we’re going to play pieces by Arturo Márquez and Aldemaro Romero. I research and integrate these composers in my coursework.

Fitzpatrick: Jhoely, you came from Mexico to study. Was your family supportive of you studying music?

Garay: All the members of my family are accountants. Some of my aunts are lawyers and doctors. I started playing when I was 12. One day I went to this store in Mexico and I saw old men playing guitar. I noticed they were playing jazz. I went home, did some research and started listening to a lot of jazz. That’s when I decided I wanted to do this as a career. My family is all about sciences, and math, so I told them “I want to be a musician.” The thing is, I have always been good in science and physics; I even won a prize in math and literature. So, my parents were scared that I wouldn’t get a good job or have enough money. They told me “you can do this, but first you must have another career like psychology.” It was a hard time for me. I had to move out of my house because it became a rough situation with my studying music. For six months I lived with my uncle and then I talked to my mom. I asked for her support. Once I won the scholarship, they changed their minds. They’re putting their heart and soul in what I’m doing now.

Fitzpatrick: Gabrielle, you have an enviable body of professional work already. Have you faced any discrimination?

Garo: I went through the “you’re a woman in music. I guess it’ll work out for you,” type of commentary. This comes from people who don’t understand the culture; who have a mindset so far back in time where they haven’t adapted, and really not broaden their thought process. To change it, I think is definitely recognizing any divide within our history, what we’ve been through… segregation, discrimination. Is recognizing that, and then putting to work the art form that you want to share; demonstrate and say “yes, we are powerful,” “yes, we will do this.” Truth is, we’ve been doing it. We are voice within the industry playing this kind of music.

Fitzpatrick: Rafael, you’re also studying production. What are your hopes for your future within your music career?

Suncar: I would like to continue to play but also work as a producer, since I’m studying that in Berklee [College of Music]. I want to take on production because it gives me the chance to be more musically creative, and self-create work. I would also love to establish a music school in my country. It could be in my hometown or close. I want to help bring music to my people. There are a lot of people that want to learn music, but don’t have the resources, funds or instruments. We need to make music accessible.

Fitzpatrick: So, to end, which genres outside of the ones you currently study would you like to play someday?