The 4 Stories We Read the Last Few Days to Remind Us That George H.W. Bush Did a Lot to Destroy Latin America 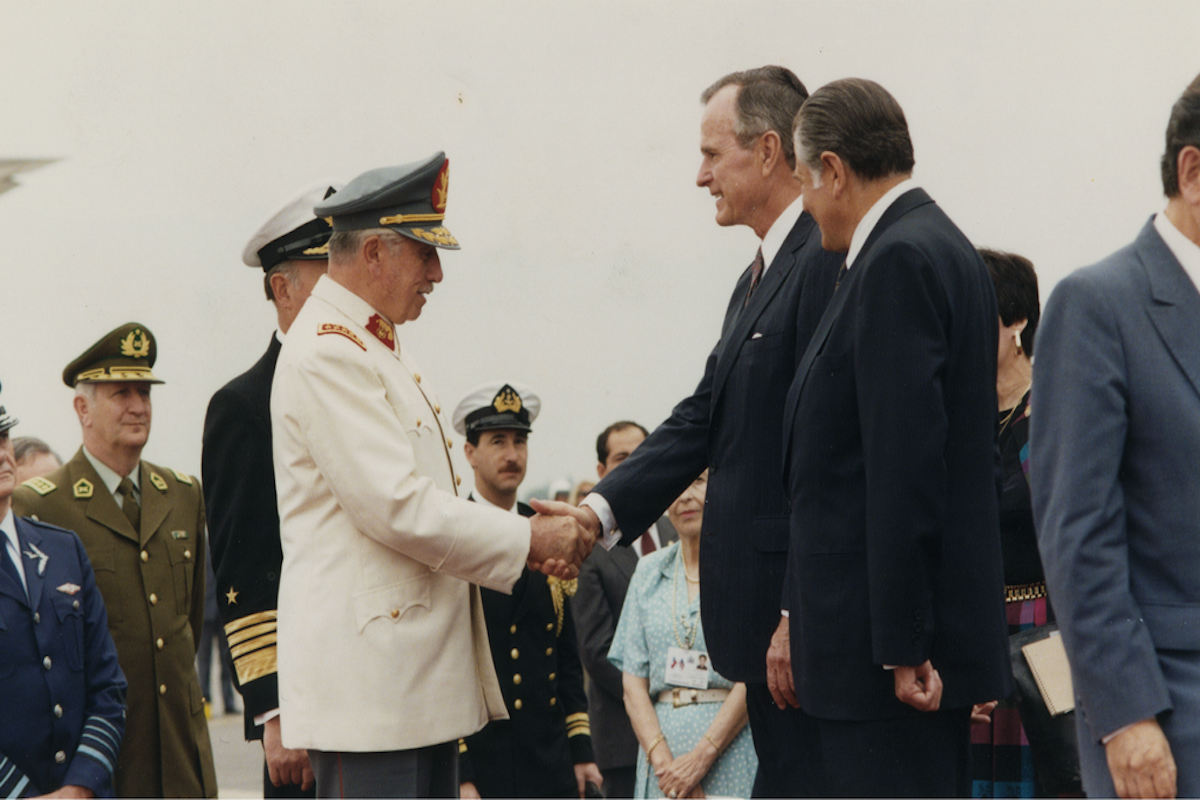 Pinochet and Bush in the early 90s. (LINK)

Hey, we get it. When American Presidents pass away, the English-language corporate media machine goes into full gear and pays loving tributes, to the point that the reports tend to romanticize accomplishments. It makes sense, especially in a current U.S political age that longs for “civility” and “bipartisanship.” So we don’t fault anyone at all if they want to just focus all the good that late President George H. W. Bush did in his lifetime. If that is how you want to remember his life, go for it. It’s totally cool.

However, there is still something a bit over the top about how much the U.S. media is gushing over Bush’s death, as if some accomplishments are literally being whitewashed, ignoring a big part of his history, one that (whether you like it or not), directly impacted Latin America since the 1970s.

It is a sentiment not limited to just us as a group, because to be honest, we saw a lot of things on our feeds this past weekend. Here are just a few:

I will take a moment 2 remember the 100s of 1000s of Central American mem,women & children, innocents slaughtered by death squads, Contra extremists,Kaibiles & others directly & consistently backed by #Bush41 throughout the 80s & early 90s. You lionize him as hero. We don't.

??You’re right. Among so many places, spare a thought in particular for the victims of his US invasion of Panama. Anniversary is this month.??

We are sure that for some, responses like those above might be seen as not “classy” this week. But the truth is the truth, and for that reason, we have been spending a lot of time reading up on why for many Latin Americans, Bush 41 is not the champion being celebrated today. Here are just four of the pieces we caught up on the past few days:

1. “George HW Bush thought the world belonged to his family. How wrong he was” by Ariel Dorfman for The Guardian

A very personal essay by Chile’s Dorfman published by The Guardian on December 2 said this:

But our aversion had more personal roots: Bush had operated as head of the CIA from 30 January 1976 until 20 January 1977. As such, he was undoubtedly privy to exhaustive information about the devastation being inflicted by the US-supported Pinochet regime in Chile, at a time when opponents were being disappeared, concentration camps were still open and torture was rampant. During his tenure, the American government facilitated the infamous Operation Condor, run by the intelligence services of six Latin American dictatorships to coordinate their repression of dissidents. Perhaps most inexcusable was that Bush remained unrepentant of his country’s involvement in so much suffering. Had he not stated —when an American missile had blown up an Iranian aircraft with 290 innocent civilians aboard in 1988— that he would ‘never apologize for the United States of America. Ever. I don’t care what the facts are.'”

2. “George H.W. Bush, the CIA and a Case of State-Sponsored Terrorism,” by Robert Parry for Consortium News

Parry’s piece from 2000, which was republished on December 2, served as a historical reminder to us all.

As the editor’s note said: “Forty-two years ago, a car-bomb exploded in Washington killing Chile’s ex-Foreign Minister Orlando Letelier, an act of state terrorism that the CIA and its director George H.W. Bush tried to cover up, Robert Parry reported on Sept. 23, 2000.”

You should go and read that 2000 article.

3. “Manuel Noriega, the Invasion of Panama and How George H.W. Bush Misled America,” by Peter Eisner for Newsweek

We went back to this story by Eisner to remember why the U.S. would invade a country in 1989. These two grafs explained a lot.

The Panamanian general had spent part of his military career on the CIA’s payroll. As a student, he was a paid informant on leftist activities. Later, as intelligence chief in the 1970s for his mentor, General Omar Torrijos, Noriega earned the trust of the CIA and its onetime director, George H.W. Bush. And as Panama’s supreme leader in 1983, Noriega helped the United States avert a major conflict with Cuba during President Ronald Reagan’s gunboat invasion of Grenada, by acting as a go-between with Fidel Castro.

Noriega’s friendship with the United States wavered, then collapsed, as Reagan and Bush pursued an anti-communist policy in Central America, giving military and financial aid to right-wing governments and “freedom fighters” against leftist guerrillas in El Salvador and Guatemala and the leftist Sandinistas in Nicaragua. The general refused to help. Those were the years of Marine Lieutenant Colonel Oliver North’s abortive campaign to fund Nicaraguan insurgents—the Contras—with money raised by selling weapons to Iran. The scandal, known as the Iran-Contra affair, almost brought down the Reagan presidency.

Then, later in the story:

Bush justified the invasion —code-named Operation Just Cause— on national security grounds. Noriega, he said, was a drug dealer who had declared war on the United States, threatened the lives of Americans living in Panama and now threatened the security of the Panama Canal. None of that was proved true. Noriega had not threatened America, and a Panamanian attack on the canal was not even possible. Even without an invasion, the United States maintained Air Force and Navy bases; under the 1977 Panama Canal Treaty signed by Carter and Torrijos, the United States was responsible for security in the Canal Zone surrounding the waterway until December 31, 1999.

4. “The Dirty Secrets of George Bush” by Howard Kohn and Vicki Monks for Rolling Stone

A definitive story from 1988 that doesn’t shy away at all. This is the nut:

The subsequent investigation of the downed cargo plane revealed for the first time a connection between the office of George Bush and a clandestine campaign to arm the contras—during the 1984-86 period when the U.S. Congress had ordered a halt to CIA and Pentagon aid. In response to reporters’ queries, however, Bush’s press officers issued statements claiming that the phone calls from Rodriguez represented the only time that the vice-president’s office had played any role in the arms-supply campaign. Later Gregg expanded on the official denials in a deposition to the joint select committee investigating the Iran-contra affair. “We [Bush and Gregg] never discussed the contras,” Gregg testified. “We had no responsibility for it; we had no expertise in it.”

A ROLLING STONE investigation, however, has found that the denials of Bush and Gregg are part of a continuing cover-up intended to hide their true role in the Reagan administration’s secret war against the Sandinista government of Nicaragua. Bush and Gregg were, in fact, deeply involved in a previously undisclosed weapons-smuggling operation to arm the contras that began in 1982, two years before the much publicized Iran-contra operation run by marine lieutenant colonel Oliver North and financed by the sale of missiles to Iran. This earlier operation, known as Black Eagle, went on for three years, overlapping North’s operation. The idea of both operations was to circumvent congressional restrictions on the CIA and the Pentagon. Although conceived by William Casey, the late CIA director, these operations were not sanctioned officially by the CIA or other government agencies. They were the instruments of a secret U.S. foreign policy carried out by men who constituted a kind of shadow government.

You would think that stories like these would at least get mentioned because in the end, they did a lot to impact Latin America in a lot of ways.

And don’t get us started about NAFTA.

But we guess you can’t talk about this?

No way. We won’t stay silent:

Seriously, cable news media is literally whitewashing history during its #Bush41 coverage. This is why we as a country can't connect the dots. We have a great opportunity to educate Americans about Central American intervention of 1980s, but nah. That would be too complicated.