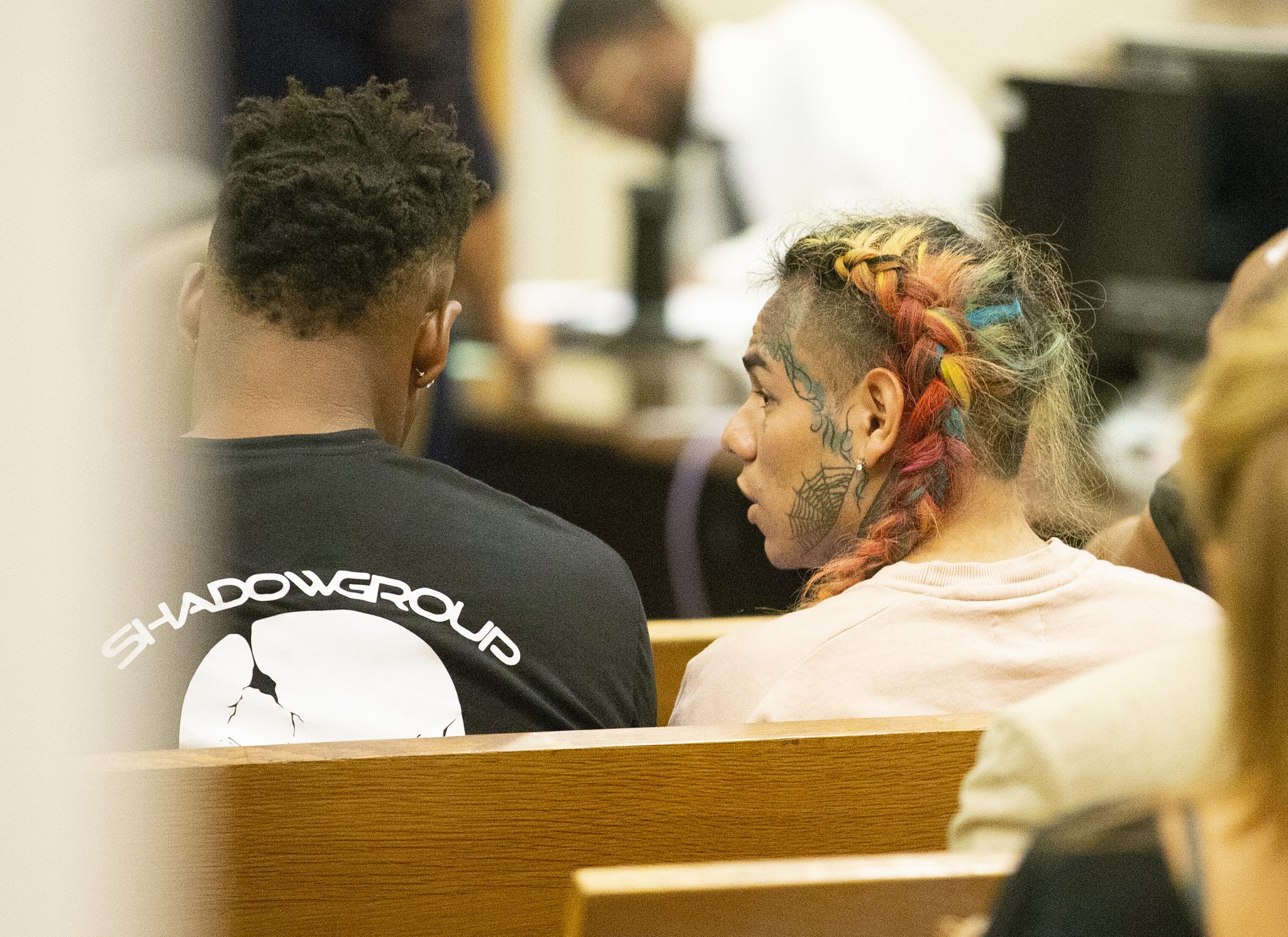 Rapper Tekashi 6ix9ine is known for his rainbow hair, aggressive lyrics and ongoing controversies–now it seems the rapper makes more headlines for his scandals and ironic philanthropy work than his music. 6ix9ine, the “King of New York” as he calls himself, plead not guilty on racketeering and firearms charges earlier this week.  While stories of 6ix9ine continue making national headlines from Fox News to TMZ, top Spanish news outlets have just begun consistently covering the rapper’s legal battles, despite previous stories capitalizing on his Latinidad and often overlooking his sexual misconduct case.

If found guilty 6ix9ine faces a minimum of 32 years in prison. His arrest comes just after his sentencing on October 26 for his sexual misconduct case, when the rapper used a 13-year-old girl in a sexual performance. 6ix9ine was sentenced to four years probation and 1,000 hours of community service but was not required to register as a sex offender.

In the last few weeks, Univision and Telemundo have made an effort to cover 6ix9ine’s recent New York arrest and trial. Even though they did not consistently provide online coverage of 6ix9ine’s child sex case, despite the 3 years it took to settle in court. With the rise of the #MeToo movement in 2017 and popularity of stories regarding sexual abuse, it is ironic his child sex case was not at the forefront of coverage. Latino Rebels reached out to Univision and Telemundo with a request for an interview about their coverage on 6ix9ine, but neither has responded.

Prior to 6ix9ine’s recent arrest, Telemundo published one article and video report on their website about 6ix9ine; neither mentioning his recent child sex case. One story was about Mexico trip to his mom’s old elementary school, where he handed out cash to children and another about the time he was a victim of an assault and robbery in New York.

Univision, named the top Spanish news program in the 2017-2018 broadcast year, published a few more stories on the rapper and in the past mentioned the child sex case as an afterthought in an article about the time he was robbed. Their overall focus seemed to be on stories not at the forefront of American news outlets, such as 6ix9ine purchasing an inhaler, his extensive collection of cars and his mother’s birthday, when he gave her a cake surrounded by thousands of dollars.

Of the stories covered by Spanish networks before the recent arrest were his trips to Mexico and the Dominican Republic, where he posted on social media giving money to residents. “Everyone knows me for giving back in my community but as a Latino, I felt the need to help my people. I’m not Dominican, but we are all one.”  His message to his fans on Instagram refers to the connectedness and unity Latinos have regardless of country or socioeconomic status.

Words can’t explain the anger I have right now… I grew up not having shit in Brooklyn… Everyone knows me for giving back in my community BUT as a Latino I feel the need to help my people. I’m not Dominican… But we are ALL ONE ✊? ????????????Life is what you make it. If I made it I’ll try all in my power for all us to make it… at least have hope. ?? God bless us. @william_asher ?

I went to my mom school where she attended 45 years ago AND IT FELT AMAZING GIVING HOPE TO THESE KIDS. Even if they didn’t really care for what I said it felt so gooooooood seeing them happy and knowing that there’s always a way out and a way through! TE AMOOOOOO MEXICOOOOO ??????❗️❗️❗️

“What people don’t understand as much as people downplay and demonize Tekashi 6ix9ine’s character, who really does more for the community than Tekashi 6ix9ine,” 6ix9ine said in an interview with The Breakfast Club radio.

The problem is Latinos giving to other Latinos did not begin with 6ix9ine. Other Latino artists such as Shakira, Juanes, Marc Anthony, Gloria Estefan, and Pitbull have all participated or led unique initiatives to give back to underserved communities. While their contributions are not questioned by fans or publicized like 6ix9ine’s, perhaps it’s because they are not overshadowed by past controversies.

6ix9ine’s philanthropy work appeals to the pathos of Latinos, specifically those living in Latin American countries. Yet with these stories among only a handful of those available from Spanish markets online, audiences may have a different and skewed understanding of who 6ix9ine is.

Univision and Telemundo, use a tabloid style of reporting, with quick, short-form stories, on entertainment and celebrities. Both websites also must provide coverage of daytime shows, sports, cooking, politics, crime, immigration and other programs, making them a one-stop shop for Latinos internationally. Considering they are not just news broadcasts, but TV channels, they are forced to cast a much wider net for Spanish audiences.

In 2002, a report comparing local news in English and Spanish, Pew Research Center summarized Spanish language networks, “as more interested in homelands far away, if not the world in general.” While their scope being international, Spanish networks allow less opportunity for coverage of American culture even when it comes to well-known rappers like 6ix9ine.

6ix9ine makes himself a difficult task for any news outlet, considering his actions often conflict with his persona. Initially, 6ix9ine’s story of growing up poor in Brooklyn, trying to take care of his mother, after his father was shot, is an admirable story. His ability to rise from poverty as a Latino is one easy to cheer on. In contrast, Univision has referred to 6ix9ine as the ‘bad boy’ of rap, referring to his machismo persona, hyper-masculine, aggressive and deviant characteristics much like other non-white rappers. 6ix9ine defends using the N-word and has lyrics such as, “I’m on some rob a n*gga shit, take a n*gga b*tch, do the dash in the whip, count the cash in the whip.”

The scarce coverage from Spanish markets could also stem from 6ix9ine’s lack of music in Spanish, his association with other ‘Soundcloud’ rappers and use of a pen name, rather than his legal name Daniel Rodriguez. He is often alongside artists like Lil Pump and Lil Xan– characterized by mumble rap, drug use, face tattoos and criminal pasts. Lil Xan and Lil Pump hardly receive attention from Spanish media, but also have an ambiguous appearance. Yet 6ix9ine is the only one with a newly released Spanish song, making him newsworthy to Spanish audiences internationally.

With Mexican regional, tropical and pop dominating the Latin Billboard charts, the release of “BEBE,” featuring Puerto Rican rapper Anuel AA, is 6ix9ine’s first and only song to appear on the Hot Latin Songs chart. “BEBE,” debuted at No.1, breaking a record previously set by Shakira. 6ix9ine’s position in the music industry allows him to navigate through the male-dominated rap arena, Spanish or English, despite incarceration. Since his arrest his merchandise and debut album DUMMY BOY released on all major music platforms this week.

Without 6ix9ine’s release of “BEBE” his music puts him in a gray area for coverage surrounding his music. Artists falling in the category of reggaeton are often covered and used as promotion for Univision’s Latin Grammys, where music with hip-hop influences fit in the category of best urban album and song. Urban music itself is fairly new coming from the evolution of reggaeton in the 1990s along with hip-hop, Caribbean and pop influences. Mainstream hip-hop/rap does not have a category, reflecting the Latin Billboard music charts and sporadic coverage in Spanish news media.

6ix9ine’s value to a Spanish news outlet remains dependent on his relevance to their Latino audience and with his single “BEBE,” he is more well known than ever before. Before his breakout in Spanish music and most recent arrest, 6ix9ine was often portrayed as a character whose behavior and ironies made for fast entertaining stories.

This previous narrative in Spanish news media continued to benefit 6ix9ine, instead of providing audiences a full understanding of his run-ins with the law. It gave an incomplete understanding of the rapper. Now Spanish networks are in the game of catch-up with American news outlets, as they continue to update their audience with his current racketeering and firearms charges. His trial is set for September 2019 and with the release of his new album, the story of 6ix9ine is not over. For Univision and Telemundo, this is only the beginning.

Gabrielle Rivas is a journalist. She is currently pursuing a BA at Fresno Pacific University. Gabrielle tweets @gabr_5.