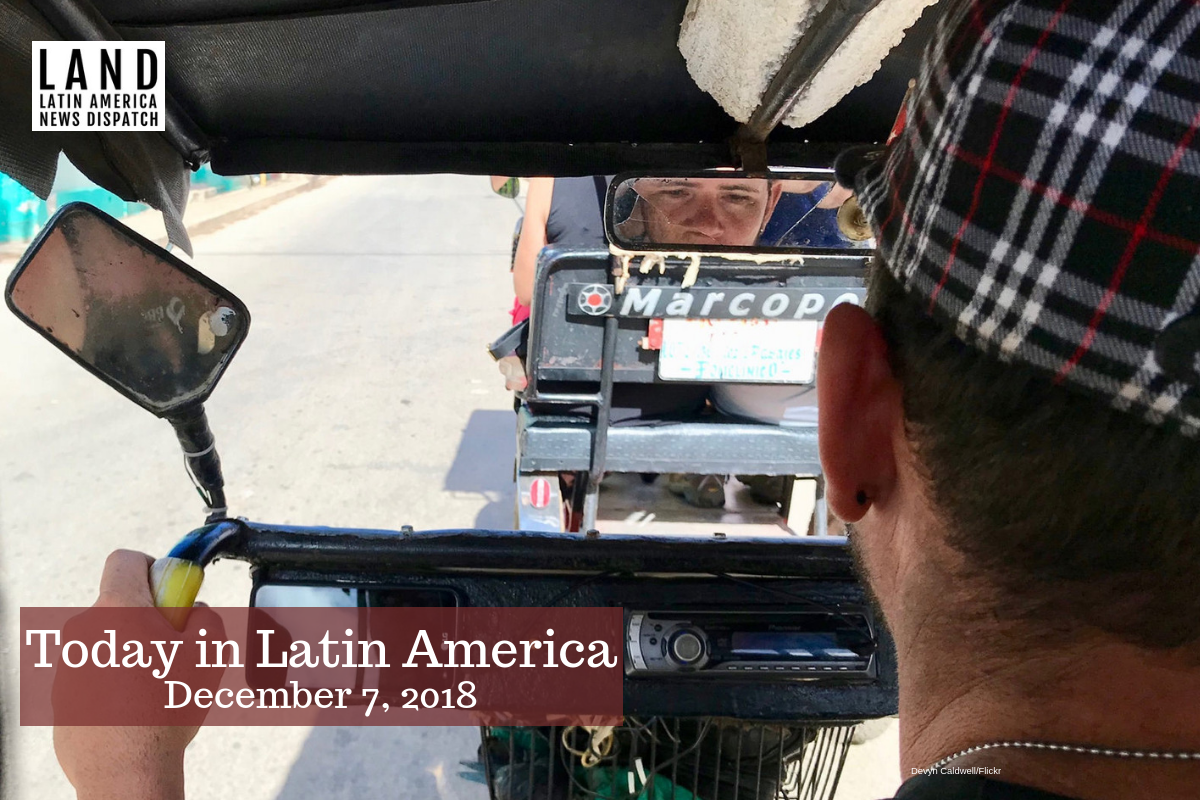 CUBA: Cubans gained 3G internet access on their mobile phones for the first time yesterday, through a program offered through the state-run telecommunications company. The move aligns with President Miguel Díaz-Canel’s goal of expanding connectivity throughout the island, which has one of the world’s lowest rates of internet use. On Tuesday, Díaz-Canel tweeted that increased access would create a “permanent link with the people, guaranteeing their participation in revolutionary tasks and decision-making.”

Before this week, Cubans were able to connect to the internet at a limited number of government-sponsored Wi-Fi spots. Government officials and foreign businesspeople could access the 3G network anywhere, although the service was not reliable. The full 3G access will begin to be rolled out gradually starting on Saturday in order to avoid congestion with the 5.3 million Cubans who own cellphones—half the island’s population.

UNITED STATES: Congress passed a spending bill yesterday that will postpone a possible government shutdown over immigration until Dec. 21. President Trump has said he will sign the measure, but insisted that lawmakers ultimately provide $5 billion dollars for a border wall. House Democratic leader Nancy Pelosi called for separate debates on the wall and the renewal of the Deferred Action for Childhood Arrivals program, which allows immigrants brought to the country as children to obtain legal status. The spending bill came as the Associated Press reported that the Trump administration has separated 81 children from their families since the a federal judge ordered an end to its zero-tolerance policy in June.

MEXICO: President Andrés Manuel López Obrador said yesterday his administration plans to increase wages for federal government employees earning less than 20,000 pesos per month. AMLO discussed the 2019 budget at a press conference, committing to present his administration’s economic package by Dec. 15th. The wage hike proposal comes as opposition members in the Senate ask the Supreme Court to suspend a new cap on public salaries, which would make it illegal for higher-ranking public officials to earn more than 108,000 pesos per month.

DOMINICAN REPUBLIC: Wednesday’s explosion at a plastics company has killed five people and injured more than 60, including several children who attend a neighboring school, authorities said yesterday. One person was still missing as of yesterday evening. Manuel Díez Cabral, the owner of Polyplas, said that most of his staff had been already been evacuated after the discovery of an “’uncontrollable” gas leak, and offered “sincere condolences to the families of the victims.”

HONDURAS: Hooded youths claiming to be students from the National Autonomous University of Honduras threw Molotov cocktails at three buses in Tegucigalpa yesterday, setting them on fire. The perpetrators cited rising public transportation fares as the motive for their attack, and said that they will continue with similar actions until fares are lowered.

ECUADOR: President Lenín Moreno announced in a radio interview yesterday that Great Britain had provided satisfactory guarantees that WikiLeaks founder Julian Assange will not be extradited to face the death penalty abroad. Assange has been seeking asylum in the Ecuadorian embassy in London since 2012. Moreno, who has been discussing the issue with the British government, said that while “the road is clear for Mr. Assange to take the decision to leave,” he is still not prepared to force Assange out.

VENEZUELA: President Nicolás Maduro announced yesterday that Russia has agreed to invest more than $5 billion in Venezuelan oil production and $1 billion in mining, principally for gold. Maduro had met with President Vladimir Putin earlier this week outside Moscow, where the two also discussed investments in satellite technology and further weapons deals. Venezuela already owes Russia, one of its few remaining creditors, an estimated $6 billion in overdue loans.

BRAZIL: In a meeting with foreign correspondents, President Michel Temer said yesterday that he is not concerned about facing possible corruption charges when he leaves office on Jan. 1. Temer’s partial immunity as president has thus far helped him avoid criminal prosecution. While the attorney general has charged him in two bribery and obstruction of justice cases as part of the “Car Wash” investigation, Temer allies in the lower Chamber of Deputies voted against putting him on trial both times.