Memory causes a knot in your stomach. It recalls a moment much too different from the present. It’s proof of our lived experiences, whether shared through familial ties or detached in the name of individuality. It manifests itself through sight, sound, touch, taste, and smell; those are the conduits to sweep you off your feet and make you travel in time, to a place that’s a testament to your legacy—renders you a witness, vulnerable, human.

In Alfonso Cuarón’s Roma, memory works in a similar fashion. In an interview with Variety, the director says this about memory: “Borges talks about how memory is an opaque, shattered mirror, but I see it more as a crack in the wall. The crack is whatever pain happened in the past. We tend to put several coats of paint over it, trying to cover that crack. But it’s still there.” Cuarón doesn’t conceal or patch up that crack: he exposes, peers, and delves deep into what lies behind it.

Based on Cuarón’s own life between the years of 1970 and 1971, the film follows a middle-class family in the Roma neighborhood of Mexico City. We don’t see this tale through the eyes of the family matriarch Sofía (a commanding Marina de Tavira), or the absent patriarch Dr. Antonio (Fernando Grediaga), or any of the four rowdy children. We see the story through a prism of the present from Cuarón’s understanding of the past, and most crucially, centering on the family’s maid Cleo (played by a soul-arresting Yalitza Aparicio). Shot in 65mm and stunning black-and-white (in deep-focus and mostly wide angle shots), every frame is carefully composed, every shot a perfect photograph registering the mood, a relic coming back to life before our eyes.

Our young protagonist Cleo is an indigenous woman who forms a sisterhood with Adela (Nancy García García), the family’s cook. Their camaraderie is palpable; they gossip in their native Mixtec language, exchange news from their hometown, tease one another about boys, have a nightly exercise routine to burn off excess calories from all the good greasy food of the day. Their relationship is honest and playful. Two partners in crime. But this is the only relationship where Cleo is seen as an equal.

Cleo has left her village and everything she holds dear behind to tend the needs of a new family, one she’s a part of, but always at the periphery. Cleo wakes the children up in the morning and puts them to bed at night, she gets them ready for school and watches over them when they return. She cleans the house and does the laundry. At night, she crouches next to the family as they gather in the living room to watch TV. A boy puts his arm around her. A tender touch. She’s one of them. But seconds later, Sofia tells her to make tea for Doctor Antonio, lest we forget she’s there to serve. She’s an employee first, Cleo second.

One of the film’s strengths is that it doesn’t berate the viewer with didactic tropes of the rich versus the poor. It doesn’t antagonize or victimize the characters we see on screen. Make no mistake, however, Roma is a film about the caste system and how class works in Mexico. 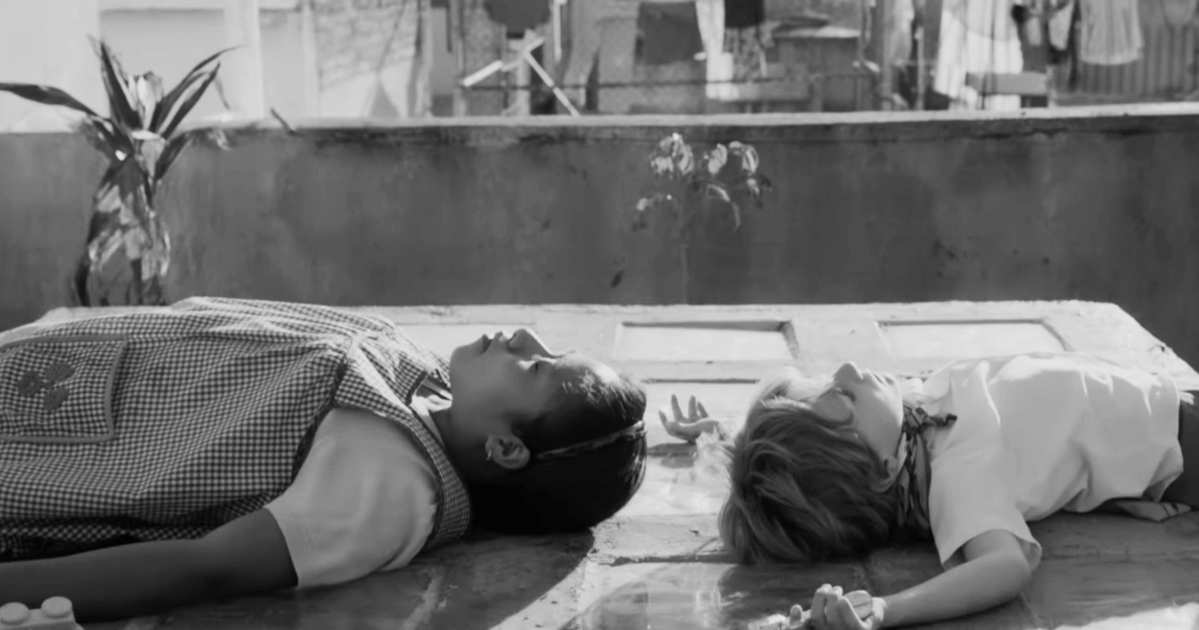 In one striking scene, Sofia takes Cleo to the hospital. The doctor keeps a detached yet professional approach with Cleo, someone who would otherwise lack access to adequate healthcare if it wasn’t for the señora. Shy and embarrassed, our protagonist struggles to answer routine questions about her sex life. Her timidity reflects the taboo of sex in Mexico, particularly for a girl from a small village discovering her sexuality and having to vocalize it. Would a middle class, white Mexican woman be so apprehensive about disclosing her sexual life with a doctor?

One key vignette, which happens after the father is completely out of the picture, is when the family, including Cleo, go to an hacienda for New Year’s. Reminiscent of Ingmar Bergman’s Fanny and Alexander—another film that centers on the director’s childhood—this chapter captures the lavish lifestyle of the middle class. We see an abundance of food, a surplus of alcohol, gun shooting as a recreational activity, and in perhaps the most surreal part of the film, servants arduously working to put out a fire while our well-to-do characters just watch with a drink in hand.

Cuarón juxtaposes the extravagant against the more modest. Cleo is convinced by the hacienda’s housekeeper to join her in the party the employees have organized for themselves, not in the house but down in the servants’ quarters. She takes a walk on the hacienda’s fields and voices how the smell and sounds remind her of home. The camera slowly pans from her joyous face, visibly in a trance, to the landscape. Cleo, the girl who remembers her roots.

Just as the director tackles class difference with subtlety, he handles political issues with equal finesse.

To understand that, we need to look at the historical backdrop within which the film takes place. Ahead of the summer Olympics in 1968, a physical altercation caused el grupo de granaderos (riot police) to use brutal force to end a fight between high school students. The show of violence had a silver lining; it pushed students to organize and speak out against the government’s ongoing repression. The movimiento estudiantil, or Student Movement, was born.

Demonstrators continued rallies demanding, among others things, the release of jailed students and the disbanding of the violent police units. Seeing how the rallies were gaining support, President Gustavo Díaz Ordaz ordered the military to occupy the National Autonomous University of Mexico (UNAM) campus to discourage sympathizers. The students persisted until October 2 of the same year, when the military shot indiscriminately at a group congregated in the Plaza de las Tres Culturas in Tlatelolco. The death toll is still unknown, but it’s believed to have been in the thousands. 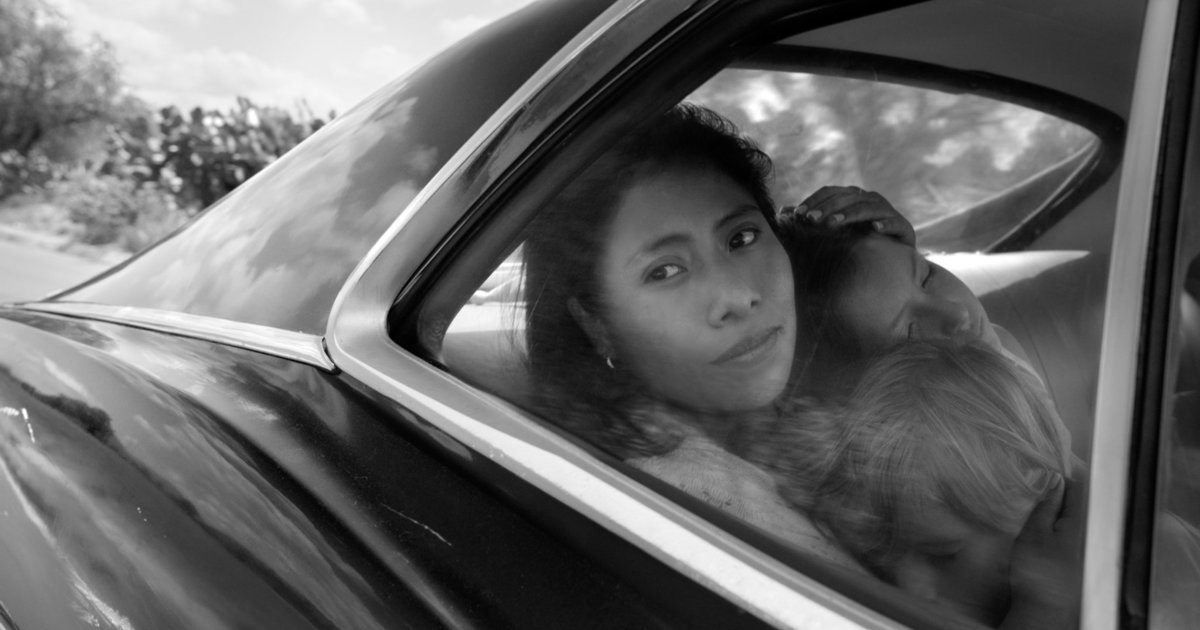 Roma alludes to one of the bloodiest events in Mexico. On June 10, 1971, the Corpus Christi Massacre, or el halconazo, rattled the country. A paramilitary group—composed of mainly disadvantaged youth—shot student demonstrators. The event shared DNA with Tlatelolco in ‘68, but now the government could wash its hands saying it had nothing to do with it, even when evidence pointed at them.

While Cuarón captures the political turmoil, he also makes it a point to observe the loss of innocence.

Cleo meets a seemingly harmless Fermín (Jorge Antonio Guerrero), a handsome martial arts expert. When he talks sweet to Cleo, we witness her falling in love. But after Fermín learns that she is pregnant, he withdraws. In one heartbreaking scene, Cuarón’s camera zooms in on Cleo’s face. Aparicio’s work is nothing short of stellar. She goes from confusion and disappointment to betrayal and hurt all in a single shot. She realizes Fermín will not return.

Roma is not a plot-driven film, nor does it fit the standards of a conventional drama with a major conflict at its core. Instead, the film is comprised of a series of episodes that accumulate until creating an ultimate burst in the climactic sequence when Cleo is in labor. For Cuarón, known as a master of long and rigorous sequences, this is one of his most compelling to date, and one of the year’s finest.

At a micro level, Roma tells the story of a family confronted with betrayal, loss, and abandonment. At a macro level, the film records the ever-changing political and socio-economic landscape of a country that’s hurting and hungry for change.

And Cuarón parallels the struggle of Mexico with that of Cleo. There are thousands of woman like her in Mexico, whose stories will never be told. In many ways, Roma honors the legacy of those women and what they do for Mexico. Roma is Mexico.

Roma is in select theaters now and available to stream on Netflix on December 14th.

One response to “Film Review: Exploring Memory, Family, and Political Turmoil, ROMA Is Alfonso Cuarón at His Best”