In Tijuana, Bringing a ‘Sense of Normalcy’ to Migrant Children, One Meal at a Time (PHOTO ESSAY) 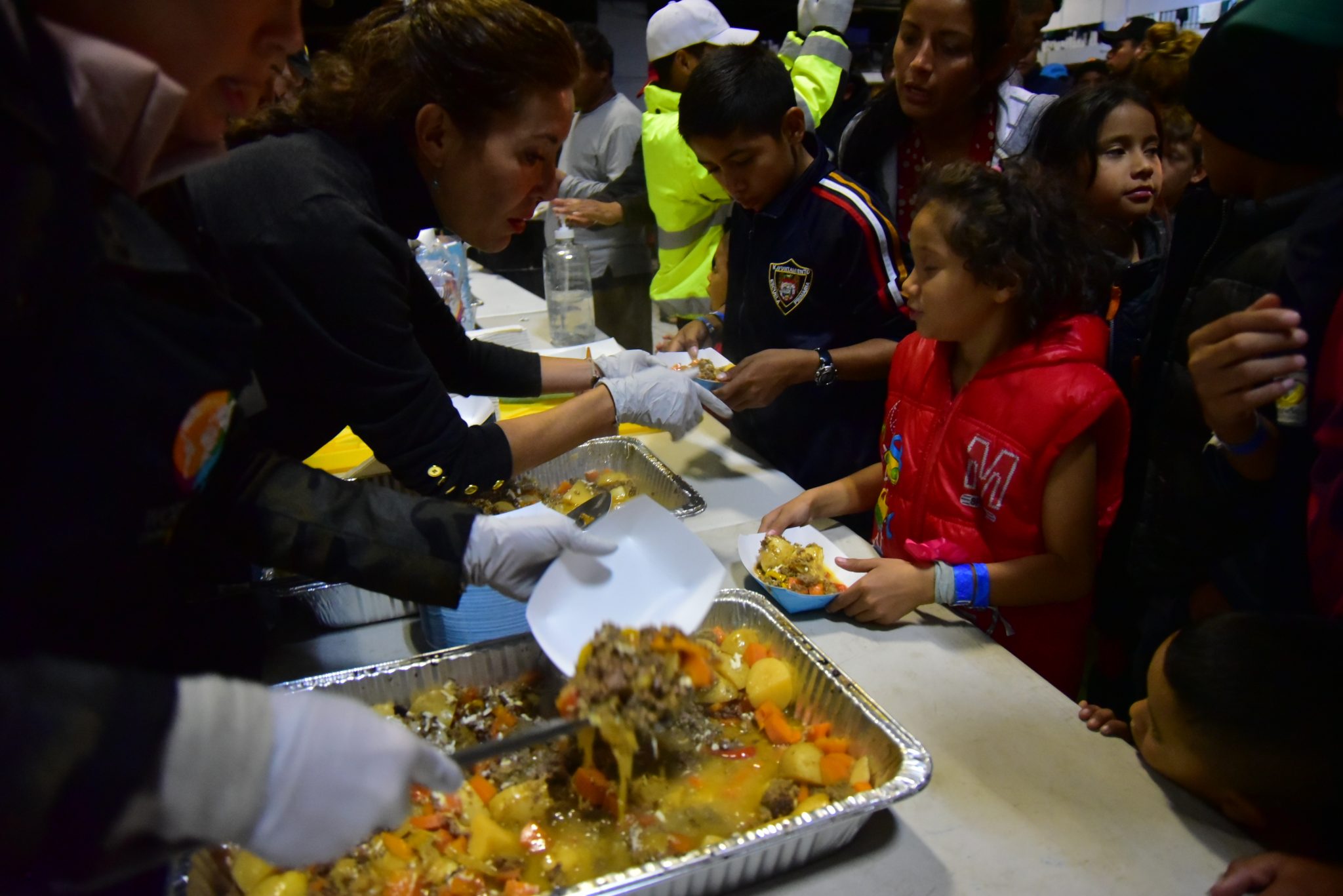 TIJUANA —  Chef José Andrés’ World Central Kitchen is serving an average of 3,200 meals a day to migrants, mostly women and children, seeking U.S. asylum at the El Barretal center, where members of the caravan were moved to after heavy rain and windy conditions affected their previous tent city. 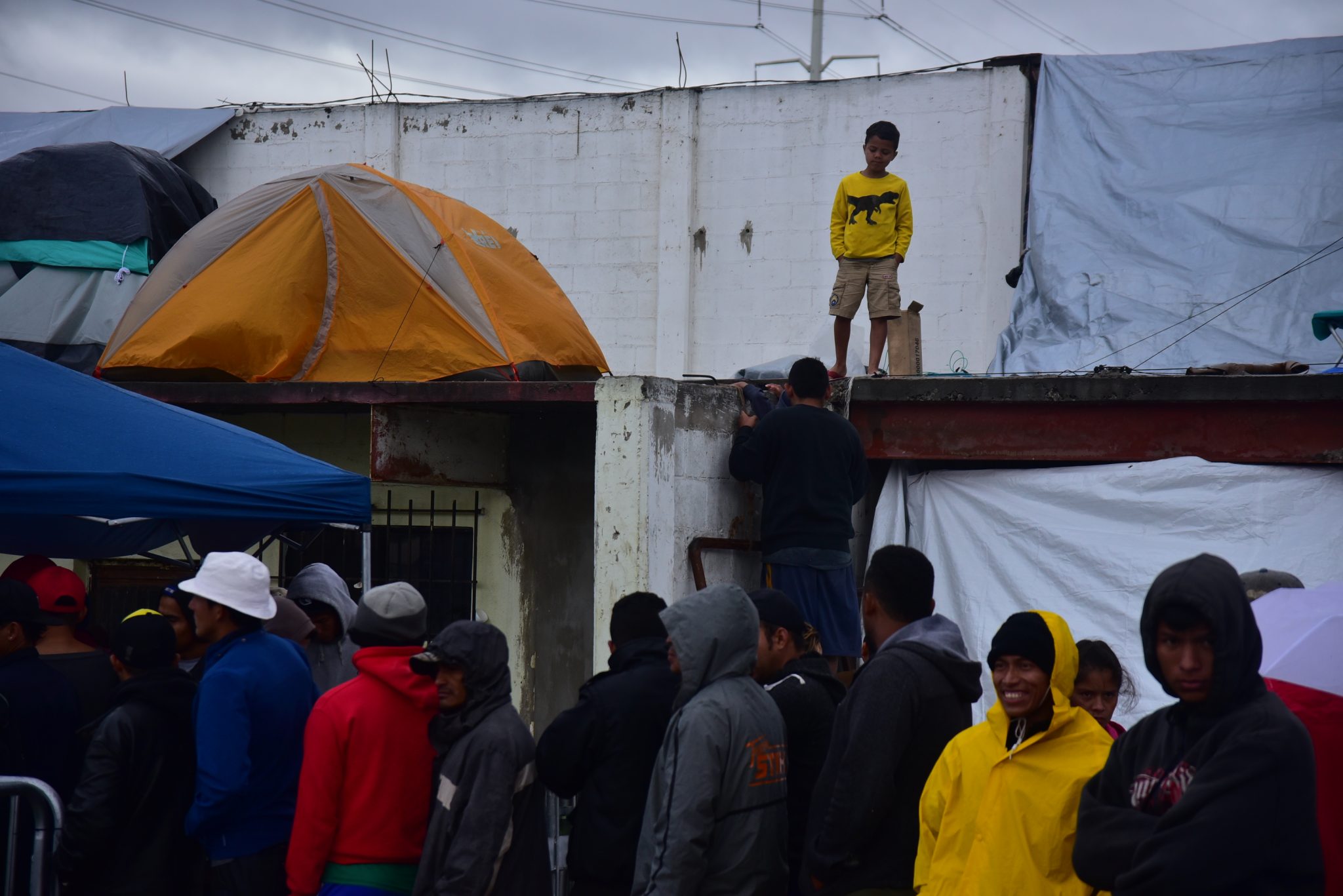 Weariness and despair are beginning to settle with the unsettled. Families are stressed out and tired, not only from their journey from Central America but because they are now living in limbo, without any real effort from the U.S. government to provide them with information or the means to apply for asylum. 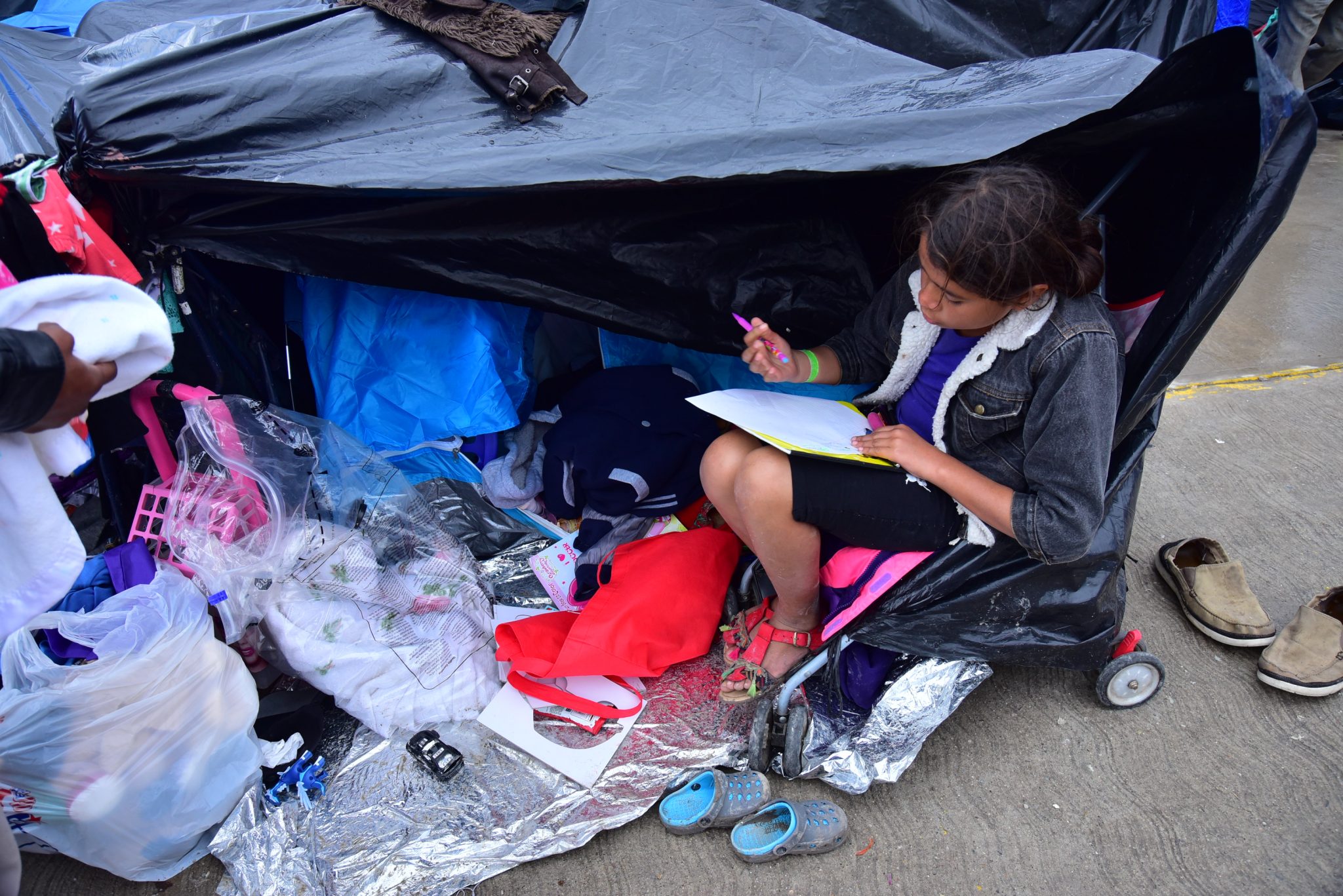 Many of the asylum seekers have fled violence and threats against their lives. Such is the case of Marla, a 22-year-old Honduras national and mother of two. 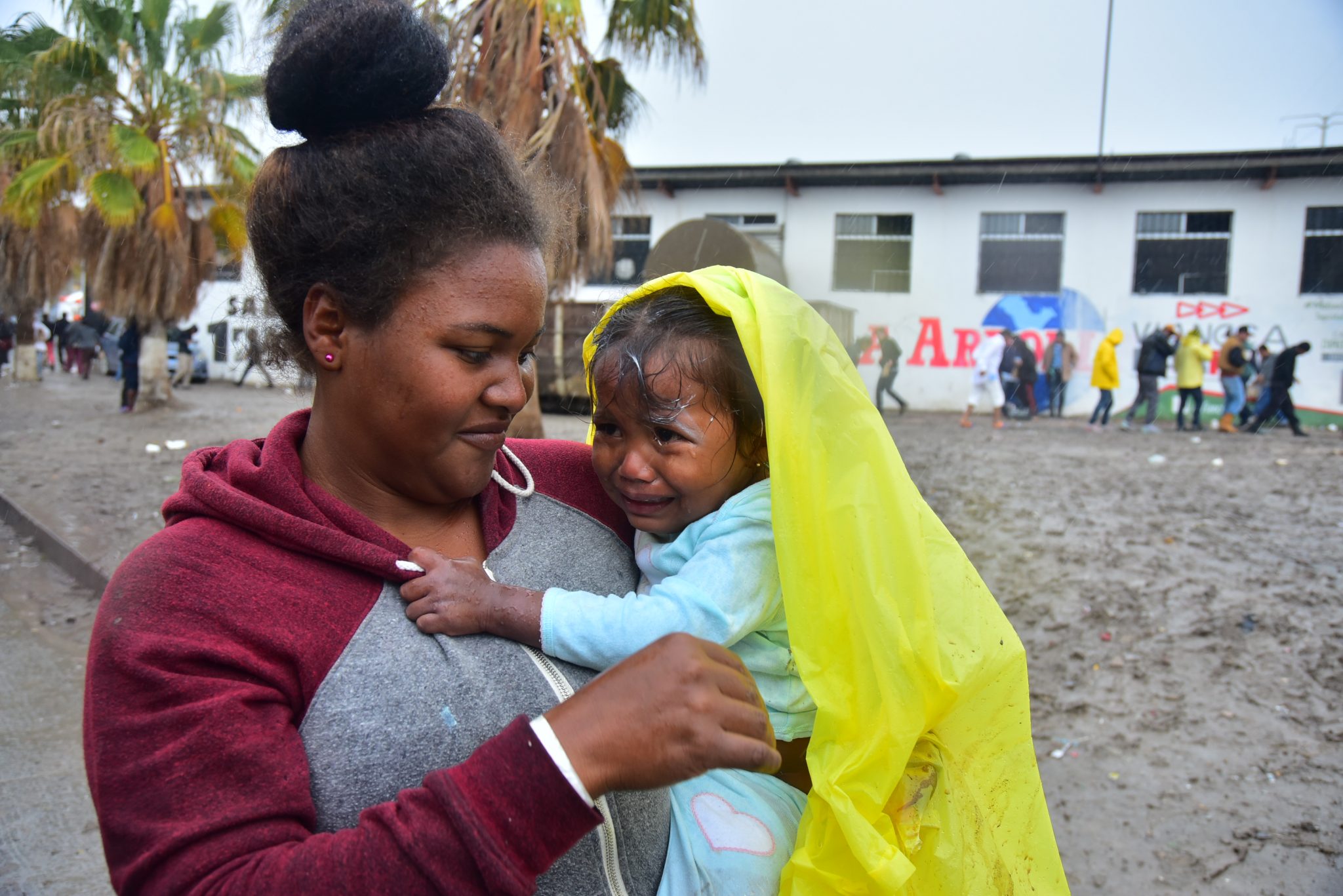 Marla, 22, holds her daughter Marci, who is crying after Marla slipped and fell in the mud with her baby girl. (Photo by Francisco Lozano/Latino Rebels)

“We don’t know what to do, they have us here without any sign of hope for asylum. They [Mexican local authorities] take us in buses to job fairs but not to anywhere where we can apply for asylum in the U.S. Our children are tired and getting sick, and now the rain and cold wind, which we are not used to.”

Marla found herself wiping away the tears off her two-year-old daughter Marci after Marla fell in the slippery mud due to heavy rain in the area.

“Our children are getting sick,”  Marla added. 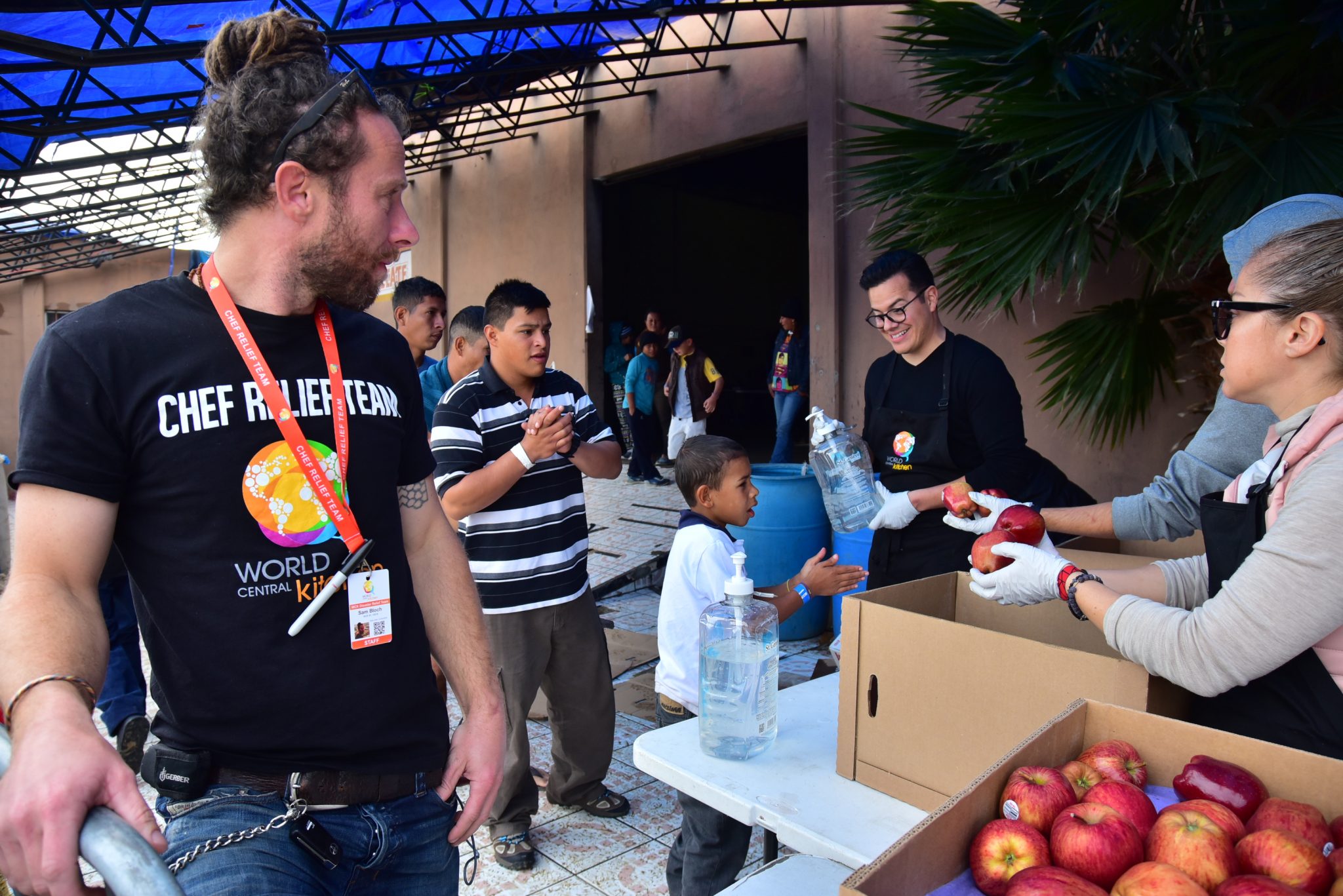 “We are bringing a sense of normalcy to these families,” World Central Kitchen’s Sam Bloch said when asked what their mission here was.

Bloch has been working tirelessly day in and day out.

“We have a Central Kitchen in a remote area in downtown Tijuana where all the meals are prepared by chefs and volunteers. The food is then brought to the shelter where we serve it three times a day,” he noted. 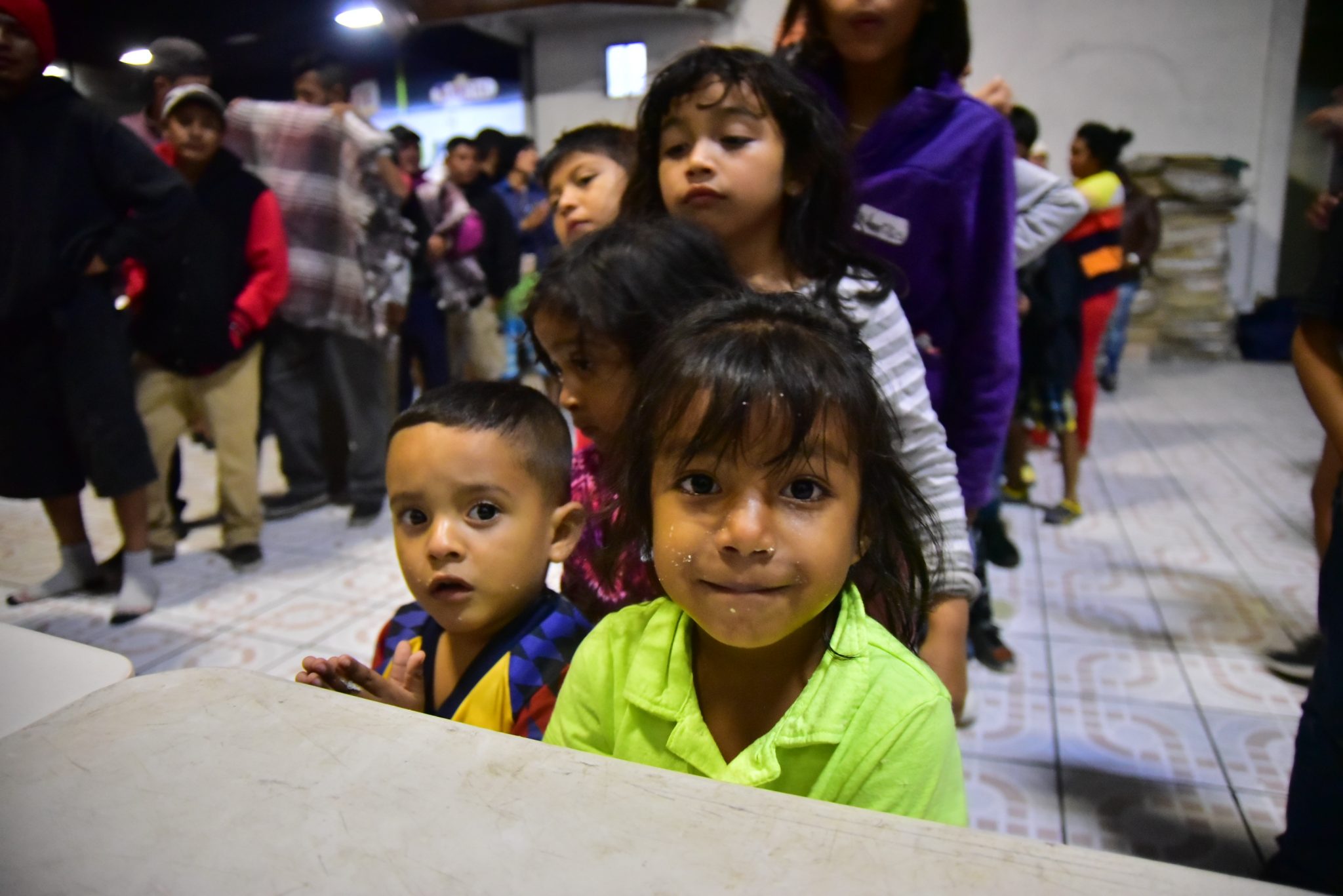 Small children are the first in line to be fed by Chef José Andrés’ organization World Center Kitchen at El Barretal. (Photo by Francisco Lozano/Latino Rebels)

Chef José Andrés, who has been nominated for the Nobel Peace Prize, has been trying to bring a “sense of normalcy” since the 2010 Haiti earthquake, and can be seen wherever disaster makes itself present, with some of the most recent relief efforts being done in Puerto Rico after the hurricane, during the California wildfires and now for Tijuana, Mexico. 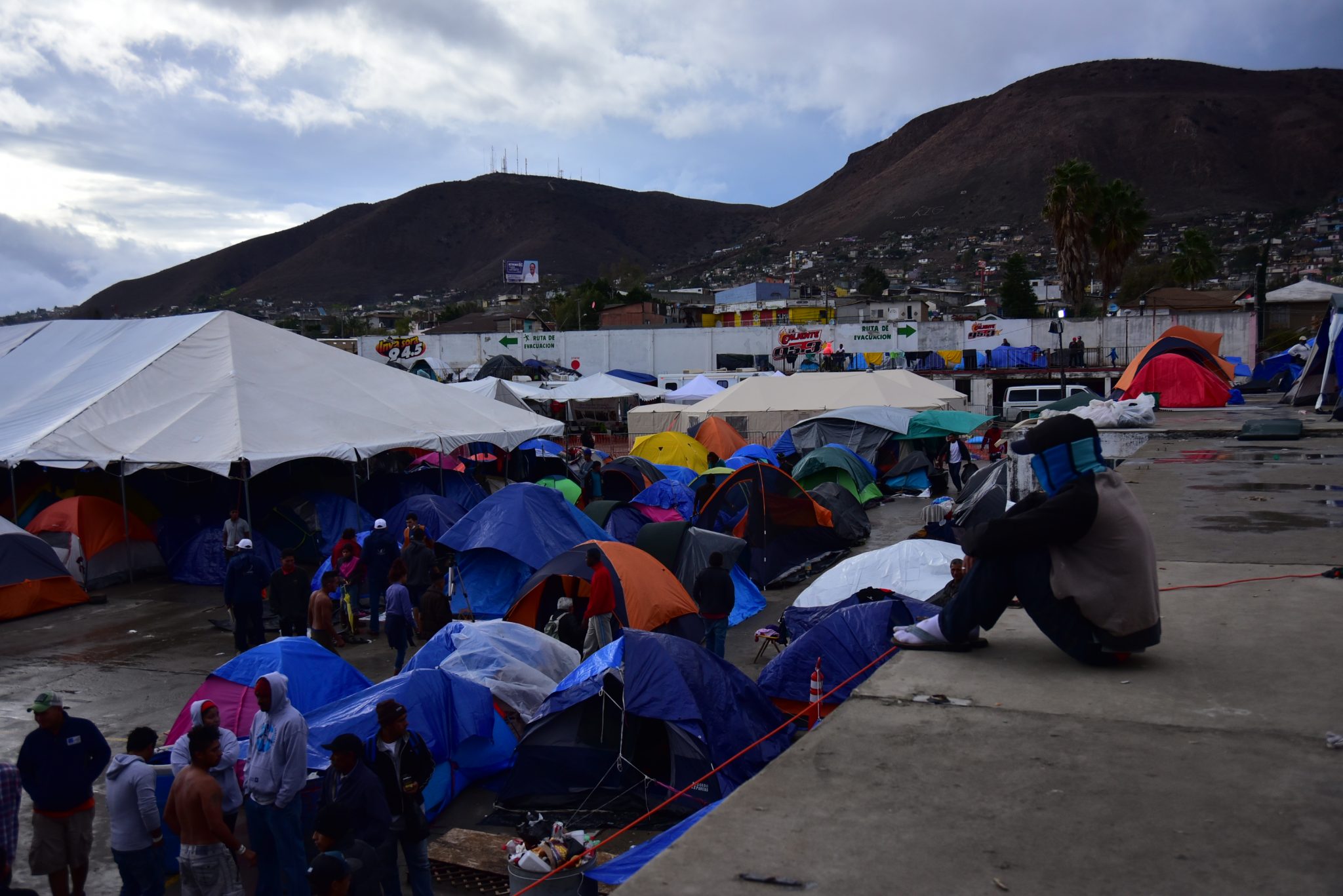 Since there isn’t enough room at El Barretal to hold the many tents, other migrants camp on the overhangs of the building. (Photo by Francisco Lozano/Latino Rebels)

When asked about the rhetoric by the U.S. administration that claims that caravan members are hardcore criminals, Bloch said, “They are humans.”

Fighting back tears, he told Latino Rebels whether the task at hand is overwhelming. 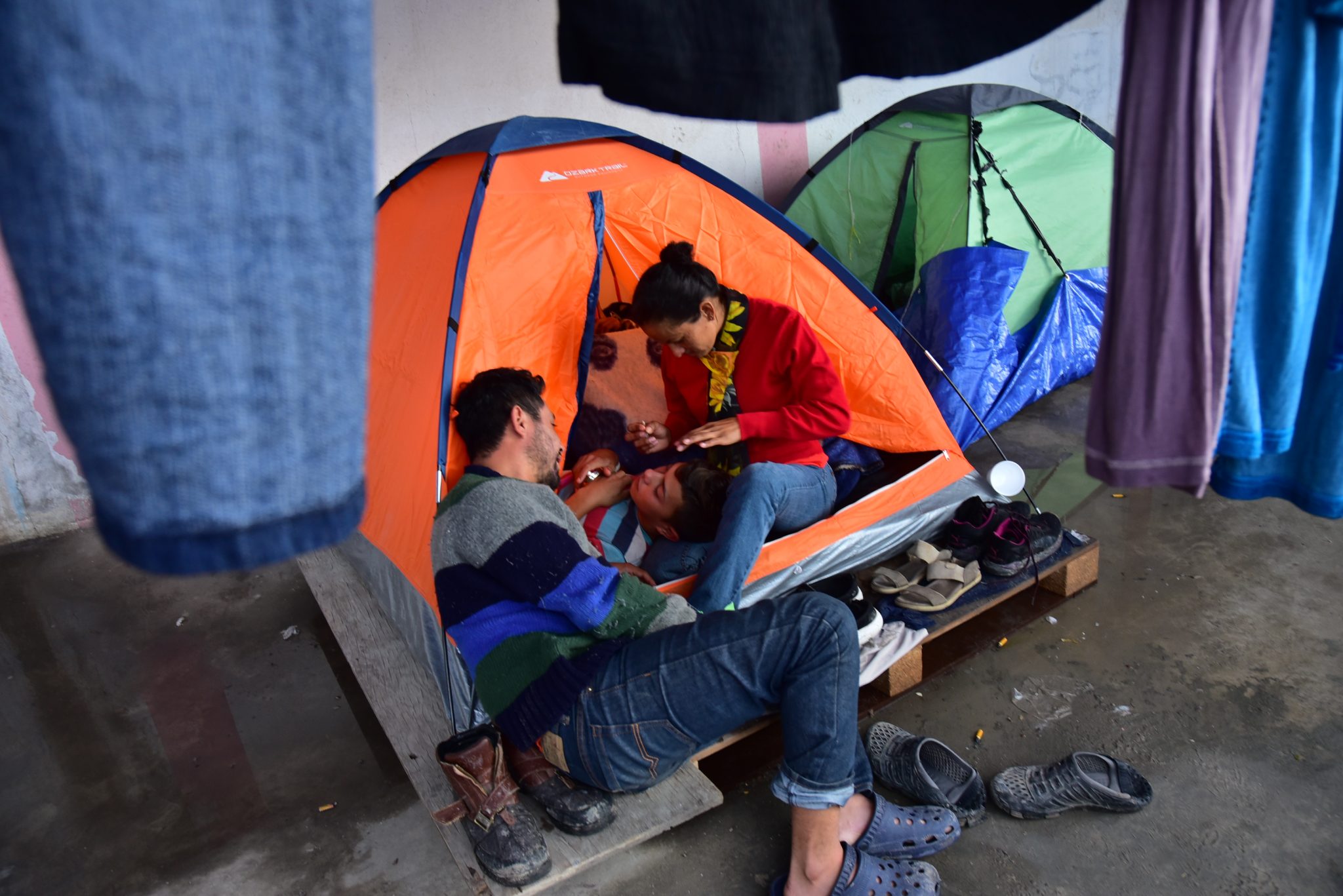 A family sits together in one of the tents at El Barretal. (Photo by Francisco Lozano/Latino Rebels)

In another part of the complex, young men kick a soccer ball around. Others dance to tropical tunes. 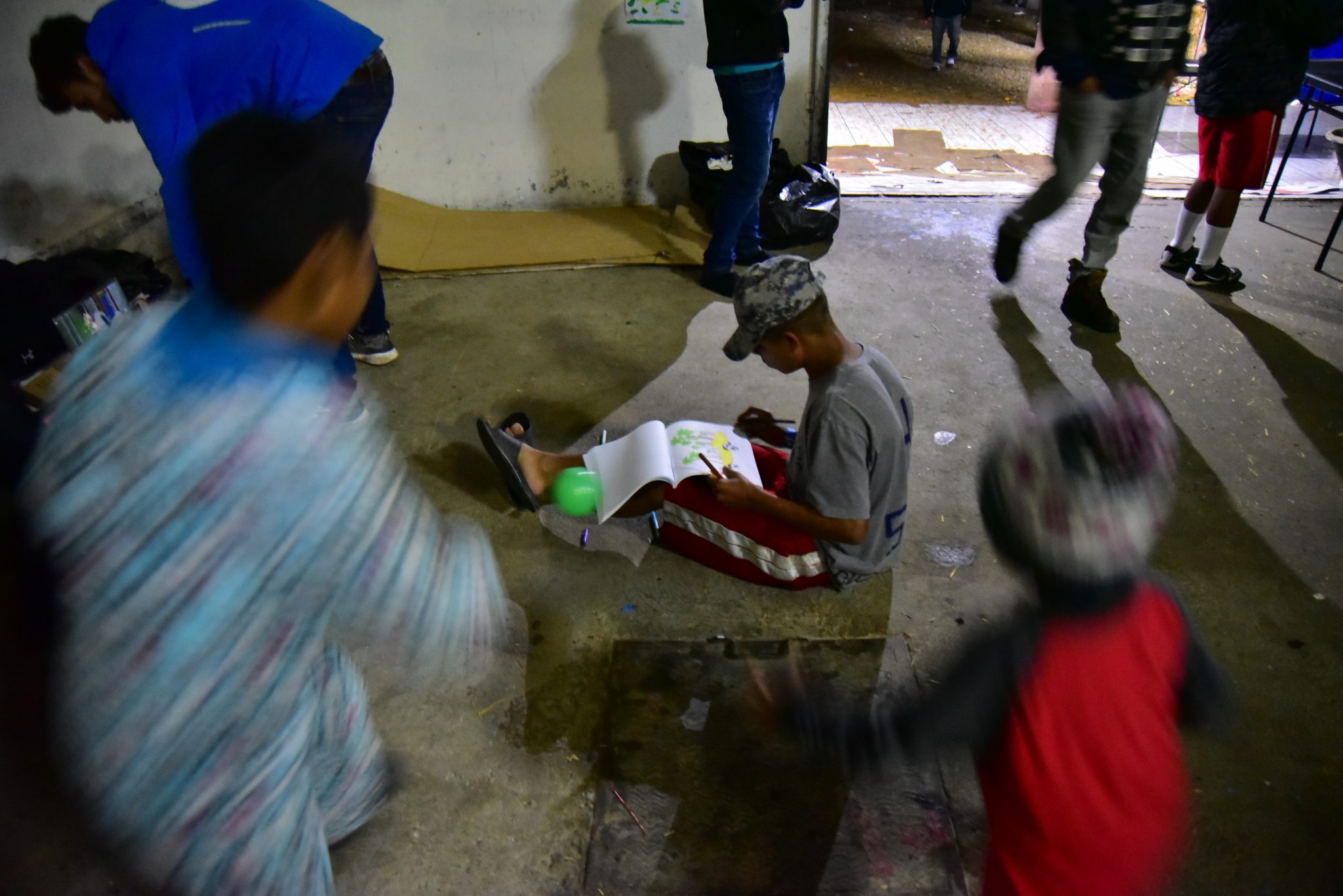 A young boy is trying to do some school work among the chaos and children playing around him. (Photo by Francisco Lozano/Latino Rebels)

Another group also tries to run a small business en route to the U.S. via the Caravan, such as is the case of 19-year-old Daniel Franca, a Honduran member of the caravan who has been giving a buzz to young men in need of a barber.

“I’ve been giving haircuts ever since we left Honduras, charging a little bit to those that can afford it, free of charge to those who can’t,” said Daniel as he was cheered on by a group of fellow Honduran youth. 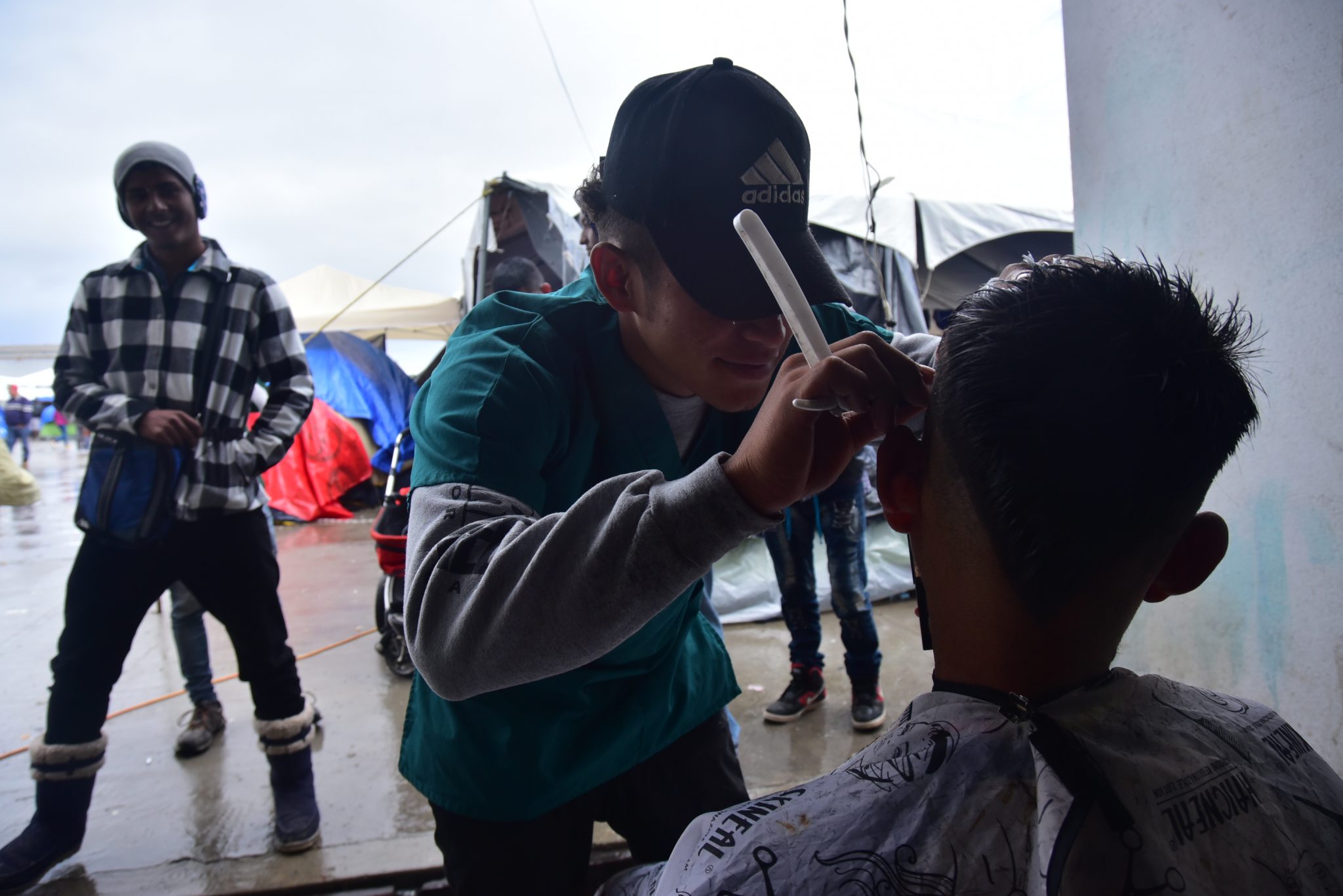 19-year-old Daniel Franca gives a teenager boy a buzz. He has been cutting hair for caravan members all the way from Honduras and has lost count of how many haircuts he has given. (Photo by Francisco Lozano/Latino Rebels)

As the families battle an immigration system, under heavy rain and cold winds, acts like Daniel’s are helping create a routine that imitates day-to-day life in a time of chaos for these families. 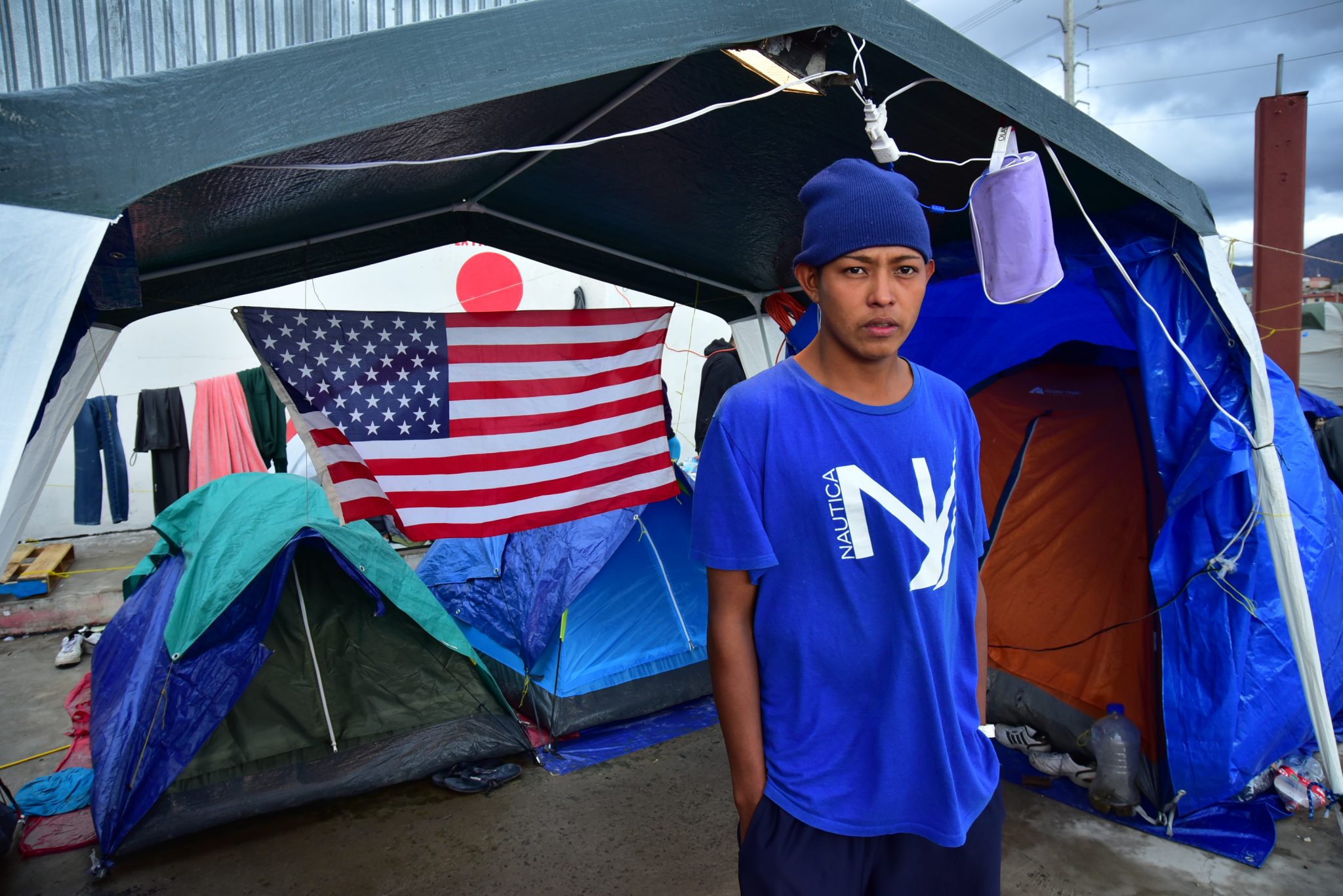 As for the meals of Chef José Andrés’ group, they also bring a sense of calmness, one plate of frijoles at a time.