The U.S./Mexico Border: How Often and Why Arizonans Cross Into Mexico

One of the advantages of living in Arizona is the ability to access Mexico through one of six main border ports of entry. How often and why Arizonans decide to cross into Mexico is often overshadowed by stories of Mexico being an unsafe and crime-ridden place. Yet the strength of the ties that bind Arizona and Mexico are as indisputable as it is estimated that there are over 24 million crossings that take place every year through Nogales, Douglas, San Luis, Sasabe, Lukeville or Naco ports of entry.

In this brief, we examine recent data from the Center for Latina/os and American Politics Research (CLAPR) at Arizona State University to better understand who and why Arizonans are crossing into Mexico. The poll surveyed 775 total respondents, from September 10-25, 2018 and was administered by Latino Decisions. The poll reveals important facts about the way Arizonans interact with Mexico and comes amid public debates over the importance of the border for the prosperity of the state and proposals to improve the efficiency of cross-border flows as in a recent feasibility study by the General Services Administration and Customs and Border Protection that concluded that “Douglas, Arizona, definitely needs two ports of entry at the Mexico border.” According to the poll’s findings, 30% of Arizonans have crossed the border into Mexico in the past 12 months. 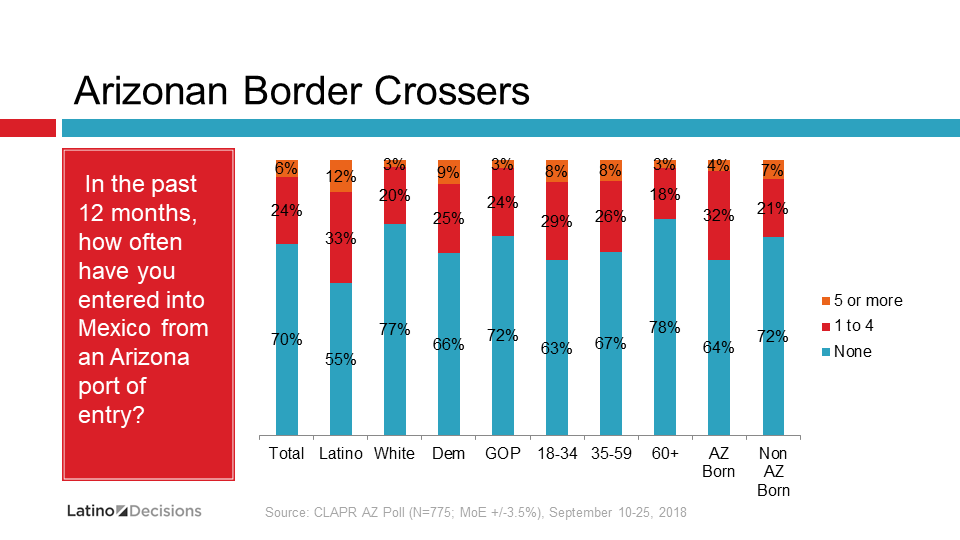 One unique aspect of the poll is that opens a window to explore the correlation between border crossing and age, nativity, gender, and ethnicity. Younger Arizonans(18-34) are more likely to have crossed the border in the past 12 months (37%),while those not born in the state are less prone to have crossed the border(28%) than citizens born in Arizona (36%). The poll also indicates that gender does not significantly affect the propensity to cross the border, but male informants recorded a higher crossing frequency (5 or more visits). Regarding race and ethnicity, Latinos/as (45%) are more likely to cross than their White counterparts (23%). We also find that Democrats (34%) are six percentage points more likely to cross relative to Republicans (27%).

We now turn to the reasons Arizonans cross into Mexico and find some surprising results. Most crossers visited Mexico more than once and most indicated vacation as “the primary reason to cross” (36%), followed by visitation to family and friends (31%), shopping (21%), dentist visit (16%) and medical care(14%). These numbers are consistent with findings of prior studies conducted in the state. Among Latino/as the main reasons for crossing the border are to visit family and friends (53%) and vacations (28%). For white Arizonans, the most likely reason for crossing is for vacationing (49%) but they are also utilizing medical and dental care similar to their Latino counterparts. When examining differences by age cohorts, we find that millennial Arizonans are more likely to cross over for medical care and to visit a dentist compared to all other age cohorts. The most unexpected finding is between Democrats and Republicans, where we find that Republicans are more likely to shop in Mexico, and utilize medical and dental care at higher rates than Arizonans who describe themselves as Democrat. 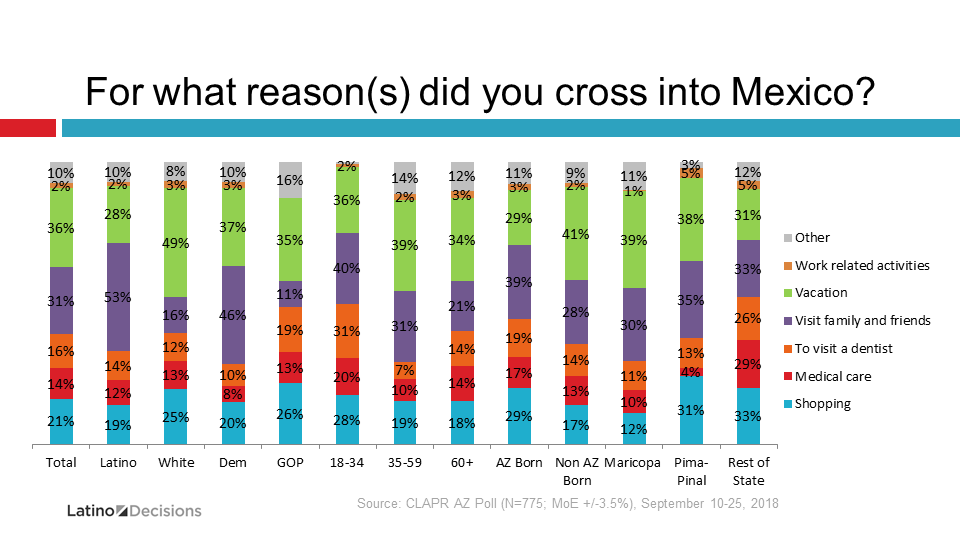 The results from this survey show the range and strength of inter-connections that Arizonans share with Mexico. Arizona’s cross-border links support complex business enterprises, secure access to affordable health care, and nurture inter-personal and family ties, among many other benefits. Disregarding these connections puts important resources and opportunities available across the border at risk, and will impact the lives of many Arizonans that have a human connection with Mexico. As President Trump, Canadian Prime Minister Justin Trudeau and former Mexican President Enrique Peña Nieto signed the new U.S. Mexico Canada Agreement (or USMCA), it is important for us to better understand and contextualize who and why Arizonans decide to cross. This research highlights the strong ties between Arizona and Mexico that emanate from the most personal level of interaction and show and how citizens on both sides of the border can benefit from commerce and the demand for services.

Poll Methodology: On behalf of CLAPR,Latino Decisions interviewed a total of 775 adults (610 registered voters)between September 10 and September 25, 2018. Interviews were conducted in English or Spanish, according to the respondent’s choice. Surveys were completed using a blended sample that included live telephone interviews on landlines and cell phones, and online surveys. The survey carries a margin of error of +/- 3.5 percentage points.

About CLAPR: The mission of CLAPR is to foster and support thoughtful, objective, and innovative research on the political and policy circumstances of the nation’s Latina/o-Hispanic population, thereby creating a fuller, deeper understanding of politics and governance in the United States. This mission entails facilitating and disseminating research that emphasizes, but is not limited to, empirical and normative theoretical perspectives, historical context, institutional dimensions, and public policy issues which are especially germane to the Latina/o-Hispanic population while also having broad significance for American society and politics.