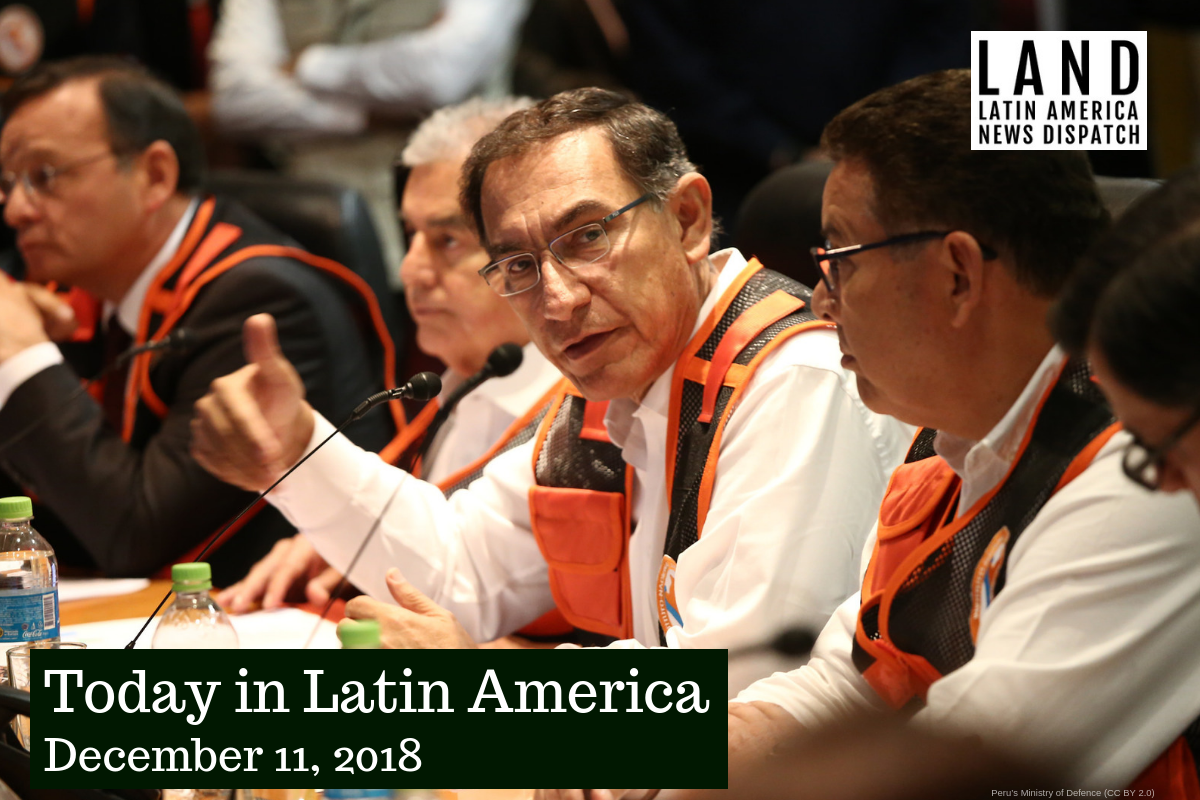 PERU: Peruvian voters approved three out of four anti-corruption measures in a referendum vote Sunday. The measures prohibit legislators from running for immediate re-election, create stricter campaign-financing policies and reform the council that selects judges. Peru’s former living presidents and four ex-heads of state have been tied to the Odebrecht corruption scandal.

The vote doesn’t change everything necessarily, “but it is the beginning of a change that we are looking for in Peru,” said President Martín Vizcarra. From money laundering to undisclosed personal ties and bribes, the referendum is a step towards trying to fix decades of ingrained and systemic political misconduct.

MEXICO: Mexico will spend $30 million dollars on a development program for Central America’s Northern Triangle region, said Foreign Minister Marcelo Ebrard yesterday. Diplomats from Honduras, Guatemala and, El Salvador met with Ebrard during the U.N. migration conference to discuss the initiative. The Northern Triangle program—region from which the migrant caravans have originated – aims to address the reasons migrants leave their home countries as well their safety during and after the journey.

MEXICO: President Andrés Manuel López Obrador pledged to take a salary of 108,000 pesos ($5,300) per month, and claimed that some judicial branch salaries are “offensive.” He said he’ll leave it to Congress to implement his call for austerity, potentially resulting in pay cuts for many federal government employees.

THE U.S.-MEXICO BORDER: More migrants expressed fear returning to their home countries this year than last, according to a report released yesterday by United States’ Customs and Border Protection agency. This is the first time the agency has publicly released the number. Nearly 93 thousand migrants stopped at the border made “credible fear” claims between September 2017 and 2018, compared to almost 56 thousand the year before. Additionally, officials said 2,200 of the original 5,200 troops deployed to the border will be withdrawn.

DOMINICAN REPUBLIC: Though 164 nations ratified the first international pact on migration, the Dominican Republic is one of 10 countries that opted not to sign the deal. Along with the United States, Chile, and other countries, Flavio Darío Espinal —a top political advisor— expressed the Global Compact for Safe, Orderly and Regular Migration agreement “contains provisions contrary to the national interest.”

PUERTO RICO: Governor Ricardo Rosselló signed a bill yesterday creating an earned income tax credit. He said the new tax bill will give workers between $200 and $2,000 annually. The reform also cut taxes for small businesses and corporations, legalized slot machines, and dropped a tax on processed food from 11.5 percent to seven percent.

PUERTO RICO: Representative José Aponte Hernández pledged to ask the U.S. Congress to study a resolution proposed by the National Hispanic Caucus of State Legislators. The caucus seeks to exempt Puerto Rico, Hawaii, and Alaska from the cabotage Jones Act. The act requires that all maritime cargo between the continental United States and Puerto Rico be carried out on U.S.-built, -owned, -flagged and -crewed, ships. Hernández said this measure “has a devastating effect on the price paid to bring goods such as basic necessities, food, and even fuel.”

Call Prime Minister Dr. Keith Rowley at 377 9527 if you are unhappy with the collapse of the sea bridge and wastage of the money spent on the Galleons Passage without any procurement process?

NICARAGUA: President Daniel Ortega’s government announced it will give 1,000 inmates the “presidential pardon” this month during the holiday season, as a way to commemorate 70 years of the Declaration of Universal Human Rights. Currently, Nicaragua is living through a sociopolitical crisis, resulting in one of the worst humanitarian crises in the last 30 years.

GUATEMALA: Guatemala’s Movimiento Semilla officially became a political party and could potentially have a candidate for the upcoming presidential elections. Thelma Aldana, Guatemalan jurist and former President of the Supreme Court and Attorney General, has met with Semilla, but her participation in the presidential elections has not been confirmed.

BRAZIL: Authorities said fuel thieves are responsible for a major oil leak in Rio de Janeiro over the weekend. The thieves punctured a pipeline in the Guanabara Bay, releasing about 15,850 gallons of oil. In other environmental news, a new study published yesterday shows that illegal gold mining in the Amazon is now “worse than at any other time in history,” threatening protected lands, including indigenous territories. According to the study conducted by a group of environmental organizations, Venezuela had the most illegal gold mines, followed by Brazil and Ecuador.