Brazil to Opt Out of UN Migration Accord 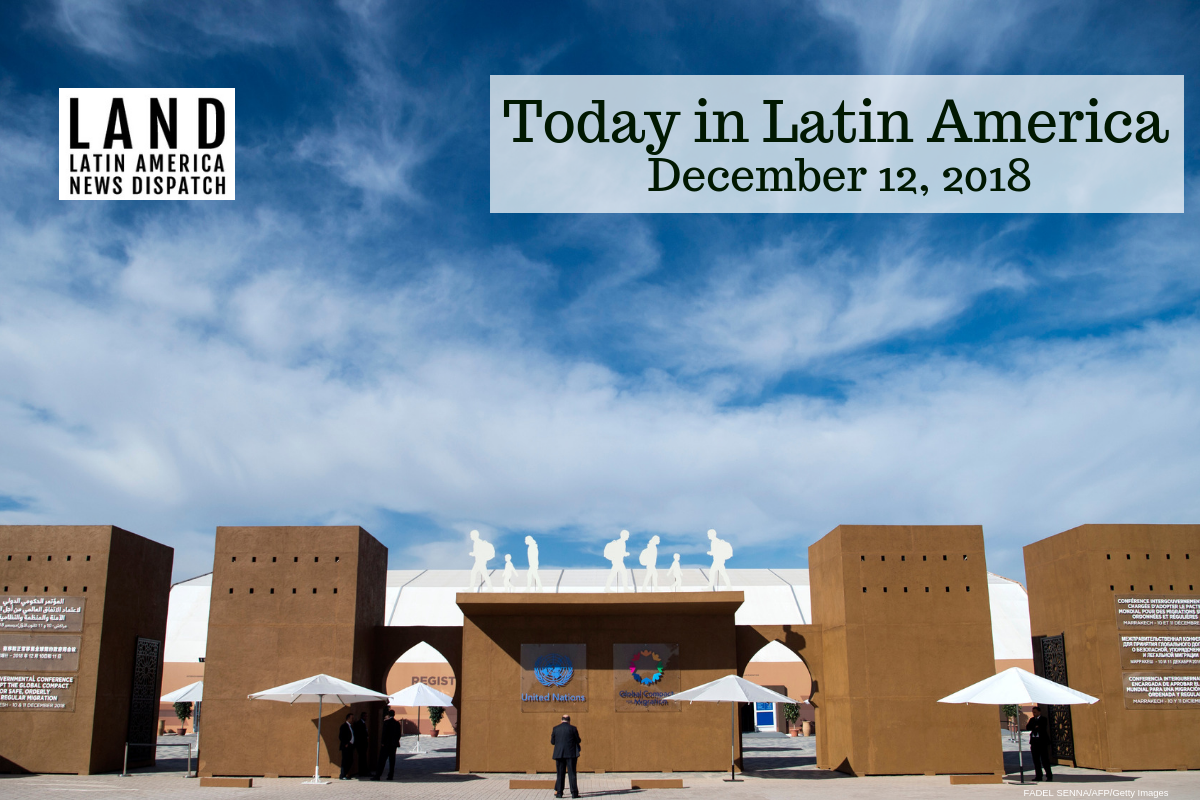 The venue of the international conference on Global Compact for Migration. December 11, 2018. Marrakech, Morocco. (Photo by Fadel Senna/AFP/Getty Images)

BRAZIL: Brazil will join the United States, the Dominican Republic, and Chile by opting out of the U.N. migration accord signed Monday in Morocco. Though Brazil signed the agreement on Monday, along with 163 other governments, the incoming foreign minister, Ernesto Araujo, said the country will pull out of the agreement in January when President-elect Jair Bolsonaro takes office.

Ten other countries also declined to sign the U.N. accord. When the text of the agreement was approved in July, only the United States rejected it, arguing that it undermined the power of individual governments to control borders. Since then, Chile, the Dominican Republic, Australia, and several European countries have also opted out. In discussing his country’s stance, Chile’s interior ministry subsecretary said, “Migration is not a human right.”

MEXICO: At an event in Morelos, one of the areas most affected by the September 2017 earthquake, President Andrés Manuel López Obrador announced his new National Reconstruction Plan. The plan will focus on the construction of new housing and health centers, as well as the rehabilitation of schools and buildings recognized as important to national heritage. The initiative will involve a number of key Secretariats within the federal government, including health and public education.

UNITED STATES: A judge dismissed most of a lawsuit filed by the International Refugee Assistance Project against the Trump administration regarding the government’s decision to end the Central American Migrant Program, which allowed Central American parents legally in the United States to apply to bring their children. The judge ruled that 2,700 of the applications that the Trump administration rejected since ending the program in November 2017 needed closer analysis, but that administration had grounds to end the program.

UNITED STATES: A televised meeting between President Donald Trump and Democratic House and Senate leaders Nancy Pelosi and Chuck Schumer devolved into a shouting match in the Oval Office. The dispute, which ranged a number of topics but primarily focused on the funding of the U.S.-Mexico border wall, ended with Trump saying that he would be “proud to shut down the government for border security.”

PUERTO RICO: More than a year after Hurricane María hit the island, Puerto Rico’s power company says it will hire private firms to repair 106,000 streetlights that were damaged in the storm and are still not working. The project is expected to be completed in eight or nine months with an estimated cost of $40 million.

BARBADOS: Former minister of social transformation Hamilton Lashley called on legislators to give the Rastafarian community and small farmers priority in the soon-to-be-legalized medical marijuana industry. The objective is to guarantee that vulnerable populations benefit from the industry, he said.

COSTA RICA: Chancellor Epsy Campbell resigned yesterday in the wake of a controversy regarding irregular appointments in management positions in the Ministry of Foreign Affairs. Before the General Assembly, she said she was resigning for the sake of the country and to focus the public discussion on relevant issues.

VENEZUELA: Billy Six, a freelance German journalist, was sent to jail in Venezuela under charges of espionage and other offenses after interviewing people with his hand-held camera. Six, who was arrested three weeks ago, has circled the world talking to people who live through wars and strife and telling their stories. His arrest alarmed press freedom organizations. Though the Venezuelan government has shown little tolerance for journalists, international correspondents are typically spared the harsh treatment that local reporters receive.

ARGENTINA: Two former Ford Motor Co. executives were sentenced to prison for rounding up 24 union workers who were held and tortured in military jails during the country’s dictatorship. An Argentinian court ruled that Pedro Muller, manufacturing director, and Hector Francisco Sibilla, security manager, gave information to government agents for the kidnapping of the laborers after the 1976 coup. Sibilla, 90, was sentenced to 12 years and Muller, 86, to 10 years for their crimes against humanity.