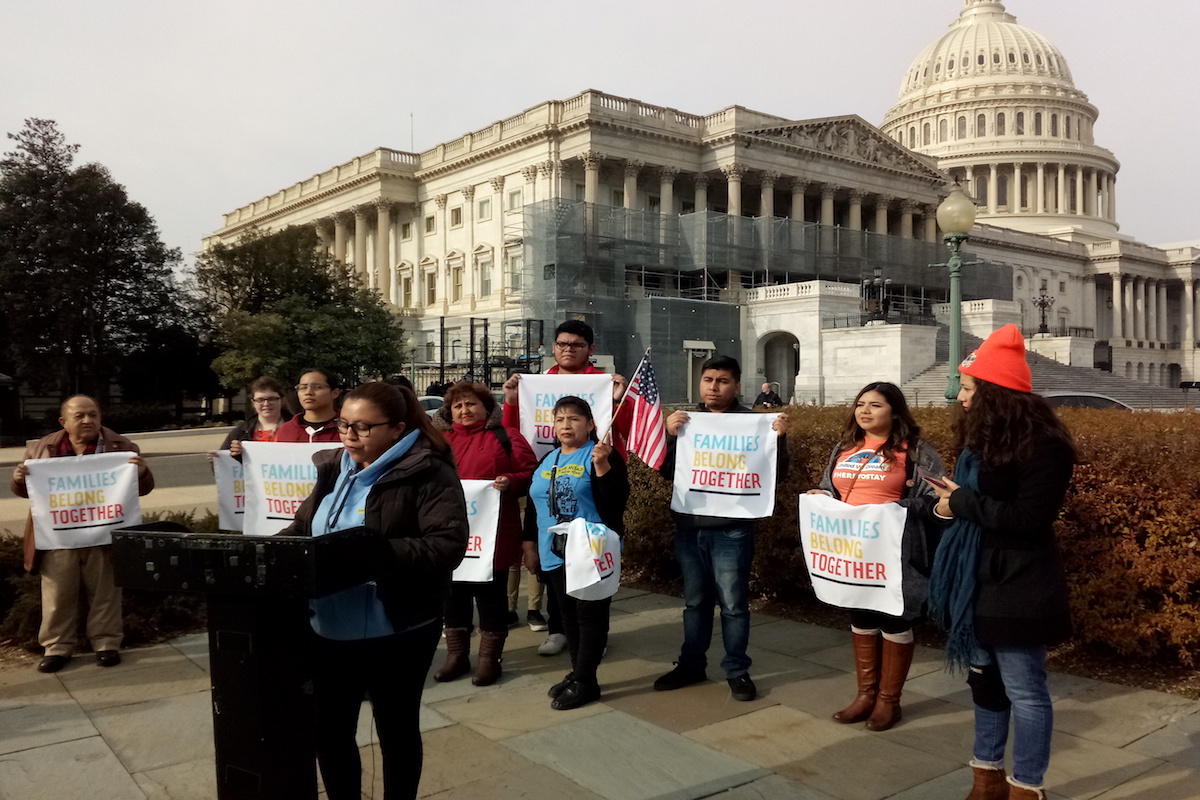 WASHINGTON, D.C. — Chanting several slogans, including “up with liberation, down with deportation” and “we are the mighty, mighty immigrants fighting for justice,” a coalition of immigrant rights groups held a small rally today in front of the Capitol building, demanding that Congress consider completely defunding the Department of Homeland Security and its agencies within, such as U.S. Customs and Border Protection (CBP) and U.S. Immigration and Customs Enforcement (ICE).

Last week, President Trump signed a stopgap measure to keep the government open until December 21 to fund agencies through the next fiscal year, which ends in September 2019. The immigrant groups say ICE, CBP, and other agencies have been engaging in inhumane practices under the Trump administration’s hardline “zero tolerance” stance on immigration, which has included detaining immigrant minors separately from their parents and tear gassing a group of immigrants gathered at the U.S. border in Tijuana on November 25.

“We will not tolerate one cent more for DHS and the atrocities they commit against our families. Republicans have stayed silent as the president mounts his attacks on immigrants and families. Now is the time for Republicans to respond to their constituents and stop funding DHS’s irresponsible, wasteful and dangerous programs on the border. Democrats must stay strong and pass a clean budget bill by December 21st. We cannot give in to the president’s dangerous agenda,” said Claudia Quiñones with United We Dream.

At a Senate Judiciary Committee hearing on Tuesday, CBP Commissioner Kevin defended the tear gas as necessary to break up a melee of an “assaultive” crowd that was throwing rocks at Border Patrol agents.

“I think it’s remarkable that agents were able to resolve the situation without any serious injuries or a breach of the border,” McAleenan told senators.

The immigrant rally also comes a day after a testy showdown in the Oval Office, where Trump told Democratic leaders Chuck Schumer and Nancy Pelosi he would “totally be willing” to shut down the government if he is not given full funding for a wall along the U.S.-Mexico border, tweeting later in the evening that he would have the military build the wall if Democrats —who insist he doesn’t have the votes even among his fellow Republicans— don’t agree to the funds.

….People do not yet realize how much of the Wall, including really effective renovation, has already been built. If the Democrats do not give us the votes to secure our Country, the Military will build the remaining sections of the Wall. They know how important it is!

Trump has demanded $5 billion as part of a plan for a border wall but Democrats and other opponents contend the wall is ineffective and a waste of money.

“Our democracy cracked a little more as Donald Trump made a mockery [at the meeting with Schumer and Pelosi] of the office, putting on a show in front of cameras over a wasteful and dangerous wall,” said Alma Couverthie with the group Firm Immigration Reform Movement. “We watched as leaders Schumer and Pelosi tried to do what’s right and defend families in the face of hate. That is a result of the pressure our communities have put on the Democratic leaders to hold the line and we are here to make our voices heard even louder, not one dollar for Trump’s deportation machine. We are here to demand that Congress defund hate and stop this madness because our families should never be used as bargaining chips.”

Schumer had offered $1.6 billion in border security, which the White House rejects as too little and immigrant groups reject as too much. The New York Democrat’s office has said the funding would not be earmarked for a wall along the southern border, but rather for fencing and other security initiatives. Immigrant groups say they aren’t buying it.

Raised in Puerto Rico, Patricia Guadalupe is a bilingual multimedia journalist based in Washington, D.C., covering the capital for both English and Spanish-language media outlets. She tweets from @PatriciagDC.