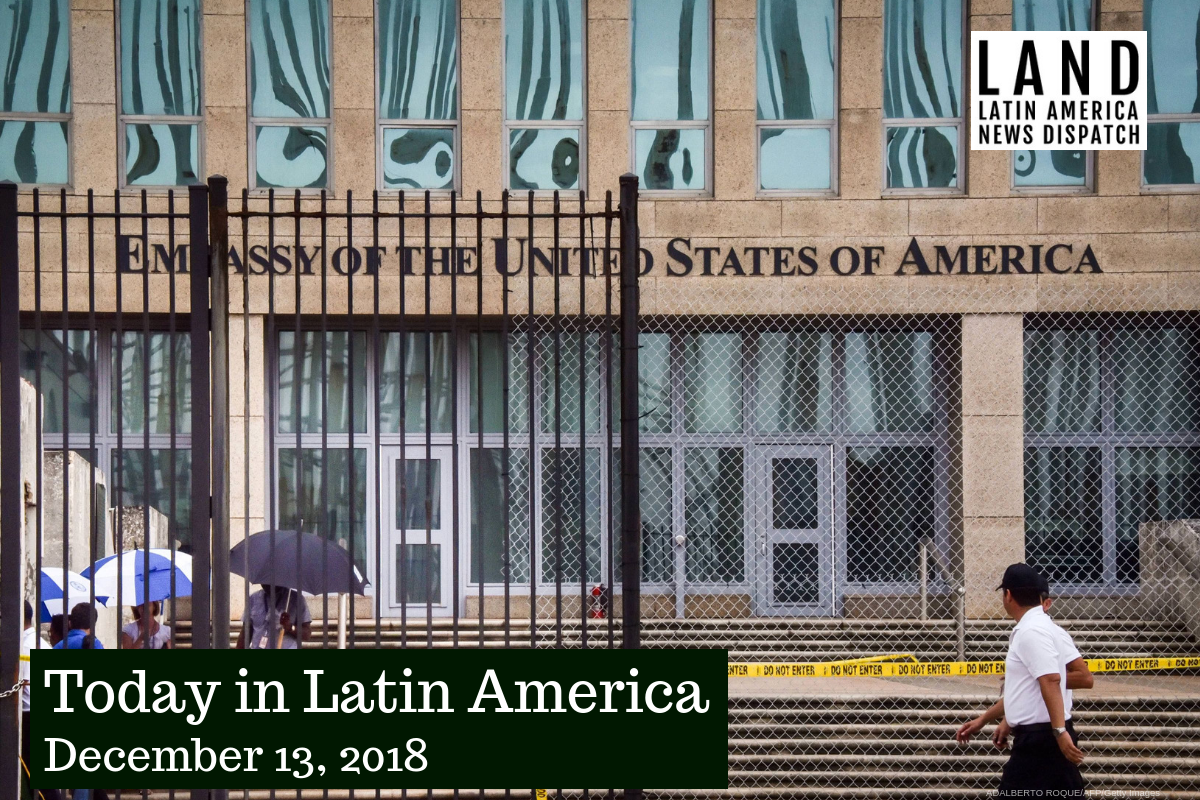 Picture of the US embassy in Havana, taken on September 29, 2017 after the United States announced it is withdrawing more than half its personnel in response to mysterious health attacks targeting its diplomatic staff. (Photo by Adalberto Roque/AFP/Getty Images)

CUBA: Two years after the so-called “sonic attacks,” at the U.S. embassy in Cuba, medical reports confirm that the diplomats were physically injured and didn’t suffer from some sort of hysteria. The report revealed that American diplomats had inner-ear damage.

According to the first doctors that examined the diplomats, they heard a high-pitch sound and then felt a high-pressure sensation that provoked dizziness, difficulty concentrating, and insomnia.  The incident led to the close of the U.S. embassy in Havana.

MEXICO BORDER: Beach-goers in southern California were asked to stay out of the ocean yesterday, as sewage continued to flow down the Tijuana River and into the Pacific. According to Mexican officials, a leak in a collector pipe of a sewage treatment facility has dumped 6 million gallons of waste liquids a day. After a similar spill last year, the attorney general of California sued the U.S. federal government for failing to establish sufficient cautionary and cleanup mechanisms.

DOMINICAN REPUBLIC: The National Confederation of Organizations of Transportation forbade drivers to allow people from Haiti to board public buses, in order to avoid problems with immigration authorities. Antonio Marte, president of the Confederation, argued that ten buses have been confiscated after undocummented immigrants were found riding them.

PUERTO RICO: Six men have been charged with the murder of Maurice Spagnoletti, a New York banker who was slain seven years ago after he began an investigation on improper bank transactions. General Attorney Rosa Emilia Rodríguez said Sapgnoletti was murdered as part of a plot for money laundering.

NICARAGUA: Wells Fargo Bank, Bank of America, Citi Bank and JP Morgan Chase will cease cross-frontier correspondent banking operations in Nicaragua, due to the increasing financial risk of the country. However, other companies disregarded the action and said that international bank transferences will continue in a normal manner.

COLOMBIA: The lower legislative house struck down a proposed amendment yesterday that would have allowed President Iván Duque to issue arrest warrants for former FARC rebels. Critics, including the United Nations, worried that the amendment would supersede special justice tribunals established by the 2016 FARC peace accord, legitimizing dissident rebel factions and encouraging more former rebels to once again take up arms.

VENEZUELA: President Nicolás Maduro accused the White House yesterday of direct involvement in last year’s apparent assassination attempt against him. Maduro also alleged that Jair Bolsonaro, the far-right president-elect of Brazil, has hatched plans to invade Venezuela. While both Bolsonaro and the Trump administration have openly discussed regime change, Maduro provided no specific evidence of these claims.