Protests Arise After Guatemalan Girl Dies in US Custody 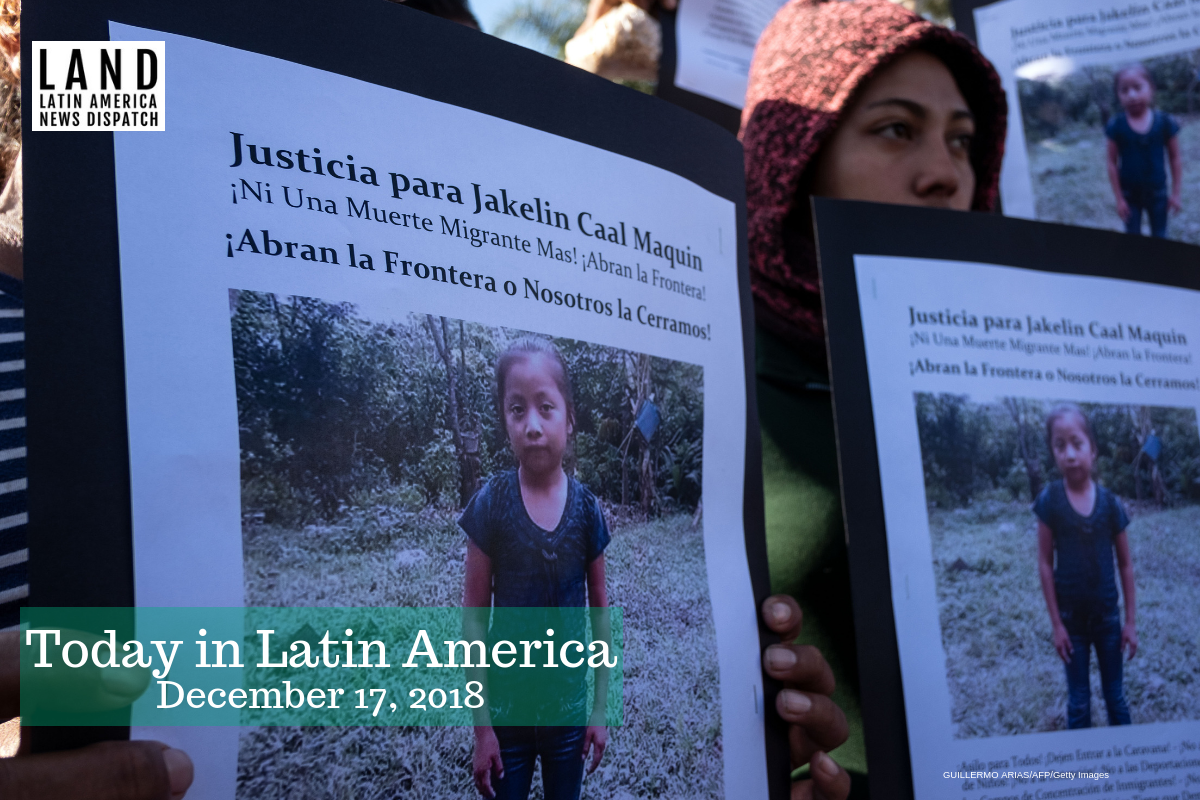 Central American migrants hold a demonstration outside a temporary shelter in downtown Tijuana on December 15, 2018, following the death of 7-year old Jakelin Amei Rosmery Caal Maquin, who died in a Texas hospital two days after being taken into custody by border patrol agents in a remote stretch of New Mexico desert. (Photo by GUILLERMO ARIAS/AFP/Getty Images)

THE U.S.–MEXICO BORDER: Protests have been held at the U.S.-Mexico border after a seven-year-old girl who traveled north from Guatemala died in custody. As part of a group of 163 people who turned themselves in to U.S. agents, Jakelin Amei Rosmery Caal Maquin was taken into custody by U.S. Customs and Border Patrol (CBP) on December 6 in New Mexico. CBP told The Washington Post that Jakelin had not had anything to drink or eat in several days, alluding to her journey through the desert. Upon registering a 105.8-degree body temperature and having seizures, Jakelin was flown to a children’s hospital in El Paso, Texas. Although being revived from a cardiac arrest, Jakelin died less than 24 hours after being transported to the medical facility, on December 8.

Jakelin’s father, Nery Caal, disputes the claim that his daughter had not had anything to drink or eat. Mr. Caal, 29, and his daughter set out on December 1 and traveled for over 2,000 miles. Mr. Caal said that Jakelin had not been deprived of food or water and appeared to be in good condition as they approached the border. However, he said he has “no complaints about how Border Patrol agents treated him and his daughter,” Guatemalan Consul in El Paso, Tekandi Paniagua told CNN, although lawyers for Nery do not agree. Jakelin looked forward to sending money back to her family back in San Antonio de Cortez, in central Guatemala.

MEXICO: On Saturday evening, Finance Minister Carlos Unzúa presented the 2019 budget to the lower house of Congress. While no tax raise or increase in debt is expected, Unzúa pledged to increase welfare and infrastructure spending, with an emphasis on doubling pensions and apprenticeships for the 2.6 million unemployed youngsters in Mexico. The budget also proposes cuts to several ministries and judiciaries, with whom President Obrador might clash following his proposal to limit earnings for public servants.

CUBA: Economic forecast for 2019 is expected to be similar to this year, at a sluggish 1 percent growth rate. Cuban Minister of Economy Alejandro Gil Fernández explained yesterday that export revenues are expected to decline for the fourth consecutive year. Cuba’s economy grew 0.5 in 2016 and 1.7 in 2017. Experts are pointing at Venezuela’s economic collapse and President Trump’s reversal of many Obama-era policies toward the island as the main causes of slow economic growth. Austerity measures that started in 2016 are expected to continue.

NICARAGUA: On Saturday, Nicaraguan police occupied the building of El Confidencial, an independent media outlet which has documented abuses by government security forces and paramilitaries since April. Their offices were ransacked by security forces. Reports said that journalists protesting the raids outside a police station in Managua were beaten by riot police. The police also seized the headquarters of the CENIDH, Nicaragua’s leading human rights group. This is Daniel Ortega’s latest crackdown on civil dissent since the April protests.

VENEZUELA: In the largest exodus in recent Latin American history, the number of Venezuelans leaving the country is on track to reach 5.3 million by the end of 2019, according to the United Nations. The largest number of migrants are going to Colombia, a trend that is likely to continue. Migrants are leaving amid hyperinflation and growing medical and food shortages. To accommodate the influx of migrants in other countries, humanitarian organizations would need $738 million for food and emergency shelters, according to the United Nations High Commissioner for Refugees.

BRAZIL: Rio de Janeiro’s public security secretary said Friday that Councilwoman Marielle Franco, who was shot to death in March, along with her driver, was killed by militia members. Gen. Richard Nunes did not name any suspects, but he said the militia members saw Franco as a threat to their efforts to take over land in part of Rio de Janeiro. In Brazil, militias are criminal organizations established in poor communities without strong government structures.

BRAZIL: Brazilian faith healer João Teixeira de Faria, who is accused of sexually abusing more than 300 women, turned himself in Sunday. He was deemed a fugitive after failing to turn himself in to authorities by 3pm Saturday. De Faria is well-known for performing “psychic surgeries” that he says can cure diseases, including cancer. Allegations of sexual abuse began to emerge last week on a television show. More than 300 other accusers, including de Faria’s daughter, came forward following the initial accusations.