A Savior’s Christmas: Adopted Into an Evangelical Nightmare (PART TWO) 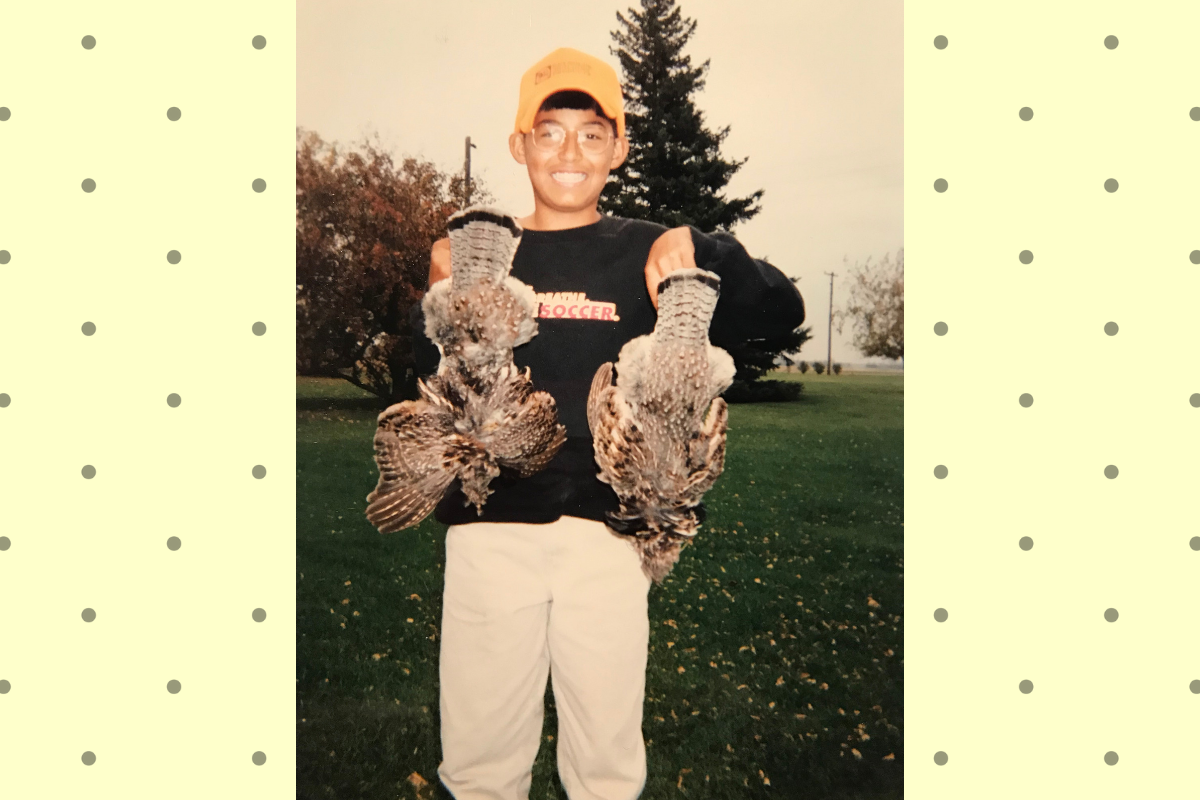 The author, back in the day

The following story is incomplete. Consequences of events will be introduced without context, and you will be asked to piece together morals, if any, for yourself. Moreover, I must admit that in the grand scheme of things, I am relatively lucky. I made it through, and with enough sense to hopefully make some sense of it all.

I was adopted into a nice community in the mid-1980s. The male did sales during an economic rise, and the female taught grade school. They saved me, I made them smile, Jesus saved us all, and I knew nothing of what their tax dollars were doing in my homeland.

It was best this way…

Adoption can take many forms. Cross-cultural and cross-racial adoption of transracial adoptees can bear many similarities to abduction. In such instances, adopting an infant child is preferred.

The first thing to do when kidnapping someone, if you want things to work out long term, is change their name. Psychology 101 says to get them used to being identified by a word you have determined and defined.

This creates a cerebral break with whatever before happened. Person A was an orphan, while Person B is our child. Person B is healed now, and has a forever home.

I continue to be torn about why I was adopted. Why would you adopt a brown child if you are racist? It makes ZERO sense. The conclusion is so ugly and perverse, and I think it’s this:

You adopted a brown child so that you could take credit for any of their achievements while having plausible deniability for any of the foibles or failures to which you’d rather not be attached.

Frustratingly, this is the only narrative that seems consistent across the experiences.

I was 21 when I heard the words out of the woman who bought me. To the mother of my own child she said, “You never know what you’ll get when you adopt from a developing country.”

I don’t know if I’ll ever come to terms with the notion that I was adopted to fulfill another woman’s fantasy. Nor in the lengths and depths to the community has been willing to go to support such dementia. Those one would think were progressive and open, could only able to push the rote narrative, “They love you, and you need to realize that.”

The first memory of being labeled by my peers as different was in kindergarten. We would play the game, as it was called, “Duck Duck, Grey Duck.” Yet when it would come to me, it was, “Duck, Duck, Duck, Brown Duck.” It was innocuous, a largely benign action. But it was the first hairline crack in the glass house that had been built around me.

After changing my name, the trick had been to never overtly treat me any differently than any other child. The color of my skin was a quirk only to be mentioned in positive lights, less need for sunscreen and certain colors “really pop” on me. It wasn’t until my late teens that I could finally close my eyes and see my own face in my own mind.

I was placed on the church stage near the age of 5 to perform in musicals. Piano lessons started at age 6. When we went up north to visit the grandparents, I was brought to the nursing home to play for the residents.

I was adopted for a purpose and I learned to serve it.

Church provided the social environment, and a sense of purpose that school never could. Family provided the sense of belonging the church never could or would. Yet because I was brown, the only people I ever felt truly “comfortable” around were my primary captors. I was the perfect pet. I listened, sang and danced.

Stockholm syndrome, psychological response wherein a captive begins to identify closely with his or her captors, as well as with their agenda and demands. (Britannica)

The people who bought me had grown up on farms, where animals rarely went in the house. We lived in the suburbs, so having any pets simply wasn’t reasonable. (Though I did have a pet hamster in the first grade—not ideal for an only child.)

We lived near old-money. These were families who had grown up together, and now their kids played with each other. There continues to be airs of baronage in the area. And while I had been adopted into their community, it was by people who weren’t of their same pedigree.

However could I be?

‘Jesus May Love You, But’

While we all may have been made is God’s perfect image, not all of us are equally perfect within the body of Christ. So begins our daily routine of mental gymnastics. For even after we have asked for forgiveness, and received it, our community will never see us as a complete equals. Nonetheless, we will maintain a charade.

Trickle-down economics of emotion demand this narrative be carried by those below them. Unconsciously, this follows what Paulo Freire warned us about, “The oppressed, instead of striving for liberation, tend themselves to become oppressors. It is our four pillars that we use to keep these thoughts at bay.

While God may never give us more than we can carry, God did not allow these people to have children. He granted them the opportunity to save one of the wretched bastards from a still civilizing country.

God granted them this child to carry their pain of being childless. God had granted this child, the opportunity to be white, but not quite. And any criticism is framed as ingratitude. This is Providence, and it requires our Faith.

Jesus loves you, and so do we.

All in the Family

“She’s crying because you look like poop,” my cousin told me once.

His baby sister had been born a few months previous. I can’t remember whether he said, “poop” or “shit,” though I continue to rack my brain as to where from the words were summoned.

Music was always a part of our family. I wasn’t allowed to play the drums or saxophone because it was easier to borrow my aunt’s silver trumpet. This cousin played the clarinet. But his dad told him he would buy him a Les Paul guitar if he learned how to play “Sweet Home Alabama” by Lynrd Skynrd.

The aunt from that family is the same one who would oft ask if I was having “another episode.”

But you won’t believe any of it. You already have the story with every line you need. And you’ll push this narrative on to the woman who bought me.

Something must be wrong with me because I have these “episodes.”

Yes, I was a part of the family, but “Why don’t you play football?” is what one uncle commented. And apparently, whenever my other uncle had insomnia, he too would watch soccer. It was an innocent Christmas joke. Yet for me, watching fútbol on DirectTV at the grandparents’ house was the only place I could see brown people, like myself, who weren’t behind a fast-food counter or acting on a screen.

That was until I attended a summer camp for children adopted from Latin America. Their heart was in the right place, perhaps. But it could never be enough to bridge the chasm between us when I ordered a #3 no cheese.

Moreover, we can guess who was our teacher.

The woman who bought me.

Sidenote: for the poetry of it all, I was adopted the year before Colombia required adopting parents to travel to the country to get their “dreams come true.”

So she has never even been to Colombia.

I suppose all of this would have been well and good were I able to provide for myself with a minimal amount of tumult. Though from my first official job onwards, this has not been the case. The narrative that my existence is merely sport for others to try themselves against seems to have it’s own inertia.

I worked at a coffee shop in town as a junior in high school. It was a wonderful excuse to not have to attend Sunday morning church. Though when spring came, my schedule wouldn’t permit me to work, so I put in my two weeks notice.

On my last day, I left the key in the office and locked the door behind me. Then, I was told that I had stolen the key so they were withholding my last check, when I went to get my last check,.

What was I going to do with the key? Steal money? What for? I seriously never had any need for money at that time. I was raised strictly as an evangelical Christian, and while I may have been waking from the nightmare, I had an intrinsic aversion to theft considering how much I felt has been stolen from me.

At times, I wonder if the people who bought me thought I had stolen the key as well. They were of no support through the accusation. And I have since heard them hold on to uglier narratives to justify their actions.

So Begins the End

I had recently returned to the University with a degree I was passionate about pursuing. Moreover, I had just gotten the perfect job, working remotely with Python. I was in love with myself, and I had asked the people who bought me to wait until I had finished my semester to continue pursuing time with my daughter. But they could not wait, nor respect my wishes.

I received an email one Sunday morning to learn that they had not just gone behind my back using the sister-in-law of my college roommate, who was a lawyer. They had signed an agreement to not tell me anything about their visits.

This is the second time in my life that I physically felt my heart go into convulsions. These people felt that they had a right to my daughter. They would support the notion that I was unfit, and agree that I should not be told anything about her either. Their conclusion being it would only aggravate a “stable” situation.

When I told the male who bought me how this made me feel, he suggested that I just go ahead and kill myself then.

It made sense, they had their replacement—and a definite upgrade.

All they had to do was tell the courts what they had been telling themselves all along.

I am mentally and emotionally unstable.

Entirely unfit to be a parent.

CultureClap is the moniker for someone who has had many names in their life and is still trying to figure out which ones are real. He tweets @CultureClap and more information can be found at CultureClap.com