Remembering the Caravan: 5 Essential Reads That Show the Desperation of Central American Migrants

By Catesby Holmes, The Conversation

Editor’s note: As we come to the end of the year, Conversation editors take a look back at the stories that —for them— exemplified 2018.

A mother, determined and frantic, sprints with her two children, escaping a trail of tear gas. She wears a “Frozen” T-shirt. Both girls are in diapers; one runs barefoot.

In an age when photos arise, shape-shift and disappear with the swipe of a thumb, this image was indelible. It captured the moment, in November 2018, that María Meza and her twins were gassed at the U.S.-Mexico border after traveling 3,000 miles by foot, train and truck from violence-plagued Honduras.

In a year of harrowing immigration news, the Central American caravan was not the biggest story. That was the Trump administration’s policy of detaining migrant children. What the caravan story exposed, singularly, was the desperation driving international migration.

As international editor at The Conversation, I wanted our coverage to follow the facts that explained this human drama, not amplify political rhetoric about refugees.

The caravan began on October 13 in Honduras with about 200 people. As it moved through Honduras and Guatemala, thousands more joined its ranks, fleeing one of the world’s deadliest regions.

“Central American children are 10 times more likely to be murdered than children in the United States,” Acuna Garcia says.

President Donald Trump saw the caravan differently, tweeting that the group was “an invasion” of “criminals and unknown Middle Easterners.”

So I asked migration scholar Karen Jacobson of Tufts University to explain why migrants often travel in groups.

“Whether crossing Central America, the Sahara desert or the mountains of Afghanistan, migrants are regularly extorted by criminals, militias and corrupt immigration officials who know migrants make easy targets: They carry cash but not weapons,” Jacobson wrote.

In early November, human rights scholar Luis Gómez Romero reported that two trucks had disappeared from the caravan in Veracruz, Mexico. A survivor told officials that “65 children and seven women were sold” to armed men.

“On average, 12 people disappear each day in Mexico, victims of a raging three-way war among the Mexican armed forces, organized crime and drug cartels,” Gómez Romero wrote. “Nearly 22,000 people were murdered in Mexico in the first eight months of 2018.”

People missing for more than 24 hours are rarely found in Mexico—alive or at all. 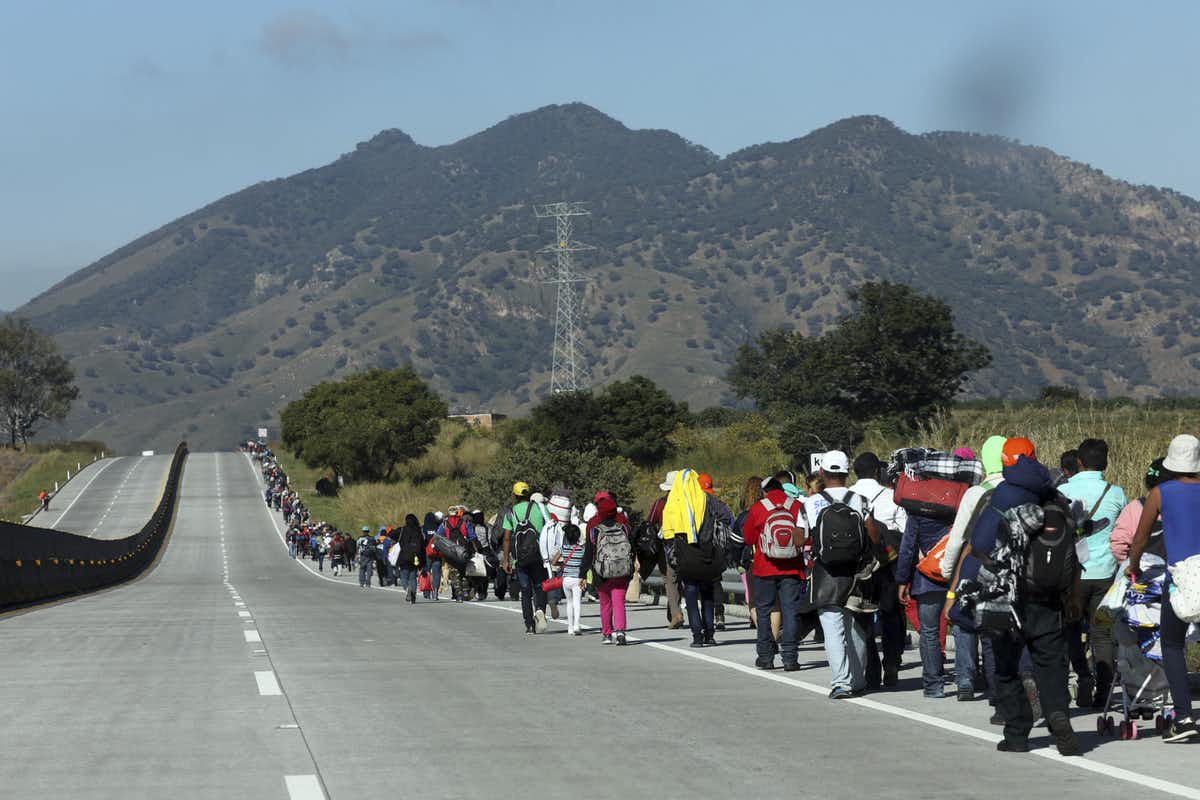 For migrants, the journey across Mexico is a perilous one. (AP Photo/Rodrigo Abd)

Central Americans fleeing violence have the right to claim asylum in the U.S., but proving they have a “credible fear” of persecution is difficult.

Families tormented by gangs back home “struggle to fit their experiences into the boxes created by [refugee] law,” says Abigail Stepnitz of the University of California-Berkeley.

This view ignores the global forces that connect nations, says immigration researcher Felipe Filomeno, from the University of Maryland-Baltimore County.

“The extreme violence, environmental disasters and grinding poverty that drive people from places like Guatemala, Honduras and Afghanistan are largely the result of global phenomena like colonialism, climate change and trade.”

That means rich countries —which created and profited from these processes— share responsibility for “the people displaced by globalization.”

On December 17, María Meza’s family crossed into the United States as asylum seekers, The New York Times reported. Their claims of gang persecution may take years to decide.