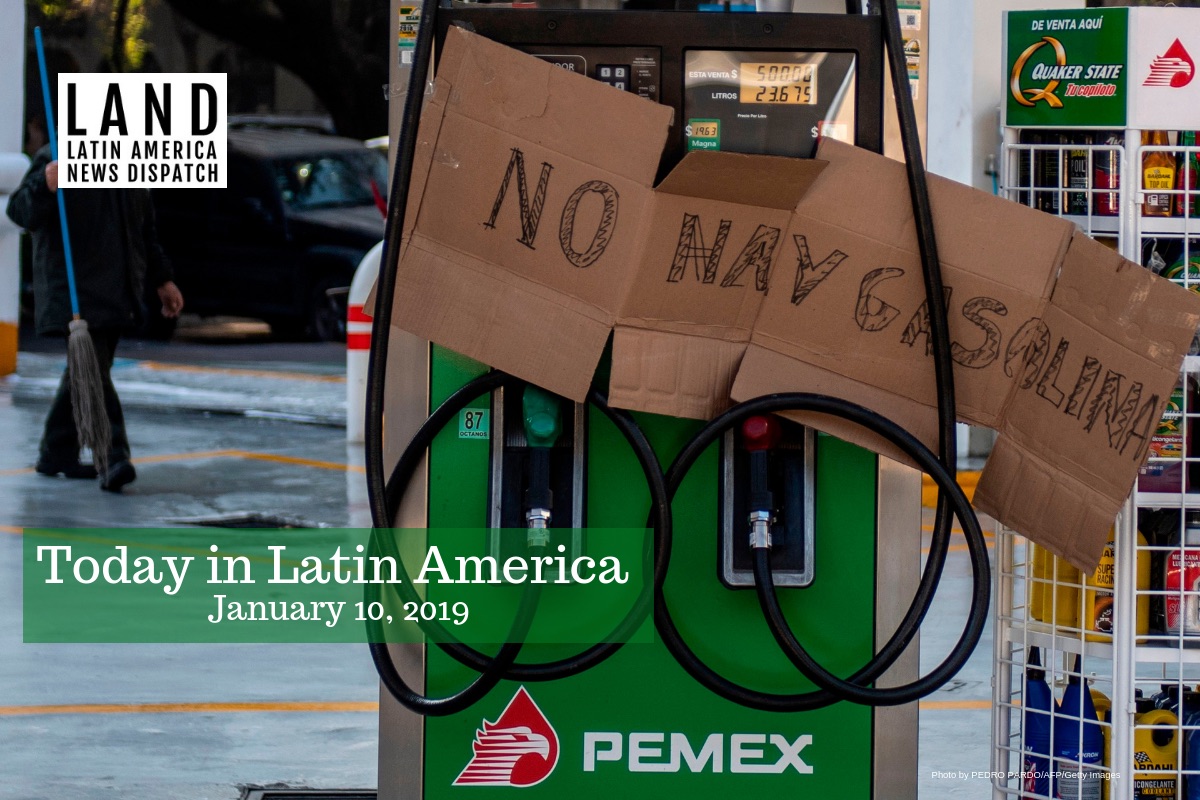 View of a gas station closed due to lack of fuel in Mexico City, on January 9, 2019. (Photo by PEDRO PARDO/AFP/Getty Images)

López Obrador has closed fuel ducts and reverted to transporting fuel by tanker trucks across midwestern states and deploying soldiers to guard fuel depots. He believes that thefts have colluded with buyers and employees working in refineries, specifically those in state-owned Petroleos Mexicanos company. The president expects the problem to be solved soon, but has not said when he will re-open the fuel ducts.

UNITED STATES: Nineteen days into the government shutdown, President Donald Trump continued to make his case for the $5.7 billion wall at the U.S.-Mexico border following his national address Tuesday night. Trump called the influx of migrants a “humanitarian crisis.” Democrats are still unwilling to pay for the wall, and after making that clear in a meeting between Senate Minority Leader Chuck Schumer, House Speaker Nancy Pelosi and Trump, the president stormed out of the room. Trump reaffirmed that he may declare a national emergency to build the wall, but expects to keep the government shutdown until Democrats budge.

MEXICO: Following a month of debate, Mexico’s Supreme Court agreed to López Obrador’s proposal to reduce their salary by 25 percent. The Mexican president claims that justices currently earn $360,000 per year, but the court argues they make half as much, although it has not been verified. López Obrador has pushed for austerity since his first day of office on December 1, 2018, when he decided to cut his own salary by more than 50 percent to $60,000 and chose to live in his small home rather than the city’s national palace, Los Pinos.

JAMAICA: With 4.31 million visitors, the island recorded an 8.6 percent increase in tourism revenues for 2018. Despite being in a state of emergency between September and October 2018, Jamaica was able to collect $3.3 billion, incentivizing small and medium businesses in the hospitality sector.

GUATEMALA: Guatemala’s Constitutional Court overruled President Jimmy Morales’ decision to unilaterally end an anti-graft commission’s mandate. On Monday, Morales announced his decision to end the U.N.-backed anti-corruption initiative, CICIG, which had operated in Guatemala for over a decade. Although most of CICIG’s personnel has now left the country for security concerns, the United Nations reiterated that Colombian jurist Iván Velásquez willcontinue as commissioner until the end of the established mandate, on September 3.

VENEZUELA: Maduro will be sworn into office for his second six-year term as president today. Maduro has faced increasing international pressure in the weeks leading up to his inauguration, with 13 of the 14 regional Lima Group countries stating that they will not recognize Maduro’s administration.

Meanwhile, Human Rights Watch and the Venezuelan human rights group Foro Penal released a joint report yesterday, stating that Venezuelan authorities detained and tortured military personnel for allegedly plotting against Maduro’s government. “In some cases they are also going after [suspects’] families or other civilians when they can’t find the suspects,” José Miguel Vivanco, Americas director at Human Rights Watch, told the AP.

BRAZIL: President Jair Bolsonaro tweeted yesterday that immigrants coming to Brazil should sing the national anthem and respect Brazilian culture, following his continued attacks on and threats to withdraw from the U.N. Migration Pact. The former Brazilian administration signed the pact only weeks before Bolsonaro took office on January 1. “Immigration cannot become an indiscriminate act. It is imperative for us to establish proper criteria for each country,” Bolsonaro tweeted. “If we control those who enter our homes, why should it be different with Brazil as a nation?”