Where Will Venezuela Go Next? The Answer Is Hard to Determine Right Now 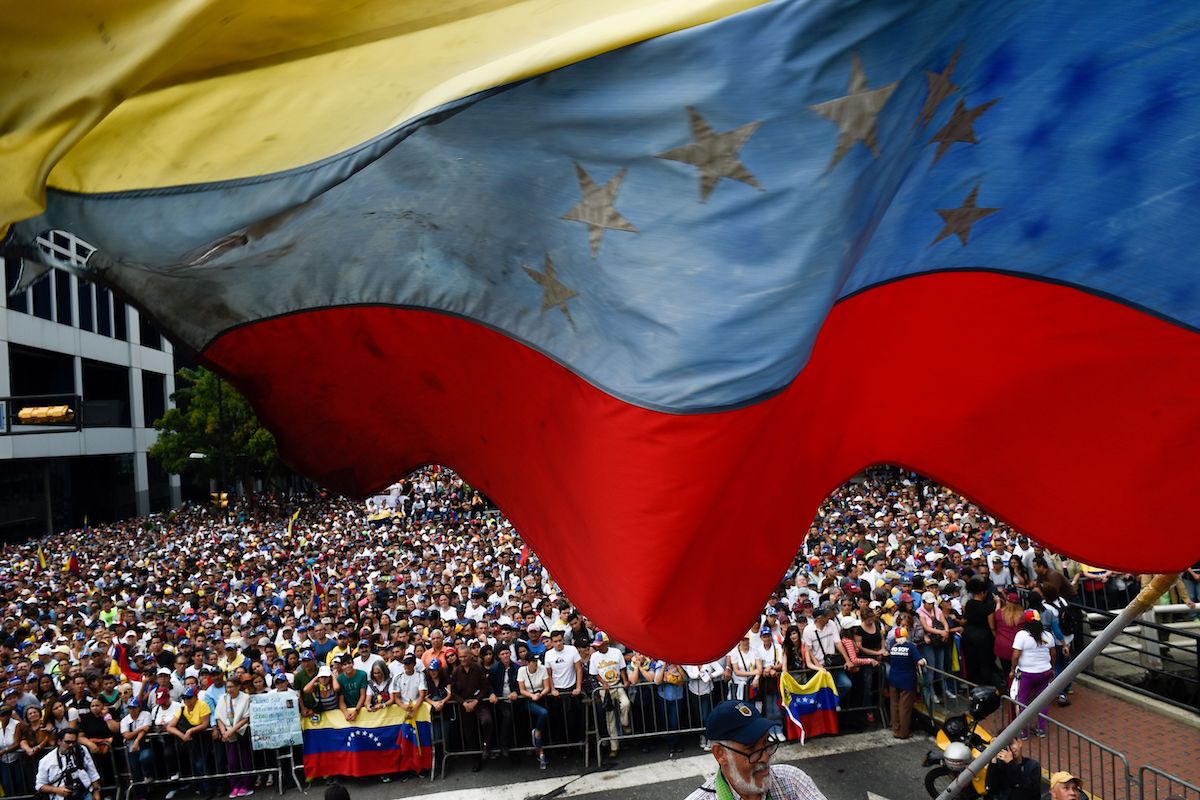 A Venezuelan national flag flutters during a mass opposition rally against President Nicolás Maduro in Caracas on January 23, 2019. (Photo by FEDERICO PARRA/AFP/Getty Images)

CARACAS — On Wednesday, there were two political rallies in Caracas. One was in the Miraflores presidential palace where President Nicolás Maduro told a crowd of government supporters about his allegations that there was an ongoing coup backed by the United States against him. Maduro also called on U.S. diplomats to leave the country within the next 72 hours, a move U.S. Secretary of State Mike Pompeo rejected.

Elected president in 2013 after the death of Hugo Chávez, the Maduro administration has gone through hyperinflation, mass migration, shortages, two periods of massive protests, international sanctions to government, and an assassination attempt, just to name a few things.

In another part of the Venezuelan capital city, a few hours earlier, opposition supporters gathered at a public square in the Chacao municipality. At the start of 2019, Juan Guaidó, the recently-named Speaker of the opposition-led National Assembly, had declared Maduro “a usurper” and called the country’s security forces to defend the Constitution by removing him.

Since then, the opposition built momentum through town hall meetings headed by National Assembly deputies in streets and public squares across the country. But it was in this Chacao public square where Guaidó proclaimed by constitutional right that he was now the president of Venezuela, shaking the country, the continent and the hemisphere.

Wednesday’s proclamation was in sharp contrast to the smaller town hall meetings organized by the opposition in rural areas outside of Caracas just a few days earlier. At one of these meetings, three lawmakers stood in the back of a parked truck, blasting traditional music in front of crowd of about 50 or 60 people. Many onlookers appeared curious but not fully involved.

“It’s Guaidó this, Guaidó that, but what about the shortages? What about the migrants? What’s the plan?” a male bystander told Latino USA during that meeting. He works as a cab driver and two of his daughters recently left to Colombia. “They call us to rally and then what?” 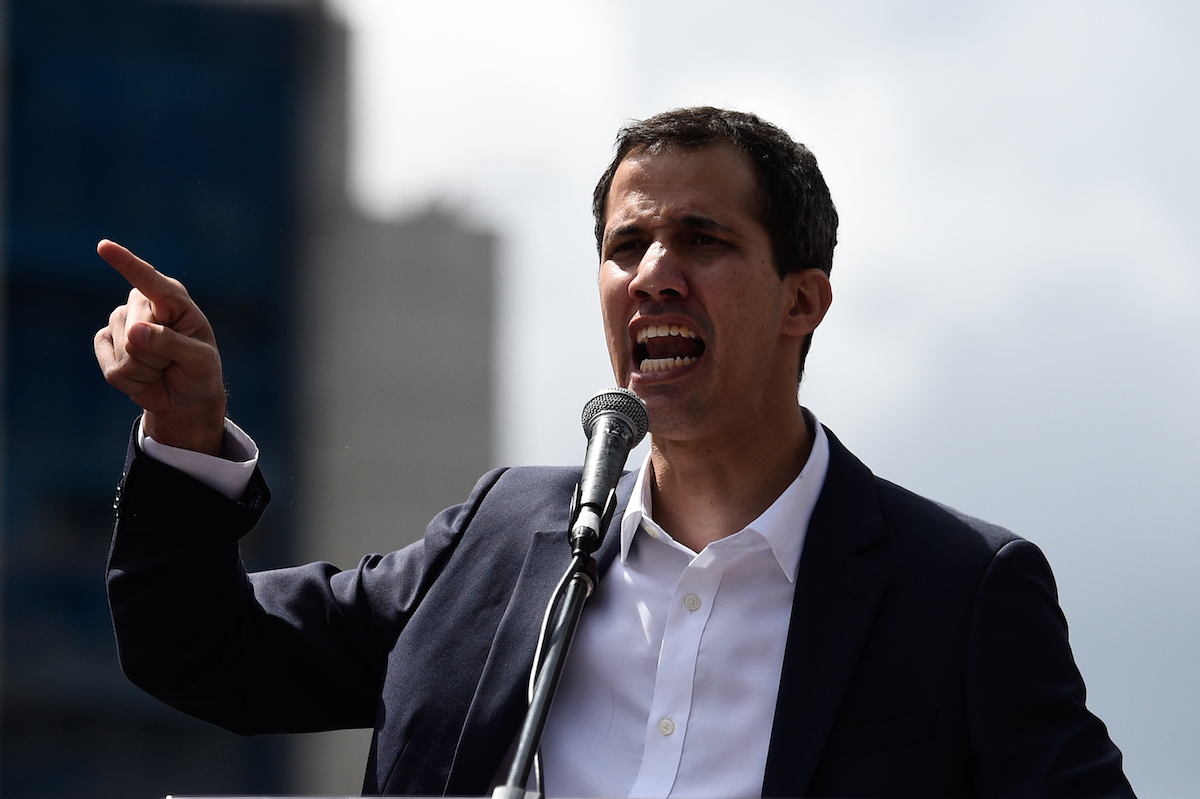 Venezuela’s National Assembly head Juan Guaidó speaks to the crowd during a mass opposition rally against leader Nicolás Maduro in which he declared himself the country’s “acting president”, on the anniversary of a 1958 uprising that overthrew a military dictatorship, in Caracas on January 23, 2019. (Photo by FEDERICO PARRA/AFP/Getty Images)

Guaidó’s constitutional claim is based on the following parts of the Venezuelan Constitution:

“We say “usurper” because Nicolás Maduro has already ended his constitutional term,” Guaidó explained in a Washington Post op-ed “a term never recognized by Venezuelans because we didn’t have an election, What took place last May 20 was a farce that our people and the world rejected. Now Maduro is a de facto ruler.”

Last year’s presidential elections on May 20 weren’t exactly controversy-free. Most opposition parties boycotted it due to irregularities in state and municipal elections, including election suspensions until further notice and relocating voters without warning.

Meanwhile, voting machine provider Smartmatic, which handled all the country’s elections for 15 years, accused Maduro’s government of tampering with the results of the National Constituent Assembly, a legislative body that became a replacement to the virtually powerless opposition-led National Assembly.

The European Union expressed concerns about the fairness of these elections, and 19 Organization of American States (OAS) members declared Maduro’s second term illegitimate. All of these nations, with the exception of Mexico, have now declared Guaidó as the rightful president, starting with the United States and Brazil.

Given the attention to Guaidó by Brazilian President Jair Bolsonaro and U.S. Vice President Mike Pence (as well as U.S. Senator Marco Rubio) these past few weeks, the events on Wednesday were unsurprising.

Meanwhile, as of Thursday morning, China, Iran, Russia, Turkey, Bolivia, Cuba, Nicaragua and Uruguay have stated their support and solidarity to Maduro and his government.

“Who is that Guaidó guy?” Maduro joked, two weeks ago, in a national broadcast. “What is he going to do with the people, with millions of chavistas, revolutionaries, and patriots?” 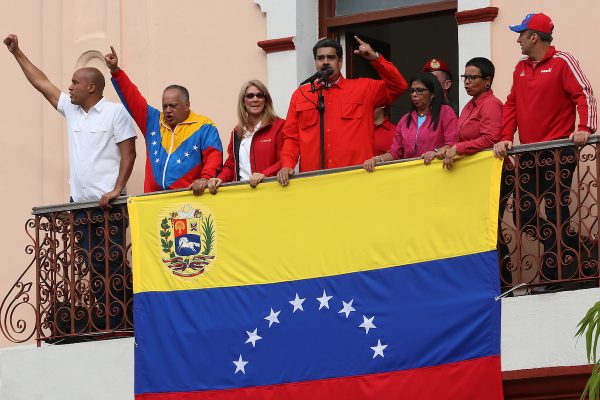 President of Venezuela Nicolás Maduro (C) waves a national flag at the Balcón del Pueblo of the Miraflores Government Palace on January 23, 2019 in Caracas, Venezuela. (Photo by Edilzón Gámez/Getty Images)

Until recently, the 35 year-old deputy from the coastal state of Vargas was not known by most Venezuelans.

“He has been in parliament since 2011. Clearly he has some experience along with his fresh face,” Jesús Guevara Rivas, a political science expert and member of the opposition party Acción Democrática (Democratic Action), told Latino USA.

As part of the Voluntad Popular (People’s Will) political party, Guaidó is perceived to be following the transitional project laid out by Leopoldo López, the Harvard-educated opposition leader who called for general protests in 2014. López is currently serving a 13-year sentence under house arrest, after spending a few years in a military prison.

As for what will happen next, Guevara Rivas told Latino USA that he is cautious. For him, these few weeks have been a surprise, though it’s hard to say what results, if any, will happen in the long run. Although Venezuela already has seen massive protests in the past, this is uncharted territory.

“What I don’t trust is the general context of the opposition and I can’t take Guaidó out of it,” Guevara Rivas noted.

José González Vargas is a Venezuelan journalist who has written for several outlets, including Latino USA, Caracas Chronicles and Into. He tweets from @Maxmordon.

2 responses to “Where Will Venezuela Go Next? The Answer Is Hard to Determine Right Now”