The Drums of War: Venezuela 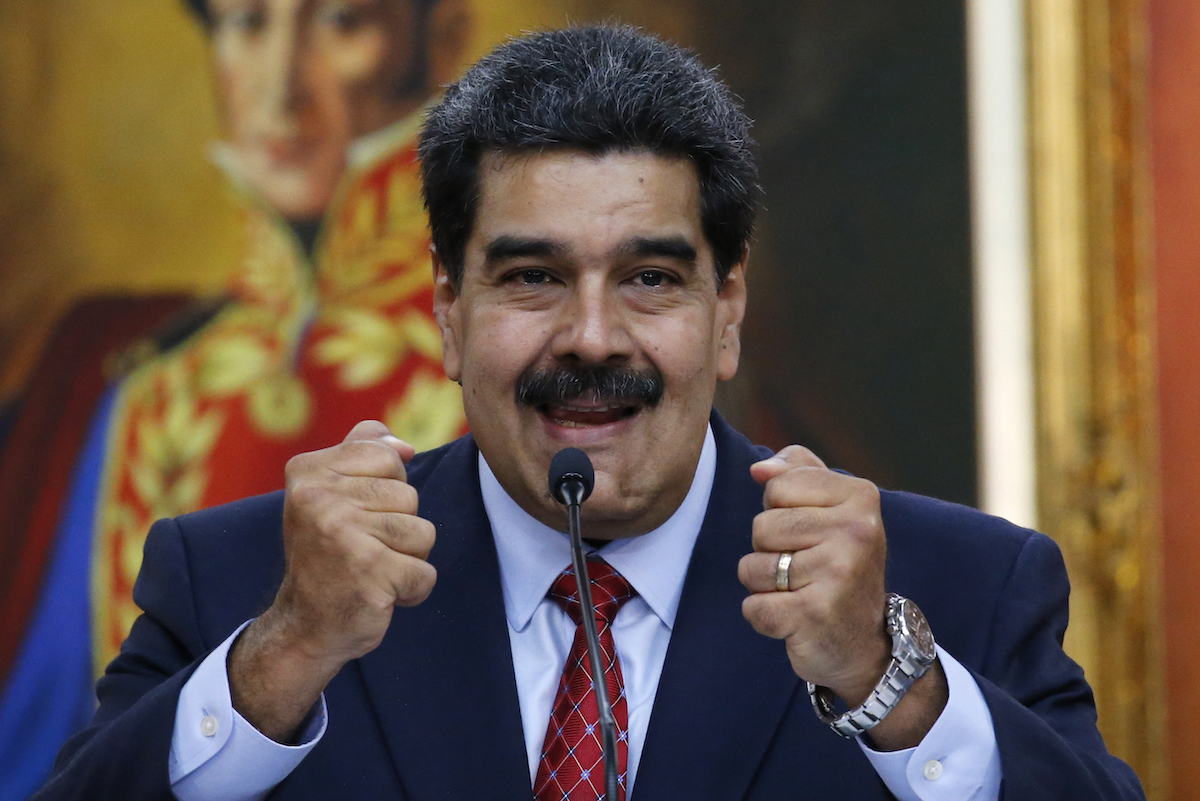 Venezuelan President Nicolas Maduro holds up his fists during a press conference at Miraflores presidential palace in Caracas, Venezuela, Friday, Jan. 25, 2019, amid a political power struggle with an opposition leader who has declared himself interim president. (AP Photo/Ariana Cubillos)

For the United States, access to Venezuela’s oil reserves has always been critical. But the failures of previous administrations to gain power over the Venezuelan economy, infrastructure, and resources —on behalf of U.S. corporate interests— has now been complicated even further by Chinese and Russian investments and influence in the region.

The U.S. government’s history of involvement in Venezuela’s politics is extensive, dating back to the discovery of oil in the country. Since then, hostility from the United States towards Venezuela (among other Latin American countries) has been quite ordinary. More recently, Hugo Chávez’s Bolivarian Revolution irked both Democrats and Republicans enough that they would eventually support a U.S-backed coup in 2002. They were largely motivated by his anti-imperialist views and Chávez’s denouncement of U.S. policies in Latin America. The coup lasted about 48 hours.

Attitudes toward Nicolás Maduro are much the same as they were towards Chavez. Albeit it with a little extra flair. The reasoning for the emphasis now is because Maduro has shifted to a more authoritarian agenda after changes to the country’s constitution consolidated his power—changes to their once-near bulletproof election system, failing to address the corruption and wealth inequality that has devastated Venezuela, and the recent “illegitimate” election leading Washington to a standoff with Maduro.

While U.S. military intervention in Venezuela is unlikely, subversive involvement in a coup or political disruption is a much more agreeable with U.S. Latin American policy. One could argue that it’s already started with additional sanctions and declarations.

“Nicolás Maduro is a dictator with no legitimate claim to power. He’s never won the presidency in a free and fair election, and he’s maintained his grip on power by imprisoning anyone who dares to oppose him,” Vice President Mike Pence has said.

Similar statements have been made by many in the Trump Administration in recent days coming after failed attempts to overthrow Maduro. Last September, the New York Times reported that the Trump administration held secret meetings with rebellious Venezuelan military officers to discuss their plans to topple Maduro. That direct coup attempt would ultimately stall due to fears of political backlash against the United States.

There is much truth to what has been said of Maduro and the humanitarian crisis in Venezuela. But the language coming from Washington doesn’t seem to be out of concern for the people. The concern for Washington seems to be access to the economic power, vital resources, and infrastructure of a nation that is largely unfriendly to U.S. interests. Despite all of Maduro’s faults, the Venezuelan people mostly share the same anti-imperialistic attitude of Maduro and Chávez. Getting passed that level of patriotism will prove the most difficult for U.S. interests on various levels.

Venezuela is much more complicated than the Trump administration perceives it to be. Their position is further complicated by a White House staff that doesn’t seem to understand the complexities of a region that includes Latin America and the Caribbean. The Obama administration, which by all accounts was much more prepared to deal with Latin America, would ultimately fail the region as well.

By continuing and expanding on Obama’s policy of isolation, hopes of a path correction by the Trump administration is all but dead. Faced with an opportunity to reverse an Obama policy that actually matters, the Trump administration missed an opportunity to right the relationship with a large economic partner. The United States cannot easily take Venezuela to task for Maduro’s brand of anti-imperialism and authoritarianism.

With the decline in Venezuelan oil exports to the United States, some would argue that the U.S. doesn’t have much to lose by sanctioning Venezuelan state-owned oil firm PDVSA. By exempting Citgo refineries in the United States from sanctions and allowing the refineries to continue to operate, the leverage that Washington gets for fuel prices shouldn’t impact everyday Americans. Similarly, the Venezuelan government relies on the United States to buy 41% of oil produced, and the U.S. is the only importer of Venezuelan oil that still pays cash (Venezuelan shipments exported to China and Russia are currently used as debt repayment measures). In addition, the U.S. is already saying that oil money should be going to Juan Guaidó, the opposition leader who declared himself interim president on January 23, and has been formally recognized by the U.S., Brazil, Canada, the European Union and other Latin American countries (although not Mexico).

This could be enough to inflict a substantial amount of economic pain on Venezuelans across the country and Maduro is already feeling that pressure. His video posted on social media that was meant to appeal to the citizens of the United States and his willingness to meet with opposition leaders can be construed as evidence of him running out of options.

But as Washington continues to isolate Venezuela and other countries as a result of Trump’s policies, those in isolation are left with no choice but to look to China, Russia and others as trade partners. These partnerships come with great benefit to other nations that foster similar anti-imperialist attitudes towards the United States. Isolating Maduro could mean isolating the U.S. from Venezuela’s resources while simultaneously inviting our enemies to set up camp in America’s backyard.

Much of the reason for the current problems in Venezuela stems from the United States slowly weaning off of Venezuelan oil. For a country whose social programs and social equity platforms are reliant on oil profits, the U.S. has purposely been tightening the noose on a nation that is not friendly to American corporate interests. It has always been the policy of the United States to create uncertainty and chaos in Latin America thus forcing those countries into bowing to U.S. pressure and inevitably granting access to economies and resources.

That is before China and Russia got in the way. The U.S. now finds itself in the precarious position of wanting to take as much action as possible against Maduro as options become more limited by the day. As Washington puts more pressure on Maduro and the people of Venezuela, American policymakers risk driving Venezuela into deepening their relationships with Russia and other partners.

Could the next move for the Trump administration be to take an approach similar to the actions the United States took in Grenada when Washington used medical students as a pretext to an invasion against the government of Maurice Bishop, who had previously been killed?

One could argue that the Grenada approach seems to already be in play after Maduro ordered the departure of United States officials from Venezuela and Secretary of State Mike Pompeo declared that Maduro does not have the legal authority to break diplomatic relations with the United States or to declare U.S. diplomats persona non grata and that U.S. officials would remain in their current positions ignoring Maduro’s demands.

Remembering what Trump said —that all options are on the table— and given that those options are increasingly limited. If the United States wants bloodshed, Washington knows how to get it done.

The Intercept: The Battle For Venezuela And Its Oil

The Associated Press: Venezuelan Soldiers on Air to Back Maduro

One response to “The Drums of War: Venezuela”