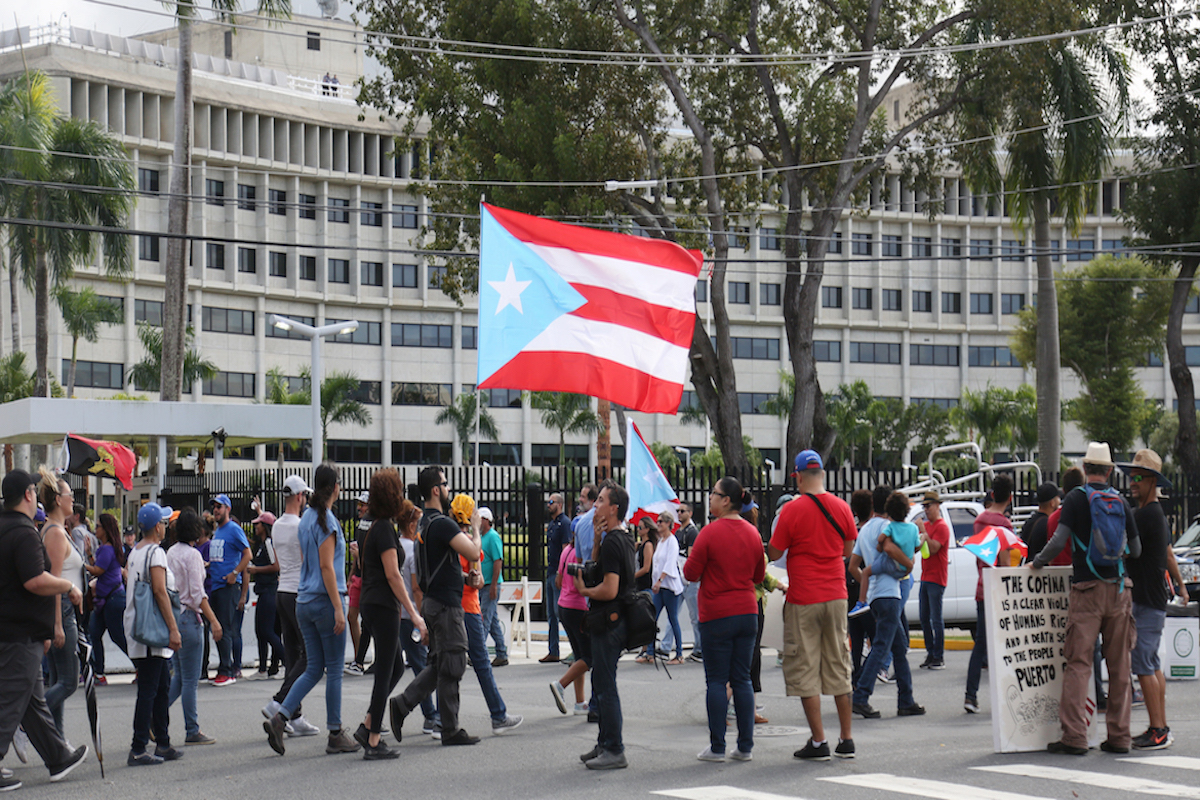 Protesters outside a San Juan federal court building, during the January hearing on Puerto Rico’s debt. (Photo by the Centro del Periodismo Investigativo)

EDITOR’S NOTE: The following statement about Puerto Rico’s debt restructuring deal was shared with the media on Tuesday. The groups who issued the statement all oppose the deal.

SAN JUAN, PUERTO RICO — Groups opposed to the COFINA adjustment plan on the island and the diaspora, including the Center for Popular Democracy, Hedge Clippers, the Puerto Rican the Citizen Front for the Debt Audit,  VAMOS, and a professor of constitutional law in San Juan (a member of the Citizen’s Commission to Audit the Debt) released the following statement following its approval by federal judge Laura Taylor Swain:

“Let’s be clear what this approval really means: The restructuring of 24% of the debt approved by judge Swain means guaranteed payments to bondholders with no benefits for the people of Puerto Rico. On the contrary, Puerto Ricans will have to pick up the tab in the form of higher sales taxes for the next 40 years and more austerity. And this is just a signal of what’s to come. This is dangerous precedent that bondholders through the Fiscal Control Board will try to push when restructuring the remainder of the debt in the coming weeks. We refuse to sit back and watch how Wall Street destroys Puerto Rico.  Expect more protests and public mobilization to resist this abuse,” said Julio López Varona, The Center for Popular Democracy (CPD).

“Judge Taylor Swain grossly misjudged the impact of approving the COFINA contract without evaluating the legitimacy of the bonds in question. This ruling is the perpetuation of Puerto Rico’s colonial status and the increased disregard for Puerto Rican lives by the U.S. Congress and U.S. Courts,” said María J. Torres-López, Diáspora en Resistencia Organizer.

“Approving this debt adjustment plan was not legally necessary or inevitable. If the board, the government and Swain had the will to do so, arguments to reject the adjustment plan of COFINA and all those who will have had and have enough. They could have said, for example, that the emissions of COFINA bonds were illegal, that they violated the Constitution of Puerto Rico, that they had to be audited before making a decision, or that the adjustment plan is unsustainable. It does not guarantee the essential services of the country and will condemn us to a future default. In fact, to argue, as Swain does, that rejecting the agreement condemned us to a litigation of ‘all or nothing,’ when in a bankruptcy, which starts from the premise that the debtor can not pay, aspire to charge ‘all’ is unreal borders on the demagogic. It is also important to point out that no one offered proof against the plan, when it was the same judge who decided not to allow the testimony —against— the only economist who appeared before the court. If they approved the plan, it is because they wanted to,” said Luis José Torres Asencio, a lawyer and professor of constitutional law and a member of the Citizen’s Commission to Audit the Debt.

“The PROMESA Law and the Fiscal Control Board are creatures of the U.S. Congress clearly favorable to bondholders and the financial sector. Judge Swain confirms this decision. But in addition, it shows the open and crudely despotic character of the colonial condition. Every decision of the federal court under PROMESA is an imposition in a theater controlled by others and in which the Puerto Rican people are not legitimately represented,” said Tato Rivera Santana, spokesperson for the Colectivo Dignidad.

“Today, more than ever, it is clear that the most important thing that happened during the evaluation of the plan was the mobilization outside the court, because from there, and not from inside, is that the conditions can be generated to reject and revert all these policies and these agreements. We need to increase and strengthen our show of force and mobilizations against the debt and resist this illegal and dehumanizing process until we grow enough so that we do not have to resist,” said Justo Méndez of Vamos–Concertación Ciudadana.