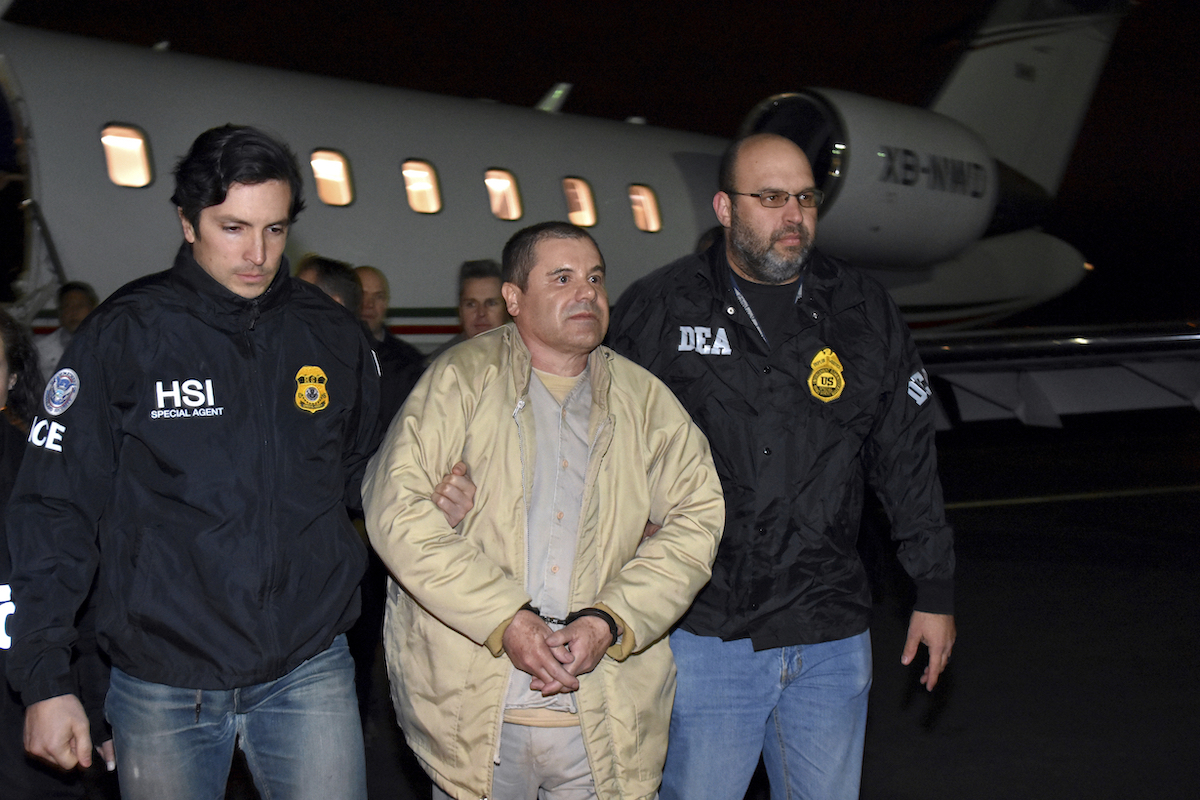 MEXICO CITY (AP) — Mexico’s powerful Sinaloa cartel marches on despite the arrest, extradition and now conviction in New York of its notorious leader, Joaquín “El Chapo” Guzmán, and the proof of this lies is in huge, multi-drug shipments detected on the border in recent weeks.

Those heaping bags of fentanyl and plastic tubs of crystal meth, heroin and cocaine offer no sign that the cartel has been weakened, lost sway over its traditional territory in northwestern Mexico or seen its international reach curtailed by the loss of its notorious leader.

The cartel still controls a worldwide web of contacts that can move Colombian cocaine to Cameroon and Mexican meth cooks to Malaysia. It also controls seaports to get drugs and precursor chemicals shipped in from around the globe; employs labs and chemists to process them; bribes corrupt cops to ensure the drugs can be moved to the border; has engineered multimillion-dollar tunnels to smuggle tons of marijuana and cocaine under the frontier; and pays “mules” to ferry shipments in cars and trucks.

That doesn’t even count the armies of hitmen and enforcers who moonlight in extortion and kidnapping, plus the money launderers, front corporations and political contacts. There’s also a world of professionals such as architects, jewelers and even musical groups, who provide entertainment and launder money.

Perhaps most important, Sinaloa continues to control what’s referred to as the “last mile” in the United States, using its wholesale distribution network to get drugs into the hands of local gangs and street dealers.

“All 23 of our divisions have an investigation at least at the local level that ties back to the Sinaloa cartel,” said Will Glaspy, a U.S. Drug Enforcement Administration agent in charge of the Houston division who has held posts along the U.S.-Mexico border from California to Texas. “Their distribution network is that well established in the United States.”

So at the cartel’s stronghold in the mountains of Sinaloa state, it’s business as usual for Ismael “El Mayo” Zambada, who has helped run the cartel since it was founded over three decades ago. He has a reputation as a level-headed, old-style capo known more for negotiating than for bloodshed.
“El Mayo is still considered the main player at the table,” Glaspy said.

A succession fight that broke out after Guzmán’s third detention, in 2016, was ultimately resolved by the arrest of Dámaso López Nuñez and his son Dámaso López Serrano, who led a rival faction. Today the cartel is seen as firmly under the command of Zambada in partnership with Guzmán’s sons Iván, Archivaldo and Alfredo, known collectively as “los Chapitos,” or “the little Chapos.”

Ismael Bojorquez, director of the Riodoce newspaper in the Sinaloa state capital of Culiacán, said the Chapitos “control street-level drug dealing, especially in Culiacán, and the defense operations, the weapons,” while “El Mayo takes care of the big deals.”

Guzmán, whose conviction Tuesday in New York likely means he will spend decades behind bars in the United States, is famous for twice pulling off brazen escapes from maximum-security prisons, earning him international notoriety perhaps rivaled only by the late Colombian drug kingpin Pablo Escobar. He is said to have a voracious appetite for luxury goods and women, marrying multiple times, including to an 18-year-old beauty queen in 2007.

Zambada has proven more elusive, simply by staying in his rural stronghold where the cartel holds sway.

If Guzmán had done like Zambada “and just stayed up in the mountains, perhaps he would still be a free man,” said Mike Vigil, former chief of international operations for the DEA. “His obsession with women created his downfall.”

Meanwhile, the new government that took charge December 1 in Mexico says it is no longer in the business of hunting down drug lords.

“We haven’t arrested capos, because that is not our main function,” President Andrés Manuel López Obrador said January 30. “The government’s main function is to guarantee public safety, and the strategy is no longer to carry out raids to capture capos.” He added, “Officially there isn’t a war anymore.”

Some in Mexico believe that authorities and even U.S. officials prefer the continued reign of a relatively stable, old-school boss like Zambada, rather than the confusion and bloodshed that might break out if he were gone.

“El Mayo remains king. He has never been captured or pursued as much” as Guzman, said author José Reveles, who writes about the cartels.

The cartel is best understood as “more of a federation of different clans than as a corporate-like structure,” Hope said.

So while the capture and trial of Guzmán “was a great moral victory for the rule of law, it did very little to have a negative impact on the Sinaloa cartel,” Vigil said.

During Guzmán’s absence, the cartel has continued to develop a highly lucrative profit-center in fentanyl. The synthetic opioid can be bought for $9,000 per kilogram in China, cut to 1 percent purity, pressed into fake OxyContin pills and marketed in the United States for nearly pure profit.
According to Ray Donovan, head of the DEA’s New York office, Guzmán was at the forefront of the fentanyl threat. As far back as the early 2010s, his cartel began spiking Mexican-produced heroin with fentanyl to boost its potency so it could compete with heroin from other regions, Donovan said.

But the cartel is not good at mixing and measuring, and the amount of fentanyl in counterfeit pills can vary from 0.03 to 1.99 milligrams per tablet—in other words, from almost none to a lethal dose.
That is probably one of the two biggest threats to the Sinaloa cartel: It’s literally killing its customers.
The other is the upstart Jalisco New Generation cartel, which has tried to stage incursions into Sinaloa territory, sparking bloody turf battles in places like Tijuana. The border city across from San Diego has become one of the world’s deadliest cities.

But, Bojorquez noted, Sinaloa has been largely able to fight off its rival.

“The drugs keep flowing,” he said, “and the business goes on.”