Amazon Pulls Out of HQ2 in NYC, Local Organizers Rejoice: ‘This Is a Critical Moment’ 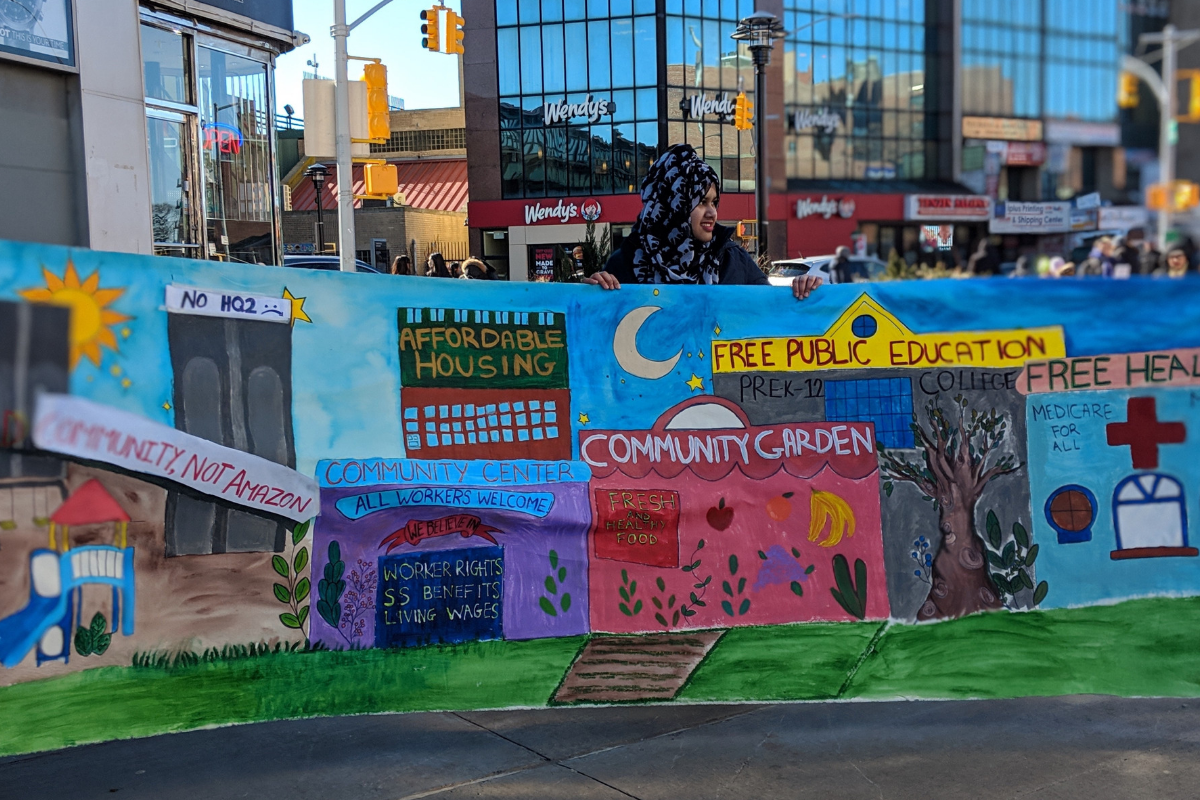 Organizers hit the streets on February 9 to stand against Amazon. (Photo courtesy of Queens Neighborhoods United.)

Last Saturday, close to 100 local organizers and activists hit the streets of Queens, New York, in an effort to advocate against Amazon’s planned headquarters in Long Island City. Less than a week later, Amazon has pulled out of the deal, in what is surely a win for community organizers.

“I think shows the city but also the world that it’s completely possible to kick huge corporations out of the city when you don’t want them,” said Josselyn Atahualpa of Queens Neighborhoods United, an organization that took a stand against Amazon.

“I think moving forward this is a critical moment for New York,” Atahualpa added. “The city and the state both showed that there is money for corporations like Amazon, while saying there’s no money for NYCHA [New York City Housing Authority], there’s no money for housing, mass transit. There’s so many that we have been asking for, and now we know there’s money so now it’s like, let’s make it happen.”

Since the deal was announced, New Yorkers decisions varied, with many strongly against the company’s move to Queens. Governor Andrew Cuomo and Mayor Bill de Blasio collaborated in the city’s negotiations with Amazon, which pledged billions in investments in return for roughly $3 billion in tax credits and grants. Many local officials, lawmakers and representatives were against it, including Congresswoman Alexandria Ocasio-Cortez.

We’ve been getting calls and outreach from Queens residents all day about this.

For Atahualpa, Amazon’s decision to back out can be inspiring for others.

“What people will forget is that this was the work of a lot of women of color from Queens,” she said. “You shouldn’t back down from a fight because it looks impossible to win.”

Latino Rebels has been following this story since the announcement. Check out our initial report breaking down the community’s reactions here:

UPDATE, 2pmET: Rep. Ocasio-Cortez tweeted about the Amazon decision to pull out of the deal:

Anything is possible: today was the day a group of dedicated, everyday New Yorkers & their neighbors defeated Amazon’s corporate greed, its worker exploitation, and the power of the richest man in the world. https://t.co/nyvm5vtH9k

.@AOC responding to criticism that by Amazon pulling out of HQ2 in Queens, 25,000 jobs were lost: "We were subsidizing those jobs."

Says if state/city was willing to "give away $3 billion for this deal," investments can be made in hiring teachers and fixing the subway.

Amanda Alcántara is the Digital Media Editor at Latino Rebels and Futuro Media Group. You can follow her at @YoSoy_Amanda.