Migrant Shelter on the Border to Close 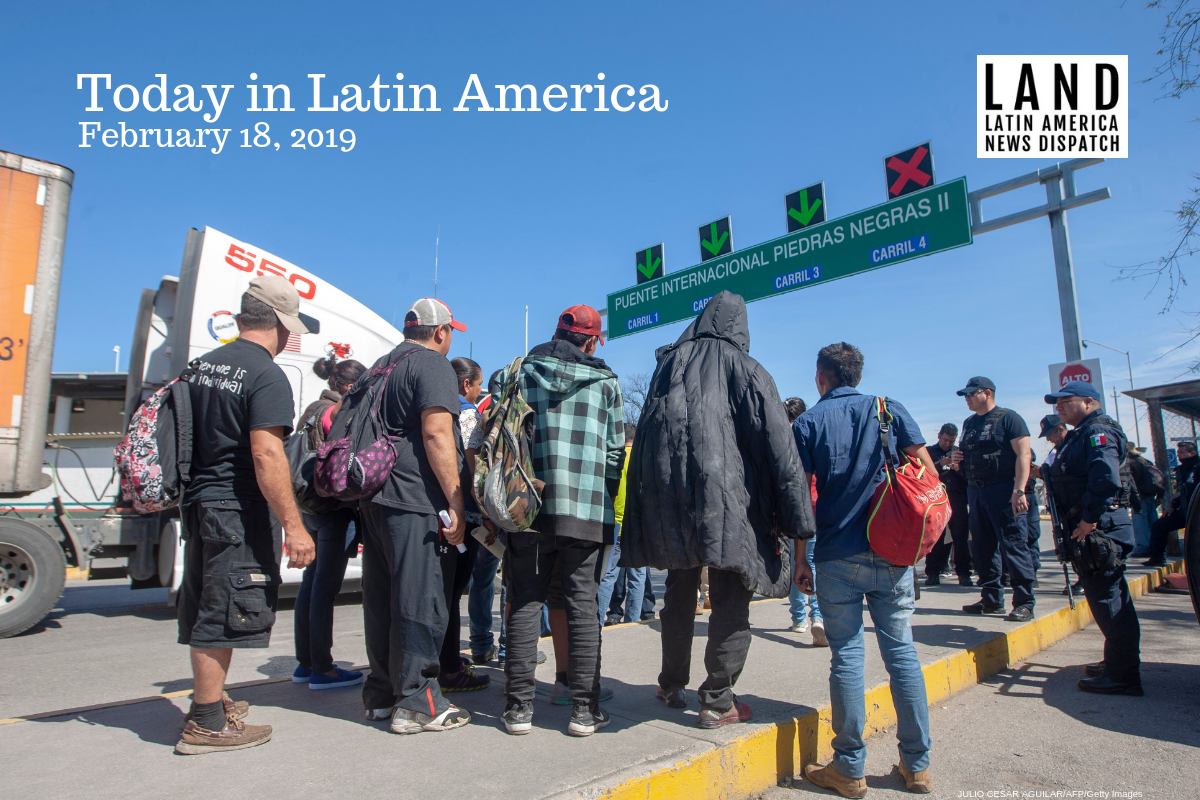 Migrants cross the International Bridge II to be interviewed by U.S. immigration authorities and have the possibility of receiving asylum, in Piedras Negras, Coahuila state, Mexico, on February 16, 2019. (Photo by JULIO CESAR AGUILAR/AFP/Getty Images)

THE U.S.-MEXICO BORDER: Mexican authorities announced on Saturday that a large makeshift migrant shelter near the U.S.-Mexico border will close this week. The shelter, located across from Eagle Pass, Texas, in the Mexican town of Piedras Negras, will likely close Wednesday because it has “served its purpose,” according to Coahuila State Public Safety Secretary José Luis Pliego. The improvised shelter is home to approximately 1,600 Central American migrants who participated in the caravans earlier in the year and are now waiting to have their status processed. However, just last Wednesday, a scuffle between migrants and Mexican riot police broke out in the shelter, showing that frustrations are mounting in the facilities.

Many Central American migrants have complained about the living conditions in the Piedras Negras shelter, located in an abandoned factory building. The shelter is guarded by police, and migrants are not allowed to leave the premises without Mexican humanitarian visas, which are not being processed as fast as in the past. U.S. Customs and Border Patrol has been stationed in the northern banks of the Rio Grande, in the Texas town of Eagle Pass. Migrants are expected to be relocated to neighboring Mexican states.

THE U.S.-MEXICO BORDER: A top White House adviser said President Donald Trump could veto measures of Congressional disapproval of his declaration of a national emergency along the U.S.-Mexico border. White House senior adviser Stephen Miller told “Fox News Sunday” that the president is “going to protect his national emergency declaration, guaranteed.” Moreover, acting Secretary of Defense Pat Shanahan said that the Pentagon is yet to determine how much funding will be disbursed to the president’s border wall project.

MEXICO: On Saturday night, gunmen opened fire in a bar located in the Mexican city of Cancún, killing five people and injuring five others. The shooting occurred in La Kuka, a bar five miles away from the city’s center. The act of violence in the state of Quintana Roo, which encompasses the popular vacation destination, has been attributed to drug cartels like Jalisco New Generation moving into the area. On January 21, seven men were killed at a house party in the tourist hotspot.

HAITI: Over the weekend, Haitians continued to protest and demanded that President Jovenel Moïse resign, blaming him for the country’s weakening economy.

This comes after Moïse refused to surrender and announced plans to quell demonstrations and converse with dissenters in his first public speech on Thursday night since protests began. The U.S. Department of State has issued a travel advisory warning in Haiti because of violence and crime. This week, 113 tourists will be evacuated from the country. In the meantime, Haitians are running short on money and clean water as barricades block main streets.

EL SALVADOR: While abortion remains illegal in El Salvador, the country’s Supreme Court overturned a 30-year sentence for homicide. After being raped by a gang member and giving birth to a stillborn in a toilet in 2016, Evelyn Beatríz Hernández Cruz, 19, was convicted last summer after prosecutors labeled her guilty of murder because she had not sought medical care. Hernández is now awaiting a new trial which will begin in April. Upon being released, Hernández was greeted by her family and human rights activists who also demanded for the release of at least 20 other incarcerated women in jail for abortion.

NICARAGUA: The Nicaraguan government has begun talks with the country’s business leaders in efforts to heal the country’s ongoing conflict, which started in the spring of 2018. The opposition, however, has set preconditions before the talks go any further. Among these are the release of over 700 “political prisoners,” freedom of the media and the elimination of pro-government militia groups. United States Ambassador to Nicaragua Kevin Sullivan expressed his optimism via Twitter and said that the U.S. “welcomes” the effort to create dialogue between the Nicaraguan government and the opposition.

The US Government welcomes this effort to reestablish negotiations between Nicaraguan Government and civil society representatives. The negotiations will require good faith efforts to achieve real solutions in real time for the Nicaraguan people. https://t.co/PnkiWjCema

Members of the Catholic Church also participated in the discussion.

VENEZUELA: On Saturday, the second shipment of humanitarian aid arrived in the Colombian border city of Cúcuta. Opposition leader Juan Guiadó, who declared himself interim president last month, said aid will enter the country on February 23 despite President Nicolás Maduro’s use of the military to block any aid from crossing the border.

In a speech to supporters in Caracas, Guaidó said he would announce plans today to overcome the blockade. U.S. Senator Marco Rubio visited Cúcuta yesterday and said that Venezuelan soldiers would commit “a crime against humanity” if they didn’t allow the aid to pass through the border.

At the border with @MarioDB & @AmbCTrujillo. Those containers behind us were put there by a terrorist, criminal regime. It isn’t going to work. Food and medicine will reach the people of #Venezuela. pic.twitter.com/mbw6QIIIAe

BRAZIL: Yesterday, demonstrators protested in cities across the country in response to the death of a young Black man who was put in a “sleep hold” by a security guard. The protesters chanted the name of Pedro Gonzaga, 19, outside the supermarket in Rio de Janeiro, where the teenager was restrained by security guard Davi Amâncio on Thursday. Gonzaga died of a heart attack in a nearby hospital soon after the incident. The hashtag #VidasNegrasImportam (“Black Lives Matter”) spread on social media in response to the death, acknowledging Gonzaga as well as the recent deaths of other unarmed Black people across the country.

ARGENTINA: On Saturday, a funeral was held for Emiliano Sala, 28, the soccer player who died in a plane crash last month over the English Channel. In the player’s hometown of Progreso, located in Santa Fe province, family and residents of the small town grieved the beloved striker, who was known in the community as “Emi.” The body of David Ibbottson, the plane’s pilot, has not been found.