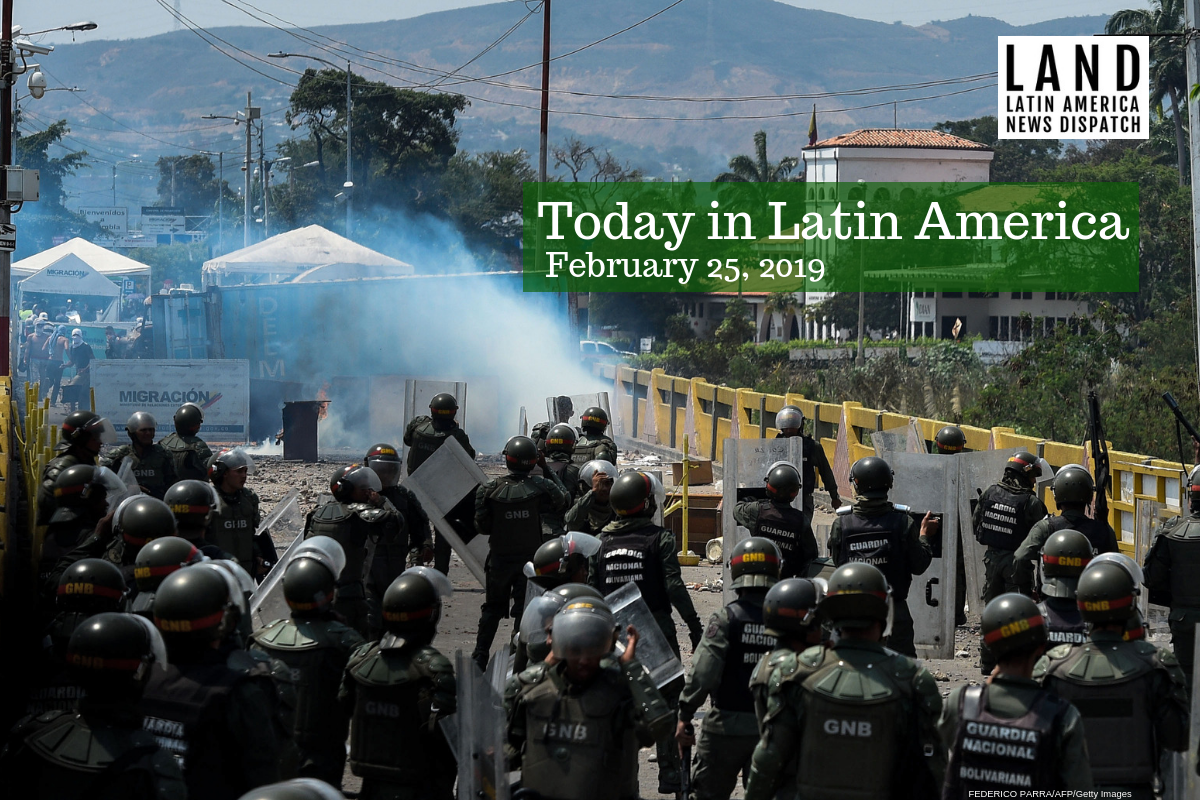 VENEZUELA: Over the weekend, border clashes between Venezuelan government forces and opposition activists resulted in four dead and hundreds injured. Starting on Friday, the Venezuelan national guard (GNB) blocked humanitarian aid from entering the country, resulting in several standoffs at the Simón Bolívar Bridge on the Colombian border. GNB fired tear gas at crowds, and at least 285 people were reportedly injured on Saturday.

In the northern Brazilian province of Roraima, two demonstrators were killed and 21 injured after Venezuelan President Nicolás Maduro closed the border with Brazil in an effort to prevent humanitarian aid coming from coming in the Santa Elena de Uarién port of entry, located in southeastern Venezuela. Following the conflicts, the governor of Roraima declared a “state of emergency.”

Yesterday, opposition leader Juan Guadió affirmed that “all options” remain open in resolving the country’s ongoing crisis. Loyalists of Maduro, who held a music festival on Friday called “Hands Off Venezuela,” increased their military rhetoric and condemned an alleged military incursion perpetrated by the United States. Although two trucks entered Venezuela, most of the humanitarian aid sent by the United States and some European Union countries remain stockpiled in warehouses at the borders with Colombia and Brazil.

UNITED STATES / MEXICO: On Friday, Mexican President Andrés Manuel Lopez Obrador said that his government will help the family of Joaquín “El Chapo” Guzmán get humanitarian visas in the United States. Guzmán’s family requested the visas in order to visit him in prison. Known as humanitarian parole, the permission is granted by the U.S. Citizenship and Immigration Services (USCIS) to “people with compelling emergencies” and is accepted on a case-by-case basis. Guzmán was found guilty on February 12 on multiple charges and now faces a life sentence.

CUBA: Yesterday, Cubans voted in a referendum to reform the country’s constitution, overwhelmingly approving the amendments suggested by the Council of Ministers. While President Miguel Díaz-Canel and his administration mounted a campaign across the country, utilizing the hashtag #YoVotoSi(“#IVoteYes”), many took to the streets and social media to voice their opposition. Although high turnout and no disturbances were reported at the polls, the government allegedly cracked down on those in the opposition camp of the referendum, detaining them and raiding their homes. Among the new amendments, the new constitution will recognize private property, expand small private businesses and establish term limits for the president. Most notably, the commission removed a proposed article to legalize same-sex marriage after widespread protests.

ST. KITTS AND NEVIS: The twin-island nation will legalize cannabis for medicinal and scientific purposes after the government accepted 13 resolutions proposed by the National Commission for Marijuana. The Commission put forth a unanimous recommendation that the criminalization of cannabis be amended and that the medical and scientific use of cannabis be allowed under a license. Other countries in the Caribbean, such as Jamaica and Trinidad and Tobago, have also moved to decriminalize cannabis.

GUATEMALA: On Friday, domestic prosecutors launched an investigation into first lady Patricia Marroquín de Morales for failing to report campaign checks during her husband President Jimmy Morales’ presidential campaign. El Periódico, a local newspaper, found that an official in Morales’ party issued four checks totaling $32,000, two of which were under Marroquín’s name, while the other two were under Morales’. Ongoing this week, the investigation will look into possible corruption in determining if the money was used for the campaign.

COLOMBIA: On Friday, city officials tore down a former residence of Pablo Escobar in Medellín, triggering 180 detonators to topple the white concrete building in the Poblado neighborhood in the south of the city. Before the demolition, Mayor of Medellín Federico Gutiérrez said, “We are paying back a historical debt with our victims.” The city is planning to build a park on the site of the smuggler’s home to memorialize the thousands of people killed during Escobar’s reign in the 1980’s.

ECUADOR/PERU: On Friday, a 7.5-magnitude earthquake hit eastern Ecuador, 71 miles southeast of the town of Palora in the Morona Santiago province, according to the U.S. Geological Survey. President Lenín Moreno said via Twitter that reports from the capital of the southern province “do not indicate major damages” to the local infrastructure.

Tremors were felt in the capital of Quito and the northern city of Guayaquil. No casualties have been reported.

ARGENTINA: As the Vatican sex abuse prevention summit convened by the clergy ended yesterday, a scandal emerged over former Argentinian bishop Gustavo Zanchetta. In 2015, a complaint to the Vatican stated that the bishop of the northern diocese of Oran possessed gay pornography of “young people” having sex on his personal phone, according to documents published by El Tribuno, a newspaper from the northwest province of Salta. Former bishop Zanchetta stayed in his Oran position until 2017, when he resigned and was given a top post in the Vatican by Pope Francis. Zanchetta is now under investigation by Argentinian and Vatican authorities after alleged victims accused the bishop of sexual abuse in late 2018.