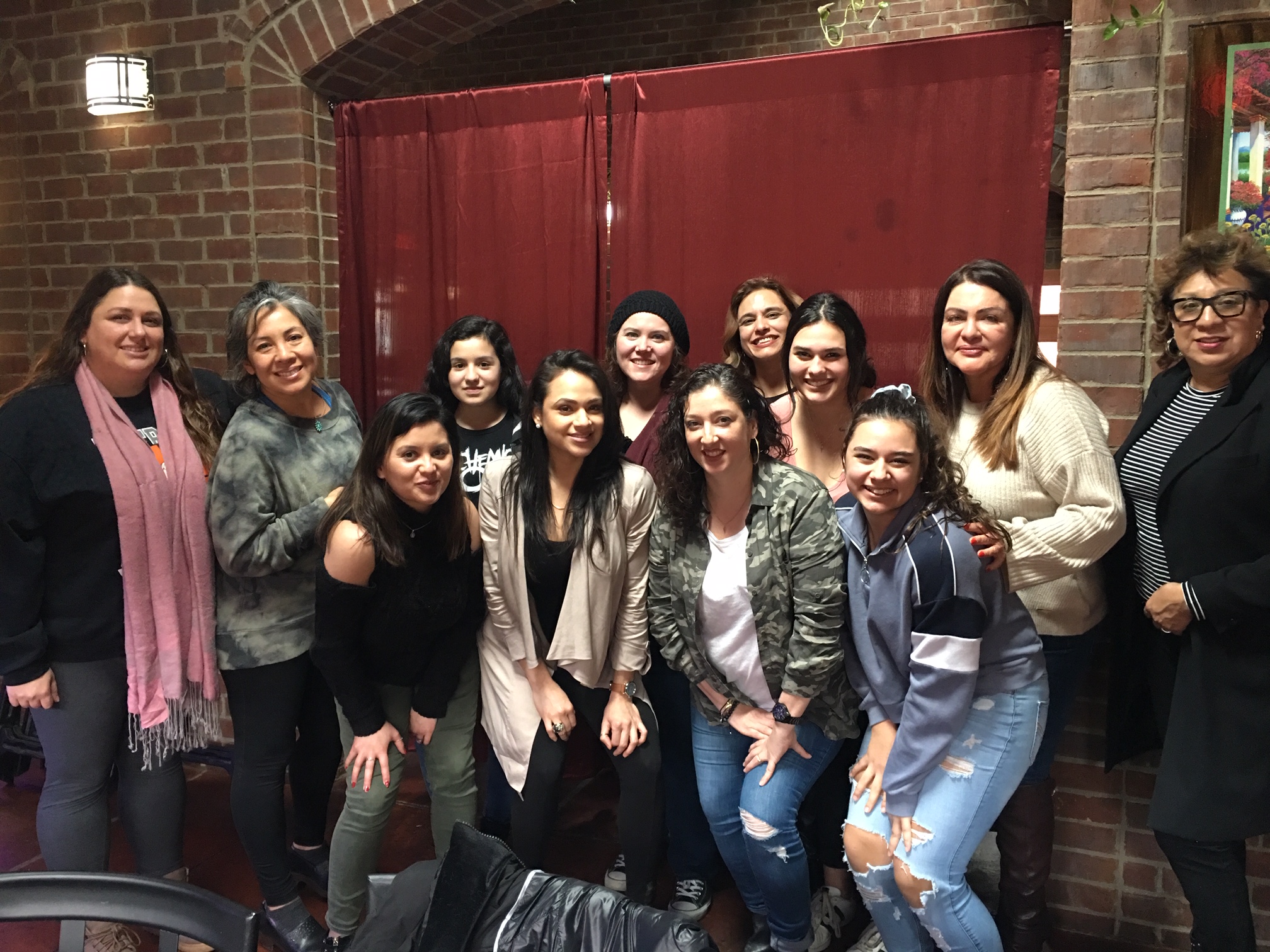 Members of the Detroit Chingonas group met for their monthly brunch on February 24, at La Noria Bistro. (Photo by Serena Maria Daniels)

DETROIT —Throughout the history of American racism, the image of Mexicans in the United States has ranged from that of the shiftless drunkard and layabout, to the criminal and hyper-sexualized.

And the imagery attached to that stereotype is usually an oversized sombrero tilted over a cartoonish mustache and dates back to the late 1800s to present-day under the Trump administration’s hate mongering anti-Latino/a Tweets.

But just as long as these types of pendejadas have been around, there, too, are groups of chingones who are fighting to put an end to it. Earlier this month, that’s what a group of Detroit Latinas did when an upcoming Cinco de Mayo bar crawl came to their attention.

The women, all members of the private “Detroit Chingonas” Facebook messenger thread, took New York-based Bar Crawl Live to task for the manner in which the company is promoting its “Tacos and Tequila” bar crawl that takes place in several U.S. cities, including in the Motor City. To promote the ticketed event, which is to include both taco eating and costume contests, organizers used images of scantily-clad white women, dressed in that stereotypical fashion with sombreros and fake black mustaches. The Detroit event is scheduled for May 4 involving a handful of bars in the city’s Greektown district.

“The struggle for representation is a very real thing,” Chingona member Raquel Garcia told Latino Rebels. “To be able to control our (narrative) is still a struggle. That’s what this is about. You don’t get to make a cartoon out of us.”

Garcia, a community organizer and immigrant rights advocate, was among several members of the group to express outrage by how the company was marginalizing Mexican culture.

“Detroit Chingonas is a really great mirror because you can say, am I wrong? And you can go into a space where people say, ‘No, you’re not wrong, you’re not alone.’”

The thread quickly migrated out of the private group, with “Chingonas” calling Bar Crawl Live organizers racist and offensive. Their comments on the company’s Facebook and Twitter pages were subsequently taken down and each user was blocked.

Within about 48 hours, Bar Crawl Live issued a response via Twitter over the criticism, saying, “It has come to our attention that our first annual Taco N’ Tequila Crawl is offensive to many cultures. Although it was not our intent to offend anyone or group, we would like to hear everyone’s thoughts on the changes we should make on our end.”

It has come to our attention that our first annual Taco N’ Tequila Crawl is offensive to many cultures. Although it was not our intent to offend anyone or group, we would like to hear everyone’s thoughts on the changes we should make on our end.

NOTE: Due to Facebook’s limited number of changes on an event page, we will review all comments and make all necessary changes at one time. Also, our marketing team is already working on a new event image.

Bar Crawl Live also issued a statement to the Metro Times, a local alt-weekly. In the statement, organizers said: “In no way, shape or form was it our intent to offend and/or target one culture with our marketing material,” but stopped short of actually apologizing for offending anyone. The statement characterized the concerns over the event as “hateful speech” that prompted others to post “harmful messages.” Latino Rebels has made several attempts to reach Bar Crawl Live, however, was denied a statement or response to our questions. This reporter was also blocked from the company’s Twitter page.

The statement also alluded to the possibility of editing out the offending imagery, though as of February 26, the photos still appear on all of the Facebook pages in the six cities where the event is supposed to take place.

Detroit City Councilwoman Raquel Castañeda-López was among those who were rebuked when she too was blocked from the company’s Twitter account after she called on other elected officials via Twitter, including Congresswoman Rashida Tlaib, to call out what she described as a racist event.

Just found out about this event and tried to reach the organizers via twitter and they already had me blocked. That is outrageous! @MsMarySheffield @stephanielily @RepRashida join us in calling out this racist event! #notinDetroit #notinmycity https://t.co/KtZ3oDyzCs

In response, Tlaib, who made headlines of her own recently for making her now infamous “impeach the motherfucker” remarks about #45, had her own words regarding the event.

This is some racist bullshit (yep I cursed again…get over it!) right here. Who is sponsoring it? @onemichigan can help organize some of us to call it out. Our kids and families can’t be exposed to these types of disgusting events. https://t.co/z2ab8GyLar

“I just thought the images were really offensive,” she said. “Unfortunately, these images portray Mexicans as drunkards or prone to violence. These racist and derogatory messages are harmful to our country.”

That this uproar took place in Detroit is no mistake. After all, the Motor City, the birthplace of the Labor Movement, has long been at the center of the country’s fight for civil rights.

The largest share of Mexicans and Mexican-Americans in Michigan live on Detroit’s Southwest side, commonly known as Mexicantown. The Pew Research Center ranks Michigan No. 20 in total Hispanic population, with 2014 estimates at 477,000. Though the population is much smaller than other states, Michigan’s long history in manufacturing and agriculture has resulted in generations of Mexicans being drawn to the Mitten State for economic opportunity. In fact, when other parts of Detroit were bleeding residents in the 90s and 2000s, Mexicantown continued to experience growth.

The area is adjacent to the Ambassador Bridge that connects the Motor City with Canada. Southwest’s immigrant population is thus routinely targeted by Border Patrol and ICE enforcement. The neighborhood is also contending with the threat of gentrification as real estate values in Detroit are beginning to mirror those of other major cities and leaving longtime residents worried about being pushed out of their own community.

It’s these sorts of challenges that members of the Chingona group has been tackling for years, if not decades. The group is made up of Detroit-area women, mostly Mexicana or Chicana, who range from 20-somethings to their 60s. The members come from various professional backgrounds and political leanings. They hold monthly brunches and use the messenger thread to let each other know about upcoming events or opportunities (editor’s note, this reporter is also a member of the thread).

At the most recent brunch held February 24, the bar crawl debacle came up again and members started talking about how they can learn how this incident can be used as a tool for encouraging others to speak out against offensive depictions of the culture.

Luz Meza founded the group just a few months ago and already includes more than 50 members.

“I decided to start the Chingona group after a few conversations with some of the OG chingonas because I felt that there was so much to learn from some of the people who have been doing some of the most important work in our ‘hood and so much to teach the young girls coming after us. I had so many conversations that were ending in ‘Let’s grab coffee sometime’ or ‘You should meet (insert name of another chingona),’” Meza told Latino Rebels. “I wanted to create that space where we came together to support each other, but also talk about how we continue to support our community.”

Meza says the group has exceeded her expectations by a lot. With each brunch, she sees new faces and there’s already talk about establishing a mentorship program to inspire the next generation, which the group dubs “chingonas-in-training.”

“This group is still an example of how bad-ass/chingonas Latina women are and how much we care for our community and that goes unnoticed far too often,” Meza added.

Serena Maria Daniels is an award-winning journalist based in Detroit, reporting at the intersection of identity, politics and economic justice. She tweets from @serenamaria36.