After CBP Confusion, NYC Public School Rallies in Support of Its Immigrant Community 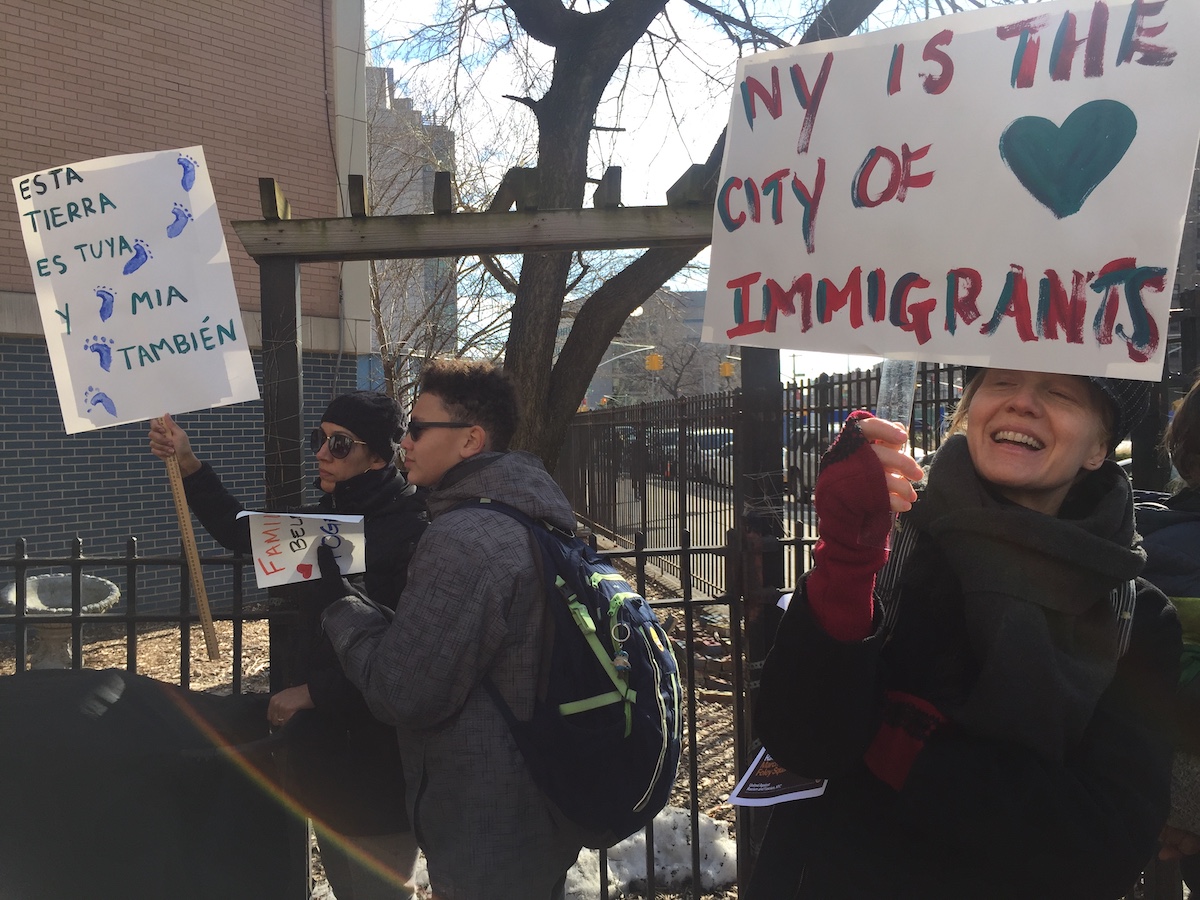 WASHINGTON HEIGHTS, NYC — A few days after U.S. Customs and Border Protection (CBP) officers instilled confusion and fear among immigrant families by parking an official vehicle outside a Manhattan public school in a predominantly Dominican neighborhood, the school’s community organized a #FamiliesBelongTogether rally on Tuesday.

For about an hour, around a hundred people gathered after dismissal at the Castle Bridge’s school entrance on 169th St. and St. Nicholas Ave. to send the message to government authorities that a threat to one was a threat to all. The group also shared a message of solidarity to Washington Heights’ immigrant community they were not alone. 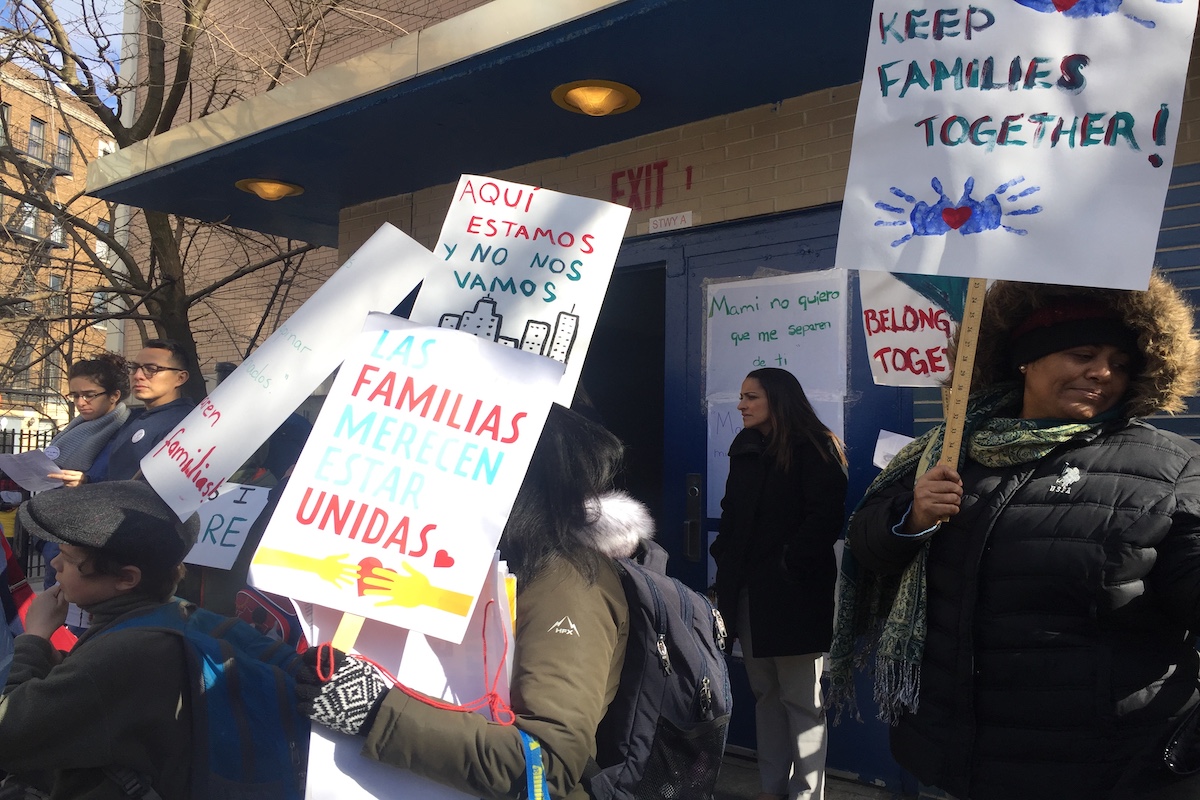 They also informed that some parents were coming up with a plan in case an emergency face-off with CBP or U.S. Immigration and Customs Enforcement (ICE).

Last Thursday, somebody snapped a photo of the CBP pickup truck when it parked on the sidewalk right in front of the school’s entrance. The officer parked and then got lunch with another officer at a pub across the street from the school. They allegedly ordered a burger and a chicken pot pie, and then drove off. But to families, immigrant rights groups and school authorities, their presence was a clear act of intimidation.

Castle Bridge School principal Julie Zuckerman said no family should feel threatened by going to the school, and that everyone was welcome there.

“The mayor has made it clear that federal agents are not allowed in or around our school,” she told a clustered group of adults and children. “The New York City Police and School Safety are fully behind us on this.”

Zuckerman started by clarifying that the federal agents had not parked at the school, but rather right in front.

“I just have to say that. That’s for me. I have to make my own interpretation. Welcome everybody,” she said.

Federal agents, including immigration and customs officers, are not allowed into schools under most circumstances, according to the New York City Department of Education. City authorities are also not allowed to track immigration status of students or family members “unless absolutely required to by law.”

The rally started little after 3pm, at the end of the school day. When the doors opened, fathers and mothers went in to scoop their children out of the school, whose makeup is two-thirds Latino and 30 percent English-speakers. Some stayed around, but most left, after buying an ice-cream cone from the Ecuadorean vendor on the street. The vendor wasn’t around the day the CBP officers appeared. It was still too cold last week for ice cream weather, she said. 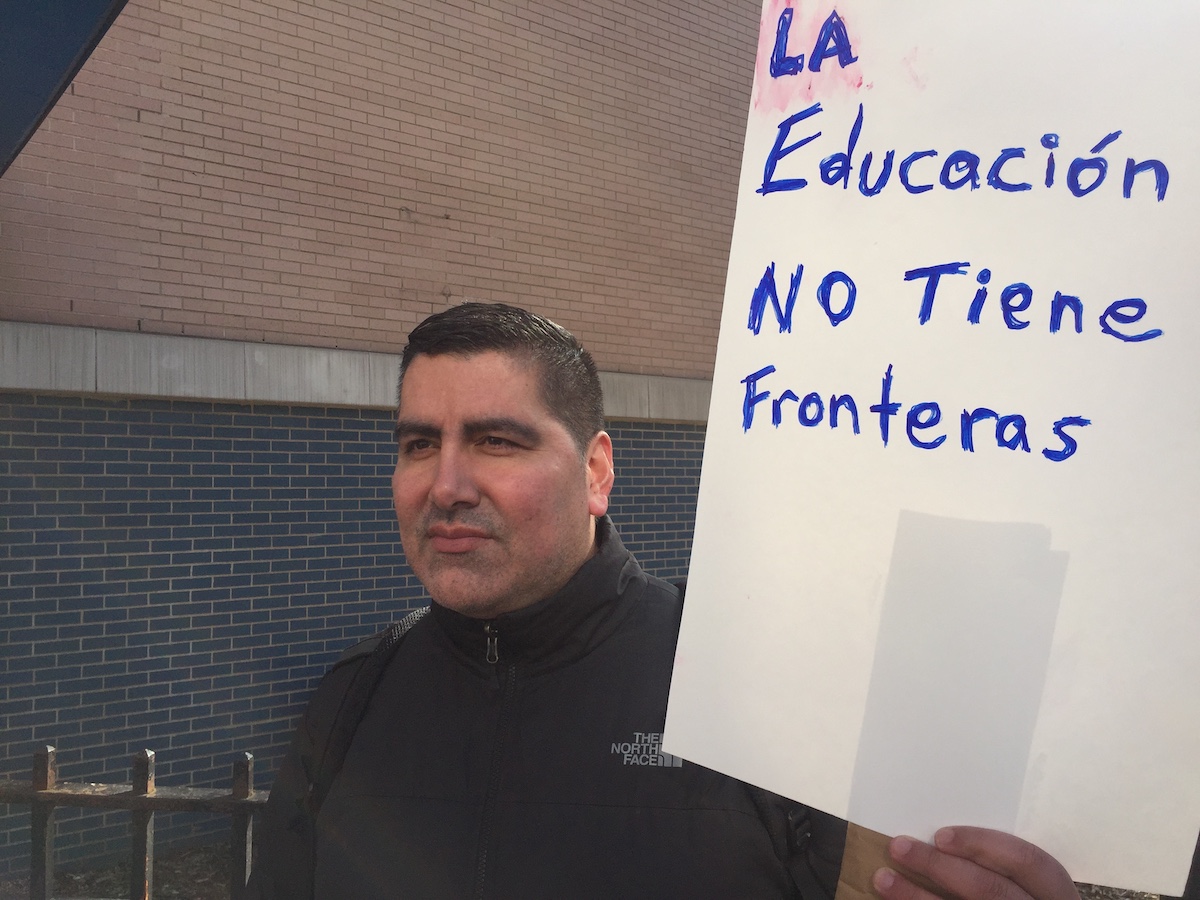 Around the corner, another candy and toys vendor, a Mexican man who has lived for more than 20 years in the city, said he was there when the CBP vehicle parked in front of the school, instilling fear. It was the first time he remembered something like that happening. He didn’t seem too concerned though. For over 20 years he had never had any issues with the law.

“Can you imagine what would happen if they came for us? They would need an entire bus to pick us up,” he told Latino Rebels.

But back at the school, the emotional tone was different. Castle Bridge’s entrance had signs in both Spanish and English reading, “No human being is illegal,” “No one is illegal in stolen land!” or “Brown people have families too!” Zuckerman had a guitar with a rainbow-colored strap, and she strummed it as everybody sang “This Land is Your Land/Ésta es tu tierra” and other heartfelt songs.

Omar Freilla is one of the rally organizers and has children enrolled in Castle Bridge. For him, and others reunited, the CBP officers came to send a message that immigrants were not welcome.

“We do belong here,” Freilla told Latino Rebels. “And what I mean by ‘we’ is that whether you are documented or undocumented. We are one community and as that sign over there says, an injury to one is an injury to all.”

Since the event lacked a megaphone, the organizers had asked everybody to repeat the words after a person spoke up. As a result the event acquired ritualistic undertones, and the street became an echo chamber where any uttered word ended up reverberating all over.

The organizers asked the kids if they had anything to say. Some were shy, other were a little more bold. “We are all one big microphone for you,” Freilla said, spreading his arms. “This is the biggest microphone you will ever see.” 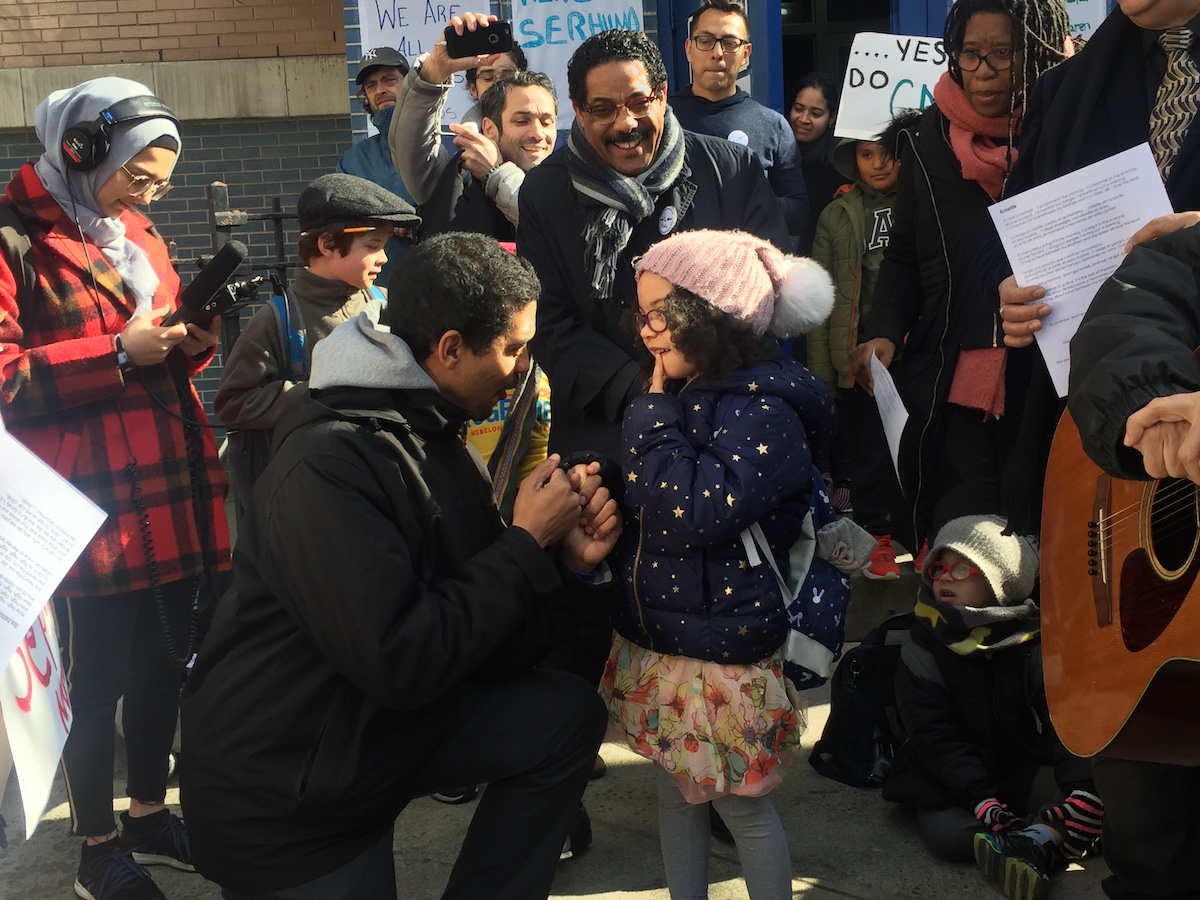 Everybody repeated after Olivia.

Another first grader, a boy named Albert, wanted to speak but felt very shy. So Freilla walked next to him and got on one knee to listen to Albert’s three words: “Yo tengo miedo” (I am scared). 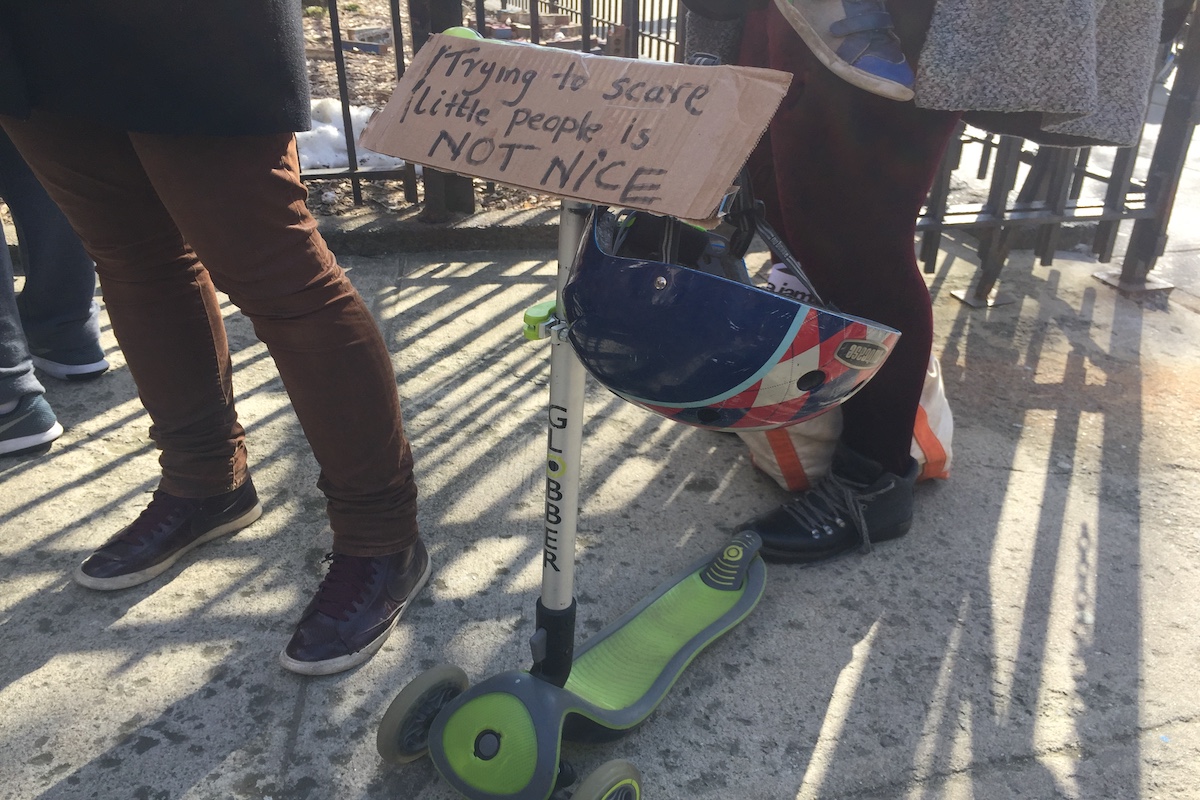