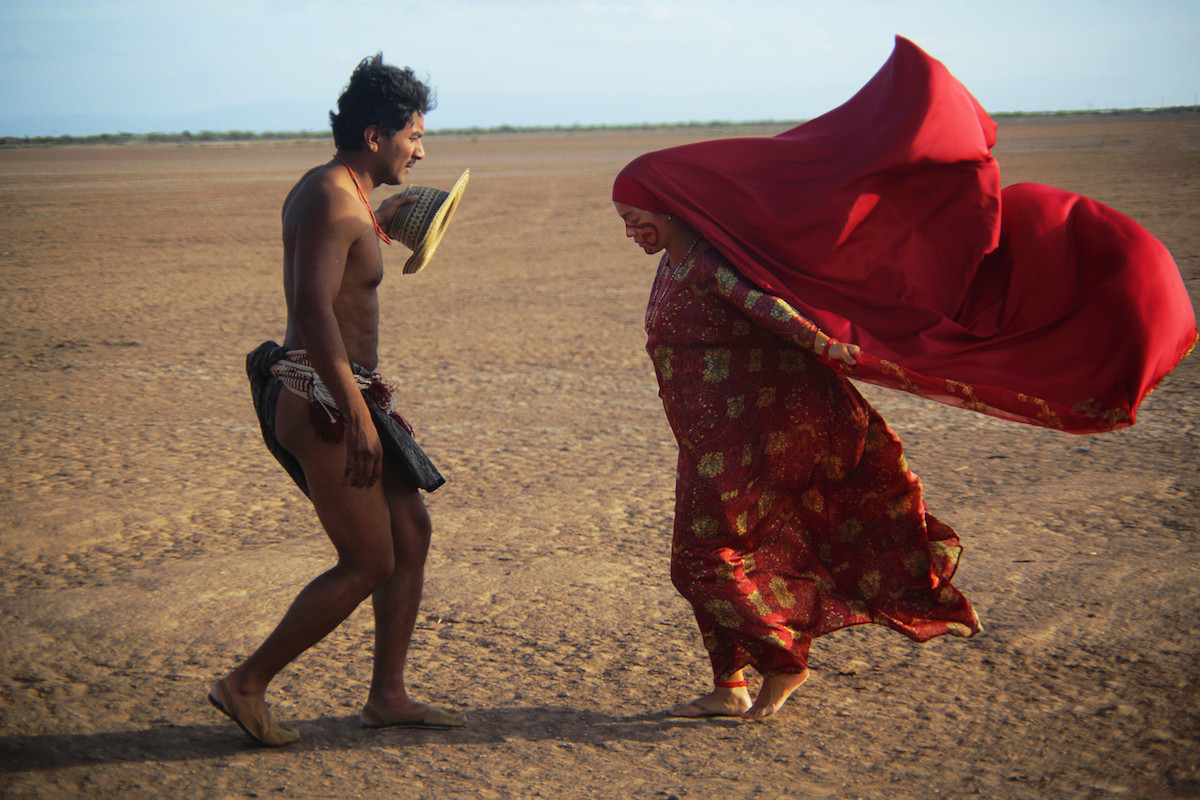 (L-R) – José Acosta and Natalia Reyes in Birds of Passage

By Aimar Arizmendi and Jacquelyn Kovarik

This article was originally published in NACLA. Read the original article here.

At first glance, “Birds of Passage” (“Pájaros de verano”) promises a tale plenty familiar to U.S. audiences: a violent and sweeping dramatization of the Colombian drug trade. Familiar ingredients are present: a narco family at war, unflinching violence and murder, and lots of marijuana. But mere minutes into the film, this promise of the familiar drug crime thriller is shattered: from scene to scene, Cristina Gallego and Ciro Guerra’s film forces the audience to witness the rise and fall of the pre-Escobar Colombian marijuana drug trade as it has never been told before: from the Indigenous Wayuu perspective. As Hollywood and Netflix continue to perpetuate narratives of the Colombian drug trade that elide or completely ignore the Indigenous narrative, and as the Trump administration and Iván Duque continue to push for failed supply-side drug war policies in Colombia, “Birds of Passage” weaves a story of the Colombian marijuana drug trade that centers Indigenous actors, Indigenous languages and ecologies of knowledge.

Equal parts crime saga and ethnography, “Birds of Passage” follows one Wayuu family in the Guajira peninsula on Colombia’s northern Caribbean coast, near the Venezuelan border. The film is divided into five jayeechi, a traditional song of the Wayuu and its established form of transmission of history and knowledge. Each chapter of the movie is punctuated by a jayeechi song, sung by a blind herder, functioning not unlike the chorus in Greek tragedies. Therefore, this is a story not only told in the Wayuu perspective, and not only in the Wayuu language, but also framed in traditional Wayuu storytelling methods and memory. “I have sung to bid the dead farewell and to remember the wars,” the narrator introduces himself in the opening scene.

To be sure, the roles of Colombians in other regions cannot be ignored when discussing the country’s marijuana boom, and some have questioned the motivations behind focusing solely on the Wayuus. In the online magazine Universo Centro, historian Lina Britto critiques this focus, because the Wayuus were in fact not central to the bonanza marimbera. Portraying them as central actors who were business partners with gringos and who benefited economically from the trade is an unlikely stretch at best, if not downright Indigenous exotification in the name of dazzling cinema, Britto asserts. Has the Wayuu-centered story of the Colombia marijuana trade never been told before because of erasure, or because that story doesn’t exist?

The hand in this opening scene belongs to Zaida (Natalia Reyes), a Wayuu girl who is at the end of a year of pre-marital confinement. The scene also features Úrsula (Carmiña Martínez), her mother and the uncompromising clan matriarch. The community has gathered to celebrate Zaida’s reemergence in a scene remarkable for its exceptional visual beauty and scrupulous depiction of the Wayuu chichamaya ritual.

Enter Rapayet (José Acosta), a mysterious, good-natured, and taciturn prodigal son of sorts, a Wayuu from a family of warriors who died in an unexplained conflict forcing him to survive among the alijuna, the term Wayuus use to refer to outsiders, literally meaning “the one who damages.” Rapayet successfully dances the traditional yonna with Zaida, afterward whispering to her, “you are my woman.” Smooth as he may seem in this opening scene, Rapayet is poor and unversed in the intricacies of Wayuu courting traditions. As a gift he offers her a tumanecklace, which is a disrespectful and inappropriate gesture met with scorn and disdain in the Wayuu community. The power and gravity of the Wayuu honor code is a theme that will reoccur throughout the film, and is perhaps more a dramatic creation of Gallego and Guerra than an accurate depiction of Wayuu political and social life.

“You should have brought a goat,” explains his father’s cousin, the respected word messenger Peregrino (José Vicente Cotes). Word messengers are the elders of the Wayuu community who serve as poet-interlocutors between the clans, sacred keepers of the word, and final authorities on the will of the spirits. It is in this role that Peregrino negotiates on behalf of Rapayet for Zaida’s hand in marriage. The community, especially Zaida’s mother Úrsula, is suspicious of a cultural outsider like Rapayet, though he becomes financially successful and though his clan was once widely respected. In this rigid world of Wayuu omens and prophesies —a world that perhaps exaggerates Wayuu customs and moral codes to the point of exotification— Úrsula’s wariness proves warranted.

Rapayet runs a modest liquor and coffee trading operation with his friend Moisés (Jhon Narváez). Moisés is often drunk, covets fashionable clothing and material possessions, and lusts after women: he is a symbol of alijuna corruption and decadence. A chance meeting at a roadside cafe between the two friends and a young couple from the United States, Peace Corps volunteers there ostensibly to help counter the growing influence of communism in Colombia, opens the door for Rapayet to procure a dowry and provides the first opportunity for the growing drug trade on Wayuu land.

The couple —who first appear in the film walking with a group of Indigenous children as an idyllic snapshot of white, western altruism— are looking to buy marijuana, and as much of it as possible. Rapayet makes a quick decision to reinvest his coffee profits into growing marijuana to sell to the gringos at an exponentially higher price. In a moment seeping with backhanded bite, seconds after the two Peace Corps volunteers hand out little cards that read “Say No to Communism!”, Rapayet turns to Moisés and says, “Long live capitalism, my friend!”

The exchange of goods —and how the introduction of massive amounts of money converts everything into a currency that can be traded and upend the inherent value of anything— permeates the film. All the characters are assiduous negotiators. A car is gifted as a trade-off for becoming the godfather of a child, someone atones a murder by charging 50 more pesos per kilo of marijuana. As Rapayet becomes more successful and his family grows, the scenery changes. They still live in the desert, but in a large modern house, with gilt tea sets, high-backed European chairs, and feather pillows. Gone are the patterned fabrics and hammocks under thatched roofs, the slung woven purses and straw hats. It does not look like progress, it looks like emptiness, their house an uncomfortable blight on the desert landscape.

In her critique of the film, Britto points out that while this plot of intense wealth accumulation within the Wayuu family makes for breathtaking cinema, the likelihood of a Wayuu family transforming into decadent capos during the bonanza was slim to none. “This is to say, the geography, the history, and the culture of the Wayuus served as colorful locations and exuberant narrative devices, as a means of injecting the exotic into what would otherwise have been a simple movie of gangsters, honor, and revenge,” she writes. The merits of showcasing the rise and fall of a Wayuu narco family fall into question when such a depiction is not grounded in historical reality.

There comes a point when the characters themselves seem to convert into a macabre currency, who trade one for another in pursuit of increased returns. As Rapayet’s family moves up in the drug trade, surrounding friends, family members, and business partners are traded for crops, airplanes, cars, and luxurious homes in the desert. When a drug runner working with Rapayet is murdered, vengeance is paid with the killing of Rapayet’s cousin, which the Wayuu spirits demand must be compensated with the blood of Moisés. Some transgressors are not even deemed the cost of a bullet to shoot.

Starting with Rapayet’ and Moisés’ entrepreneurial handshake that sunny afternoon in the Guajira, Gallego and Guerra present a parable of the origin story of the marijuana drug trade in Colombia, the aftershocks of which are still very much alive today. The commodity-driven neo-colonization of Colombia can be traced back much further than the 1960’s marijuana trade, of course: we can draw a line from today, through narcotrafficking, coffee, bananas, cacao, beyond the Colombian declaration of independence in 1810, and back to the 16th century when the Spanish erected their first colonies to extract gold from tombs of the Sinu tribe. The case of emerald extraction in Colombia is particularly emblematic. While emeralds were marketed as coming from Egypt or Asia, they often came from Colombia, extracted through the enslavement and slaughter of Indigenous communities, as the work of Kris Lane details.

By retelling the history of the Colombian marijuana drug trade through the experiences of one Wayuu family, Gallego and Guerra seek to defetishize marijuana and bring voice to the Indigenous narrative therein. But when looking to the history behind the film, it seems that there are problems in the way this narrative is constructed.

The film’s focus on Indigenous issues follows in the footsteps of Guerra’s 2015 wildly successful “El abrazo de la serpiente” (“Embrace of the Serpent“, 2016), the first Colombian film ever to be nominated for an Academy Award. In this epic film based on the travel diaries of two ethnobotanists on the hunt for ayahuasca in the Colombian Amazon, Guerra tells another compelling story of the effects of cultural contact between global northwesterners and Indigenous communities, and one that is careful to confront inherent complexities and contradictions and explore them. Unfortunately, this complexity is not replicated in “Birds of Passage.”

And in comparison to “The Embrace of the Serpent”, in “Birds of Passage” the global north invaders appear briefly and are dispensed with quickly—perhaps too quickly, considering how minimal the role of Wayuu communities was during this boom compared to the gringo shareholders and their alijunas business partners. However, though the appearance of westerners is fleeting, what they leave behind is the central tension of the film, which lies at the crossroads between the structures of global extractive capitalism and Colombian Indigenous lifeways.

The North American Congress on Latin America (NACLA) is an independent, nonprofit organization founded in 1966 that works toward a world in which the nations and peoples of Latin America and the Caribbean are free from oppression and injustice, and enjoy a relationship with the United States based on mutual respect, free from economic and political subordination. Twitter: @NACLA.