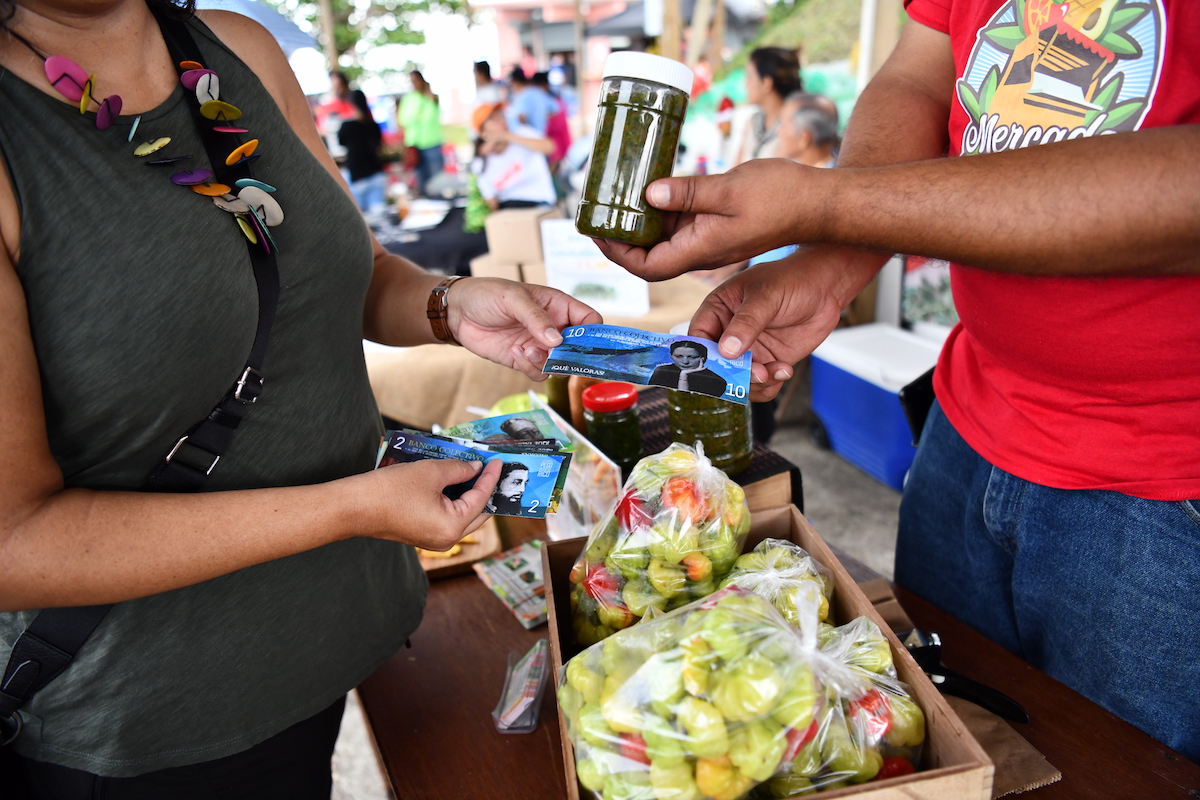 Exchange with pesos in Humacao (Courtesy of VALOR Y CAMBIO)

In the midst of a massive debt crisis, PROMESA, COFINA, and the violence against women crisis, two Puerto Rican women organized VALOR Y CAMBIO (Value and Change), a socio-economic program based on community currency.

Puerto Rican artists and scholars Dr. Frances Negrón-Muntaner and Sarabel Santos Negrón launched the project in early February to research what Puerto Ricans value the most and how the economy can respond to their needs of people on the island. The project enables a practice of a just economy, based on exchange rather than profit or accumulation. In return for each participant’s story, the artists provided a bill (or “peso”) that told a story about a person, family or community. To access the story, each peso had a QR code that led participants to a web page telling that story. With small business owners, the exchange was a commitment to promoting their business by accepting the community currency. 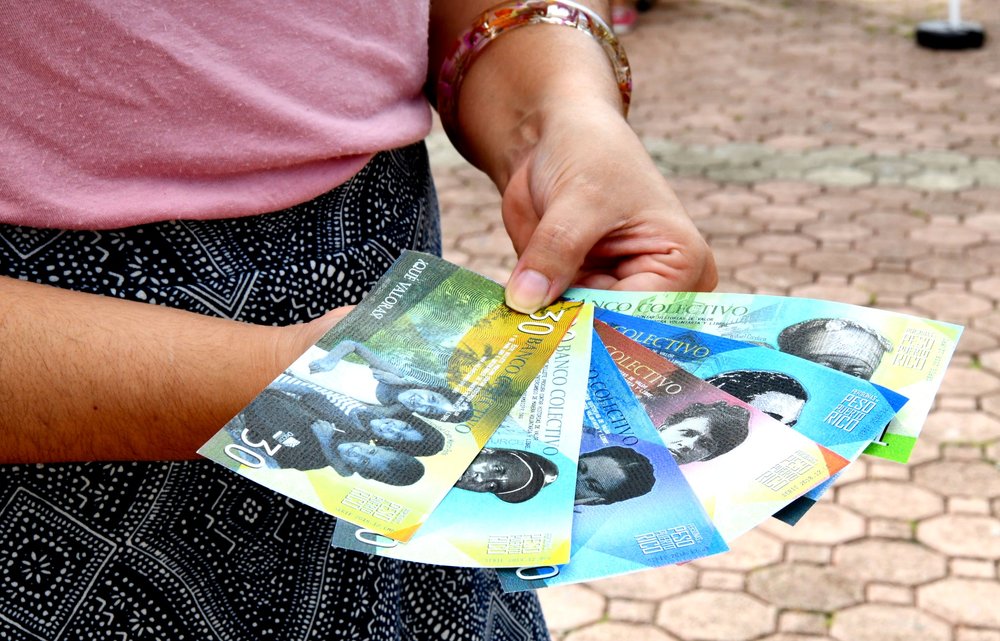 With these historical Puerto Rican legends on the pesos, some businesses even enjoyed more customers, according to the project co-creators. Alejandro Cotté Morales of Proyecto Enlace del Caño Martín Peña  observed that some participants “used the currency to purchase vegetables and artisan creations as part of the Mercado AgroArtesanal de Barrio Obrero. However, many preferred to keep the currency as a keepsake. The emotional value prevailed. Having Puerto Rican figures printed as a symbol of national currency empowers our work. It gave us pride of our identity despite of our political divisions.”

“I met a girl proudly saying, ‘My coffee and my lunch was paid by Julia!’ Another guy was multiple times in line at different places just to finish a collection, he told me, ‘I’m waiting for my Clemente!’ Without a doubt it brings emotional joy to people, they feel that this is something that belongs to them, that they can relate to, and that they are part of something bigger,” library owner Eliot Santos told Latino Rebels.

“I believe currency is the ultimate form of sovereignty,” Yareli Manning of the Miramar Food Truck Park said.

“To have money of our own will give us the identity as Puerto Ricans that the political status of being a colony has taken from us,” Deaverdura owner Virna Brull noted.

Gathering the personal stories on camera for a future documentary about this project, Negrón-Muntaner explained the following: “I heard and witnessed many moving and telling moments. In Humacao, most of the young people I asked what did they value, said ‘comida.’ This was a region that was heavily affected by Hurricane María and does not have food security. A young woman there also said she loved the project because it was the first time that she felt someone valued what she had to say. In Bayamón, a young Afro-Puerto Rican man broke down in tears after he received the ‘one peso’ bill featuring the Corderos, a family of black educators in Puerto Rico who founded early public schools for girls and black children. When I asked him why he was crying, he said that he rarely saw himself represented as a black man. I was also impressed by an older woman who shared our analysis of why an exchange economy was the best economy for Puerto Rico: when dollars are involved, someone always gets hurt.”

“I was also impressed that each day, young people came to participate,” Negrón-Muntaner added. “Sometimes they came on assignment by a teacher, and most often they were the ones that dragged their parents to the project. I noticed that young people were often the most eloquent on the importance of a just and equitable society. To accelerate change, one of the most urgent tasks is to figure out how to support young people.”

As Puerto Rican youth moved the project forward, women were the driving force.

Sarabel Santos made sure women were included in the project, triggering “solidarity and collaboration among women, making them feel proud to participate in a project spearheaded by women.”

“For a long time, I had heard about social economies and bartering systems, and just hoped that one day we would see something in Puerto Rico,” she said.

When given the opportunity, she jumped in.

“We have been undergoing a long economic crisis. Hurricane María proved that the local and federal government are untrustworthy. VALOR Y CAMBIO brought hope, in a time when most was lost. I believe that farmers and elaborators can organize to create a local currency, which can meet the specific needs within the market. As it is, most of us exchange goods, harvests and sometimes services,” Muriel said. 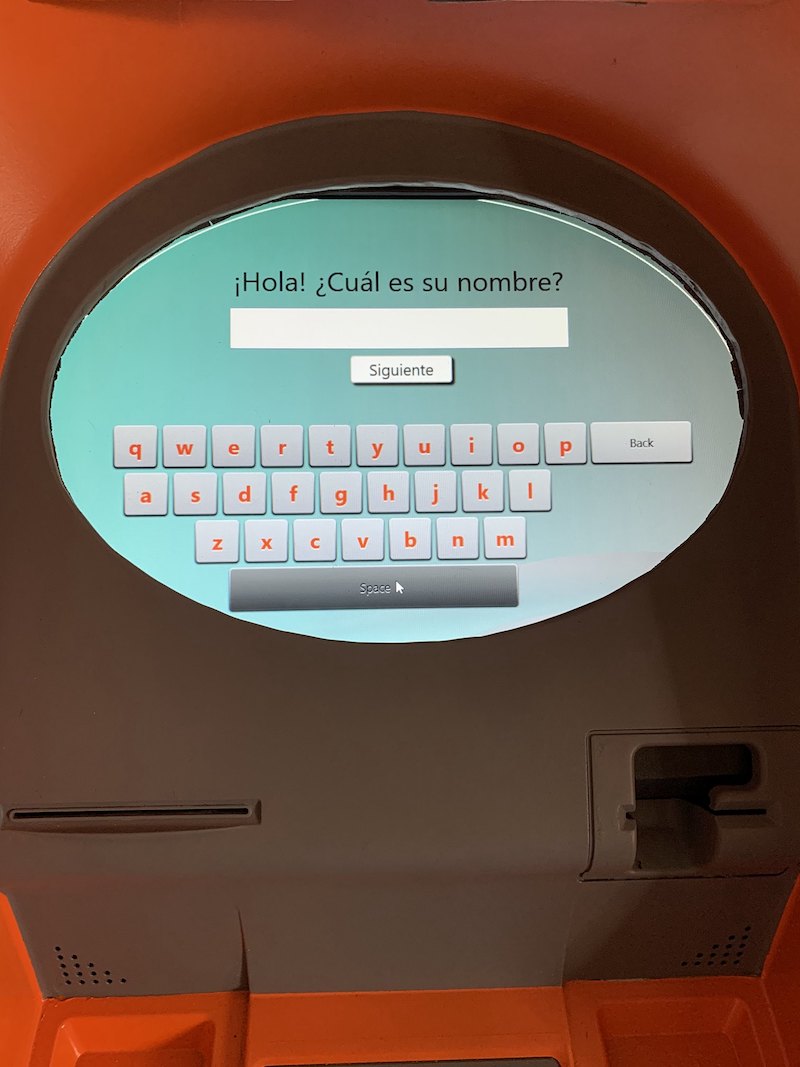 While the project lasted only nine days, VALOR Y CAMBIO is just starting. The next phase is to share the data and reflect on the process. This includes the following: reporting on the recordings, a documentary about the experience, and public activities with educational forums.

If PROMESA is a law imposing austerity on the island colony, the VALOR Y CAMBIO peso could eventually represent an alternate economic promise for Puerto Rico.