From Street Vendors to SXSW Stars: How a Group of Salvadoran Women Fights Machismo Through Theatre 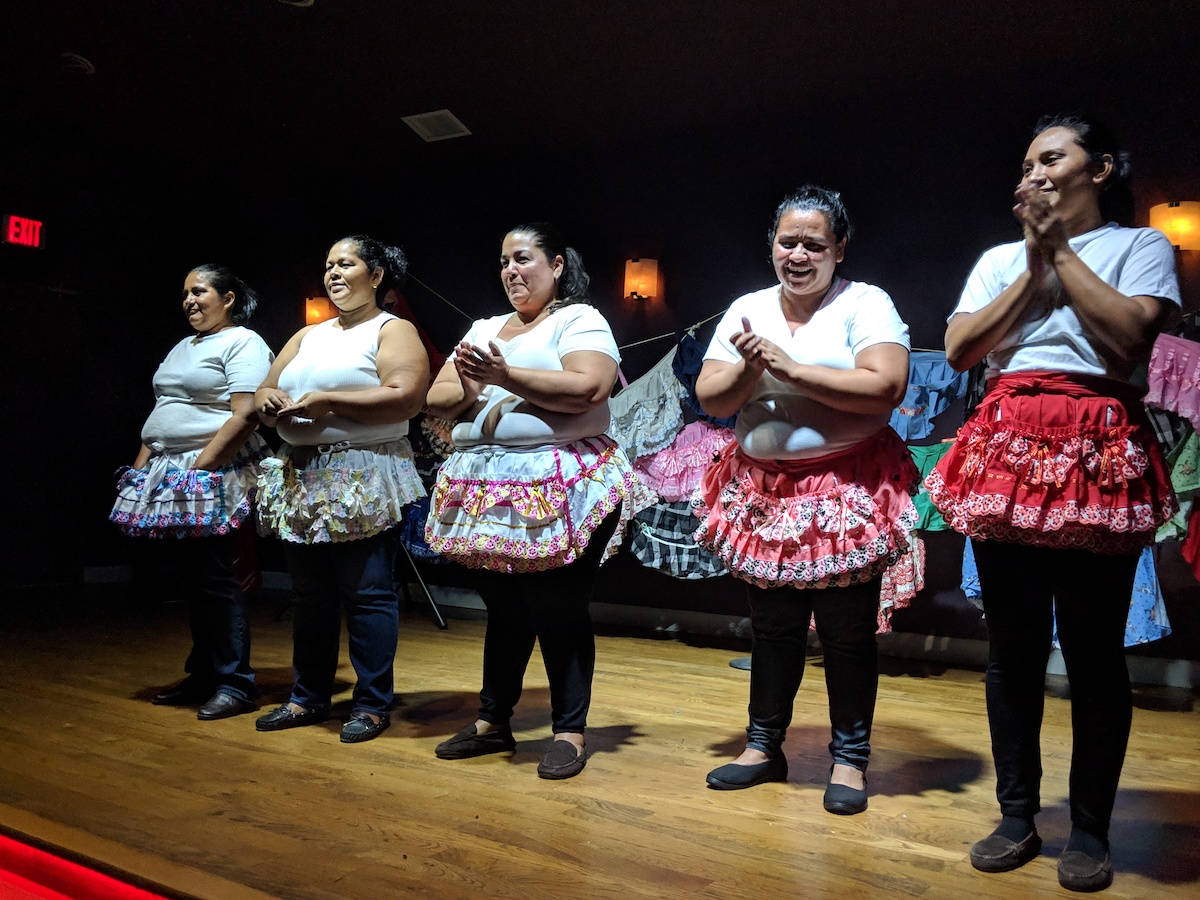 AUSTIN — Ruth, Wendy, Magda, Chileno and Magaly are five Salvadoran women who started their own theatre company and aspired for a better life in a male-dominated culture. Together, the former street vendors turned actresses created La Cachada Teatro, a theatre group that provides social commentary on how El Salvador treats its women while providing a creative outlet. The single mothers tell stories of their struggles and victories by performing them on stage.

Their story was so compelling it caught the eye of film director Marlén Viñayo. She watched how the women changed the way they dressed, the way they spoke and their outlook on life. Viñayo captured the beginning stages of their evolution in her documentary “Cachada: The Opportunity,” which premiered at Austin’s annual South by Southwest international film festival on Sunday.

The women traveled to Austin for the premiere and performed a free show for the public on Monday. The crowd, which included diaspora from several Latin American countries, was in tears minutes into the performance.

As fulfilling as the audience’s reaction and the film’s premiere was, the women said the greatest thing to come out of joining the theatre group was newfound strength and confidence. They are on a mission to break the cycle of violence against women in El Salvador. They said every show and every speech are an attempt to disrupt the status quo in their home country and give their children the possibility to work toward their own dreams.

“These stories are based on the women’s autobiographies,” theatre director Egly Larreynaga told Latino Rebels. “I invite you to disconnect and return to the streets of San Salvador. To the homes, to the vendors, to the markets and to realize that even though these are tough stories to listen to, they also show us it’s possible to escape the chaos.”

Monday’s performance hit on important issues Salvadoran women face, including sexual abuse and the challenges of hard labor that pull them away from their small children late into the night. The women confided their deepest fears and aspirations to one another. Some admitted they have been hardened by life and repeated the cycle of violence because they didn’t know any better. They no longer hit their children because that’s what their parents did to them. They don’t let men abuse them because their mothers were submissive when they were growing up. They hope for and demand better. 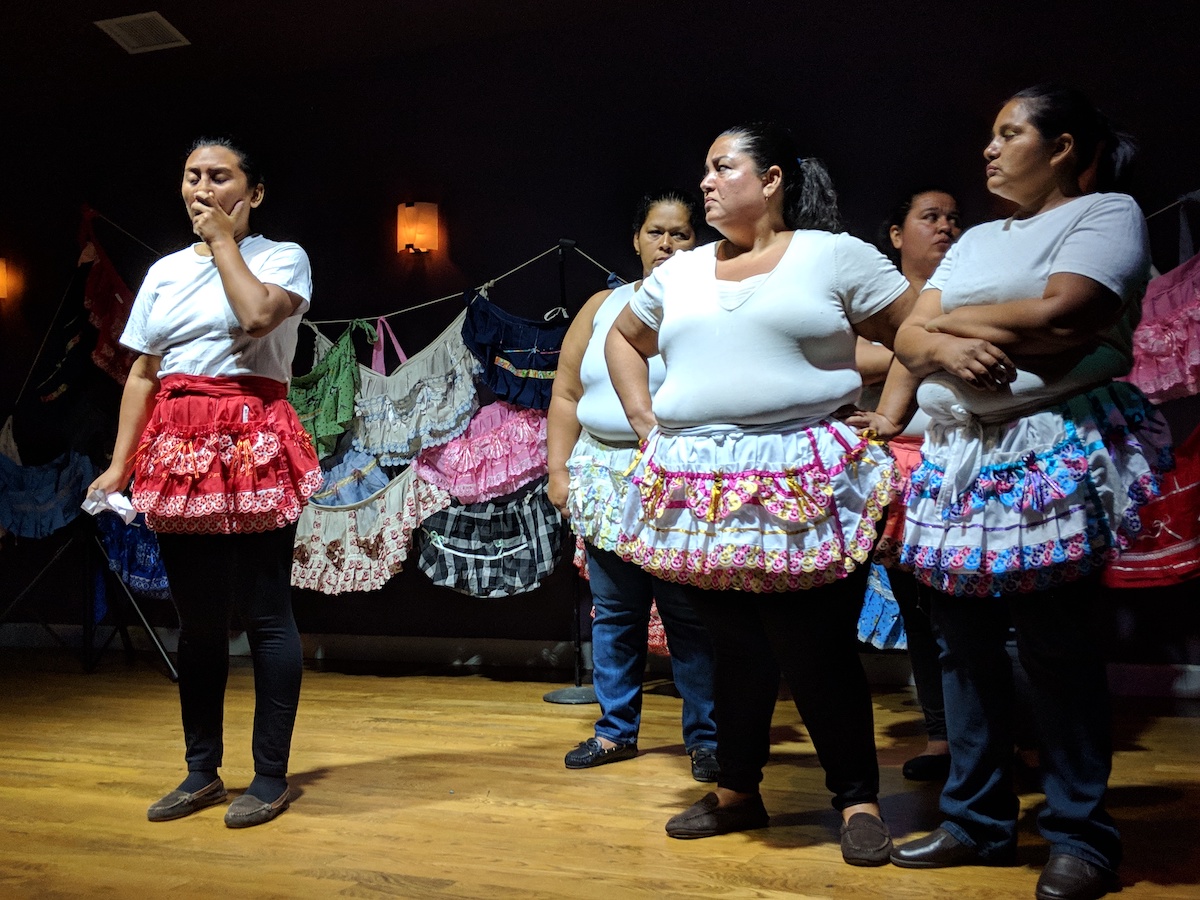 During the La Cachada Teatro performance in Austin on March 11, 2019 (Photo by Christine Bolaños/Latino Rebels)

Today, theatre is the troupe’s main source of income. All but one have stopped working as street vendors and most do domestic work on the side. They say theatre is the type of work they can look forward to when they wake up.

“We’ve stopped repeating cycles, we’ve stopped hitting our children and have established new relationships with them,” Magdalena “Magdy” Henríquez told Latino Rebels after the show. “It’s one of the most important things because that allows them to be more confident in themselves, in us and to teach them to dream as well.”

The women in their hometown of Mejicanos are also armed with knowledge of their rights and are more willing to stand up for themselves. The same is true for women in various Salvadoran communities who have come to know about the theatre group.

“They look for me when police come into their house and insult them and want to hit them. We know how to talk to them by being armed with knowledge of our rights as citizens,” Henríquez said. “The things they can do and the things they can’t do.”

Her sister Ruth Vega, also from Mejicanos, said she used to be a bitter and violent woman before finding her creative outlet.

“Theatre made me reflect on my actions and realize it was wrong to hit my children,” Vega said. “I didn’t talk to them. I didn’t listen to them. It was like I let out all my frustrations on them. I recognized that and changed my behavior through the theatre process.” 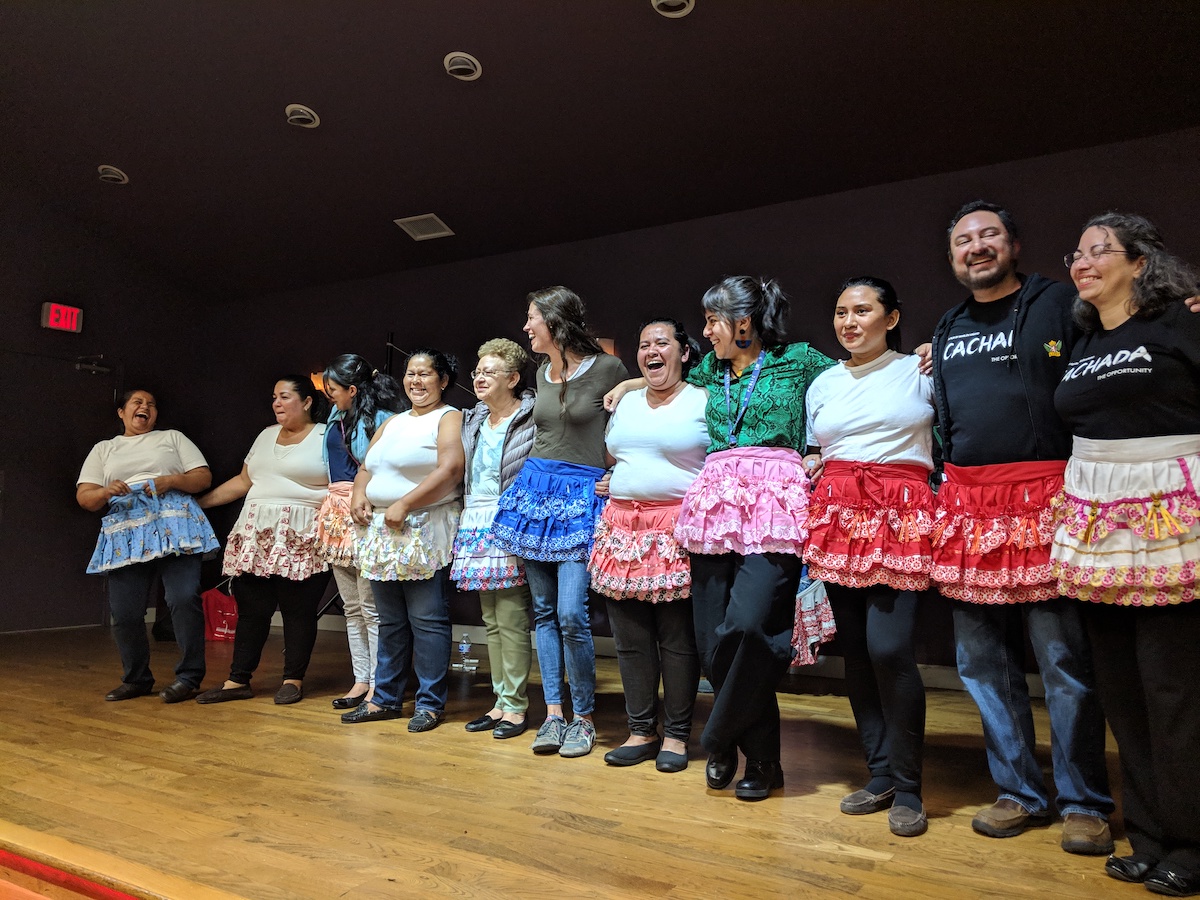 Members of La Cachada Teatro and filmmakers in Austin on March 11, 2019 (Photo by Christine Bolaños/Latino Rebels)

She has healed her relationship with her children and improved her self-esteem. She can talk to her children about sex and sexual orientation, both topics she previously thought of as taboo.

She can now look at people in the eye.

“I know my potential. I know I can have goals,” Vega said. “I’m not just a woman brought into the world to procreate and work.”

The Sky’s the Limit

The sisters also said they were looking forward to the encore documentary screenings this week. The last screening was scheduled for this Friday morning at SXSW.

“Cachada: The Opportunity” follows the making of the theatre group’s first show which centers on motherhood. They are now working on a new show and are looking forward to a potential international documentary film tour.

They said they are gratified and proud their lives have improved from time filming wrapped up.

“There were tears of emotion while watching, of knowing how far we’ve come thanks to theatre and all we have yet to do because the sky is the limit as they say,” Henríquez said.

*Note: Quotes were translated from Spanish to English.*