107 Detained in Anti-Government Protests in Nicaragua 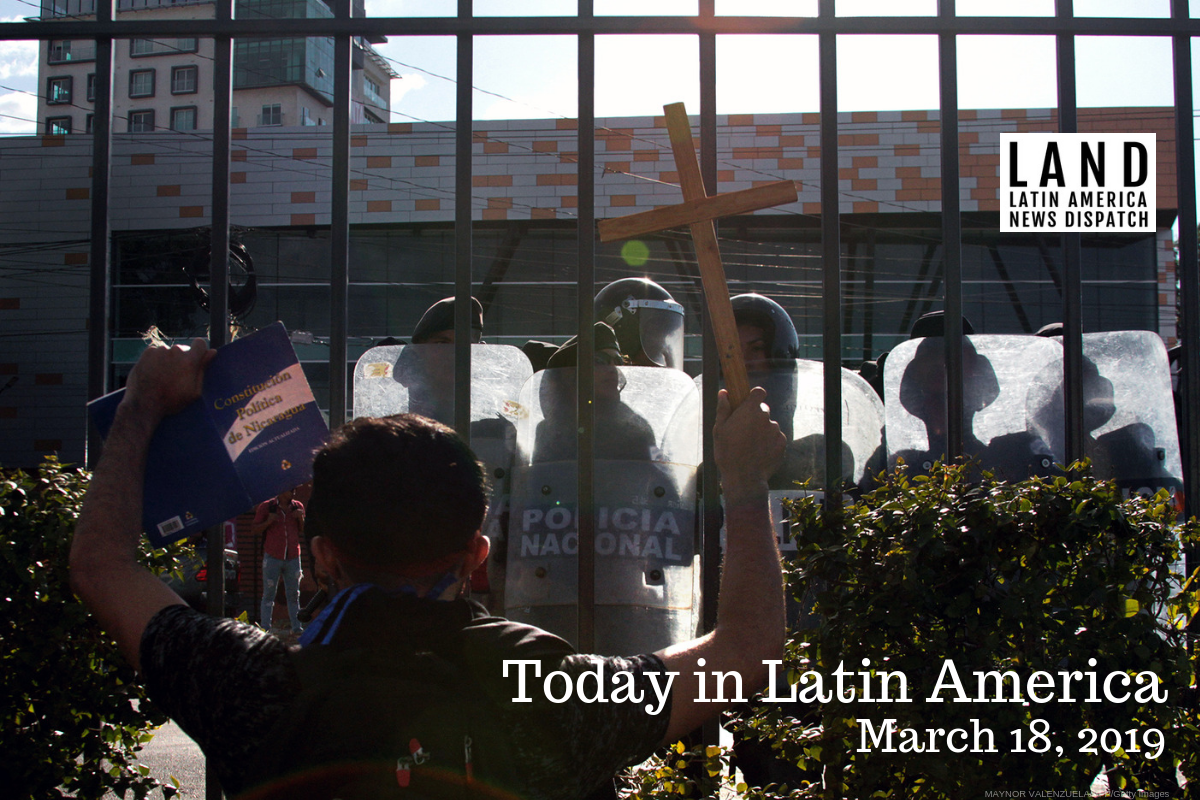 An opposition protester shows the Nicaraguan Constitution to riot police from a shopping mall where he and others took refuge after they were prevented by the police from demonstrating, in Managua. March 16, 2019. (Photo by Maynor Valenzuela/AFP/Getty Images)

NICARAGUA: On Saturday, 107 people were arrested for participating in demonstrations against President Daniel Ortega. Despite demonstrations being banned in September 2018, protesters took to the streets to demand the release of more political prisoners before the peace negotiations continue. At the request of the Vatican’s ambassador, Nicaraguan security forces later conferred that they would release the 107 detained protesters. On Friday, the Ortega regime released over 50 dissidents that had been held captive upon the request of the opposition, known as the Civic Alliance.

Since the first anti-government student protests erupted in April 2018, more than 300 people have died while mobilizing. More than 560 are allegedly being held in government custody, and at least 52,000 have sought asylum in neighboring countries due to the growing violence against activists, outspoken journalists, and protesting citizens.

BORDER: President Trump issued the first veto of his presidency on Friday, after both the House and the Senate rejected the president’s emergency declaration to fund the border wall. Trump held a public meeting in the Oval Office to sign the veto, saying, “Congress has the freedom to pass this resolution and I have the duty to veto it.” The fate of the emergency declaration and border wall funding will now be decided in the U.S. court system.

MEXICO: A Mexican journalist was shot and killed in his residence in northwest Mexico on Friday evening. Santiago Barroso, 47, hosted the radio program San Luis Hoy, directed the news site Red 563 and contributed to the newspaper Contraseña in his home state of Sonora. Both the state attorney’s office and free speech advocacy group Article 19 have opened investigations into this death, which is the fourth media-related murder in Mexico this year.

MEXICO: According to recent reports, nine women are murdered every day in Mexico. Undersecretary for Democratic Development, Social Participation, and Religious Affairs for the Ministry of the Interior Diana Álvarez Maury cited the number at a National Development Plan meeting that took place over the weekend. Álvarez Maury called it a “painful reality.” The statistic comes from a 2018 report by UN Women, which also found that six out of ten women have been victims of violence.

CUBA: The U.S. State Department is terminating five-year tourist visas for Cubans, which will force many Cubans to make a pit stop in another nearby country before visiting the United States. This will affect Cubans who frequently travel to the United States to visit family or stock up on inventory for their businesses. According to the U.S. Embassy’s charge d’affaires, Mara Tekach, the change is being made in an effort to level the playing field between visa rules for both countries, as Americans currently receive single-entry tourist visas for only up to three months. The change is effective today.

GUATEMALA: The electoral campaign officially starts today in Guatemala. A total of 26 political parties are vying for control of 340 municipalities across the country, 160 seats in Congress and 20 in the Central American Parliament. Elections will take place on June 16, 2019, but the number of presidential candidates still remains uncertain. Due to new reform of the Electoral and Political Party Law in 2016, these parties will have up to three months to seek support from Guatemalan citizens and convince them that they are the best party to govern the country.

HONDURAS: A South Korean-funded solar energy project is providing electricity to 6 out of 18 departments in Honduras. Solar panels will be installed in homes, schools and hospitals by the members of the national government. Honduran President Juan Orlando Hernández participated in the installation of the photovoltaic units on Friday, which will bring renewable energy to as many as 21,036 homes in rural towns.

VENEZUELA: On Saturday, opposition leader Juan Guaidó began a domestic tour to raise support for the ouster of President Nicolás Maduro with a speech in the northern city of Valencia. The self-proclaimed interim president of Venezuela spoke to large crowds, stating that the opposition is “stronger than ever.” In the same day, the government organized pro-Maduro demonstrations in the capital of Caracas. Meanwhile, a German freelance journalist was ordered released by a Caracas court on Friday after he was jailed for months by the Maduro regime under charges of espionage. According to German authorities, Billy Six left Venezuela from the Caracas airport yesterday.

ARGENTINA: On Saturday, the Argentinian Soccer Association (AFA) introduced plans to professionalize the national women’s soccer league. Women soccer players in the country previously played at the amateur level with little to no pay. Professional female players will now be paid a monthly minimum salary of $365, which is the same salary as male players in Argentina’s fourth division. In the press conference in Buenos Aires, AFA committed to contribute with $600,000 annually to the league’s development.

BRAZIL: Yesterday, President Jair Bolsonaro traveled to Washington D.C. to meet with President Donald Trump. This will be the Brazilian leader’s first trip abroad for a bilateral meeting since taking office in Jan. 1. The two populist conservative presidents are expected to discuss the crisis in Venezuela. Both of the two largest democracies in the Americas have recognized Juan Guaidó as the interim president of Venezuela. Bolsonaro also plans on signing an economic accord with Trump, which would allow U.S. companies to extract uranium and invest in nuclear power plants in Brazil.

CHILE: A floating island of solar panels is being tested by the mining company Anglo American to bring clean energy to a mineoutside of the capital of Santiago. Known as “Las Tortolas,” the 1,200-square-meter solar power generator floats in a lake of refuse from the Los Bronces copper mine. This past Thursday, Chile mining minister Baldo Prokurica inaugurated the project in a ceremony at the site of the clean energy pilot program. Officials said that if tests with the island are successful, the unique solar panels will be expanded to nearly 100 acres.