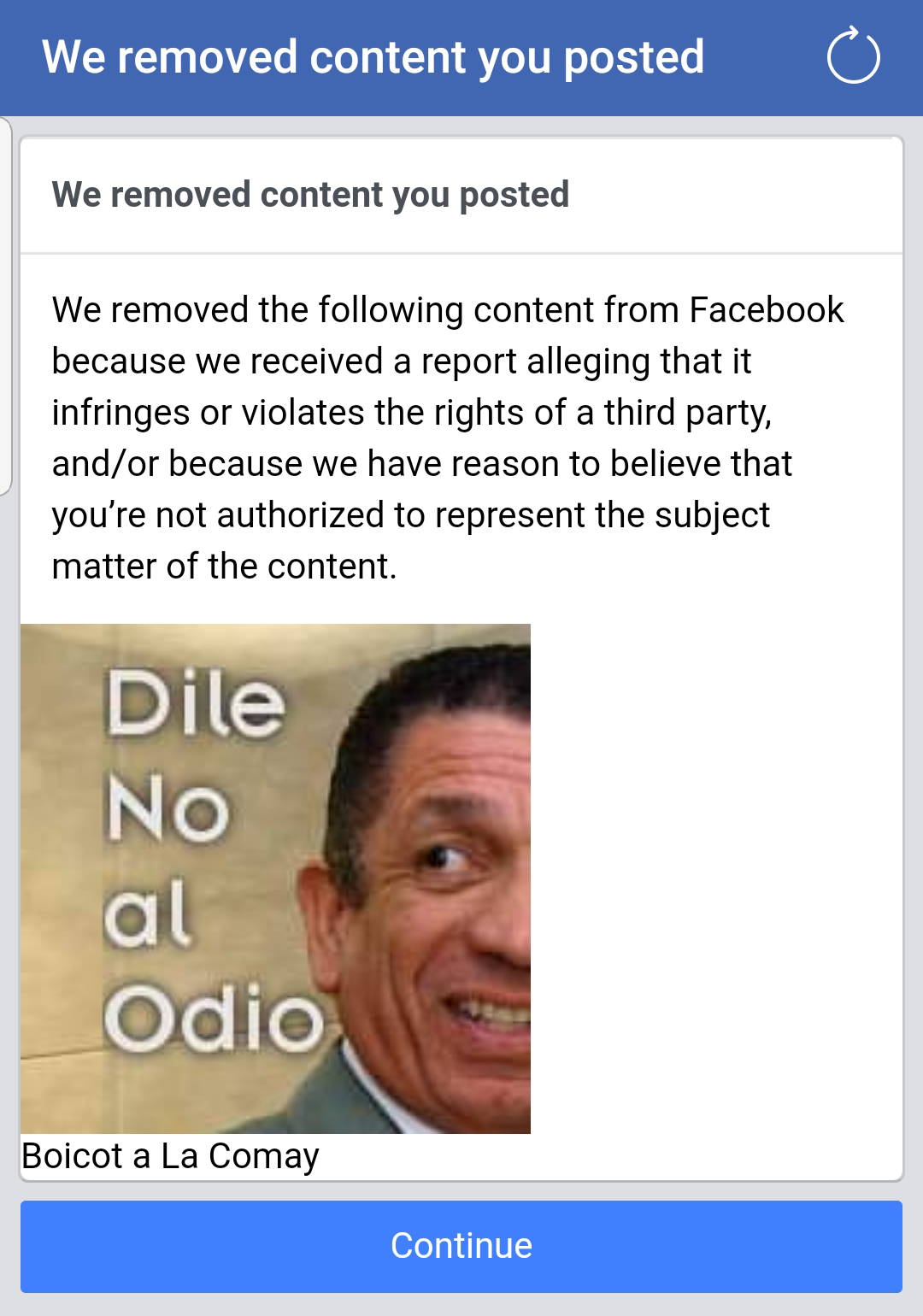 While the law requires them to assume good faith on reports and thus their action was not illegal, Facebook clearly didn’t even do a cursory investigation.

There is no violation of La Comay’s intellectual property. We do not use images generated by them at all, not even screenshots or videos from their content. Any links we posted of their content are hosted by their servers or WAPA’s or possibly MegaTV servers, who have the IP rights. In any case, any such content use would be firmly under Fair Use, as it has long been established that even commercial use of IP in order to criticize, satirize, and compare products is Fair Use.

On the other hand, we are grateful to Facebook for doing the right thing and that after a week down, on March 26, the Boicot page went back up. We hope they implement better processes to ensure this doesn’t happen again. We suspect that there might have been a language barrier involved in adjudicating, so we hope Facebook hires more culturally-aware Spanish speakers to be able to handle these requests responsibly.

It is my view that this represents a hypocritical attack on free speech and an attempt to exercise institutional censorship on the part of Concepcion TV, LLC, the producers of La Comay.

It shows how empty and false their claims of defending free speech and standing up for the right of free speech are when instead of engaging and recognizing a boycott as a legitimate form of speech, they seek to crush it via institutional means and not the public sphere of debate and customer choice.

From day one, my position and that of the founding team is that the boycott we promoted was to avoid all forms of censorship. We even told WAPA-TV at the time that their attempts at censoring SuperXclusivo were not what we wanted.

What we wanted was Kobbo Santarrosa to honor his word that he would cut back on hate speech entirely and avoid irresponsible talk about private citizens in unfortunate situations, victim blaming, and harassment of public figures.

And the means we used to exert pressure were not censorious either.

We didn’t support calls for FCC complaints, for example, nor did we report their content in social media as hate speech. We instead raised the debate in public using our free speech against their free speech to make the argument that people shouldn’t fund SuperXclusivo and that spending money on the advertisers’ products was funding it. That is not censorship. That is customer choice, which is free speech.

It is simple: they and everyone are entitled to free speech, but no one is entitled to get paid for it. If La Comay were a free volunteer effort, we wouldn’t bother. It is a profit-making effort, and making money out of hate speech requires our free speech to demand it not be funded.

I believe this shows that the fact the relaunched MegaTV program has so far avoided the behavior that got them cancelled in the first place is largely due to the historical memory of what led to the cancellation in the first place.

Trying to take down the page is an attempt to remove the perceived threat it represents as part of an effort to restart their old behavior in the hopes this helps regain their previous dominance of the audience ratings.

The fact that so many years later they still feel this way shows the power of what we achieved with the boycott, and its enduring ability to be a reminder that there are lines not to be crossed without consequences.

Lastly, Concepcion TV’s counsel should advise them that false representation of DCMA claims is both a civil and criminal matter, and so is personal harassment. Their ill-advised report so far has no consequence, as the page is back up. But they should reconsider any strategy based on illegal censorship. 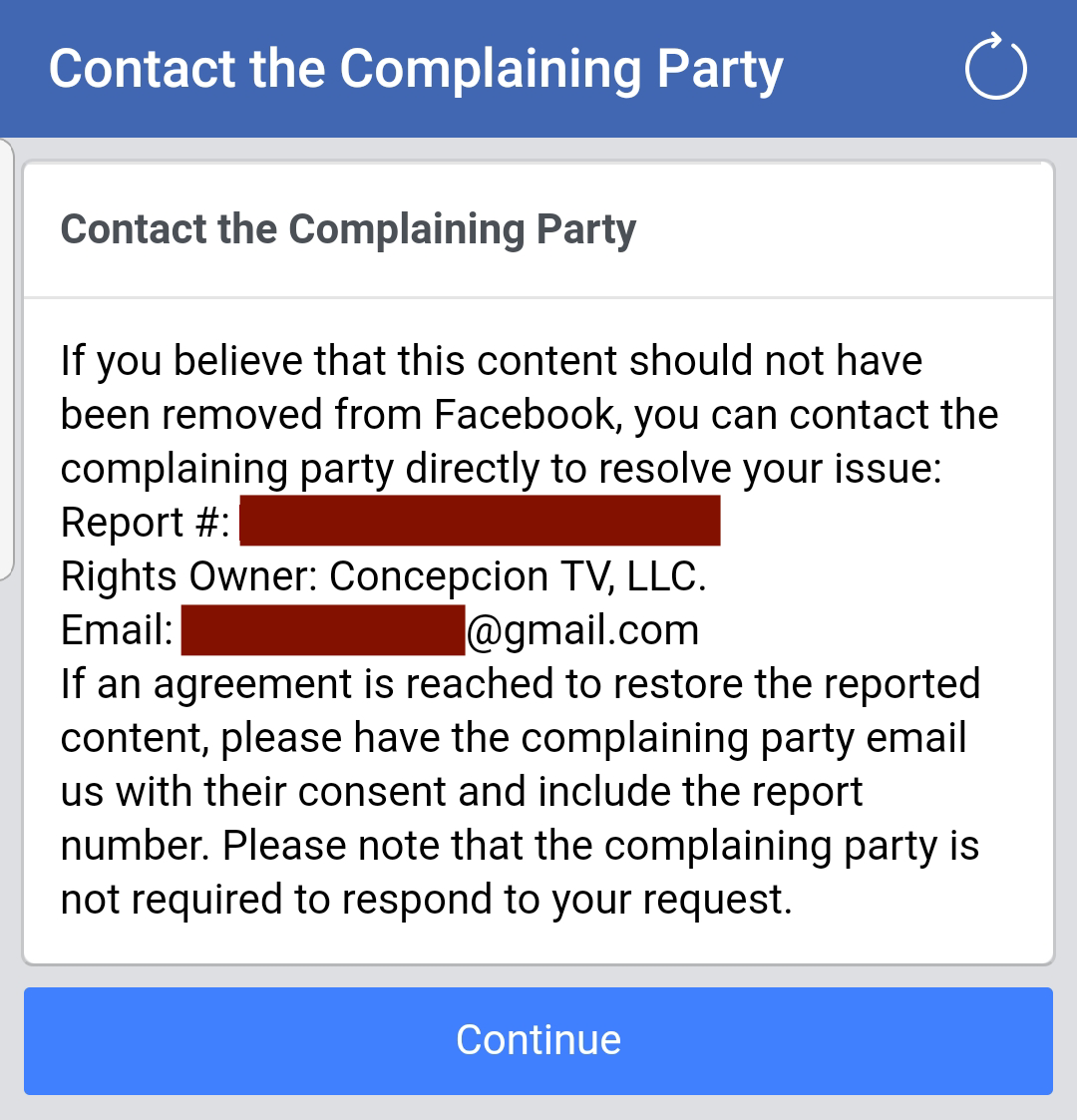 They should read and understand Diehl (10 Zen Monkeys) v Crook. Just because we are talking about your Intellectual Property doesn’t mean we are violating it. And the likenesses we use are in any case from journalistic sources that have their own copyright, which we use under fair use.

We expect vigorous public debate, the free exercise of free speech from all ranges of opinion, but illegal means of seeking censorship will be responded by the legal exercise of our defense. They can spend millions, but pro bono is free, and we probably have Facebook on our side now, who probably are not happy their time was wasted with a false report.

They do well to choose not escalating. While certainly La Comay has fans that are entitled to their free speech, we are the many, they are the few.