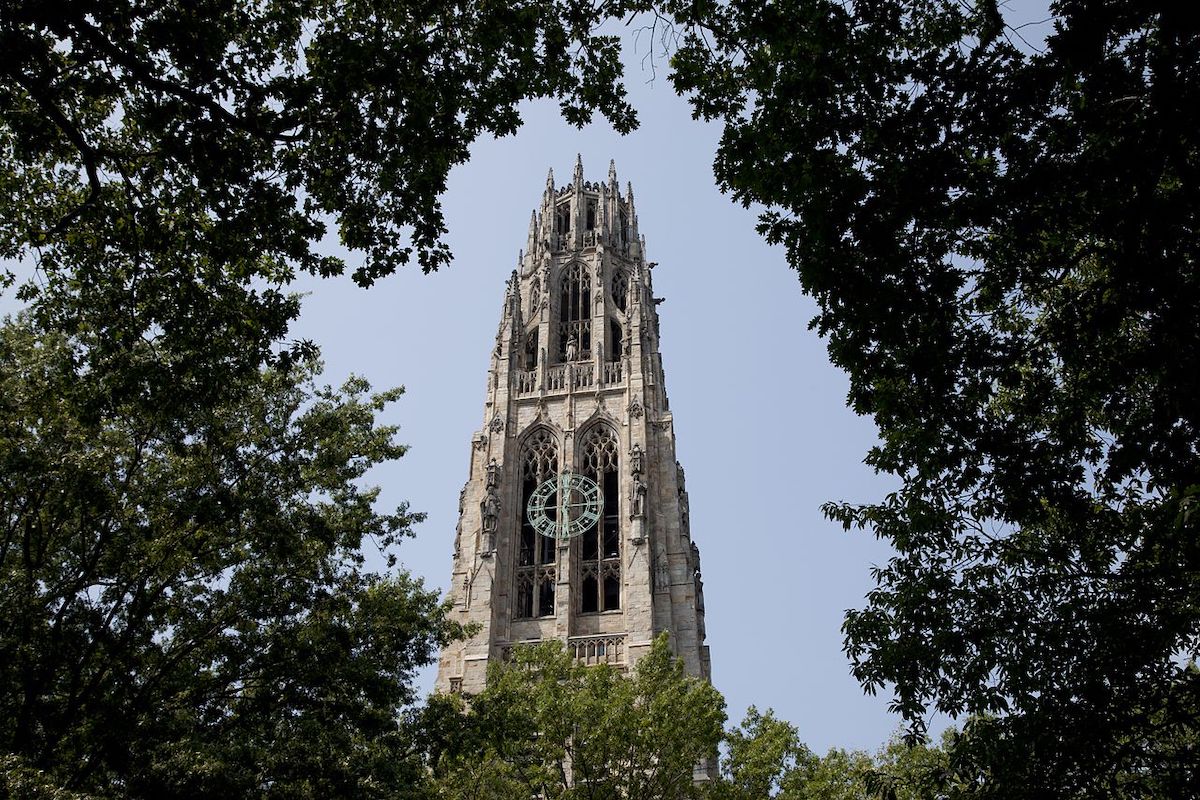 Yale tenured faculty working in the multidisciplinary field of Ethnicity, Race and Migration are tired of “volunteering their labor to support the academic unit” or, in other words, working for free.

Thirteen tenured faculty decided on Friday to withdraw from the University’s ER&M program, citing a lack of resources and stature to operate within the institution of higher education.

The move would leave the program without any tenured faculty or professional leadership, since the decision includes all the faculty who have served as ER&M chairs since the program was founded in 1997, four faculty with endowed chairs, two heads of residential colleges, and four current department or program chairs. It does not imply that the professors would leave Yale nor lose their tenure position though. They would return to the units they were formally appointed to.

The chair of the program, Alicia Schmidt Camacho, said that for two decades ER&M faculty have been assigned an irregular and precarious status within the University’s administrative structure. She also said that Yale had defaulted on promises made to the program and students regarding rights in hiring and appointment.

“The administration has maintained a system that fails to recognize our work and prevents us from participating in the tenure and promotion process,” she said on a March 29 statement.

In response, Yale President Peter Salovey regretted the announcement of the faculty members’ withdrawing, bemoaning the news had to come through a public letter and said that their work was appreciated. He also hoped an agreement could be reached that worked for everyone.

Salovey mentioned two new senior faculty were hired into the program in 2018 and said two additional senior faculty were expected to be hired this year, but the professors’ protesting claim Yale has not met their growing obligations to students or their respective research fields. They recalled instances from prior years —2011, 2015 and 2016— where the University leadership promised change to the status and funding of the program but failed to deliver.

Salovey said in his reply that new employment positions were in line with the $50 million pledge Yale took in 2015 to improve the diversity and excellence of its faculty, and said that since then and in the vein of that initiative, 60 new faculty had been hired across the University.

But two of the faculty members who wrote their letters of withdrawal spoke to the New Haven Register about a lack of transparency in how the $50 million dollars has been used and said that the ER&M program was never consulted about disbursement strategies.

Professor Daniel Martinez HoSang voiced his frustration in an email exchange with Latino Rebels. He said that they had not seen any evidence suggesting the funds had been used to address diversity issues pointed out in a 2014 Yale Diversity Summit report, in which the University acknowledged its systemic problems for faculty of color and called for a “renewed effort to address the challenge of recruiting and retaining diversity candidates.”

Having spent the prior decade working at the University of Oregon, he was shocked by the confusion of having internal documents contradict each other at Yale.

A faculty headcount from the fall of 2013 showed 9 percent of faculty in Yale was Asian, 3.5 Black, 2.8 Hispanic, 0.1 Native American and 0.3 Native Hawaiian or Pacific Islander. More than 70 percent of the faculty population was white.

When looking at the president’s cabinet, however, the disparity is much more apparent. 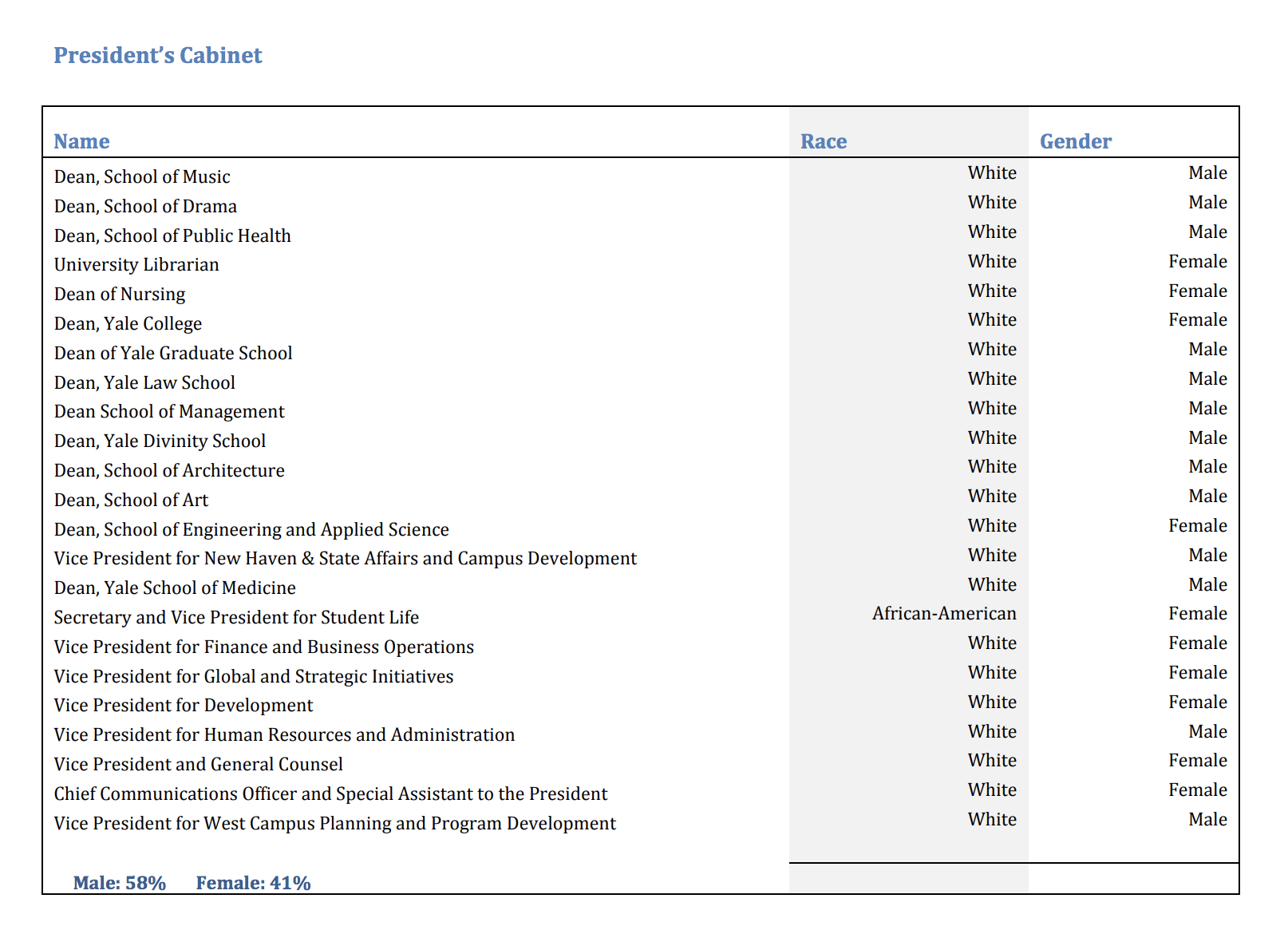 95.6 percent of the population was white, with only one non-white person working as Secretary and Vice President for Student Life.

More current demographics available on Yale’s site show that the percentage of white population hired as ladder faculty at Yale decreased significantly from 58.4 percent in 2005 to 38.2 percent in 2017. The numbers generally stayed almost the same though: 84 white people were hired in 2017, versus 87 in 2005.  During this same time frame, Asian American ladder faculty went from 17.4 to 11.8; Hispanic or Latino nudged from 3.4 to 5; African American moved from 2 to 4.1 percent, and curiously, the percentage of faculty members who in all likelihood checked the “wish to not identify box” went from zero in 2005 to 28.2 percent in 2017.

Some among the faculty expressed concern about this perceived loss of interest in diversity, given the current national and global landscape with white nationalism in the United States, a refugee crisis across three continents, climate change refugees and critical issues with immigration and detention, voting rights, policing and incarceration and racial violence.

The professors’ decision was backed by a group of students organized as the Coalition for Ethnic Studies and Faculty Diversity at Yale, and who are calling for the ER&M program to become a department. They set up a pop-up library showcasing the work of the professors announcing their withdrawal from ER&M.

The ER&M website indicates that majoring in Ethnicity, Race, and Migration at Yale offers students an opportunity to do systematic study “of the indigenous peoples of North America, and of the migration of peoples from Latin America to North America and from Asia to North America.”

But in an op-ed, two Yale undergrads, Oscar Lopez Aguirre and Diana Saavedra, said that ER&M could not work as a major, due to it being “a patchwork of classes and professors as opposed to a fully fledged academic department.” They also said that as a field of study, the major would offer students a space to do self-reflection and examine their histories in novel ways not available in the past.

The decision of withdrawal isn’t definitive, as protesting faculty are hopeful the administration will address the precarious and irregular status of ER&M in a way that will permit them to recommit their labor to the program.

HoSang said the senior faculty remain committed to ensuring that current juniors and seniors in the ER&M major can graduate with their degrees and that they would continue teaching and advising those students through next year.

Below is the full list of the professors who submitted individual letters of withdrawal: