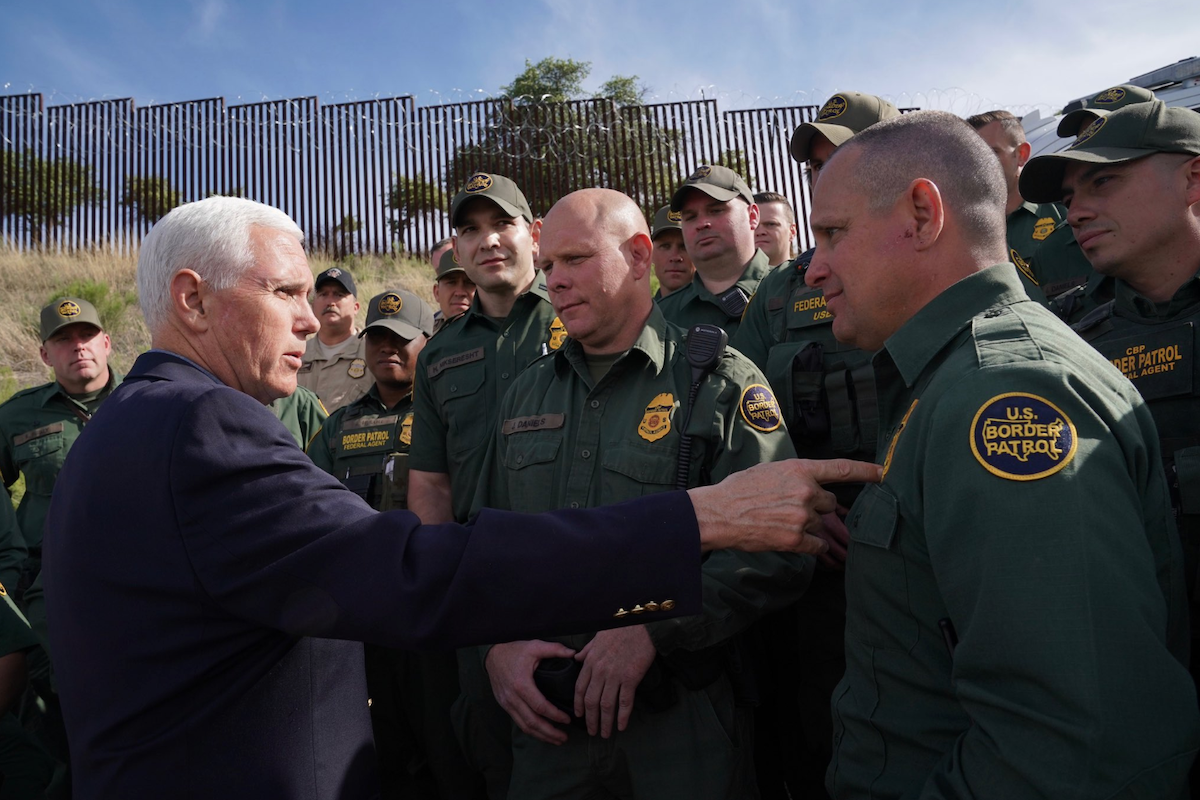 NOGALES, AZ — Last week, Vice President Mike Pence made a visit to the U.S.-Mexico border in Nogales. The visit that had been rumored to be in the works, but no confirmation was made until around midday on Wednesday when law enforcement was coached on what security measures should be taken prior to his arrival.

Locals had expected Pence to possibly tour the town and to take the time to talk to local officials, but to the disappointment of many, this was not the case.

“Vice President Mike Pence is coming to town, but unfortunately he won’t be meeting with any of us,” said Santa Cruz County Supervisor Manny Ruiz during the local chamber of commerce’s monthly government affairs meeting Thursday morning. “This is no surprise. We have a lot of politicians come through here, but very few stop to find out what we’re all about. And that goes for both sides of the aisle.”

There were those, however, who were happy about the visit, taking to social media to welcome Pence. The head of the local chapter of the Republican Party and veteran Steve McEwen said, “I am pleased to see our Executive branch is visiting Nogales on this very serious matter.  I agree we have a crisis.”

“I was grateful and excited to hear the news of Vice President Mike Pence’s visit to Nogales,” said David Calvillo of Nogales. “We hear people complain about our Washington elected officials and how they never come visit the borders to see them firsthand. Well, Vice President Pence did, and he spent time talking to the men and women who are on the front lines.”

As the Vice President’s arrival neared, local press scrambled to get security clearance from Border Patrol. It wasn’t until the last minute that they were informed that clearance had to come directly from the White House, allowing major national news organization to take up most of the limited spots available.

On his arrival, Pence held a brief press event at Davis Monthan Air Force base in Tucson, 60 miles north of Nogales, before heading south to the Nogales Border Patrol Station.

As Supervisor Ruiz had predicted, the Vice President did not meet with any local elected officials. Aside from Border Patrol agents working out of the Nogales field office and two reporters from the Nogales International. The only other local present for the visit was City of Nogales Police Chief Roy Bermudez.

Unsurprisingly, Nogales Mayor Arturo Garino was not invited to meet with Pence. Earlier this year, Mayor Garino openly challenged the administration over razor wire that was placed on the Ambos Nogales Border fence in November of 2018 by the U.S. military. Garino and the Nogales City Council issued an official proclamation stating their demands. The proclamation was then backed up by other city councils around the state and even received the support of Senator Kyrsten Synema and Congressman Raul Grijalva.

The visit proved to be more of a Border Patrol immigration rally than an actual visit to the border town. Most of the rhetoric used by Pence was to the point of justifying the temporary relocation of thousands of U.S. Customs and Border Protection (CBP) officers to ports of entry in Texas to address the increasing number of immigrants in that state. At each of the two stops made during his short visit, Pence touted immigration reform, stating that the previous Tuesday, CBP had detained a “record number” of over 43,000 “illegal” immigrants.

This mass reassignment of border agents, along with other statements and policies of the current administration, have caused record wait times at the Nogales ports of entry at pedestrian and vehicle gates for those entering the country legally as well as those who do business across the border daily. Nogales is a major U.S. port for fresh produce and manufactured goods. According to Lance Jungmeyer, President of the Fresh Produce Association of the Americas, these wait times are already beginning to affect those employed in those industries.

“We ask the administration to consider the hardship on the workers and employers who are being impacted by the border slowdown,” Jungmeyer told Latino Rebels. “It is harming the economy in a county that already suffers among the highest employment rates along the southwest border.”